Sara Scalia tallied 25 points for the Ponies, who have now won 16 consecutive games. 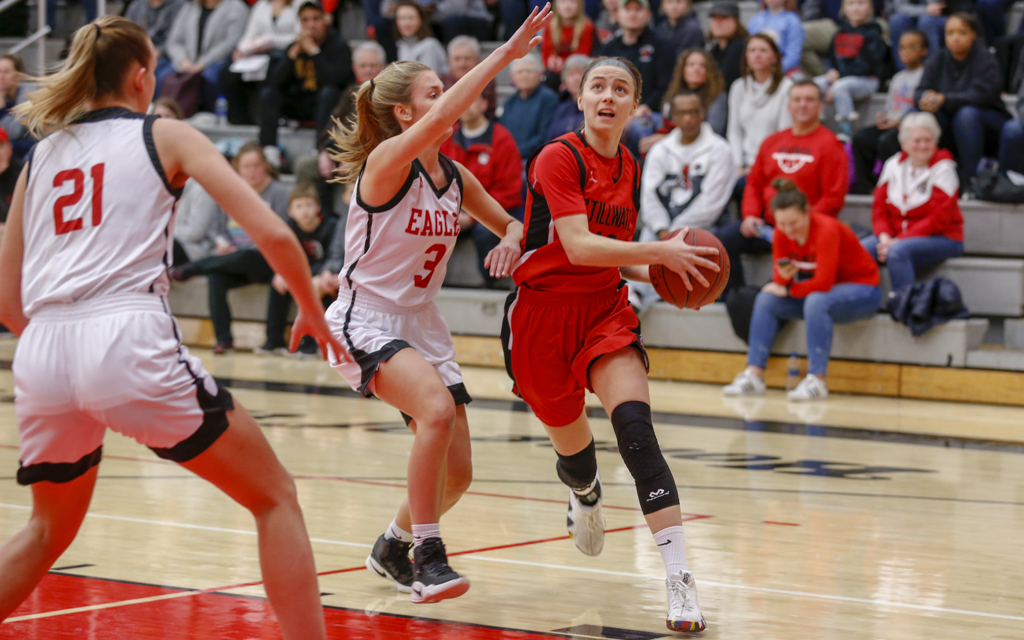 Stillwater's Sara Scalia goes up for two of her 25 points against Eden Prairie. The Ponies defeated the Eagles 78-63 Saturday night in Stillwater. Photo by Jeff Lawler, SportsEngine 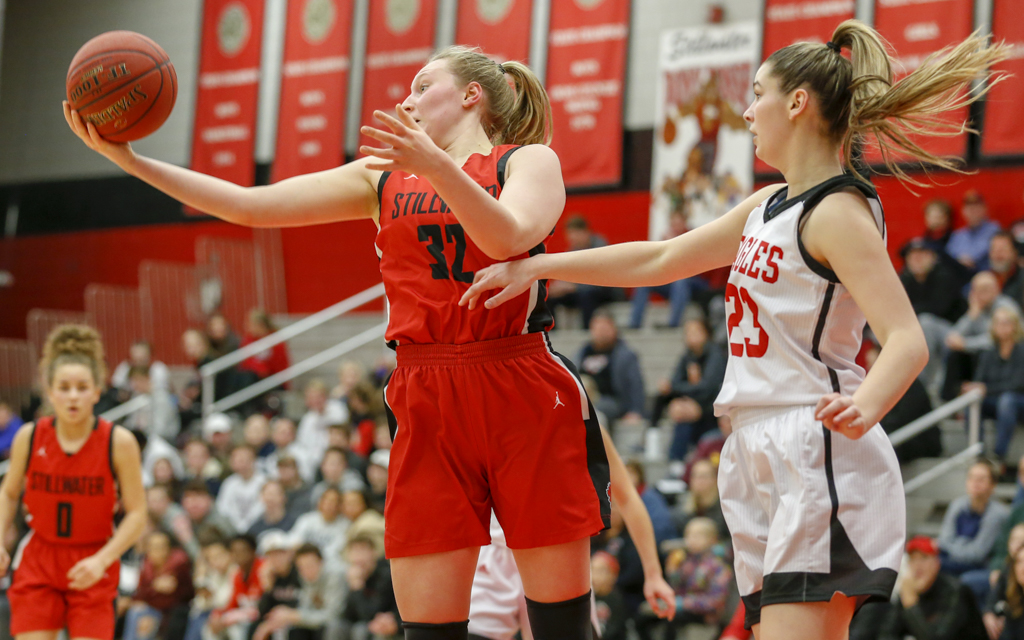 Stillwater junior Aliza Karlen pulls down a rebound against Eden Prairie Saturday night. Karlen had 14 points in the Ponies' 78-63 victory over the Eagles. Photo by Jeff Lawler, SportsEngine

The final seven minutes of Stillwater's 78-63 home victory over Eden Prairie bore little resemblance to the action that preceded it.

After 29 minutes, the two teams were locked in a 55-55 tie. The Ponies' leading scorer, Sara Scalia, was struggling to make shots. And the Eagles were handling Stillwater's full-court pressure well enough to stay in the game.

But Scalia, a senior guard who averages 22.8 points per game, started making her shots, and a devastating injury to Eden Prairie point guard Abby Jirele hamstrung the Eagles at both ends of the court.

The result was a 23-6 run by the Ponies to finish the game.

"In the first half it took us too long to figure out their style of play," said Stillwater junior forward Liza Karlen. "We knew we had to step it up in the second half, and we finally got it going at the end. We know how to finish, and hopefully we'll keep doing that."

Scalia, who has signed a national letter of intent to play at Minnesota, scored 14 of her game-high 25 points in the second half to lead Stillwater (21-2, 15-0), which is ranked No. 3 in Class 4A by Minnesota Basketball News. Scalia was one of four players to score in double figures for the Ponies: Alexis Pratt had 16 points, Grace Cote, a junior forward, 15 and Karlen 14.

Eden Prairie (17-6) was led by Nneka Obiazor, who had 19 points and 15 rebounds. Natalie Mazurek scored 11 points and Abby Johnson added 15 for the Eagles, who used their height advantage to post early leads of 7-2 and 17-10.

It didn't help that Stillwater — and Scalia in particular — struggled to make three-pointers from the start. The Ponies missed their first six three's of the game, while Scalia was 1-for-8 from behind the arc in the first half.

"You have to stay confident through that and trust your shot," Scalia said. "I knew my team had my back in the first half and they kept it close. In the second half we played well together — and my shots started falling."

The Ponies stayed close in the first half in large part because of Karlen, who had 10 points in that period to made sure Eden Prairie led just 31-30 at halftime.

"She did some nice things handling the ball, taking the ball to the hoop, and she did a good job defending inside," Stillwater coach Willie Taylor said of Karlen.

None of the Ponies panicked over Scalia's shooting struggles, and she started heating up in the second half.

"No, I was never worried. Sara can shoot the basketball," Taylor said. "At some point they're going to start dropping, and when they rain down, it's going to rain hard. I knew she would start knocking shots down."

Karlen agreed, adding, "When Sara comes out cold, you always know she will heat up. She's a player who doesn't let missing shots get into her head."

But the game remained close — there were nine lead changes in the second half alone. Then Jirele went down with an apparent knee injury with 13:02 still on the clock and had to be carried off the court. The Eagles stayed close for a time after the injury, but coach Ellen Wiese was not surprised her team eventually struggled.

"[The injury] made it hard, not only that she wasn't out there, but that all of our minds were on her — I know mine was," Wiese said. "The game becomes so secondary to the health of one of your kids at that point.

"If you take the starting point guard off any team, they would struggle."

The struggles came via 10 second-half turnovers for Eden Prairie as well as a switched defensive assignments that allowed Stillwater's Pratt and Scalia to drive to the basket and create easy scoring opportunities for themselves and teammates.

"I had Abby Jirele on Pratt and Brooke Lewis on Scalia, and I thought that was effective defensively," Wiese said. "You're not going to stop [Scalia], but we contested everything. Then when Abby went down, I had to shift Brooke to Pratt, and we didn't have an answer for Scalia."

The Ponies took advantage with an eight-point run to jump-start that 23-6 finish, eventually claiming the win that extended their current win streak to 16 straight games.

Stillwater outscored Eden Prairie 23-8 over the final seven minutes of the second half to earn a 78-63 nonconference victory at Stillwater High School on Saturday evening.

Stillwater (21-2, 15-0) got 25 points from senior guard Sara Scalia, a University of Minnesota commit who is the team’s leading scorer at 22.8 points per game.

Struggling from beyond the arc in the first half, Scalia shot 0-for-6 from three-point range early. She had 11 points at halftime, with her team trailing 31-30. Scalia, however, found her touch in the second half, with her making three of her first four attempts of the half, including a three-pointer.

For the Ponies, who are ranked No. 3 in Class 4A by Minnesota Basketball News, three players other than Scalia scored in double figures, with Alexis Pratt tallying 16 points, Grace Cote dropping 15 and Aliza Karlen adding 14. 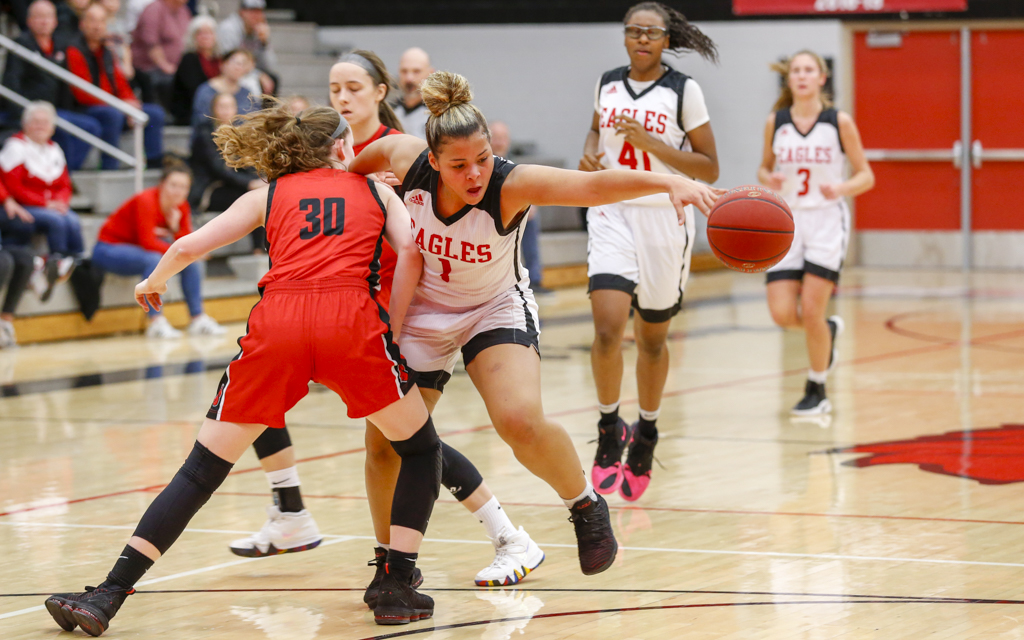 Eden Prairie's Nneka Obiazor is fouled on the way to the basket by Stillwater's Delaney Wagner. Obiazor had 19 points in the Eagles' 78-63 loss to the Ponies. Photo by Jeff Lawler, SportsEngine