Roseville takes over in second half, downs Forest Lake in overtime

Jayda Johnston scored 18 points for the Raiders to lead all scorers. 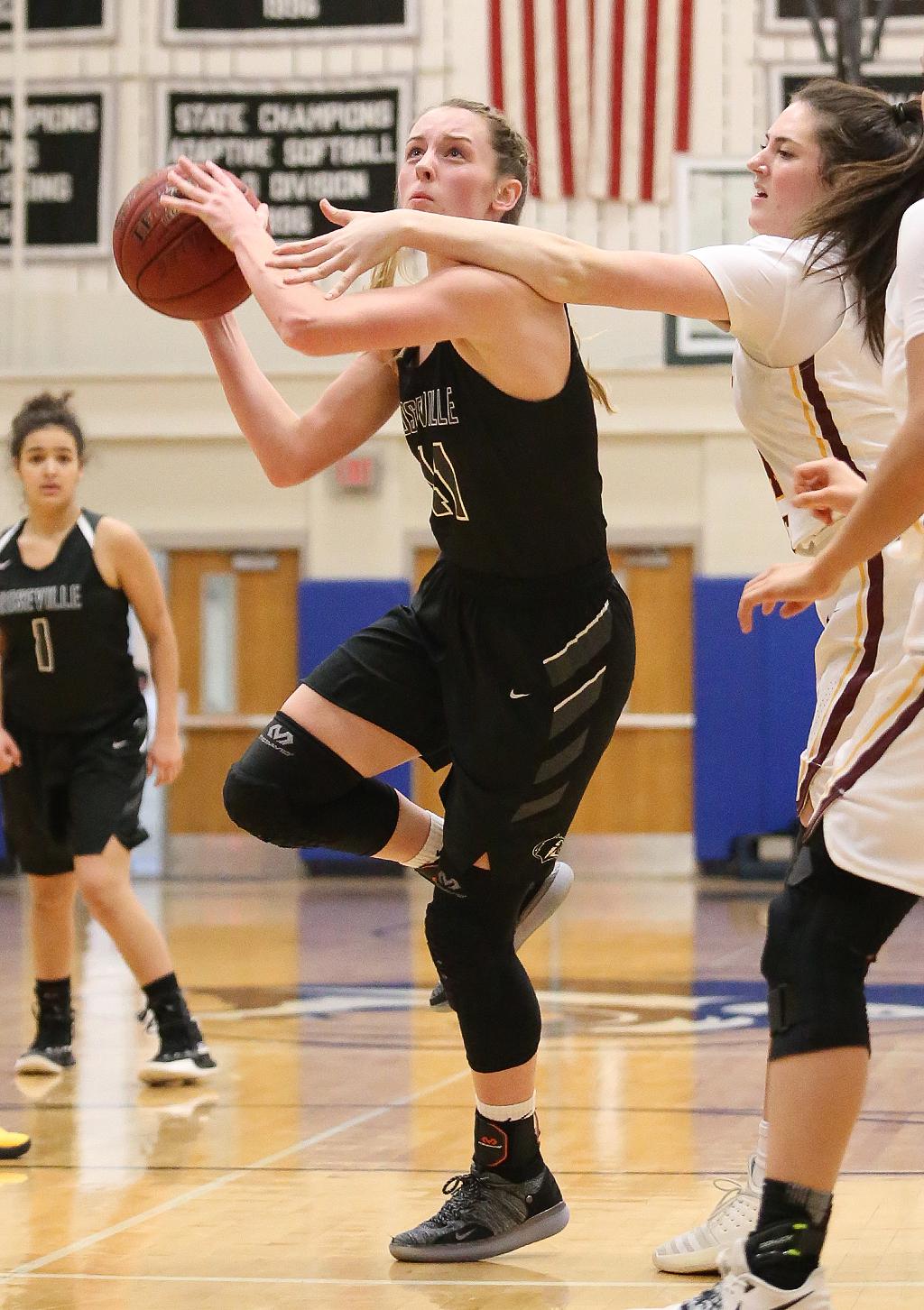 Jayda Johnston drives the lane early in the first half. Johnston exploded in the second half adding 14 of her game-high 18 points to lead Roseville to a 52-47 win over Forest Lake in overtime. Photo by Cheryl Myers, SportsEngine 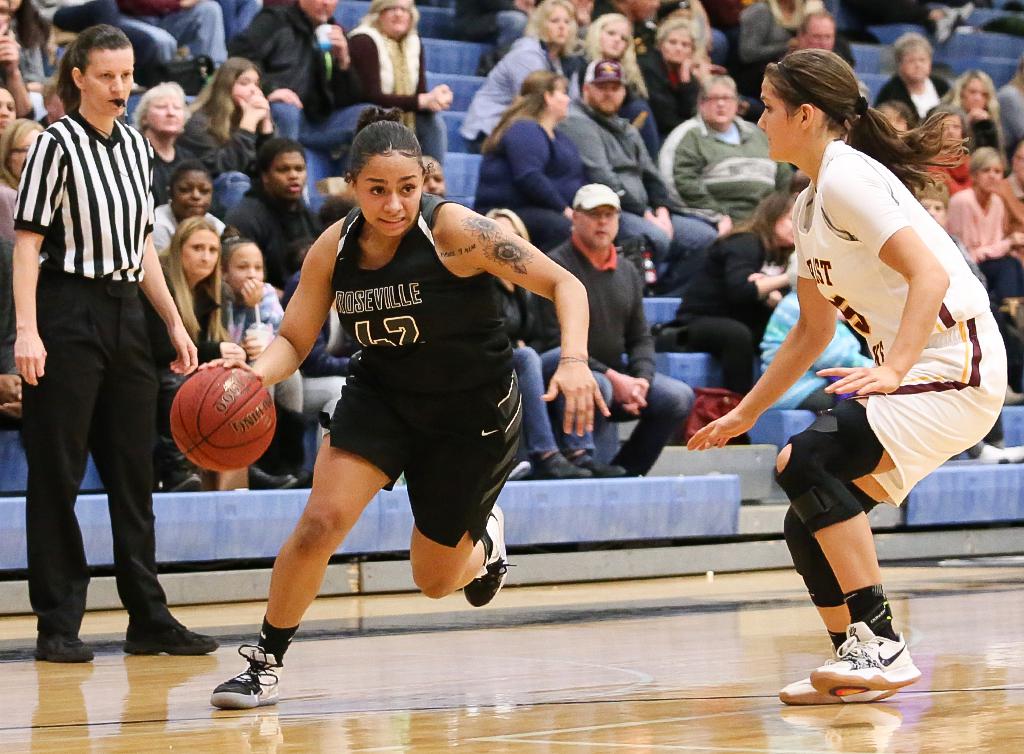 Jada Hood (42) drives around defender Maddy Rice (25). Hood led scoring in the first half with nine points but left the game in the second half, watching from the bench as Roseville defeated Forest Lake in overtime. Photo by Cheryl Myers, SportsEngine

Seeing a three-pointer made by Roseville junior Jayda Johnston might have been a relief for her school’s fans who filled the stands Friday night.

But for Johnston, her three-pointer with 50 seconds left in overtime was not an opportunity to rest after taking a 48-46 lead.

"I was happy," said Johnston, who scored 18 points in the victory. "The time wasn't up, but I figured that was going to help us win the game."

Johnston's basket ended up being the edge the Raiders needed in a 52-47 victory over rival Forest Lake at Roseville High School. After neither team led by more than seven points, the game seemed destined for overtime. 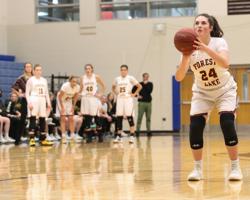 Although the Raiders came out on top, everything did not go perfectly for them. Jada Hood, the team’s leading scorer with nine points in the first half, missed the second half with an injury. Roseville also hurt itself with turnovers at the end of regulation and the start of overtime.

But the Raiders, ranked No. 7 in Class 4A by Minnesota Basketball News, made enough plays and knocked down enough free throws to pick up the win.

"The biggest thing, just the resiliency," Roseville coach Jeff Crosby said. "We talked about end-game situations offensively, we did like everything wrong."

Roseville (11-2, 3-1) now holds a half-game lead over Forest Lake (11-3, 3-2) for second place in the top-heavy Suburban East Conference. Both teams are looking up at No. 3-4A Stillwater, which has already recorded wins against both Roseville and Forest Lake.

For the Raiders, a win against the No. 10-4A Rangers felt even better.

"This was nice, this win here," Crosby said. "Because versus Stillwater and versus Wayzata, we lost at home against top-10 teams."

Both teams in Friday's Suburban East tilt had the chance to play in the Class 4A state tournament last season. Up-and-coming Forest Lake finished 15-13 in the regular season before beating Anoka 54-45 in the Section 7 championship game. Roseville, meanwhile, beat Park Center 61-45 to clinch a Section 5 title after putting together a 19-win regular season.

Friday's win happened to be the first overtime game for Roseville this season. After coming out on top, they are now even more confident in their abilities as they continue a challenging schedule.

"We go hard at practice every single day," Johnston said. "We train for things like this. I felt really prepared and confident in my teammates, and myself and the coach." 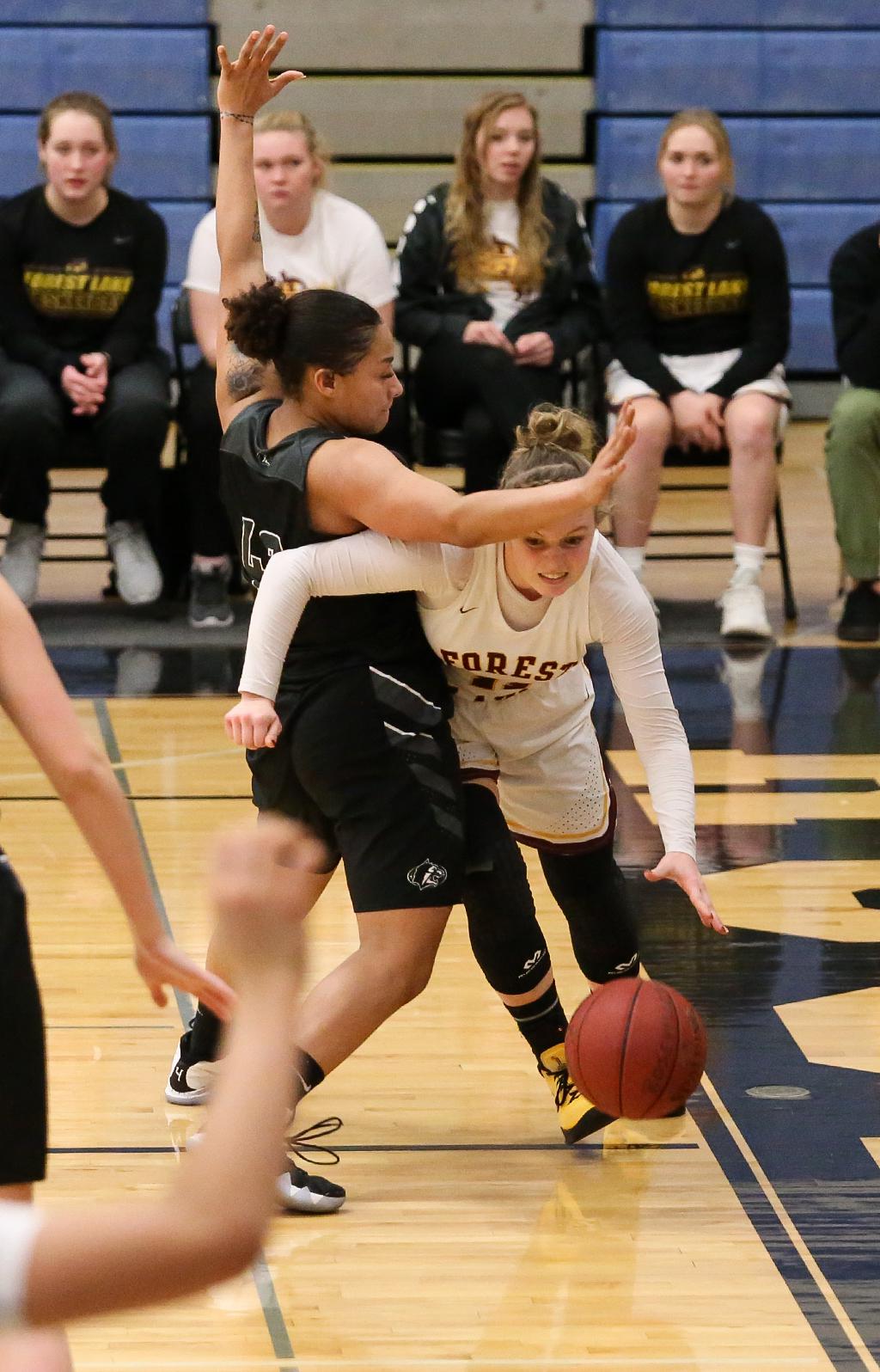 Lexie Hultman (11) forces her way past Jada Hood along the baseline. Hultman led the Rangers' scoring with 10 points in a 52-47 loss at Roseville High School. Photo by Cheryl Myers, SportsEngine

Johnston, who scored 18 points, sunk the three-pointer with 56 seconds left in overtime to give the Raiders a 48-46 lead. Roseville, ranked No. 7 in Class 4A by Minnesota Basketball News, held off the Rangers from there to earn a 52-47 home victory.

The game was tight throughout, with Roseville leading 23-22 at halftime. With the game tied 45-45 and 20 seconds left in the second half, both teams had a chance with the ball to end it. But neither possession resulted in points.

With the win, Roseville (11-2, 3-1) now edges Forest Lake (11-3, 3-2) in the Suburban East Conference standings for second place, behind No. 3-4A Stillwater, which remains undefeated in league play.