In a rematch of last year's section title game, the Redhawks won their fifth consecutive game. 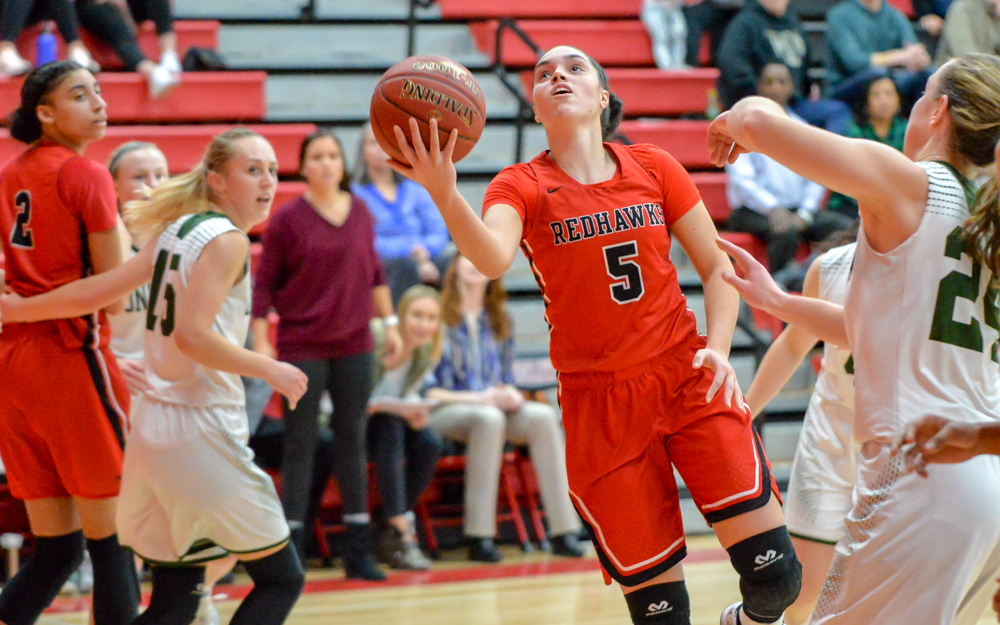 Minnehaha Academy junior Mia Curtis (5) goes for a layup Friday night at home. She had 18 points on the evening, powering the Redhawks past the Beacons 74-57. Photo by Earl J. Ebensteiner, SportsEngine 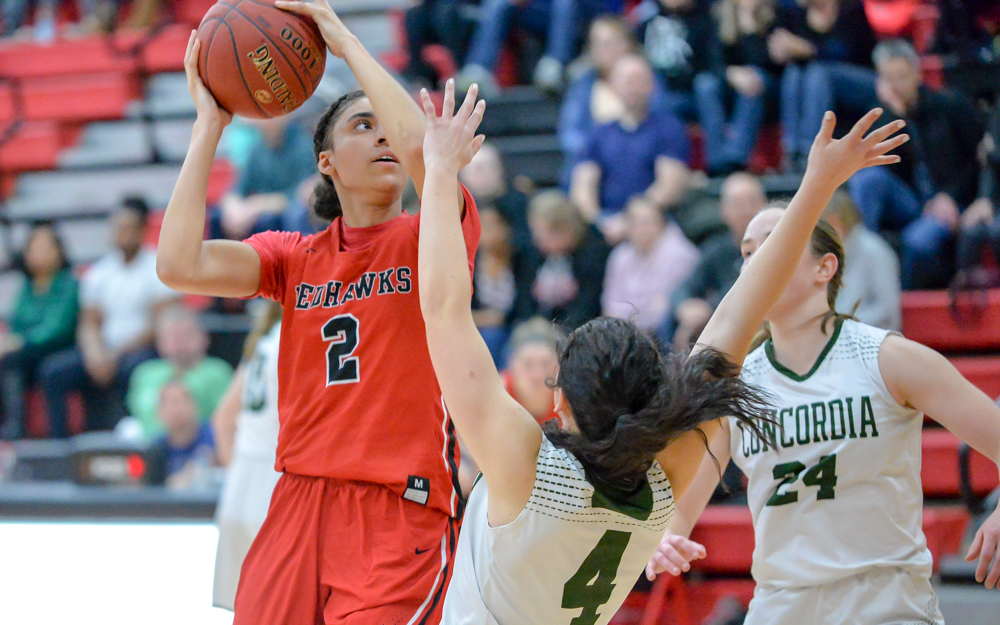 This matchup was always going to be a key game with the rivalry between Minnehaha Academy and Concordia Academy being so intense.

There were seven games involving the two teams in the last five years — two coming in the Class 2A, Section 4 playoffs. Minnehaha Academy beat Concordia Academy in the section semifinals in 2014 season and in the section final last season.

Because the Beacons fell short against the Redhawks in last year’s section tourney, this contest was a lot more interesting for Minnehaha Academy coach Matt Pryor, who helmed Concordia Academy last season.

It was an opportunity he couldn’t pass up.

“It’s definitely different, I grew up here in Minnehaha. I like to think I’m a homegrown guy. The opportunity to come back home, that was too hard to pass up,” Pryor said.

He said he thinks very highly of the players and the people at Concordia Academy, which made it hard to make the change.

“It was difficult saying goodbye,” Pryor said. “But when you get to step into a situation like this, in Minnehaha with the talent we have, and with the tradition we have, it was the right choice and I think the outcome of tonight’s game really solidified that.” 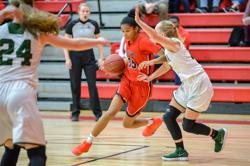 Mia Curtis, a junior for the Redhawks, is one of the players Pryor now gets to coach. He said the guard might be one of the best scorers in Class 2A.

“It’s really funny because I know her favorite player is James Harden. Being a lefty like James, she mimics a lot of her game after his. She’s so good at catching defenders on their heels, changing pace,” Pryor said. “There are very few girls just in the state of Minnesota in general that can control the tempo the way Mia does.”

The Redhawks’ leading scorer, averaging over 18 points per game, said it was a huge compliment that her coach made the comparison.

Curtis mentioned she often watches video of some of the best left-handed basketball players to gain skill and insight from.

“I just love watching [James Harden] play,” Curtis said. “Like last night, when they were playing the Warriors, he hit that buzzer-beater three. It’s just another lefty to watch and get some good skills from.”

Curtis supported her coach’s praise of her in the second half against Concordia Academy (7-5, 0-0), where she scored 13 of her 18 points in the game.

She caught fire from the three-point line, sinking three consecutive shots from deep. Her quick scoring run stopped the Beacons from completing a comeback. Concordia Academy had trailed just 52-46 before Curtis’ three-point barrage.

“The score was getting closer and closer, so I’m like ‘Okay, it’s time to start knocking something down’,” Curtis said. “As a shooter you have to keep shooting and they started falling for me.”

Curtis stated she’s glad her team was able to continue its run of success over its section rival. The Redhawks have now won seven of their last eight games against the Beacons.

“We know it’s a big game coming in,” Curtis said. “We knew they were coming in ready to play because our coach was there last year. We just have to come ready to play and come out harder than them.”

For Concordia Academy coach Tiffany Stubbs, facing the Redhawks was more about keeping the same energy the Beacons put into preparing for any other opponent.

“We try not to make this game way bigger than any other game truthfully,” Stubbs said. “Eventually, we are going to have to play Minnehaha to go to state. That’s how it typically is. We prepared for them like we would any other game.”

Minnehaha Academy put away Concordia Academy 74-57 in a home rematch of last year’s Class 2A, Section 4 final on Friday night.

Minnehaha Academy (8-5, 1-0) started the game strong, making it seem like it would run away with a victory after starting with a 18-7 lead. However, Concordia Academy (7-5, 0-0) had other plans.

The Redhawks, ranked No. 5 in Class 2A by Minnesota Basketball News, looked comfortable early but the Beacons settled in to cut Minnehaha Academy’s lead to eight points. Minnehaha Academy had a 38-28 lead going into halftime.

Concordia Academy found a second gear in the second half. It went on a 10-3 run, getting the deficit down to 48-42. Beacons guard Ivane Tensaie led her team in scoring with 20 points.

Guard Mia Curtis’ strong second half led the Redhawks to the win. She scored 13 points in the second half including three three-pointers in a row. She finished the game with 18 points. Teammates Taytum Rhoades and Nevaeh Galloway added 16 points apiece. 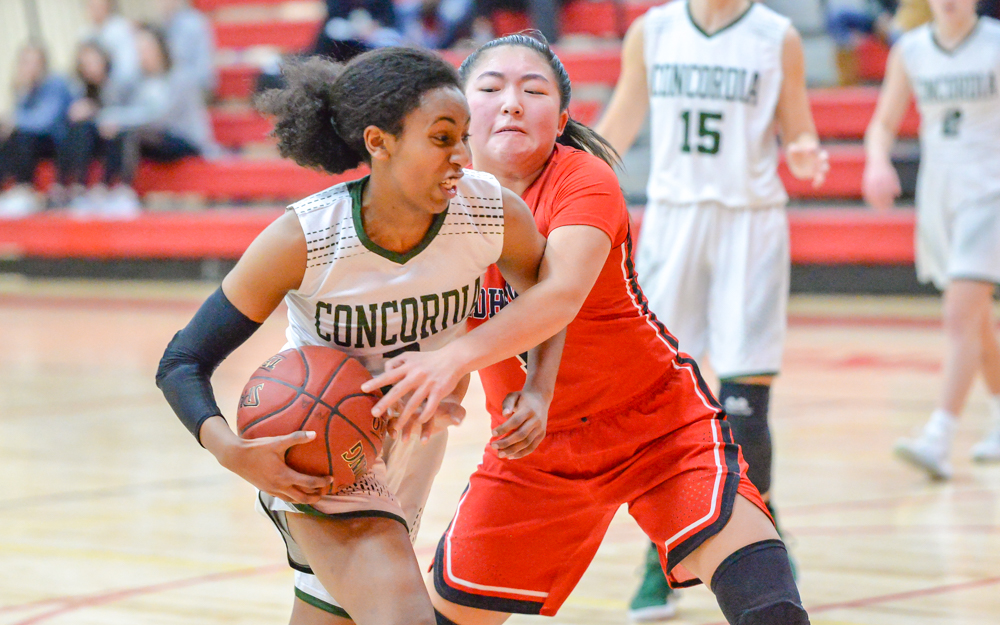