If AAU basketball is about playing games to impress college recruiters, the high school season brings an emphasis on fundamentals and team play. 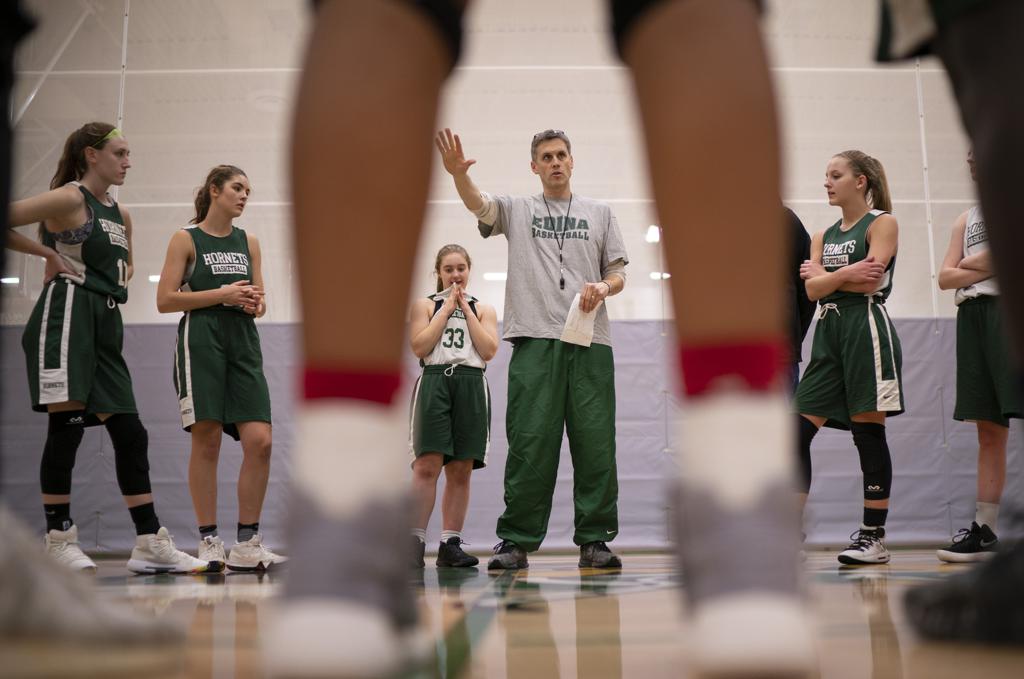 Edina girls’ basketball coach Matt Nilsen addressed his players at the end of practice last week. Nilsen knows well the difference between coaching a high school team and an AAU team. He does both. Photo: Jeff Wheeler * jeff.wheeler@startribune.com

Sara Scalia and Anna Harvey kibbitzed at center court Saturday after Scalia and her Stillwater teammates scored a convincing victory over Harvey’s Lakeville South team in the Breakdown Tip-Off Classic. The meeting was jovial — two friends who’d spent the spring and summer competing together for the North Tartan AAU program, now opponents for the coming months.

Their interaction lasted no more than a minute, but it spoke volumes about the nature of basketball’s high school and AAU seasons.

On one hand, they are foes proudly representing rival schools, and leaders of their respective teams. On the other, they are still teammates and friends with the common goal of developing themselves as players while hoping to impress college recruiters.

“All AAU basically is,” said Harvey, who has signed a letter of intent to become part of the recent pipeline of Minnesota players to Pennsylvania’s Lehigh University, “is getting exposure. And getting better.”

It’s led to a duality to basketball that both coaches and players — boys and girls — admit can be difficult to manage.

When the high school season concludes, Edina girls’ coach Matt Nilsen coaches for the Minnesota Stars AAU program. With a foot in both camps, Nilsen is well-positioned to address the good and not-so-good aspects of basketball in its two-stage format.

One of the biggest problems Nilsen sees is AAU’s emphasis on games rather than practices, which can allow fundamental skills to slide.

Weekends during the spring and summer are heavy on AAU tournaments. Time to practice — and work on little things that can make the difference between winning and losing — is often nonexistent.

“Generally, kids playing more basketball is a good thing,” Nilsen said. “AAU basketball is a valuable opportunity. But they practice so little and play so many games, it isn’t the place to improve your skills. We tell our kids that AAU should be the place where you go test what you have been working on in the driveway.”

By contrast, most agree that the daily nature of the high school season lends itself to a greater degree of teaching.

A day at high school practice

At a recent Edina practice, Nilsen’s charges spent the first half-hour in the classroom, watching video, learning scouting reports and developing their basketball IQ. On-court drills followed. Practice ended with conditioning and strength training. Such an in-depth schedule is not possible in AAU, where players often live hours apart.

“The time you have with the kids is hugely different in high school,” Nilsen said. “We can get so much more in depth with stuff like multiple defensive sets and different presses. In AAU, your time is limited. I just try to keep it as simple as possible.”

“The change from AAU to high school is harder on your body,” she said. “You have a high number of back-to-back practices and going hard every day. Your body has to adjust.”

It’s not just a matter of the differing physical tolls each season expends. Coming to understand the on-court dos and don’ts, such as widely varying styles of refereeing, takes time.

“One of the biggest frustrations is kids adjusting to playing with foul trouble,” Forest Lake girls’ coach Jen Wagner said. “You don’t have to do as much of that in AAU because they can always bring in another player who’s just as good. The top players aren’t as relied upon as much as they are in high school. They haven’t learned how to play with four fouls late in the game.”

It’s generally accepted that the high school game is officiated much tighter than at the AAU level, where tournament schedules are tight and foul trouble doesn’t jibe with the primary reason the league exists: to showcase talent.

“In high school, there’s a lot more pressure to stay in the game because there’s not that many people who can replace you,” Stillwater junior center Liza Karlen said. “You have more people relying on you.”

Players are forced to play a less aggressive style, an adjustment that can take time.

“In AAU, you can reach and its not a foul. In high school, it is,” Prior Lake guard McKenna Hofschild said. “You have to learn what you can do and what you can’t do. I still get caught by it.”

The ubiquitous growth of AAU basketball has polarized some high school coaches. Some see it as helpful to the health of the game. Others are more skeptical, calling it, among other things, “a necessary evil.”

“I like that kids are playing ball in the offseason, but it can be too much,” St. Michael-Albertville girls’ coach Kent Hamre said.

Cretin-Derham Hall assistant boys’ coach Tony Yazbeck has been involved with the Howard Pulley AAU program since 1994 and was appointed to the board of directors in 2014. Among the players he’s seen come through the program are Tyus and Tre Jones, Joe Mauer, Khalid El-Amin and current Gophers Amir Coffey, Gabe Kalscheur, Jarvis Omersa and Daniel Oturu. He’s tolerated plenty of snide comments and assumptions about AAU and responds by saying many of them are just not true.

“The constant repetitions and the time put into study, strength and development in high school are good things,” Yazbeck said. “But the benefits of AAU is skill development. It allows players to test their abilities against the best from the rest of the nation.”

Yazbeck also rejects the long-held stereotype that AAU coaches are little more than glorified baby sitters who acquiesce to players’ moods and demand little of them.

“The idea that they just roll out balls might have been the case in the 1990s, but you don’t see that anymore,” Yazbeck said. “There are a lot of good coaches here who pay attention to detail. What we make sure we do is put kids in the positions to be successful, not only on the summer side but also to go back to high school and play.”

For the players, the priority scales are tipping toward AAU, largely due to a higher level of play and opportunities that it affords. They enjoy both seasons, but the summer game, often with a more talented and dedicated group of players and the chance to get noticed by college coaches, gets the nod.

“I like AAU because it’s faster, more up-tempo and has more flow,” said Hofschild, who will play at Seton Hall in New Jersey next year.

Harvey enjoys both levels, but she said the benefits and enjoyment of AAU are difficult to overlook.

“Both are very satisfying,” she said. “But I wouldn’t be where I am, with a scholarship to Lehigh, without the exposure I got in AAU.”

“I had a lot of fun this past AAU season.”