Sauk Centre one victory from perfect season, 2A title

The Mainstreeters used a 16-2 run in the second half en route to a 54-45 victory over Norwood Young America. 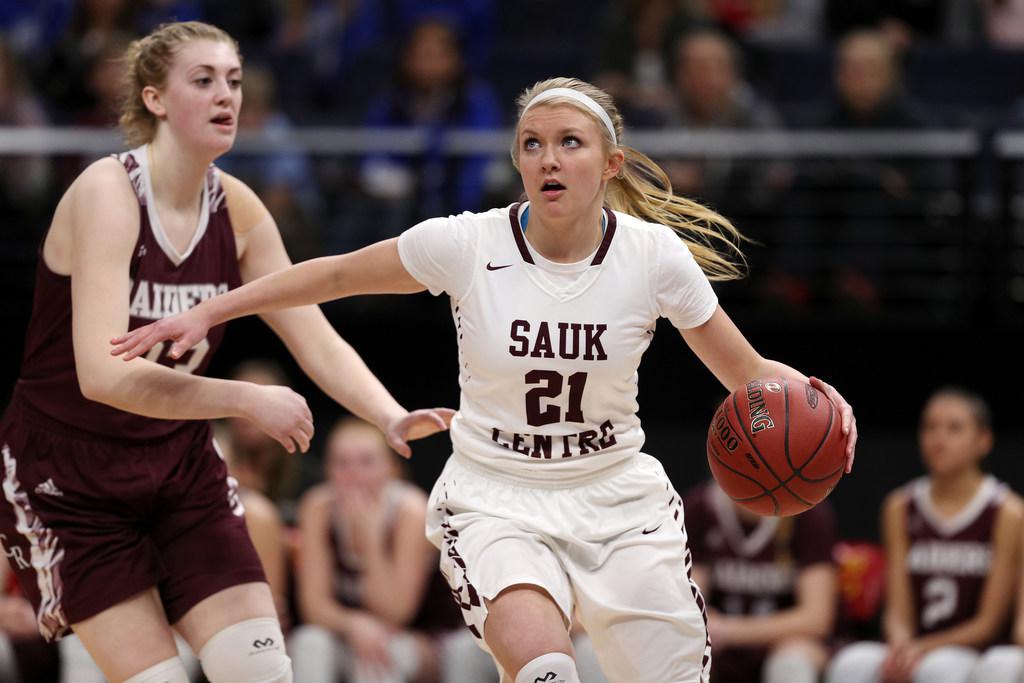 Sauk Centre sophomore Tori Peschel stole the ball and was fouled. She got up from the floor and gave a “let’s go!” shout.

“Well, we knew coming into the game that we’d definitely be smaller, especially down in the post area, so when you get those fouls down there and draw contact… it benefits us,” said Peschel, who finished with a team-high 18 points and 11 rebounds.

That play was near the start of a 16-2 run for the Mainstreeters (32-0) in the second half on their way to a 54-45 victory over No. 6-ranked Norwood Young America in the Class 2A semifinal on Friday at Target Center.

Sauk Centre coach Scott Bergman said it was similar to the quarterfinal against Byron, when his team erased a nine-point halftime deficit with a 21-2 run. On Friday, the teams were tied 23-23 at halftime.

“It just did not seem like we were scoring in transition like we’re used to in that first half, for whatever reason,” Bergman said. “It just wasn’t working, and then early in that second half, we got a couple run outs. Those are just momentum builders for us.”

Senior Kelsey Peschel, who scored all of her 13 points in the second half, was part of the spark. “Second half was all ours, so I was just super excited to get those in,” she said.

“They picked up their defense the second half, which caused us to get out of sync on our offense,” Raiders coach Gary Lembcke said. “Unfortunately, they capitalized and took advantage of some of the mistakes we made.”

The streak is still alive.

The Mainstreeters, in their fourth consecutive state tournament appearance, look to finish off the undefeated season with a state title. They have runner-up finishes in 2012, 2015 and 2017.

The loss snaps a 15-game winning streak for the Raiders (28-4). Senior center Bren Fox led their effort with 18 points.