Haack's stellar season sent the Elks to the state tournament for the first time in more than a decade. 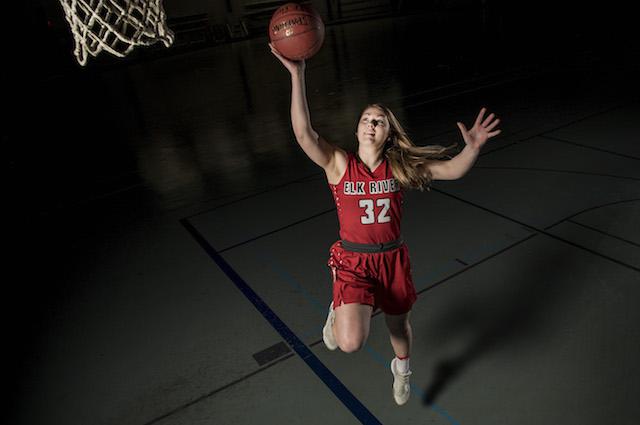 It wasn’t long into the girls’ basketball season before Gabi Haack’s name appeared atop the metro scoring leaders,  some sit-up-and-take-notice numbers next to it. Eyebrows were raised, chins were scratched.

Elk River’s 5-10 senior guard was far from an unknown commodity. She had been a varsity starter since ninth grade and had scored in double figures in 46 of her previous 52 games dating back to her sophomore season. She played AAU basketball for North/Tartan, the state’s top AAU program, and committed to play for Division I Bradley University in Peoria, Ill.

But the numbers Haack (pronounced Hawk) was posting showed more than just the typical improvement that comes with age and experience. She scored more than 30 points in four of the Elks’ first six games after hitting the 30-point mark just twice previously. Through 10 games, Haack was averaging 30 points per game. Soon after, she set a school single-game record with 45 points in a victory over Moorhead.

“I never thought things would go this well,” Haack said.

She is currently averaging 26.1 points per game, still enough to lead the metro. Not coincidentally, the Elks (29-0) are headed to the state tournament for the first time since 2006.

“We’ve always known she was a talented player,” said Jeremy Digiovanni, who took over as head coach of the Elks this season after four years as an assistant. “She’s very mature, very focused on improving and making herself a better player.”

When she found downtime between high school and AAU basketball commitments, Haack hit the gym at the local YMCA, getting better, improving her game. The driving force, she said, was her own conscience.

“I’m kind of self-motivated,” Haack said. “Before the season, I was going to the Y on my own every day on weekends and once or twice a week, shooting and running and lifting, trying to get into better shape. My dad was there a lot to rebound for me, but no one ever pushed me to do it.”

What did drive her, Haack said, was being overlooked by so many before the season started.

“At the beginning of the season, there wasn’t much publicity,” she recalled. “I didn’t make the cover of ‘The Breakdown’ [a preseason preview magazine]. I’m like, ‘Oh, that’s cool. I’m just going to have to go out and show them and make a name for myself.’ ”

As her season progressed and her level of play barely wavered, those who ignored her came sniffing around. In addition to being named Metro Player of the Year, she became a strong candidate for the Ms. Basketball and Gatorade Player of the Year awards.

“As we kept winning and I was getting more and more confident, my athletic director told me some of the awards I was up for,” Haack said. “I was shocked. I never expected to be nominated for any of them.”

How the metro player of the year was chosen

The metro player of the year was chosen based on nominations from metro-area coaches, conversations with a panel of coaches and staff observations.