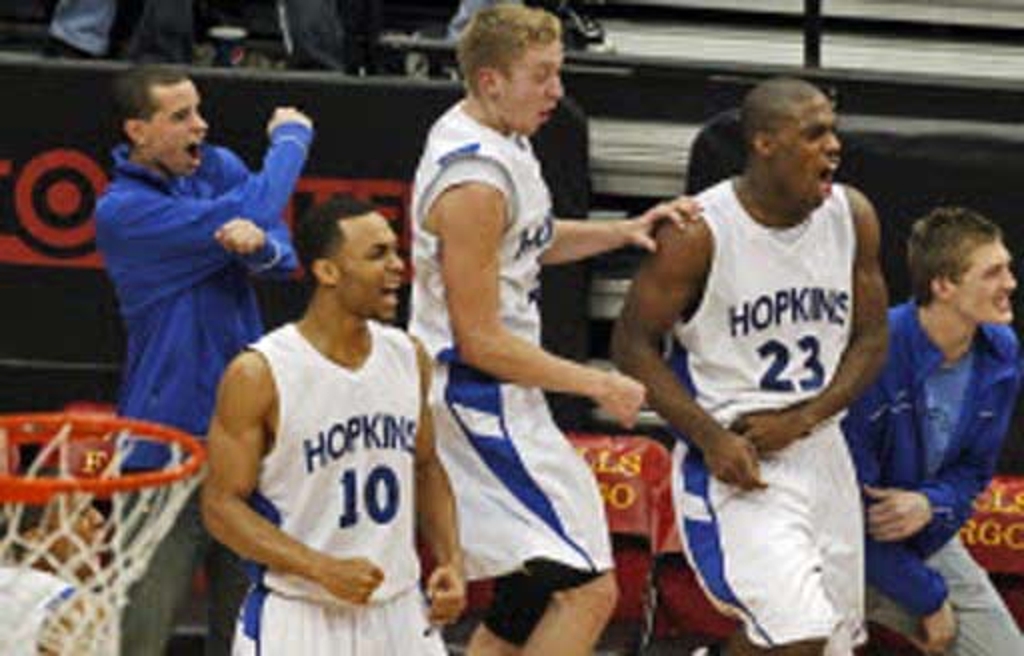 Hopkins players celebrated their 2011 Class 4A boys' basketball championship over Eden Prairie at the final horn.

A plan to dramatically reshape Minnesota high school basketball is emerging in the name of bringing more competitive balance and excitement to one of the state's most storied tournaments.

Modeled after the popular NCAA bracket format, the plan would seed boys' and girls' teams in Class 4A, top to bottom, via a selection process. An 11-member committee of metro and outstate representatives would place each team into one of eight regions that would produce the state tournament teams.

Implicit in the idea is spreading out schools clustered in the toughest sections, where top teams play before ever getting to the state tournament. The proposal's rating mechanisms would seed the top teams in different sections.

The plan, which has widespread support among state basketball coaches, is expected to surface at Thursday's board meeting of the Minnesota State High School League.

"Some people think it's very intriguing to look at it in a different way and it might bring out more interest in the tournament," said board member Kevin Merkle, an associate director with the league who works with the boys' tournament. "But then I know some of our schools are concerned because it's a step away from what has always been tradition of geographical representation."

In a nod to surging interest, the boys' and girls' coaches associations in the coming weeks will do a dry run, with mock seedings, to better see how the tournaments could work.

"It's a real possibility," said Tom Critchley, executive director of the Minnesota Basketball Coaches Association. "If not permanent change, perhaps as an experiment."

Critchley said a survey of three quarters of Class 4A boys' coaches found 78 percent in favor of a new format.

Pat Barrett, former president of the girls' coaches association and a liaison to the MSHSL, put the number of girls' coaches in favor of the change even higher.

In the proposal drawn up by Ryan Weinzierl, creator of the Quality Results Formula adapted by the MSHSL last year as the official formula to seed section tournaments, a committee would rank all Class 4A teams. The intent is to establish eight No. 1 seeds, then fill in behind with No. 2 seeds, No. 3 seeds and so on through No. 8 seeds, à la March Madness.

"The response has been very favorable," Weinzierl said. "It's almost identical to [the] NCAA."

Wayzata boys' coach Phil Ward said he's "all for it. Anybody who really looks at it and asks what is the fairest way to give teams the best shot [at making state]; it's spreading out the best teams away from one another."

Apple Valley boys' coach Zach Goring said: "The state tournament needs a little bit of a kick-start. It would benefit from something like this. It's a total positive for basketball."

Wayzata, ranked No. 4 in the latest big school poll, is in Section 6 along with No. 2 Hopkins and No. 8 Minnetonka. Goring's Eagles, ranked sixth, are in Section 3 with undefeated and No. 1 Eastview. Spreading those teams into five different sections opens up the possibility of all five reaching the state tournament. The current system permits two of those teams -- at best -- to advance.

In girls' basketball, the Class 4A poll's top five teams come from Sections 2 and 6.

"We want to figure out the best way to get the most people to see our product," Barrett said. "We're turning out more Division I and II players than ever, yet less and less people are going to our tournament."

Critics worry that spreading out top seeds will become a metro-only state tournament.

"Our own section [Section 1] has a very good tournament feel to it already at the Rochester Civic Center,'' said Owatonna boys' coach Josh Williams. "I can see the point somewhat, but just not the need for a major change."

Williams added that the proposal piqued his interest and he is waiting to hear more.

High school league board members heard discussion of a change at their meeting in December. It is expected to be brought up at Thursday's meeting and could become an action item on April's agenda.

While the proposal bears similarities to the NCAA tournament seeding, one big difference is that every team makes the field. Play-in games would be held if Class 4A would exceed 64 teams.

Geography would be a top priority in placing teams in the eight regions. Every program would stick as close to home as possible. No team would be permitted to play on its home court. The plan would reseed the winners of the eight regions for the state tournament.

"The biggest issue will be the philosophical issue of competitiveness being part of section placement," Merkle said. "That is a major change."

The plan doesn't fit the other three classes, where schools are too spread out for it to work effectively, Weinzierl said.

Proponents hope the new format is adapted for the 2014 postseason, with a televised selection show to boot.

"It would get people talking about basketball," said Goring, the Apple Valley coach. "Let's open it up. Create great experiences for our kids instead of always being at the same place."

How would it work?

Who decides who's in? An 11-person committee of coaches, team representatives, media members and at-large delegates from metro and outstate, votes to seed and place the 63 teams in Class 4A basketball into a bracket-style postseason tournament using eight geographic region "pods." Once the eight champions are determined, they are reseeded by coaches and compete for the state championship.
How they get picked: Prior to the selection process, the committee receives information on each team from the chairperson, who only votes to break ties. The input include computer rankings, head-to-head results, chronological results, conference results, Class 4A results, home and away results, records from the past 10 games, results vs. top-ranked teams and various polls.
Championship Friday: The region tournament begins on a Saturday, with semifinals the following Tuesday and finals on Friday.
Rules just in case: In the current 63-team format proposal, a to-be-determined No. 1 seed receives a first-round bye. First-round rematches from the previous year's state tournament will be avoided if possible, as will conference match-ups. Teams will not be permitted to play on their home court, but can play in their home city. Region sites would be chosen by the eight region secretaries on a yearly basis.
- Brian Stensaas, Star Tribune