Senior forward Ella Pritchard led the way with 14 points as the Stars held off the Thunderhawks. 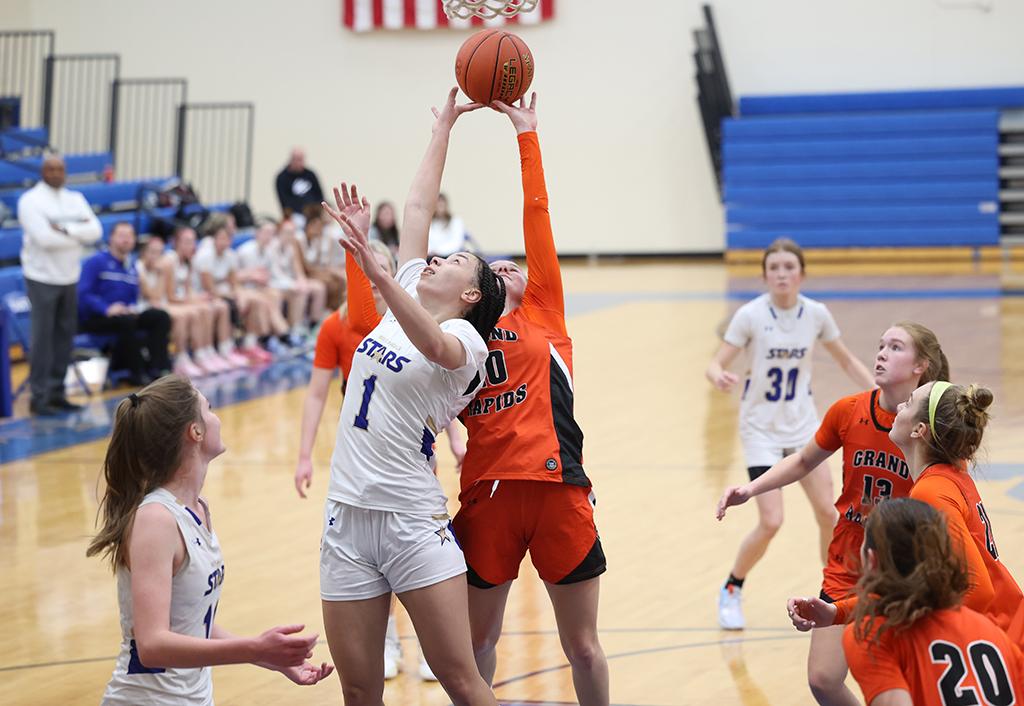 Ella Pritchard (1) led Academy of Holy Angels scoring with 14 points in a 49-45 win over Grand Rapids at St. Thomas Academy on Saturday night. Photo by Cheryl A. Myers, SportsEngine

With about 10 minutes remaining in Saturday’s game, Grand Rapids senior standout Taryn Hamling lay on the court looking frustrated at an official. Academy of Holy Angels had forced Hamling into a turnover with their high-pressure defense.

Hamling has consistently been one of the top scorers in the state the past few years but on Saturday struggled to get the offense going along with her Grand Rapids teammates. The game was close throughout before Holy Angels pulled away in the final minutes to secure a 49-45 win at St. Thomas Academy.

Considered one of the state’s top scorers, Hamling, a North Dakota State commit, showed it in her first game of the season. She scored 28 points and was a perfect 10-for-10 from the field in a loss to St. Croix Lutheran. 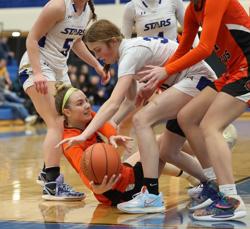 The Stars (2-0) were certainly aware of Hamling, who scored 23 points against them in the 2021 state quarterfinals. Holy Angels coach Danny Woods was hesitant to share any of his game plan on how to slow Hamling.

“There are some things specifically that we did for her,” Woods said. “The players know where she’s at.”

Holy Angels, ranked No. 5 in Class 3A by Minnesota Basketball News, used its full-court defensive pressure to make life tough on Hamling. She missed shot after shot and did not make a basket until well into the second half. She finished the first half with just two points, both coming on free throws.

“When we started the year up, we talked about being better defenders,” Woods said. “Last year, we scored a ton of points but we could defend better. We made a commitment this year to be better defensively.”

The missed shots and aggressive defense led to Hamling looking visually frustrated. Thunderhawks coach Kristine Hamling, who is also Taryn’s mother, was tasked as being both a coach and mother during a rough shooting night.

“I just try to tell her to keep shooting,” Kristine said. “I was telling her to get closer when it came to 3s and step back if you need to.”

Of course, Taryn’s first basket was a tough one. She sunk a shot while being knocked to the ground by a Star player. She soon knocked down her first 3-pointer of the game and strung together some free throws to finish with a team-high 15 points.

The rest of Grand Rapids (0-2) didn’t find much more success offensively. The No. 3-3A Thunderhawks did not have a single bench point. Junior Jessika Lofstrom was the next-highest scorer with 13 points. Senior guard Kyla Giffen provided a spark with three 3-pointers.

Despite the offensive struggles, the Thunderhawks did enough defensively to keep the game close throughout and even found themselves ahead.

But it was Holy Angels that came through with some clutch shot-making and timely defense.

With less than two minutes remaining in regulation, senior guard Kaylee Caron knocked down a 3-pointer to put her team ahead 45-43. Stars junior guard Kiera O’Rourke then stole the inbounds pass and scored to put Holy Angels ahead for good. O’Rourke tallied 13 points and was one of just two Stars players in double figures.

“We have a lot of kids who are freshmen or didn’t play last year,” Woods said. “This builds their confidence up. Getting a closer game makes them fight under pressure. I liked the way they finished the game.”

Despite the tough loss and second defeat in as many days, Kristine Hamling left the weekend with a gauge on her team and what needs to improve.

“I always take these two games as a starting point to see where we’re at as a team,” she said. “It was a great indicator for us to see what we need to improve and a chance to get this sort of competition down here.”

Woods hopes to see Grand Rapids again in the state tournament, and once again utilize a stingy defensive scheme that only Holy Angels players know.

“I don’t want to say too much,” Woods said. “I’m hoping we get to use that strategy again potentially at state.” 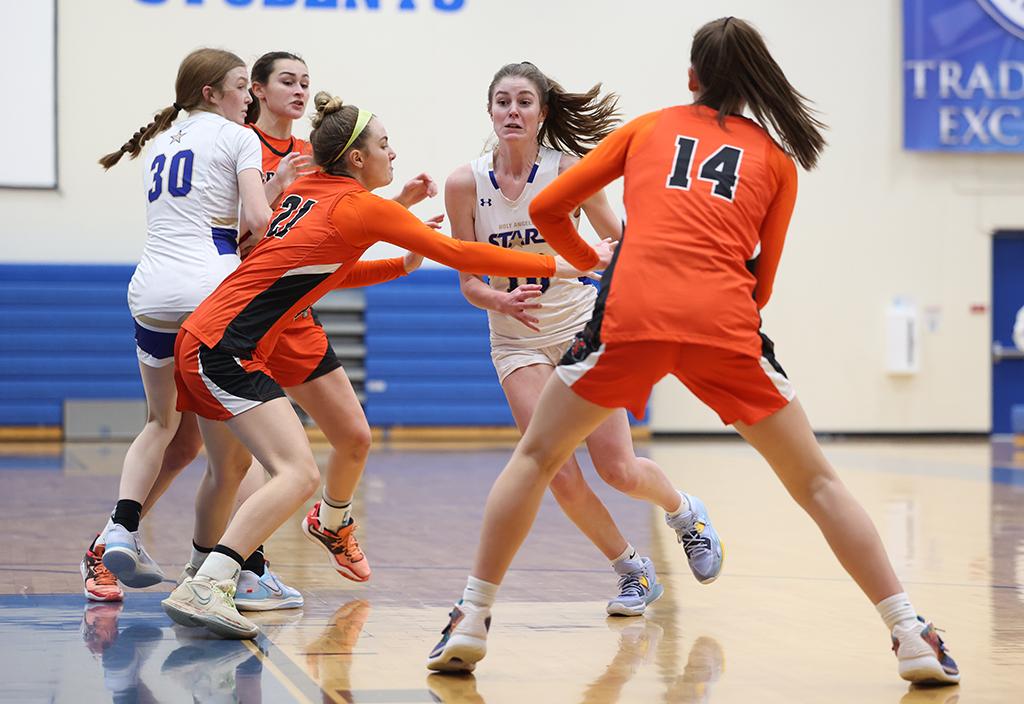 Academy of Holy Angels' Kiera O'Rourke (10) drives to the basket between defenders Taryn Hamling (21) and Hannah Hostetter (14). O'Rourke tallied 13 points for the Stars. Photo by Cheryl A. Myers, SportsEngine

Academy of Holy Angels and Grand Rapids played a tight, low-scoring game. But in the end, the Stars did just enough and defeated the Thunderhawks 49-45 on Saturday at St. Thomas Academy.

Holy Angels (2-0) held a slim lead throughout Saturday’s matchup in what was a game filled with turnovers and missed shots thanks in part to the Stars’ strong full-court defense.

Senior forward Ella Pritchard led the way with 14 points for Holy Angels, ranked No. 5 in Class 3A by Minnesota Basketball News. Junior guard Kiera O’Rourke was the other Star in double figures with 13 points. Her final basket came off a steal late in the second half that helped seal the victory for Holy Angels.

Grand Rapids (0-2) suffered its second loss in as many days after falling to St. Croix Lutheran on Friday. The No. 3-3A Thunderhawks stuck with the Stars but could not get things going.

Senior standout Taryn Hamling struggled throughout the contest for Grand Rapids and did not make a shot from the field until late in the second half. The North Dakota State commit still managed to score a team-high 15 points while also bringing down 11 rebounds.

Thunderhawks junior Jessika Lofstrom did her best to fill in on the scoring side of things. She also finished in double figures with 13 points. 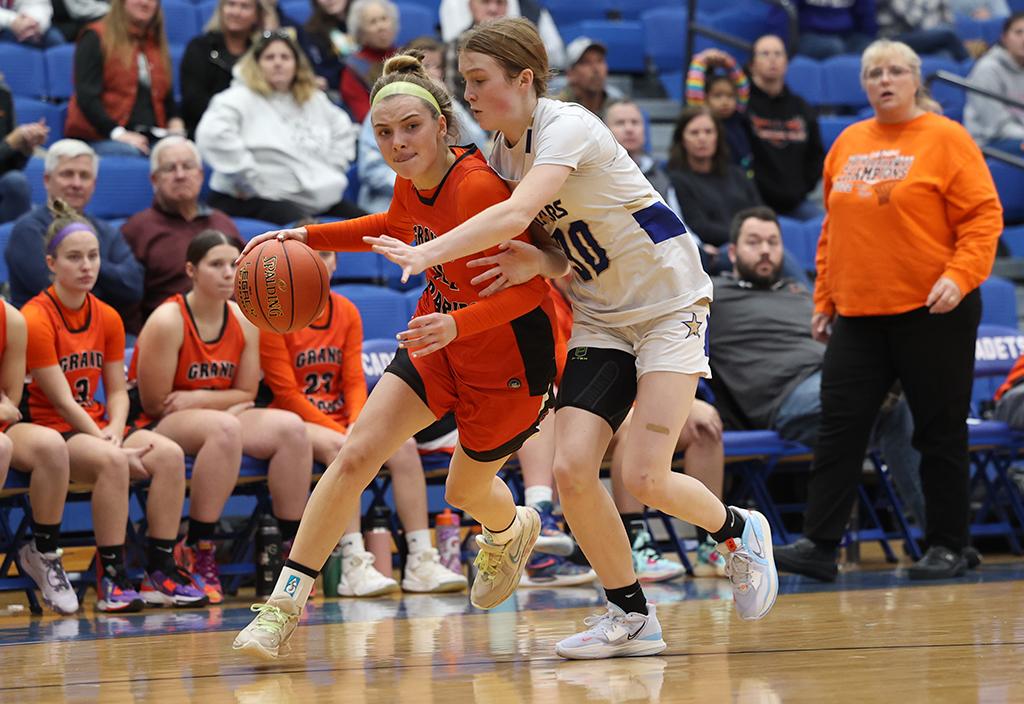