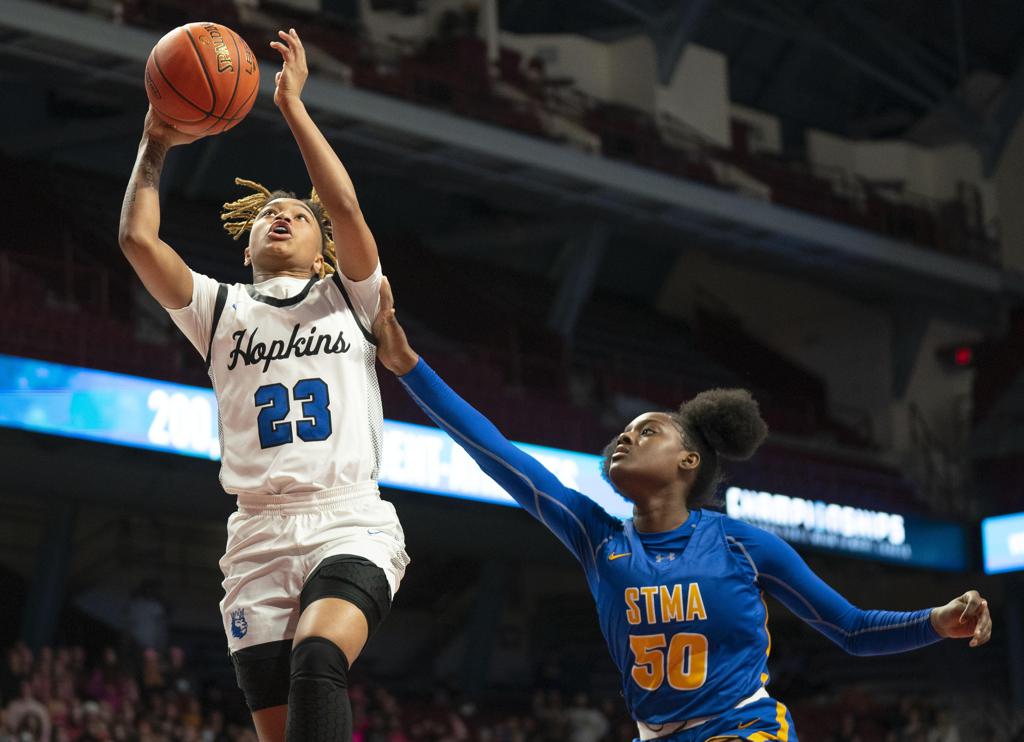 Hopkins guard Liv McGill (23) lays the ball in while being defended by St. Michael-Albertville guard Ja’Kahla Craft (50) in the first half (Alex Kormann, Star Tribune)

It had been the thorn in the side of Hopkins for an entire year and was easily their biggest motivating factor.

One year after an unexpected loss in the Class 4A semifinals ended a state record-tying 78-game winning streak, the Royals rid themselves of the sour taste that loss left in their collective mouths with a 72-56 victory over St. Michael-Albertville in the Class 4A championship game.

“We’ve been waiting for this moment for so long,” senior post Maya Nnaji said. “In 2020, we got cut short, which was devastating, and in 2021, we got cut short again. It was fuel for our fire in every workout, every drill we went through. It was burning in our chest to get back here.”

St. Michael-Albertville came out firing, taking a 7-1 lead on a pair drives into the lane by Ja’Kahla Craft and a three-pointer by

Tessa Johnson, but that was as good as it would get for the Knights.

As they had during all three tournament games, the Royals turned to the one player on their starting five who hasn’t made a high Division I college commitment, guard Liv McGill, to ignite their offense.

McGill scored eight points, including back-to-back three pointers, in an 11-0 run that turned that deficit into a 12-7 Royals advantage. McGill finished with a team-leading 25 points on 11-for-13 shooting.

“I might be biased, but I believe she’s the best sophomore in the state,” Hopkins coach Tara Starks said. “She’s the ultimate teammate. I knew she would give whatever she had to make sure these kids walked away with a state title.”

Hopkins (26-1) had defeated their Lake Conference rivals twice already during the season, but Starks was determined not to let their past success enter into her team’s thinking.

“We wanted to win state, that’s the end goal — but we knew it was one game at a time. Whatever team we have, we got to get them out of the way,” Starks said.

“In this last game, we knew it was one more game. They were standing in the way of our championship.”
Hopkins took a 34-18 halftime lead and never let St. Michael-Albertville cut into that lead, which ballooned to as much as 24 points, in the second half.

St. Michael-Albertville coach Kent Hamre said nothing about the result surprised him.

It had stuck in Hopkins’ collective craw from an entire year and was easily their biggest motivating factor.

One year after an unexpected loss in the Class 4A semifinals ended a state record-tying 78-game winning streak, the Royals rid themselves of the sour taste that loss left in their mouths with a 72-56 victory over St. Michael-Albertville in the Class 4A championship game.

Hopkins players talked extensively about getting their championship swagger back.

“It’s not just last year, but 2020 when it got cancelled,” said senior guard Amaya Battle after their victory in the Section 6, 4A finals. “We just want to win it all.”

St. Michael-Albertville came out firing, taking a 7-1 lead on a pair drives into the lane by Ja'Kahla Craft and a three-pointer by Tessa Johnson.

Hopkins (26-1) had difficulties early getting into their half-court offense, as had been the case often in the tournament.

That meant is was time for Liv McGill to provide some offensive juice to the Royals attack, as she has in each previous game in the tournament.

The junior guard scored eight points, including back-to-back three pointers, in an 11-0 run the turned that deficit into a 12-7 advantage.

At the same time, Hopkins’ defense was starting to make its presence known. St. Michael-Albertville went cold from the field and the Knights were kept off the offense boards by the taller, stronger Royals.

Johnson, the Knights leading scorer, went cold at that point, missing her last eight field goal attempts in the first half.

At the same time, McGill refused to miss. She was a perfect 7 for 7 from the field and had 16 points in the first half as Hopkins built a 34-18 halftime advantage.

Hopkins held St. Michael-Albertville to just 28.6 percent shooting in the first half. The Royals’ height was also making things difficult for St. Michael-Albertville’s quick 5-foot-2 point guard Emma Miller. Her height hadn’t been an issue in the first two games of the tournament – in fact, it had worked to her favor, allowing her to move in and around bigger opponents – but Hopkins size and athleticism were simply too big an obstacle. She had five turnovers in the first half.

The teams played played an even second half, but St. Michael-Albertville was never able to make a run at the Royals, who managed to expand the lead to as many at 24 before the Knights had a late offensive surge.

McGill finished with 25 points on 11 of 13 shooting from the floor and added four assists and four steals. Junior Taylor Woodson had a strong second-half and ended up with 16 points while forward Nunu Agara added 11.

Johnson led St. Michael-Albertville (23-8) with 18 points, while Miller finished with 15.