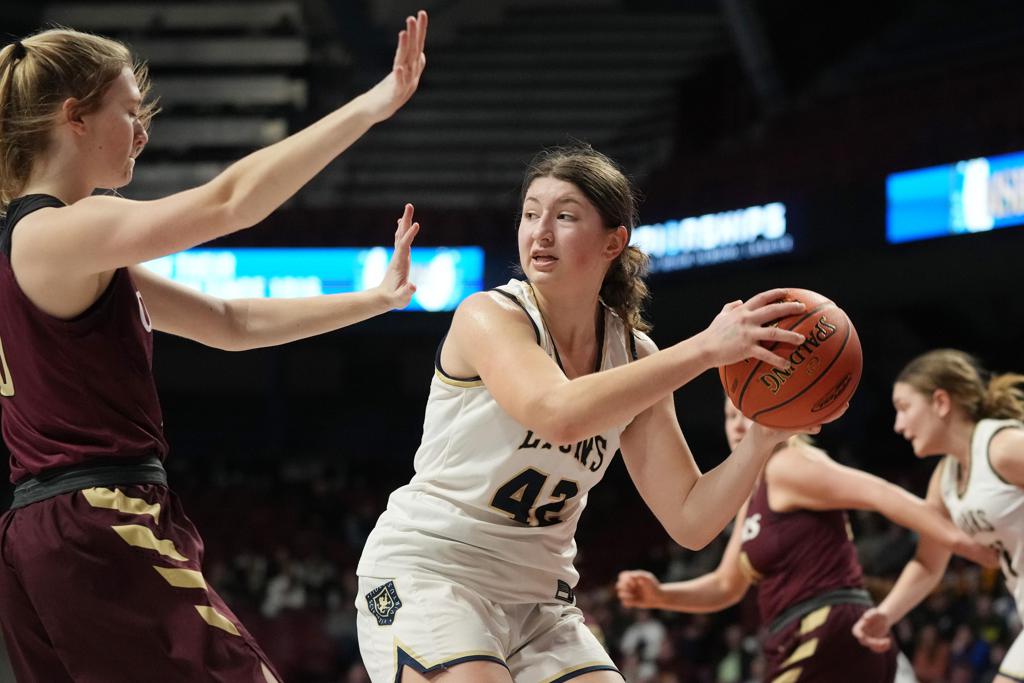 Providence Academy forward Maria Counts (42) grabs a rebound in the first half of the Class 2A state championship game. [ANTHONY SOUFFLE - STAR TRIBUNE]

Providence Academy showed the value of balance and depth, with important contributions up and down the lineup proving the perfect counterbalance to an amazing individual effort from Fergus Falls guard Ellie Colbeck for a 55-53 victory in the Class 2A championship game Saturday at Williams Arena.

The Lions, seeded No. 1 in the tournament and ranked No. 1 in Class 2A all season, leaned on strong games from all three long-and-strong Counts sisters.

Grace, a junior, set the pace early, getting free inside for 13 points in the first half as Providence built 26-22 halftime lead. She finished with 17 points, six rebounds and six assists.

Maria, a senior forward, picked up the slack in the second half as the Otters clamped down Grace. She scored 15 of her team-high 19 points after halftime and added nine rebounds and six assists of her own.

Youngest sister Hope, a freshman who was the only player off the bench for the Lions, didn’t find her way into the scoring column but made her presence felt with a game-high 10 rebounds.

With eighth-grade dynamo Maddyn Greenway running the show and chipping in with 15 points and four assists, alongside key contributions from guards Brooke Hohenecker and Emma Millerbernd, it was just enough to overcome a 41-point effort from Colbeck.

“I’m beyond happy for these girls,” said Providence Academy coach Conner Goetz, whose team lost in the championship game to Albany in 2021. “I’m just so proud of the work these girls put in. Last year, we fell short. This is just so much sweeter.”

Providence Academy, located in Plymouth, is accustomed to big state tournament performance from opponents. Last year, Duluth Marshall’s Gianna Kneepkens set a state tournament record with 67 points in against them in the quarterfinals. Goetz said Colbeck’s 41 was equally as impressive.

“Oh my gosh,” Goetz said. “This one wasn’t as quiet as Kneepkens' 67. I can’t say enough about the tough shots she was making. I thought we were playing pretty good defense. She’s just a crafty player.”

The Lions extended a four-point halftime lead to as many as 11 in the second half before Colbeck began to lead the Otters back. She had stretches when she scored 15 and nine points in a row and brought Fergus Falls to within two points twice in the final minutes.

“Sounds crazy, but sometimes we expect that out of Ellie,” Otters coach Josh Steer said of his superstar guard, who will play at South Dakota St. next year. “She’s a special talent.”

Providence put the game on ice with three free throws in the last 17 seconds to take a 55-50 lead. Fergus Falls’ Brynn Sternberg hit a three-pointer at the buzzer for the final score.

While winning a state title was ultimately the goal, Maria Counts said the journey to get to that point resonated most of all.

“Beyond even the tournament, I’m just glad to get to the last game with my team,” she said. “These last four years, the family and the program we built has been like nothing I’ve ever experienced.”

Providence Academy withstood a standout performance from Fergus Falls guard Ellie Colbeck to pull out a 55-53 victory in the Class 2A championship game.

Maria Counts had 19 points, including two big free throws with 17.8 seconds left to extend the lead to four points for the Lions (29-4).

Colbeck, who played all 36 minutes, carried the Otters (26-6) for most of the game and finished with 41 points