Class 4A quarterfinal: Top-seeded Hopkins goes on a run to overcome Lakeville North

The Royals strung together 13 points in a row to end the first half and cruised into the semifinals. 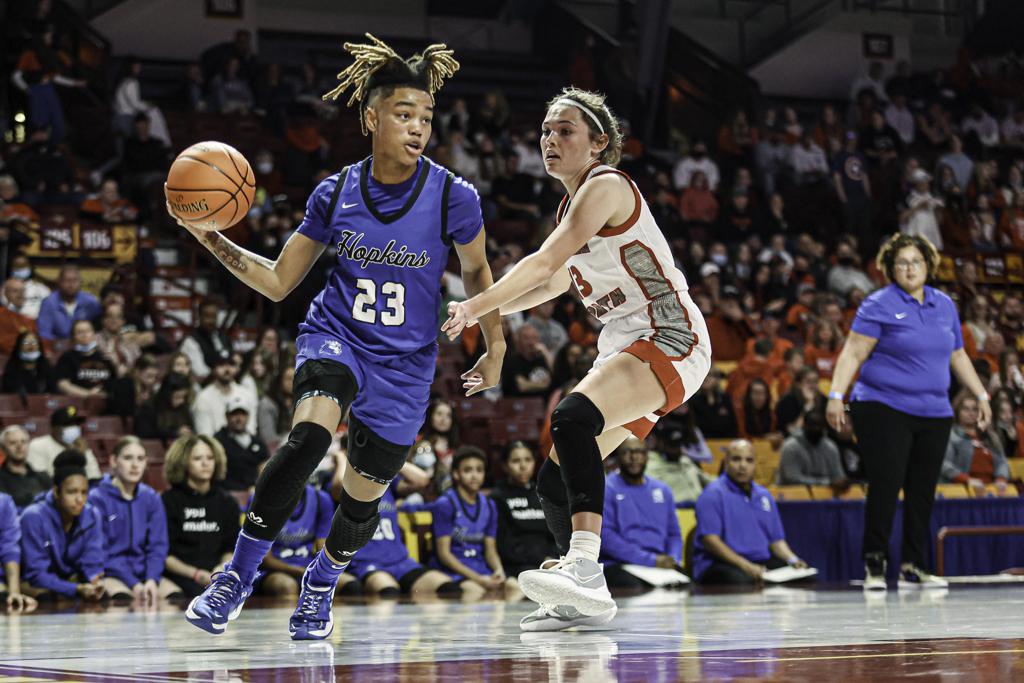 The Royals' Liv McGill looked for a teammate to pass to as Lakeville North's Abby Ruhland defended Wednesday. Photos by MARK HVIDSTEN, SportsEngine

Liv McGill knew it was time.

Hopkins’ smooth sophomore guard waited until her more heralded — but not at all less talented — teammates needed her, then scored 11 of her team’s points in a 13-point run to end the first half. 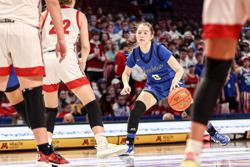 It provided Hopkins a 14-point halftime cushion and was key to the Royals’ 66-43 victory Wednesday over Lakeville North in the Class 4A quarterfinals of the girls’ basketball state tournament in Williams Arena.

“We’ve got a packed team,” said McGill, who finished with a game-high 20 points, including four three-pointers. “Anybody can score, can score 30 on a given night. I just try to bring whatever the team needs. If it’s scoring, that’s what I bring. We needed a spark. Today, it happened to be offense.”

Lakeville North’s tight matchup man-to-man defense kept Hopkins from running away early. The Panthers trailed 15-14 before Hopkins’ fateful run, and they felt good about their effort despite the 23-point loss.

“You just can’t play scared against them,” sophomore guard Gabby Betton said. “If you do that, it’s an automatic loss. I thought we played them tough.”

Hopkins coach Tara Starks said she was happy to get the first game of the tournament out of the way after a season focused on getting retribution for a year ago, when the team’s 78-game winning streak ended in the semifinals.

“It’s real nerve-racking as you get closer to sections,” Starks said. “It’s the reality of being one-and-done. I want them to know that any team can come out and have a great game. If you don’t come out and be your best you, that can cost you your goal, your dream, everything you wanted.”