St. Michael-Albertville’s Tessa Johnson stands ready to show all she learned in a season away

She missed her sophomore year because of a broken femur but returns to the girls’ basketball state tournament as a junior and as a more thoughtful player. 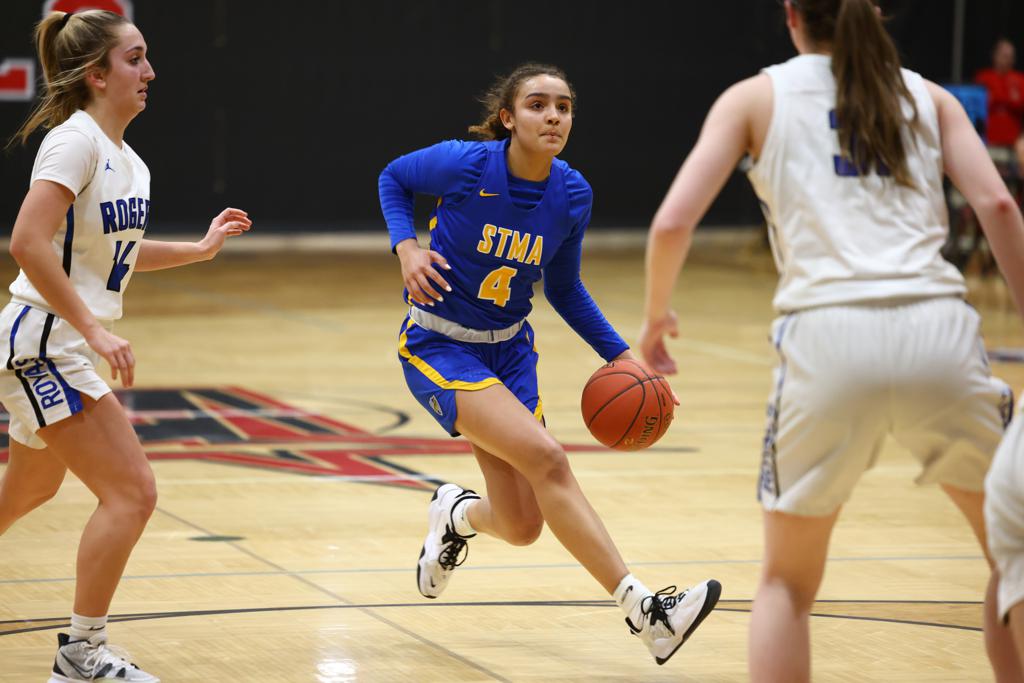 Tessa Johnson split a gap during the section final against Rogers, one more step in getting back to the state tournament. Photo by JEFF LAWLER, SportsEngine

St. Michael-Albertville junior Tessa Johnson is pretty sure the broken femur in her left leg that kept her out all of last season made her a better player.

And certainly added a few points to her basketball IQ.

The Knights are back in the Class 4A girls’ basketball tournament with their heart, soul and leading scorer setting the tone. The tournament begins Wednesday with quarterfinals in three classes.

One of the most dynamic scorers in the state, explosive off the dribble and able to hit the outside jumper, Johnson led the Knights to the Class 4A semifinals in 2020 before COVID shut down the tournament.

Expectations were high last year before the leg injury shut her down.

“Doctors still aren’t sure how it happened,” she said. “They think maybe there were already stress fractures.”

Losing a player as skilled as the 5-10 Johnson would deflate most programs, and Knights coach Kent Hamre admits that it was a blow. Instead of lamenting the loss, Hamre saw progress to be gained.

“We had some girls who were new to the team, and we got them a lot of playing time,” Hamre said.

Johnson found a way to make progress herself. A proud gym rat who followed in the footsteps of older sister Rae, who starred for the Knights’ state tournament teams a half-dozen years ago, she took to improving her mental game.

“It did bother me that I couldn’t play, so I started watching a lot of film,” she said. “I saw myself and some things I could do better.”

She noticed a disconcerting tendency to coast when she wasn’t involved in a play.

“I used to get yelled at for just jogging, but I saw it on film,” she said. “It would make me mad because I could have sprinted.”

Seeing the game from a different perspective brought out her inner coach.

“She’d been around the game so much that she knew what it was like to be on the court when she’d watch kids struggle,” Hamre said. “She could relate to the kids.”

She took a regular spot on the bench. “She was another coach,” Hamre said. “She’d give me suggestions, and of course I’d listen to what she had to say. And whenever they would come off the court, she would lift them up by saying something positive.”

Her words resonated. “I felt like the girls were listening to what I was saying and were buying in,” Johnson said.

All the while, she was building to the day when she would once again take the court. She’d roll around in a chair in her garage, trying to keep her shot from getting rusty.

It all culminated in an AAU tournament last summer with her North Tartan club team. Not long into the game, she found herself in the corner with the ball in her hands and an open look at the basket. She let fly a three-pointer that found the bottom of the net.

“There was a lot of jubilation,” Hamre said. “Smiles, tears, a lot of emotion from a lot of her teammates and friends and the people who support her.”

Johnson said: “It was great knowing how many people cared.”

Johnson believes, despite her 21.4-point average, she’s still not fully recovered. “My speed’s not back,” she said.

Before the season, the St. Michael-Albertville players wrote down their goals for this season. First on their list: “Make it to state.” Second: “Win the state tournament.”

That’s one down, one to go. Johnson can’t wait to get back out on the Williams Arena floor.

“I can’t put into words how much I’m looking forward to the state tournament,” she said. “I love this team, I love our chemistry. I’m more hungry now, and winning would mean more than ever.”