The Redhawks put more than 80 points on the scoreboard on Tuesday. 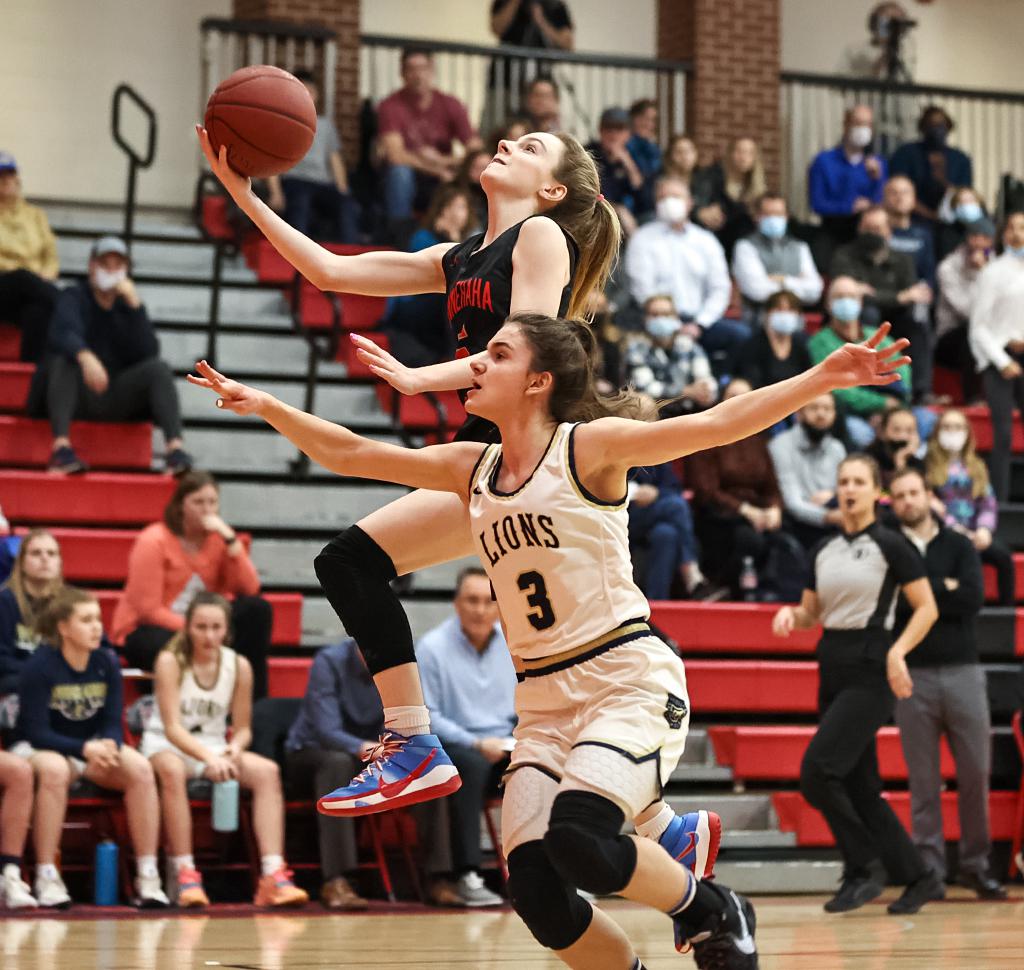 Minnehaha Academy's Addi Mack (5) drives to the basket over defender Brooke Hohenecker (3). Mack led all scorers with 26 points in a 81-54 win over Providence Academy. Photo by Cheryl A. Myers, SportsEngine

Both teams have looked strong all year, but it was the Redhawks who jumped ahead early and never looked back.

The dynamic duo of Charita Lewis and Addi Mack, along with stellar defensive play propelled Minnehaha to an 81-54 win over the Lions Tuesday night at Minnehaha Academy. 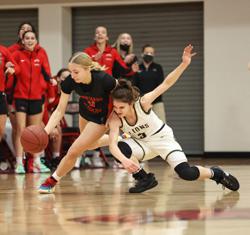 “We executed the game plan perfectly, from a defensive standpoint,” Minnehaha head coach Matt Pryor said. “Maddyn (Greenway) is an awesome player, she’s the one that really makes their offense go.”

“The ability to couple her with the Counts sisters down low in the post, we did a really good job making Maddyn work and earn everything she had to get,” Pryor said.

The Redhawks were all over the Lions from the tip. Forcing turnovers and turning them into buckets, Minnehaha held an early 7-0 lead in the opening two minutes.

“Every single touch those Counts sisters got, we did a good job of contesting, throwing the double teams, and forcing them to kick out of the post,” Pryor said.

A dominant first half yielded a 50-26 lead at halftime for Minnehaha.

Providence provided mini sparks throughout the second half, thanks to 25 points from Greenway, and another 15 from Grace Counts, but were unable to eat away at the deficit thanks to the stellar play from two phenomenal guards.

Mack totaled a game-high 26 points, shooting 11-for-11 from the free throw line, while her teammate Lewis posted 22 points, and knocked down three 3-pointers.

“It makes my job easy,” Pryor said of the two players. “When you got two lead guards who can handle the ball the way they can, really control the tempo, their games really complement each other.”

Mack, who played varsity as an eighth grader last year, leads the team this year in scoring and says this team feels more mature, thanks in part to senior Lewis.

“Last year she didn’t get the opportunity to play with us,” Mack said, referencing Lewis’ season-ending injury last year. “I was super excited to see how we could play together on the court and I think as you guys can see, it’s gone pretty well.”

After transferring schools, coupled with the injury, this has been Lewis’ first opportunity with the Redhawks, and she’s enjoying every minute.

“It’s really a great atmosphere here,” Lewis said. “They pump out great athletes out of here. I came here for more opportunities and because the season-ending injury left me in a blank spot.”

Despite only playing 14 games together, Lewis said her and Mack have bonded well, and it’s reflected on the court.

“Addi brings that fun-ness,” Lewis said. “Being a freshman, obviously a senior teammate like me, you have to be a leader, and look up to that teammate. She’s like my little sister. We bond together, we can talk about anything together.”

Having two capable guards in Lewis and Mack creates endless opportunities on both offense and defense for the Redhawks, something Pryor greatly appreciates.

“It allows us offensively to attack a team in a variety of ways,” Pryor said. “And anytime you have two girls who can give you 20 a night, like I said earlier, that just makes your job easier as a coach.” 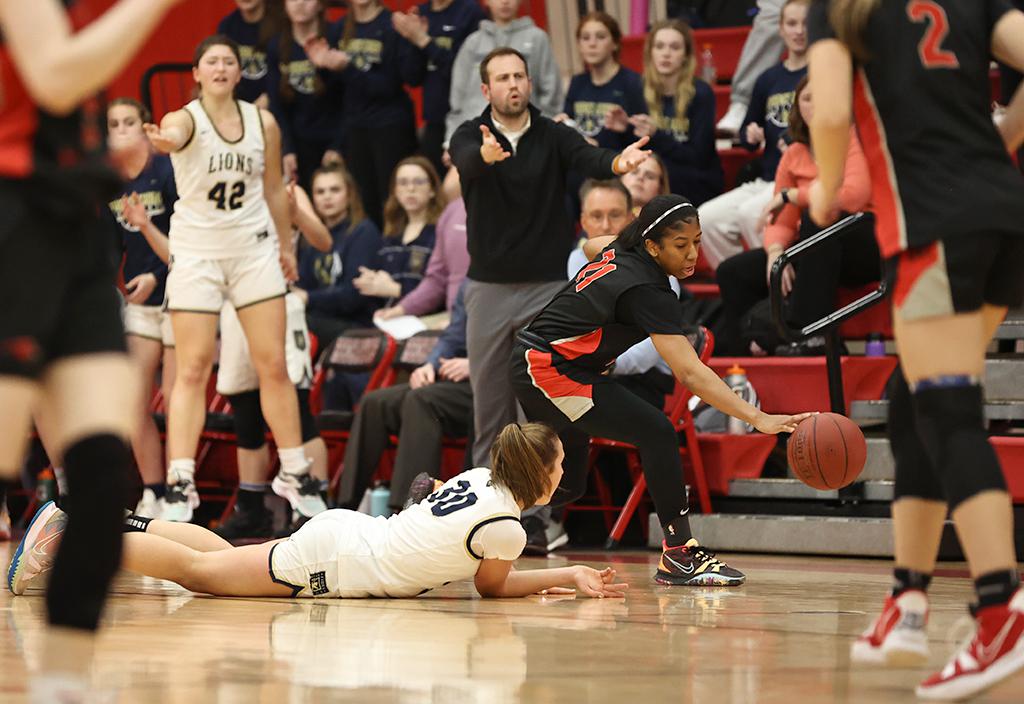 Charita Lewis (21) forced a turnover in the second half. Lewis tallied 22 points for Minnehaha Academy on Tuesday night. Photo by Cheryl A. Myers, SportsEngine

The duo of Charita Lewis and Addi Mack was too much for Providence Academy to overcome as the Redhawks took home an 81-54 win in Class 2A action Tuesday night at Minnehaha Academy.

It was all Redhawks from the opening tip, jumping out to an early 7-0, and taking a 50-26 lead into halftime.

Providence made mini runs throughout the second half, but Minnehaha always answered. Tenacious defense and overall flow on offense helped the No. 1-ranked team in Class 2A by Minnesota Basketball News cruise to victory.

Mack posted a game-high 26 points for Minnehaha, while finishing a perfect 11-for-11 from the free throw line. Senior guard Lewis totaled 22 points and knocked down three 3-pointers. Telia Graham dominated on the boards, hauling in 13 rebounds and adding eight points. 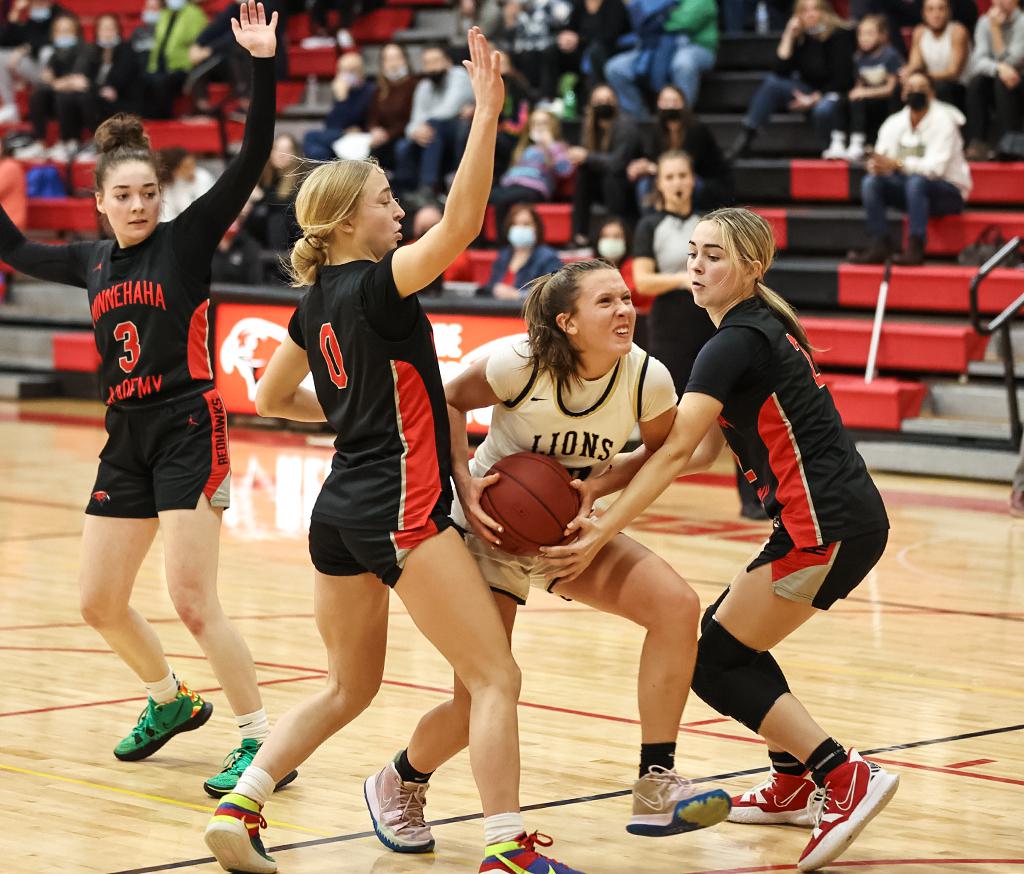 Providence Academy's Maddyn Greenway (30) drives to the basket through a trio of defenders in the first half. Greenway led the Lions with 25 points against IMAC rival Minnehaha Academy. Photo by Cheryl A. Myers, SportsEngine