All-woman crew leads to a question: When the refs are women, is the girls’ basketball better?

Many players and coaches suggest that women officials call the game differently from men, allowing girls to play more physically. They also make an impact as role models. 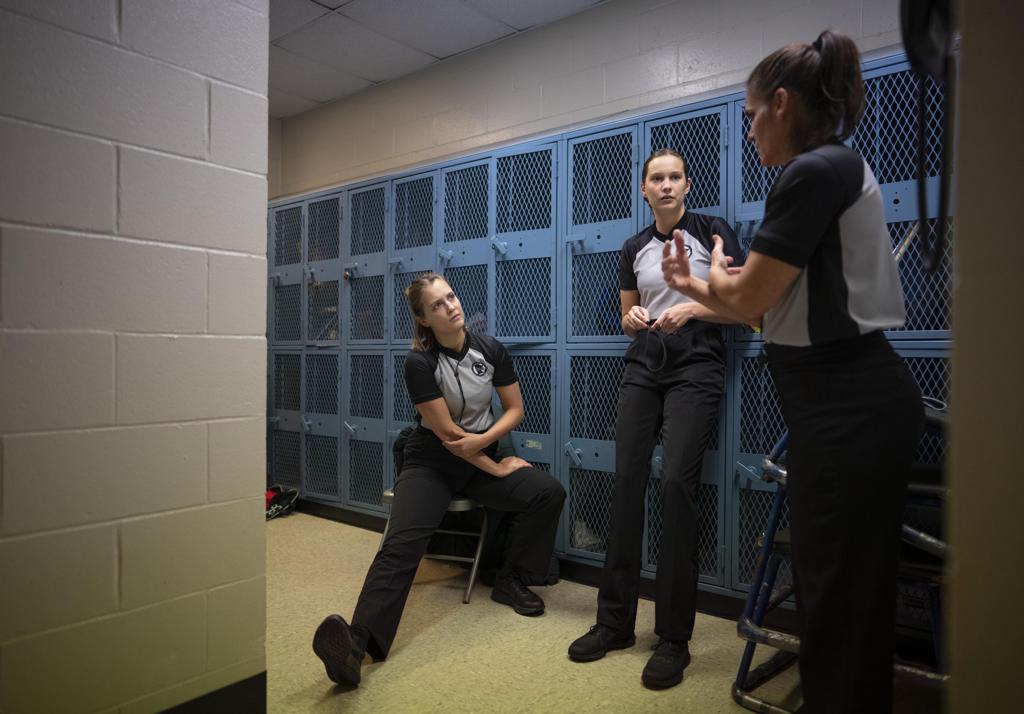 Lindsay Hartman noticed immediately. So did the rest of her Buffalo teammates. This was not going to be an ordinary girls’ basketball game.

When the Bison took the court against Chanhassen in mid-December, the difference was not found on either bench. It was in the three officials set to call the game.

All three were women.

“We all thought it was pretty cool,” said Hartman, a senior point guard. “I definitely appreciate female officials.”

Such appreciation is widespread in girls’ basketball. Many girls’ basketball players and more than a few coaches contend that women call games differently from men. Proving it could keep a sociologist busy for a lifetime, but among female players and coaches the perception is strong that the game takes on a different tone when officiated by women.

Hartman’s teammate Macie Guida said she was calmed by seeing three officials who resembled her.

“With a female, I know the game is going to be officiated by someone who knows what it’s like to be a female athlete,” she said.

Find them, keep them

“I think, of the 250 or so officials we have, we only have about 18 to 20 females,” said Pete Vrieze, who assigns officials for Minneapolis. “We’re always looking for more. I would jump for joy if I could get 50 more.”

The lack of women officials is even more pronounced at Gopher State, which has just four out of about 200.

“They can be hard to hold on to,” assigner Rick DeGardner said. “Usually, if they’re good, they move up quickly and into officiating college.”

Chanhassen was Buffalo’s opponent in that Dec. 9 game, beating the Bison 73-52.

“I definitely think there is a difference with female refs,” said Chanhassen coach Kayla Walsh, who played collegiately at Iowa and Winona State and is in her second year leading the Storm.

“I think they will hear me out a little bit more. As a female coach, there are times when I feel I’m not listened to as much by a male ref.”

Buffalo coach Barb Metcalf said the difference in how the game was officiated was evident from the outset.

“To me, things just seemed more equitable,” Metcalf said. “It felt like there was a better flow to the game, with a lot fewer ticky-tack calls. There weren’t 50, 60, 70 fouls. They let them play.”

“There’s an assumption that women cannot be physical and are less athletic,” Eden Prairie coach Ellen Wiese said. “Boys play more physically, and the male referees are used to that. It’s like they’re saying, ‘I’m going to be more lenient because of your gender.’ ”

Wiese feels it’s a product of how we’re raised.

“Throughout society, men are taught to be aggressive and go get what they want. Women, when they try to do the same thing, are called too uppity,” Wiese said. “Those differences still show up in the way the game is called.”

Kent Hamre of St. Michael-Albertville is the lone remaining male coach of a girls’ basketball team in the powerful Lake Conference. He’s witnessed firsthand the gender bias in the officiating ranks.

“We had a doubleheader, with a boys’ game and a girls’ game,” he said. “I watched the boys’ game and it was a lot more physical, but we had about 20 more fouls called in our game. They do let the boys get away with a little more.”

A fact that’s not lost on girls’ players.

“We’re athletes,” Guida said. “Physicality is a part of the sport. If they let the boys be physical, they should let the girls, too.”

One official said it’s simply about referees understanding the game taking place in front of them.

“As officials, we’re taught to allow for a flow to the game,” said Dayna Rethlake, a former player and coach who has been officiating for about a decade. “It’s not so much calling it tighter for the girls as it is defining the skill level and what players can play through.”

Rethlake believes those discrepancies are declining quickly. She cited the improved strength and skill of girls’ players since she helped Midwest Minnesota (now MACCRAY) to a Class 1A championship in the mid-1980s.

“The gap has shrunk. The agility and the skill level for girls is so much better now,” she said.

Macy Madsen, a woman official in her early 20s who has been officiating high school games since she was an 18-year-old at the University of Wisconsin, said the style of play should lead to the style of officiating.

“Each game is different, and you have to acknowledge that,” she said. “It’s not apples-to-apples.”

Madsen acknowledged there are quick whistles when girls play physically. “Those are pet peeves of mine,” she said. “But you have to recognize that all officials call games differently.”

If there’s one thing all agree upon, it’s a pressing need for more women officials.

“When I was playing in high school, there was one woman official that I would see and I remember thinking, ‘That is so cool,’ ” Madsen said. “I think it’s important to have women as role models. I don’t think I would have become an official if I hadn’t seen her.”