The Ponies marched on to a 71-61 victory on Wednesday. 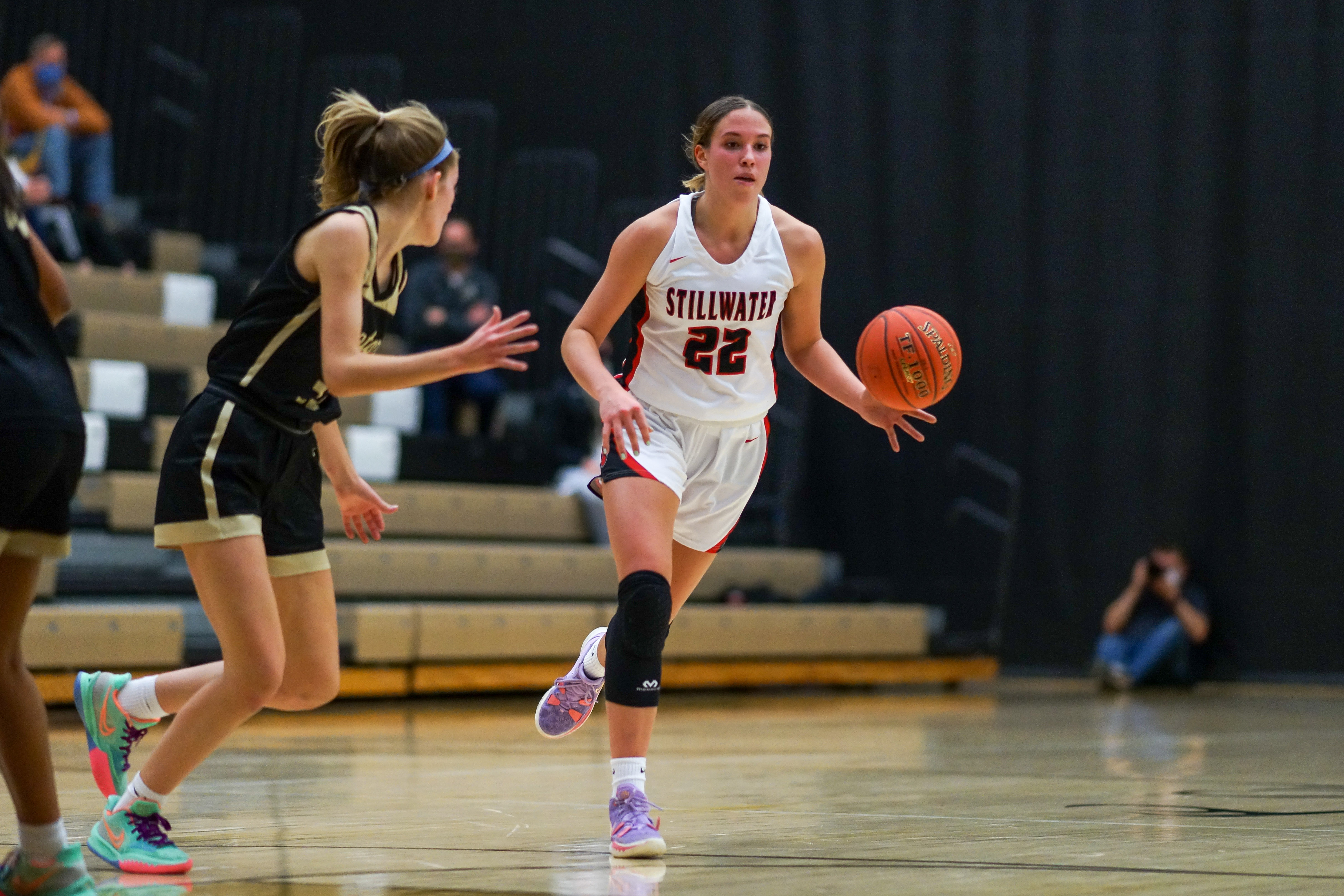 Stillwater's Lizzie Holder(22) led her teammates with 20 points in a 71-61 victory over East Ridge Wendesnay night in Woodbury. Photo by Korey McDermott, SportsEngine

Stillwater wasn’t happy to be absent its future Division I college point guard for three weeks, but the Ponies sure made the most of her time away

Facing some lesser competition before Suburban East Conference behemoths loomed, Stillwater reeled off four straight wins all by 20 or more points. Senior Amber Scalia, the Ponies' 25 points-per-game scorer, was sidelined with an injury.

The stakes were raised Wednesday when Stillwater, ranked No. 7 in Class 4A by Minnesota Basketball News, took an overall five-game win streak on the road to East Ridge, winners of four straight. 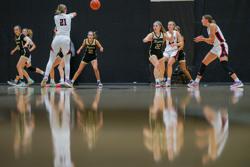 Scalia re-entered the picture at just the right time, helping Stillwater (9-2, 5-1) keep pace in the conference race with a 71-61 victory.

She went 3-for-3 from long range en route to 15 points, most on the team only behind senior forward Lizzie Holder’s 20.

Holder’s leadership is a continuation of what Stillwater coach Tim Peper has seen of late. That leadership doesn’t just stop at Holder, either.

“When Amber was out, Lizzie really picked it up doing an awesome job for us,” the first-year Stillwater head coach Peper said. “She’s like ‘Okay, I’ve got to step up because Amber is out.’ Really, it was the whole team. Everybody stepped up and competed and played hard. Now that we’ve got Amber back, we’ve got kids used to doing more things with Amber out.”

East Ridge (8-5, 5-2) kept up early on with a potent Stillwater offense entering the night averaging 75.2 points per game. That clip is the fifth highest in the state and second in Class 4A behind No. 1 Hopkins at 81 points per game.

Grace Knupp had 10 of her 15 points for the Raptors in the first half. She was instrumental in giving her team a 14-11 lead in a back-and-forth opening sequence.

Stillwater's starters played nearly the entire game, but never lacked energy. The Ponies stunned the Raptors with a 19-0 run midway through the first half to go up by 16.

“I would say our defense was our biggest factor,” Scalia said. “Our offense, obviously, helped us, but I think we got a lot of stops at the end. We finally figured out how to stop them when they got the ball in the post.”

East Ridge cut down on turnovers and whittled the halftime deficit to 42-31.

Emily Christenson’s 10 points co-led East Ridge in the first half. She picked up in the second half even hotter than where she left off, pouring in the team’s first 13 points after the break.

Christenson made five 3-pointers on the way to a game high 23 points. She helped cut the deficit to as close as 48-42, but Stillwater never flinched.

The Ponies pushed the lead back up as much as 13 and was solid from the foul line to stave off the Raptors’ persistent comeback tries.

While Christenson got hot, Stillwater kept all other scorers off the scorebook in the second half until 9:05 remaining.

Isabella Sanneh was the one to end the drought. She added 12 points and another paint presence for the Raptors.

Despite Wednesday's setback, it’s a team gaining confidence after four early losses dropped East Ridge out of the rankings. Three of those defeats came to teams currently ranked in the top four.

“Every single game they play, they play hard,” Peper said of East Ridge. “We knew it was going to be a battle. They were going to play really, really hard and they have really talented kids.”

Stillwater won its 10th straight against East Ridge dating back to January 2017. The two met in the 2021 Section 4A title game, a 60-55 overtime Stillwater win. Both are back in Section 4 again this season.

“I think we really played together, especially on defense,” Holder said. “That’s been one of our focuses in practice. And sharing the ball on offense, as well. All of our starting five scored in double digits so it really showed. Just effort. Our intensity was insane considering we all played a majority of the game.”

The Ponies’ starters handled all the scoring. Rounding out the production were Alexis Karlen with 13 points, and 11 for Lydia Knutson and Amy Thompson.

Thompson made six free throws in the second half to help ice the game.

“Lizzie did well tonight. Amy made a few shots for us, Lexi was strong,” Scalia said. “Lyd did well when she had three fouls in the first half.”

Peper was familiar with the Stillwater program coaching much of the roster in AAU and other offseason programs, as well as last year as the B-squad coach.

He's leaned on a veteran roster and maintained many of Taylor's philosophies to keep the train rolling.

“We’ve got a lot of senior leadership that really helps carry us through those moments. When things are getting tight, they’re like ‘We’ve been here, we’ve done this before.’ That really helps in that situation.” 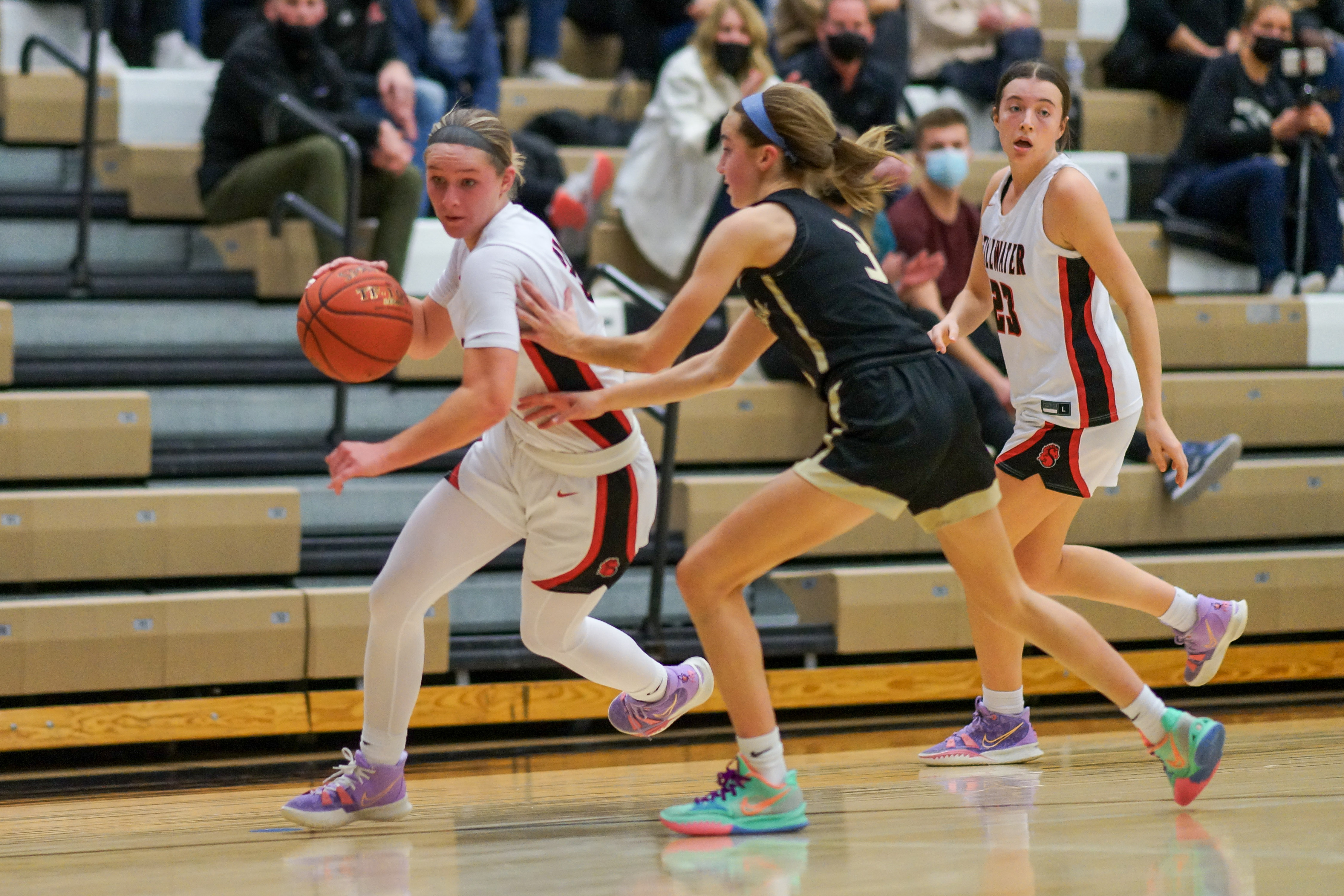 Amber Scalia (L) scored 16 points in her first game back off an injury on Jan. 12 against East Ridge. Photo by Korey McDermott, SportsEngine

Stillwater was never quite comfortable in victory, but its high-octane offense continuously kept East Ridge at bay.

The Ponies raced past the Raptors, 71-61, Wednesday night in a conference matchup at East Ridge High School.

Stillwater’s scoring came entirely from its starting five. Alexis Karlen kickstarted the offense early and finished with 13 points. Lydia Knutson and Amy Thompson added 11 points. Thompson made six free throws in the second half to keep Stillwater up by three or more possessions down the stretch.

Stillwater is tied in the loss column atop the Suburban East Conference with Roseville. This was the Ponies’ sixth straight win on the season and 10th in a row against the Raptors.

East Ridge entered the night on a four-game win streak and was tied atop the conference standings. 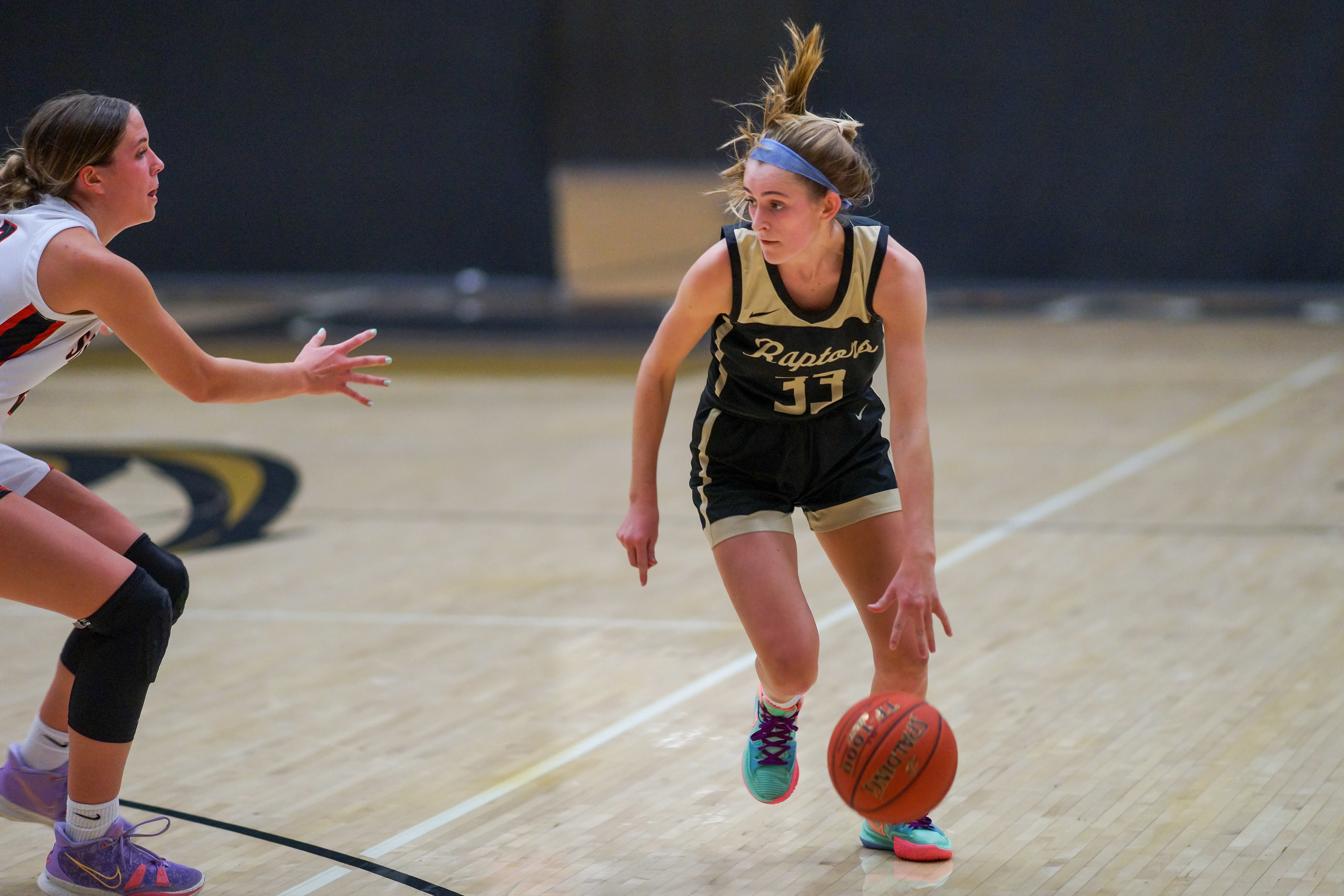