The Bears used a dominant second half to stop the Raiders on Friday. 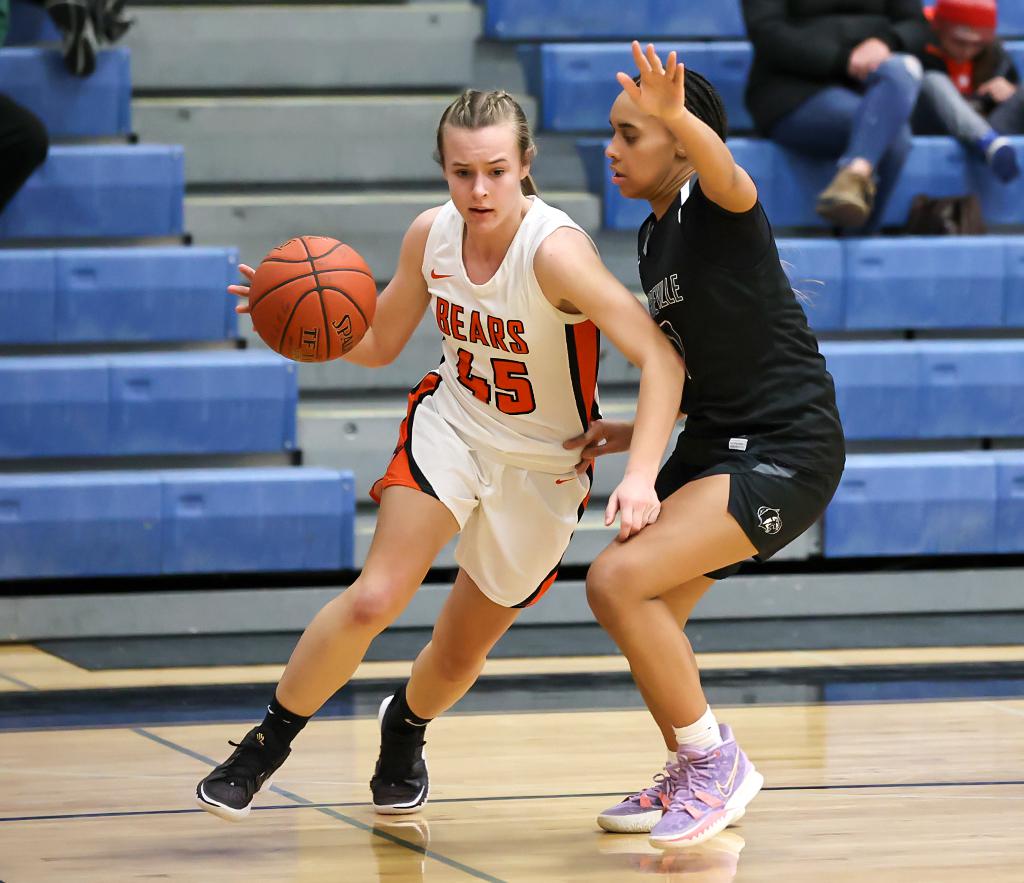 Lauren Eckerle (45) led all scoring on Friday night with 16 points. White Bear Lake upset Roseville, No.7-4A, by a score of 58-46 and outscored the Raiders by 15 points in the second half. Photo by Cheryl A. Myers, SportsEngine

No lineup combination has been the same from game-to-game for White Bear Lake. Whether it be injuries or other absences, the Bears’ have had to adapt throughout the season.

When the right combination comes together, the Bears are dangerous. That played out with a 58-46 win that handed Roseville (10-2, 5-1) its first loss on the home floor and in Suburban East Conference play. 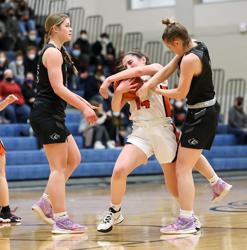 White Bear Lake trailed by as much as eight points in the first half before whittling back to 23-20 at halftime.

An 11-0 Bears run over the first 5 minutes, 30 seconds of the second half sent shockwaves into their opponent.

White Bear Lake has held 11 of 13 opponents under 60 points and surrenders just 44.5 per night. Defense is the constant.

Getting shots to fall at a great enough rate will determine if the orange and black can remain in the conference title race as the back half of the season looms.

“Our shots weren’t falling in the first half, so it was just a matter of time,” White Bear Lake senior co-captain Lauren Eckerle said. “They’ll start dropping, and they did. Our defense fuels our offense, and when the shots fall it’s a confidence booster.”

Eckerle was the poster child for the team’s “just a matter of time” mantra on Friday. She poured in 12 of her game-high 16 points in the second half, hitting a pair of timely threes on the way to helping her team coast to victory down the stretch.

White Bear Lake led by as much as 18. Roseville pulled within nine in the final four minutes thanks to standout efforts from backcourt duo senior Gabrielle Kopp and sophomore Kendall Barnes. Kopp hit three triples on the way to a team-high 13 points. Barnes penetrated the lane for 10 points, all in the second half.

The Raiders, ranked No 7 in the Jan. 5 Minnesota Basketball News Class 4A rankings,  were bogged down by the Bears’ preferred slower tempo. Roseville began to get out and run for more transition points late, but only after the deficit was too large.

Senior co-captain forward Nevaeh Hughes chipped in four points and made an impact on the glass and patrolling the paint.

“It’s exciting. I got to be with my teammates and feel that excitement,” Hughes said. “We came back after a couple tough games, but we definitely came together and did our thing.”

Sophomore forward Jordyn Schmittdiel was a force inside and attacking the hoop for White Bear Lake. She added 15 points.

The Bears’ third co-captain, Addie Bachmeier, contributed four points and was a steady hand as a press breaker.

“She’s solid for us at point guard,” Eckerle said. “Roseville has a tough press, so it’s good to have people like that to help us out.”

Added Hughes: “When she gets pressured, she pushes right through it.”

So did the Bears. 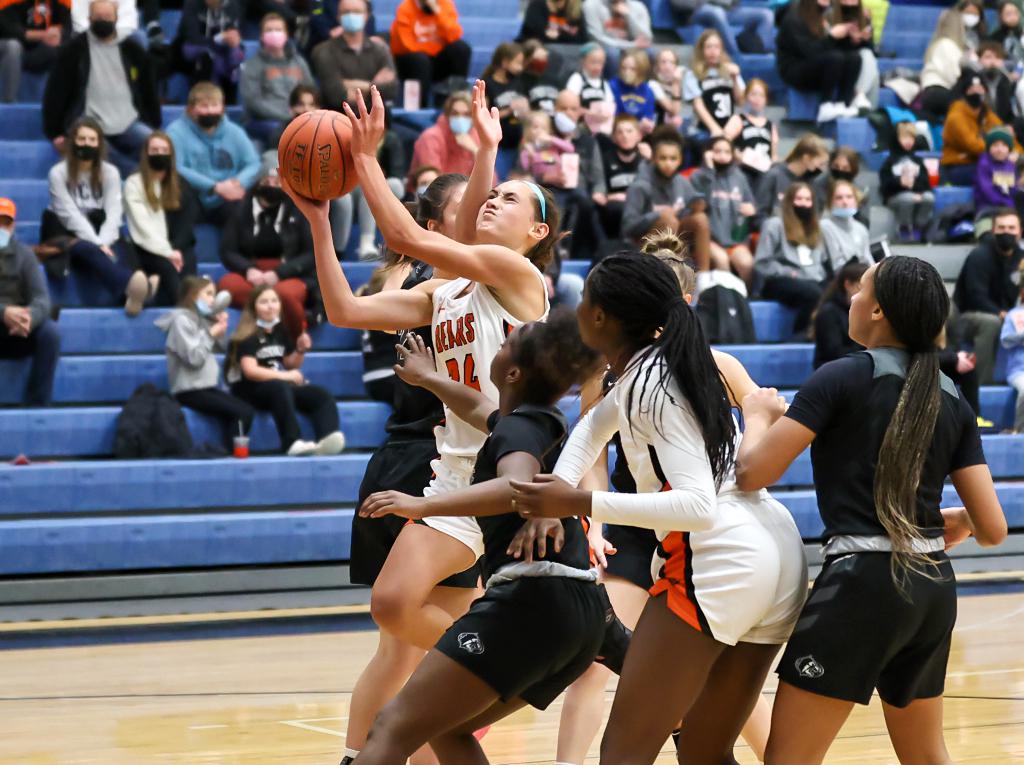 White Bear Lake's Jordyn Schmittdiel (24) pushes through traffic to the net. Schmittdiel added 15 points helping the Bears to a 58-46 win over Roseville. Photo by Cheryl A. Myers, SportsEngine

Roseville led the Suburban East Conference matchup 23-20 at halftime and by as much as eight points in the first half.

White Bear Lake held Roseville scoreless over the first 5 minutes, 30 seconds of the second half during an 11-0 run.

The Bears’ guard Lauren Eckerle scored 12 of her game-high 16 points in the second half. She was followed by sophomore forward Jordyn Schmittdiel with 15 points.

Roseville was led by senior guard Gabrielle Kopp’s 13 points. Sophomore guard Kendall Barnes scored all 10 of her points in the second half. 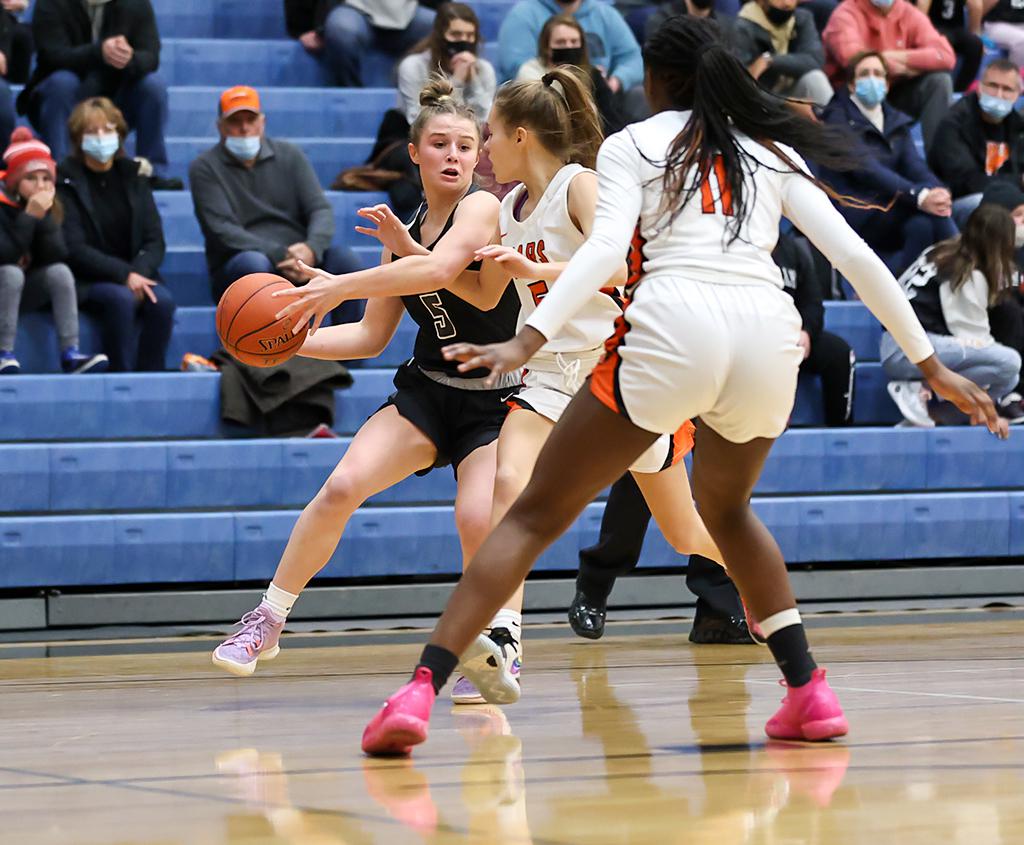 Roseville's Gabrielle Kopp (5) scored a team-high 13 points in a 58-46 loss on Friday night. Photo by Cheryl A. Myers, SportsEngine