The Hawks trailed by eight points at halftime, but outshot the Eagles in the second to emerge victorious. 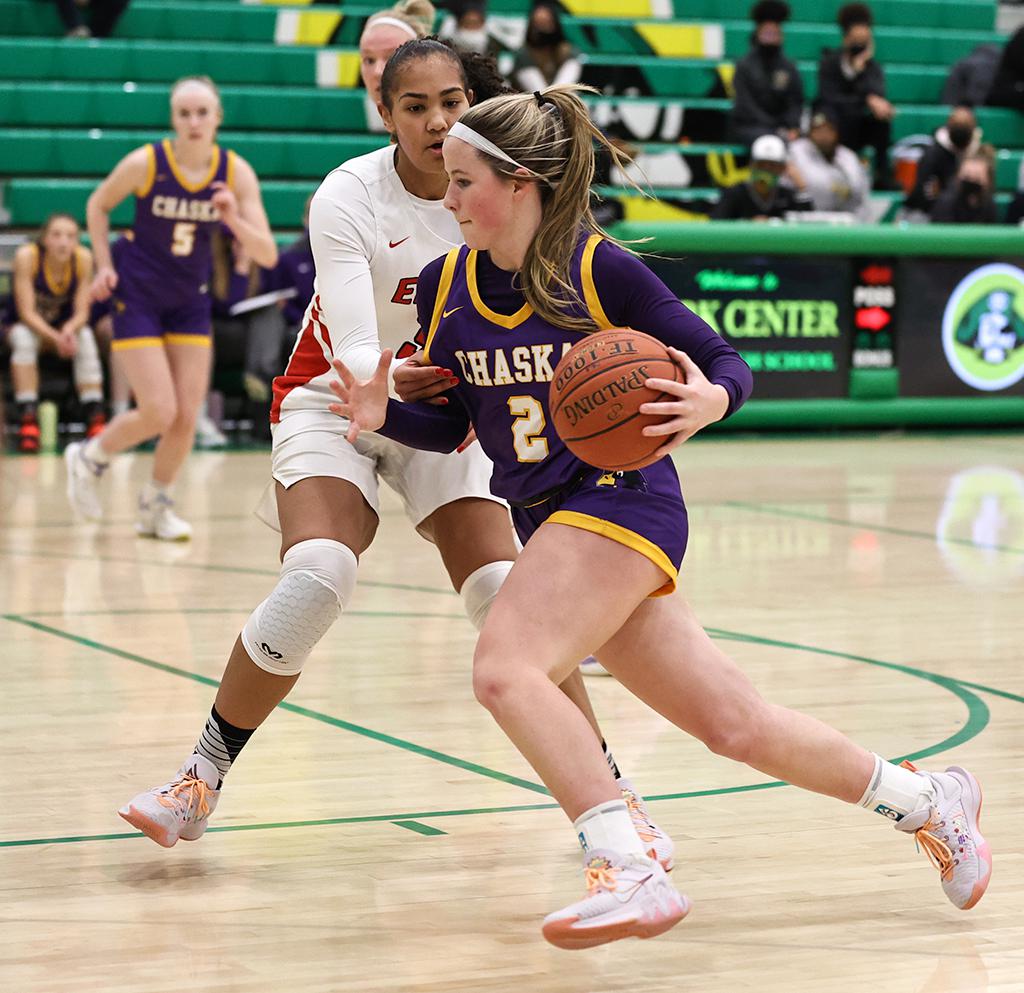 As the crowd stood and applauded Chaska’s Kennedy Sanders as she passed 1,000 career points, the Hawks guard’s face turned red as the spotlight was all on her.

Though Sanders may have been modest in that moment, she has plenty of things to brag about. She’s the leading scorer for the defending Class 4A state champion. She was also the catalyst as her team came back from a double-digit deficit to hand section rival Eden Prairie its first loss, 65-59.

This was the first time the two schools had met since the Class 4A, Section 2 final in 2019 when the Eagles defeated Chaska on its home court. This season, both teams are ranked in the top four in Class 4A in Minnesota Basketball News’ Dec. 22 rankings and are likely to be vying for the section title alongside No. 2-4A Minnetonka. 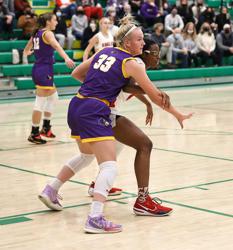 No. 3-4A Eden Prairie (8-1) entered Wednesday’s game as a team without a loss and delivered the first punches to No. 4-4A Chaska as the Eagles went into halftime ahead by eight. Their senior leaders—Myra Moorjani and Nia Holloway—sparked the offense as Moorjani poured in nine in the first half while Holloway added eight points.

Defensively, Eden Prairie slowed the Chaska offense, including Hawks senior forward Mallory Heyer. She had just one made shot in the first half and had three points total.

Early in the second half, the Eagles saw their lead grow to 11. Right around that same time, Sanders knocked down a 3-pointer to hit that 1,000-point mark. Up until that point, she had been the main source of offense for the Hawks.

“She’s just a shifty point guard,” Chaska coach Tara Seifert said. “She can get past just about anyone. She’s good at getting herself opportunities and her teammates opportunities.”

Sanders’ 3-pointer seemed to give Chaska a spark of sorts. The Hawks, led by Sanders’ scoring, started to chip away. Then players such as Heyer and junior guard Ashley Schuelke took advantage of open shots.

“In the second half, my teammates found me for open shots which was great,” Heyer said.

With about five minutes left in regulation, Heyer got open for a pair of 3-pointers and hit both to put the Hawks ahead late in the half.

“We talked to the girls about shooting with confidence,” Seifert said. “We had a tough first half shooting. I know we’re a good shooting team. Shots were going to fall for us.”

According to Eden Prairie coach Ellen Wiese, the loss of her team’s lead came down to defense.

“Our defense fell down,” Wiese said. “We didn’t communicate on screens and we fell apart.”

When the second half finished, Sanders led all scorers with 19 while Heyer had 16 and Schuelke had 17. It was a big win for the Hawks against a highly-ranked opponent and potential section tournament opponent.

“There were a lot of big things about this game,” Seifert said. “I told the girls this was going to be one of the toughest teams we were going to face. I knew it was going to be a grind. I was proud of how we bounced back.”

For the Eagles, this is the start of a grueling grind to the rest of the season. The Lake Conference holds five of the top six spots in the Class 4A rankings. Besides that, Eden Prairie will most likely have to defeat Chaska and/or Minnetonka to advance to the state tournament.

“This is what we will face night in and night out,” Wiese said. “Hopefully we will do better against this tougher competition.” 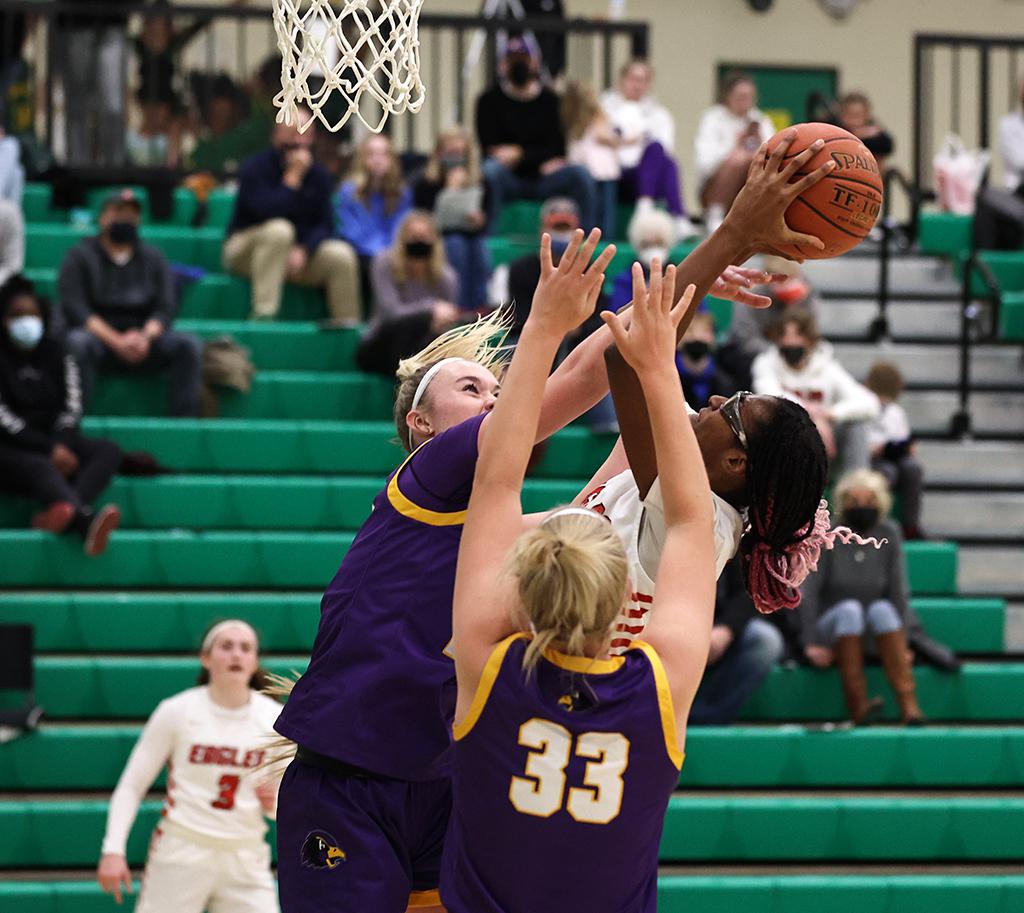 Chaska's Mallory Heyer (left) gets her hands on a shot by Nia Holloway in the second half. Heyer added 13 second half points after seeing limited playing time in the first half due to foul trouble. Photo by Cheryl A. Myers, SportsEngine

Trailing by as many as 11 points in the second half, Chaska slowly clawed its way back and took down Class 4A, Section 2 rival Eden Prairie 65-59 on Wednesday at Park Center High School.

The Eagles, ranked No. 3 in Class 4A by Minnesota Basketball News on Dec. 22, came out tough on both sides of the ball in the first half. On offense, Eden Prairie was led by senior leaders Nia Holloway and Myra Moorjani. Holloway, a University of Minnesota commit, led her team with 14 points while Moorjani scored nine of her 12 points in the first half.

Junior Molly Lenz was also a big part of the offense as she poured in 13 points for the Eagles (8-1).

The No. 4-4A Hawks (7-1) stuck close by the Eagles in the first half thanks to junior guard Kennedy Sanders. She finished the game with a team-high 19 points. Eleven of those came in the opening half.

Trailing by eight points heading into the second half, Eden Prairie saw its lead grow to 11. But Chaska started slowly chipping away thanks to senior standout Mallory Heyer. After having just three points and limited time in the first half because of foul trouble, the future Gopher stepped up with 13 second-half points, including three 3-pointers.

Besides Heyer and Sanders, junior guard Ashley Schuelke came through with 17 points, including 12 in the second half that helped put away Eden Prairie as Chaska handed the Eagles their first loss of the season. 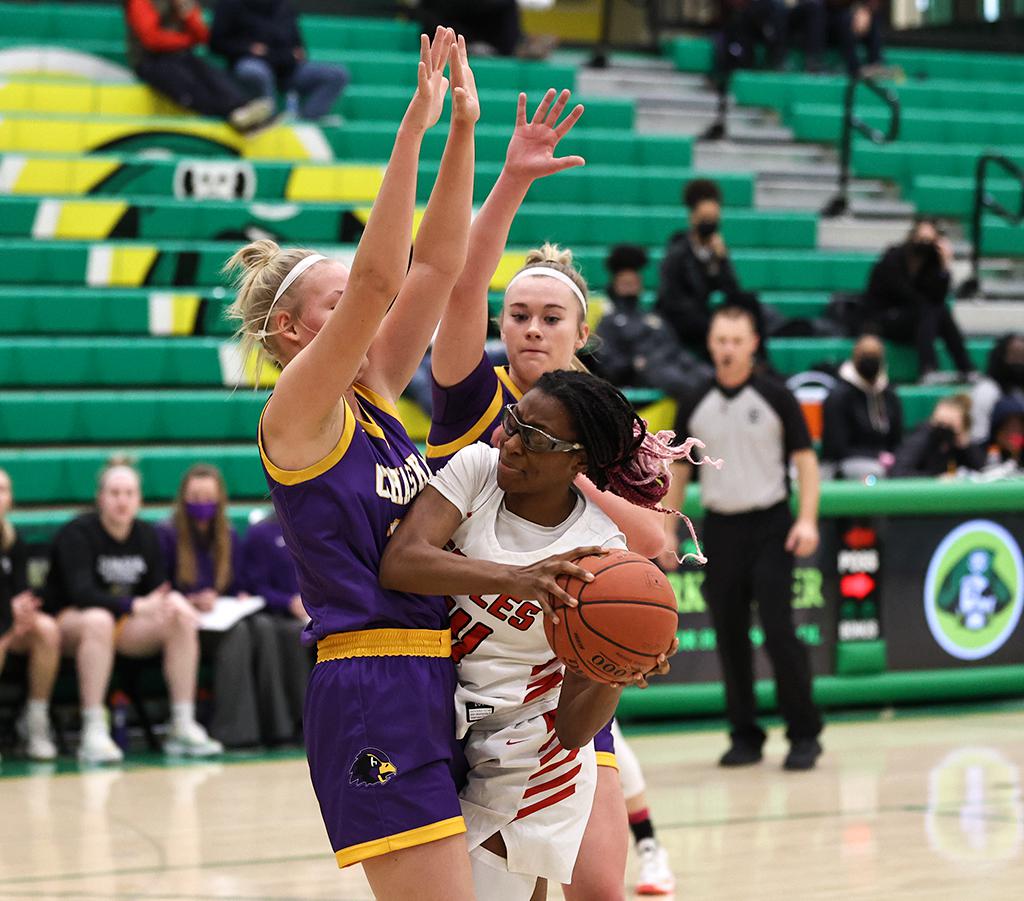 Eden Prairie's Nia Holloway (41) is double teamed by Kendall Karrmann and Mallory Heyer. Holloway was held to six points in the first half, under relentless Chaska coverage. Photo by Cheryl A. Myers, SportsEngine