Hopkins is back with all of the players who felt the pain of ending a 78-game winning streak. 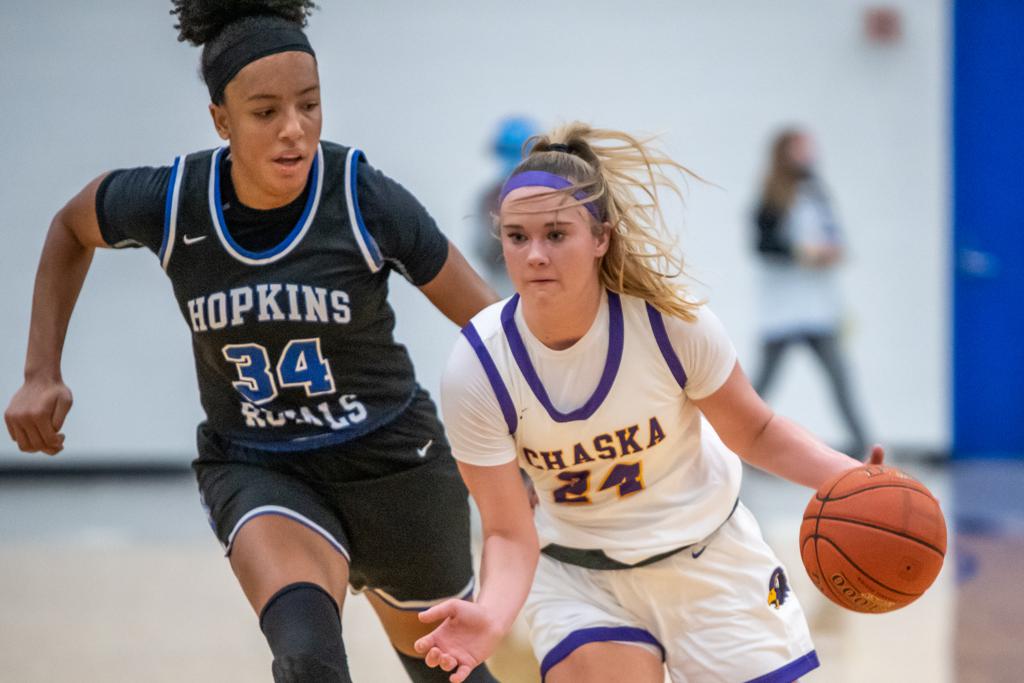 1. Poised to bounce back

Despite having their state record-tying 78-game winning streak ended by eventual champion Chaska in last season’s Class 4A semifinals, Hopkins is once again sitting atop the state girls’ basketball heap. The Royals bring everyone back from a year ago, headed by reigning Metro Player of the Year Maya Nnaji and future Gophers guard Amaya Battle. Nunu Agara and junior Taylor Woodson are a powerful and athletic pair of guard/forwards, and sophomore Liv McGill, who added an electric instant offensive style to the Royals, is one year older and more experienced. Coach Tara Starks will have this team motivated by some unfinished business of a year ago.

2. Who can beat Hopkins?

Hopkins is the obvious favorite, but which Class 4A teams pose a serious threat? The rest of the Lake Conference does. Minnetonka has a dynamic backcourt pairing in guards Kiani Lockett (Creighton) and Desiree Ware (Alabama-­Birmingham) and a budding star in 6-1 sophomore forward Emma Dasovich. Wayzata features quick and savvy guard Mara Braun at the controls and a new head coach in Julie Stewart; St. Michael-­Albertville tops off its deep talent pool with the return of junior shooting guard Tessa Johnson, sidelined last year because of a broken leg. Eden Prairie has forward Nia Holloway and plenty of help in guards Myra Moorjani and Molly Lenz and lengthy forward Savanna Jones. Chaska has plenty back from a year ago, led by post Mallory Heyer and guard Kennedy Sanders, a state-tournament standout.

A big part of the fun this season will be watching the four west-metro players who make up a highly touted 2022 recruiting class for Gophers coach Lindsay Whalen: Battle, Braun, Holloway and Heyer. The best part? Fans can measure them against each other, often twice because Battle, Braun and Holloway play in the Lake Conference. Hopkins and Chaska met Saturday in the Breakdown Tip-Off Tournament, with Hopkins prevailing 70-45, and Chaska plays each of the other Lake teams during December.

The graduation of the four Gophers commits might put a dent in the talent level after this season, but the girls’ basketball future still looks bright. Olivia Olson is a 6-1 sophomore guard at Benilde-St. Margaret’s who is considered a top-five recruit in the nation for the Class of 2024. Over the summer, she averaged 10.2 points, 4.2 rebounds and 2.3 assists for Team USA in the FIBA Americas U16 championship in Mexico. And, of course, there’s Maddyn Greenway, who wowed everyone while averaging 21 points per game as a seventh-­grader in leading Providence Academy to the Class 2A championship game. Both have drawn comparisons, understandably and perhaps unfairly, to a young Paige Bueckers.

Class 3A: Champ Becker has some difficult holes to fill, but the Bulldogs have returning talent. Totino-­Grace has jumped out to a 4-0 start. Hill-Murray, which won 20 in a row last year, will be in the thick of things. If St. Paul Como Park survives its brutal early schedule — the Cougars have already lost to Hopkins twice — it could be dangerous.

Class 2A: Providence Academy lost little from a year ago and will be near the top of the class again. Minnehaha Academy will be its biggest challenger.

Class 1A: This is shaping up to be a tremendous school year for Mayer Lutheran. The Crusaders won the Class 1A volleyball and football championships and have the talent to make it a three-title year with the girls’ basketball team.

Mallory Heyer, Chaska, F, 6-2, senior: Doesn’t get outworked on either end of the floor. Averaged 17.3 points per game for Class 4A champion Hawks. College: Minnesota

Olivia Olson, Benilde-St. Margaret’s, G, 6-1, sophomore: Stock climbs every year. She is ranked No. 3 in the country in the Class of 2024 by HoopGurlz. College: Undecided.

1. Hopkins: The Royals should have plenty of motivation after their 78-game winning streak, tied for longest in state history, ended in the Class 4A semifinals last season. There isn’t a team with more individual talent.

2. Chaska: The Class 4A defending state champion welcomes back its top two scorers and three starters. The team also will have depth, with 11 varsity players returning from that 18-0 squad of a year ago.

3. Minnetonka: Coach Leah Dasovich’s group is coming off a 15-5 season, four of the losses (two each) against Hopkins and Chaska. Senior guards Kiani Lockett and Desiree Ware and freshman forward Aaliyah Crump will be counted on offensively.

4. Wayzata: First-year coach Julie Stewart inherits a program with the best senior guard in the state in Mara Braun. Two other starters return along with junior forward Abby Krzewinski, who started as a freshman but missed last season with a torn ACL.

5. Eden Prairie: The Eagles’ presence here indicates how tough the Lake Conference will be in 2021-22; it holds four of the top five spots in the Metro Top 10. Senior forward Nia Holloway, a Gophers recruit, will have to shoulder more of the offensive burden for Eden Prairie to move up.

6. Stillwater: It’s the second Metro Top 10 team bringing in a new coach; Tim Peper replaces Willie Taylor at the helm. The Ponies’ leading scorer, Alexis Pratt, graduated, but their next four scorers are back.

7. St. Michael-Albertville: Don’t read too much into the Knights’ 9-9 season in 2020-21. They lost junior guard Tessa Johnson for the season to a broken leg, and she is back in the fold. This is a deep team, and it will benefit from last year’s experience playing without Johnson.

8. East Ridge: The Raptors have beefed up their schedule, and with good reason: They are a team on the rise. They were 15-6 a year ago under former Gophers player Ashley Ellis-Milan, and they have only one senior on the roster this season.

9. Becker (3A): This guard-dominated team will smother opponents defensively. Its downfall is a lack of size, no starter taller than 5-9. Repeating as the Class 3A state champion is a strong possibility.

10. Rosemount: The Irish, the Class 4A state tournament runner-up last year, aren’t going to overwhelm opponents offensively. The South Suburban’s best team will be counting on its defense.