Chaska staves off Rosemount to earn 4A championship

A layup by Kaylee Van Eps in the final seconds gave the Hawks a 45-43 victory in a hard-fought defensive battle from the outset. 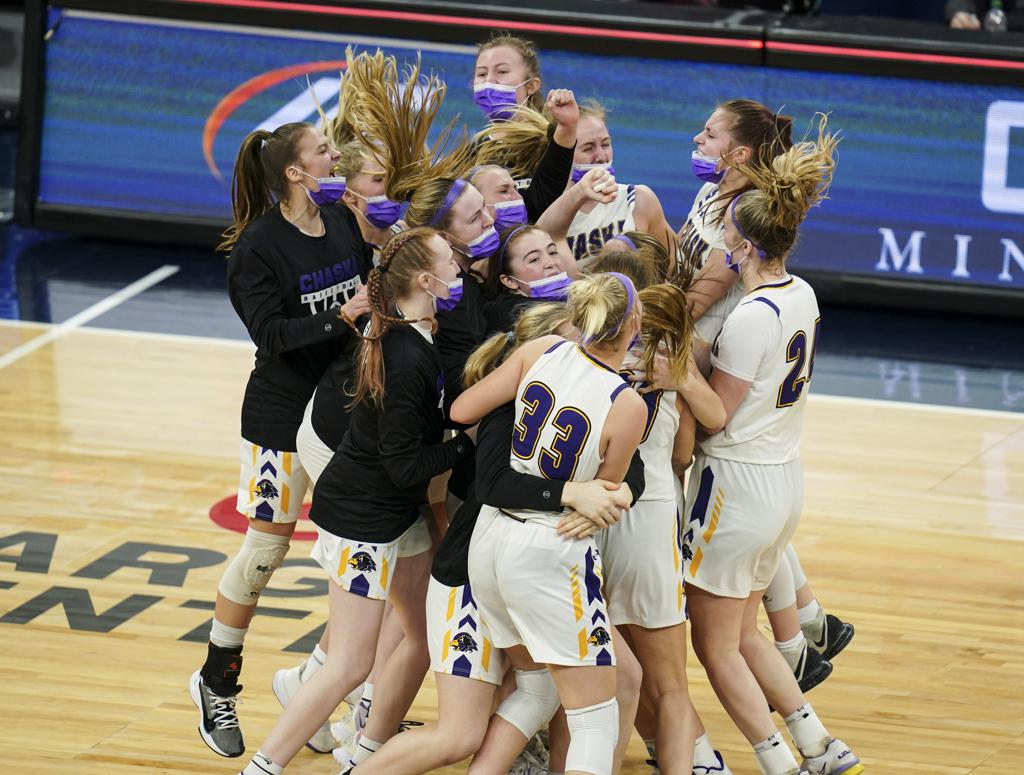 It wasn’t a play Chaska had ever used before. The team installed it just three weeks ago and practiced it often, but held it in reserve, just in case.

The play was simple enough: A high-post pass from forward Mallory Heyer to teammate Kaylee Van Eps, who was making a back-door cut to the basket.

The play worked to perfection Friday at Target Center. Van Eps, a senior guard in the final moments of her final game in a Chaska uniform after a five-year varsity career, took the pass and laid it in with 5.7 seconds left in the game against upset-minded Rosemount. It gave the Hawks a 45-43 victory and the Class 4A championship.

“It was the first time we’ve run it, but we’ve repped it many time in practice,” Chaska coach Tara Seifert said. “I’m just so proud of these girls to be able to finish like they did.”

Van Eps said she had no doubts the play would work when it was called.

Kaylee Van Eps went up for the game-winning basket.

“That’s a play we’ve been trying to get to for awhile,” Van Eps said. “It was the perfect play at the perfect time and Mallory made a perfect pass.”

The way Chaska had dispatched No. 1 Hopkins in the semifinals, many thought defensive-minded Rosemount wasn’t going to present as big a challenge. Instead the Irish, switching between zone and man-to-man defenses, never let Chaska get into its offensive rhythm.

Rosemount slowed the pace and muddied up the game, keeping Chaska close. The Hawks led for most of the game but never by more than seven points, which happened midway through the first half.

Rosemount found its offensive groove in the second half, with senior guard Helen Staley running the show and scoring 14 of her game-high17 points.

“She’s so versatile,” Rosemount coach Chris Orr said of Staley, a Miss Basketball finalist. “She knows exactly what she wants to do out there.”

Consecutive three-pointers by Staley and Nicole O’Neil with seven minutes left put Rosemount (20-4) ahead 37-36, its only lead of the game.

Chaska regained it 39-37 on a clutch three-pointer by Kelsey Willems, her third of the game. “Kelsey came to play,” Seifert said. “She stepped up and handled to pressure.”

When Staley’s off-balance 30-footer at the buzzer barely grazed the rim, Chaska (18-0) had clinched the first state championship in team history.

“We talked about growing up in this game,” Orr said. “To have a shot to win, you can’t ask for much more than that in a state championship game, These girls played their hearts out.”

Seifert discussed the significance of having Van Eps make the winning basket.

“She has the highest basketball IQ of any player I’ve ever coached,” she said. “She so unselfish, she’ll do anything you need her to do. She’s put her heart and soul into building the culture here. For her to have the chance to hit the game-winner, it’s really satisfying.”

Afterward, amid a team celebration, Van Eps reflected on her career.

“This whole week, I’ve been reminding myself that I’ve played with many of these girls since fourth grade,” she said, her voice cracking with emotion. “It’s weird, me getting the last shot. I’m just so proud of what we did tonight and what we’ve accomplished all season.

Kaylee Van Eps scored on a back-door layup with 5.2 seconds left to break a tie and lift Chaska to a 45-43 victory over Rosemount in the Class 4A championship.

Chaska (18-0) fought off a sturdy challenge from Rosemount, which tied the game Friday at Target Center with 12 seconds left on a basket by forward Tayah Leenerts.

The Hawks then took a timeout and set up the game-winning play. They got the ball to Mallory Heyer at the high post and she found Van Eps, who was cutting to the basket, with a bounce pass for the game-winning points.

After defeating No. 1-ranked Hopkins in the semifinals, Chaska players were muted in celebration, knowing they had one more game left to reach their ultimate goal.

The Hawks struggled to figure out Rosemount’s defense for most of the game, unable to generate the type of good shots they had in the semifinals.

Rosemount (20-4), with senior Helen Staley running the show, found its offensive rhythm in the second half and never letting Chaska get on a run. Rosemount took its first lead, 37-36, after back-to-back three-pointers by Staley and Nicole O’Neil with seven minutes left in the game.

Chaska retook the lead for good, 39-37, when Kelsey Willems hit her third three-pointer of the game.

Chaska wasn’t able to solve Rosemount’s switching defenses in the first half in the manner it did against Hopkins, when it used the dribble-drive to break down the Royals' defense.

Faced with Rosemount’s zone defense on one trip down court and man-to-man pressure the next, Chaska played at a tempo much more to Rosemount’s liking.

While the Hawks were forced to play a more methodical game, their superior firepower helped them build an early lead they didn’t relinquish.

With Chaska’s top trio of Heyer and guards Van Eps and Sanders drawing considerable attention from the Rosemount defense, Willems stepped in to fill the offensive void.

She scored eight consecutive points, including two three-pointers, as the Hawks built first-half leads of 10-4 and 14-7.

Rosemount’s determination to muddy up the game began to have the desired effect shortly thereafter, and the Irish cut the deficit to two with a 5-0 run.

But five quick points from Van Eps, a five-year starter, expanded the lead to 19-12. A late back-door layup by Rosemout’s Alexa Ratzlaff made the score 19-14 at halftime.