Girls’ championship games offer challenges we’re not backing down from

A look at the matchups on Friday in all four classes, and predictions on who will leave with the gold medals. 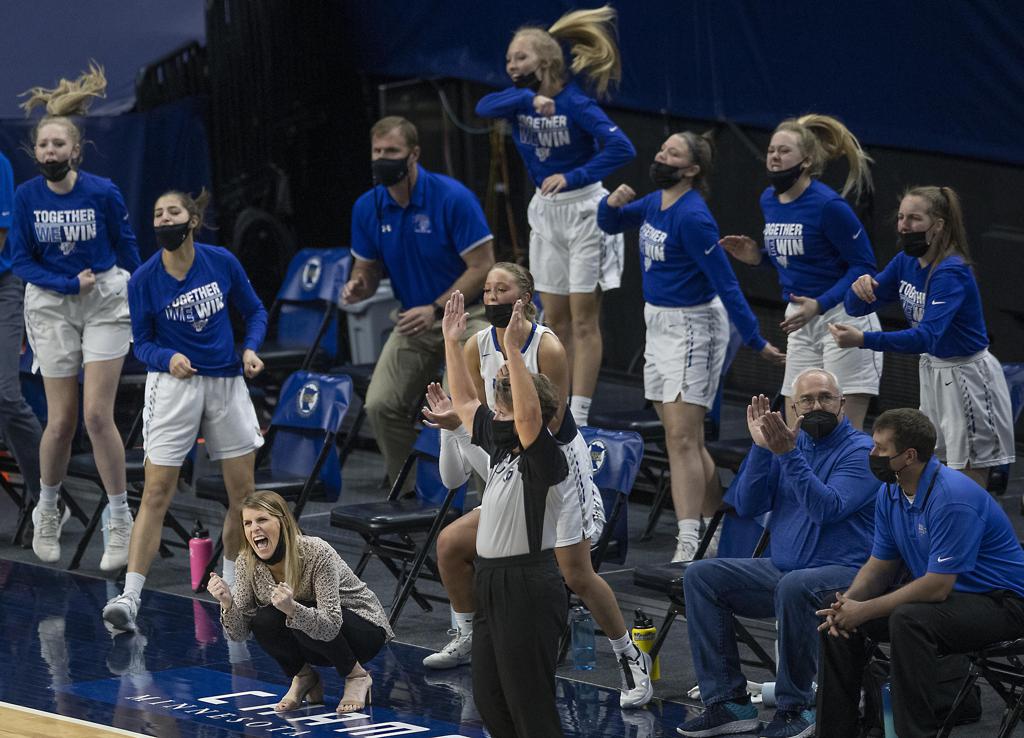 Belgrade-Brooten-Elrosa's bench reacted to a three-point shot on Tuesday. The team plays veteran Minneota for the Class 1A championship on Friday. Photo: ELIZABETH FLORES • liz.flores@startribune.com

Hardware on the line means I have to be better with my selections.  A 17-7 mark at this point in the girls’ tournament comes with five of the eight No. 1 seeds having been ousted. The expectation now: Go out with four more wins Friday at Target Center.

Class 4A Chaska (17-0) vs. Rosemount (20-3), 8 p.m.
There isn’t a bigger underdog than Rosemount. Ever since coach Chris Orr started inundating his players with “We’re going to win” text messages, the Irish can’t lose. One more victory and he might just break out singing “I’m a Believer” over a loudspeaker down Hwy. 3 on his way back to school. Chaska is coming off the most impressive performance in the state tournament, knocking off Hopkins — the state’s most talented team — and halting its state-record-tying 78-game winning streak in the semifinals. Coach Tara Seifert’s unbeaten squad has been underappreciated all season, not even landing one of the two No. 1 seeds in the state field. This group will not suffer a letdown. The Hawks soar to their first state title.

Class 3A Becker (18-3) vs. Marshall (22-0), 6 p.m.
Becker has been aiming at this opportunity, winning a state crown, since March 12, 2020, when it won its semifinal game. Then the coronavirus pandemic shut down the state tournament a day later, denying the Bulldogs their chance. This time they’re up against a state tournament mainstay the past 20 years. The game pits two Miss Basketball finalists against each other — Julia Bengtson of Becker and Jordyn Hilgemann of Marshall. In a fun and entertaining matchup, Becker prevails.

Class 2A Albany (23-1) vs. Providence Academy (22-1), 3 p.m.
Albany’s Paige Meyer has won me over more than any player in the state tournament. She is fundamentally sound on both ends of the court. The Huskies haven’t had a close game in the state tournament largely in part because of the South Dakota State recruit.  Providence Academy’s young and talented starting lineup includes a seventh-grader, freshman, sophomore and junior. Albany’s only loss came was to New London-Spicer, — a team the Lions topped in the semifinals — a little more than a month ago. I’m taking Providence Academy in its third consecutive nip-and-tuck game.

Class 1A Belgrade-Brooten-Elrosa (23-1) vs. Minneota (24-0), 1 p.m.
Both teams reached the final with one-point victories in the semifinals. The Jaguars of Section 5 have been one of my nemeses this year. They just might be using my selection against them as motivation. Coach Kristina Anderson’s squad likes to get up and down the court quickly as does Minneota. They are two of the higher-scoring teams in Class 1A. The biggest difference: Minneota is a two-time state champion and has plenty of big-game experience. Championship day kicks off with a Viking victory.