The Irish prevailed 40-33, scoring just 13 points in the second half while holding the Cougars to one field goal. 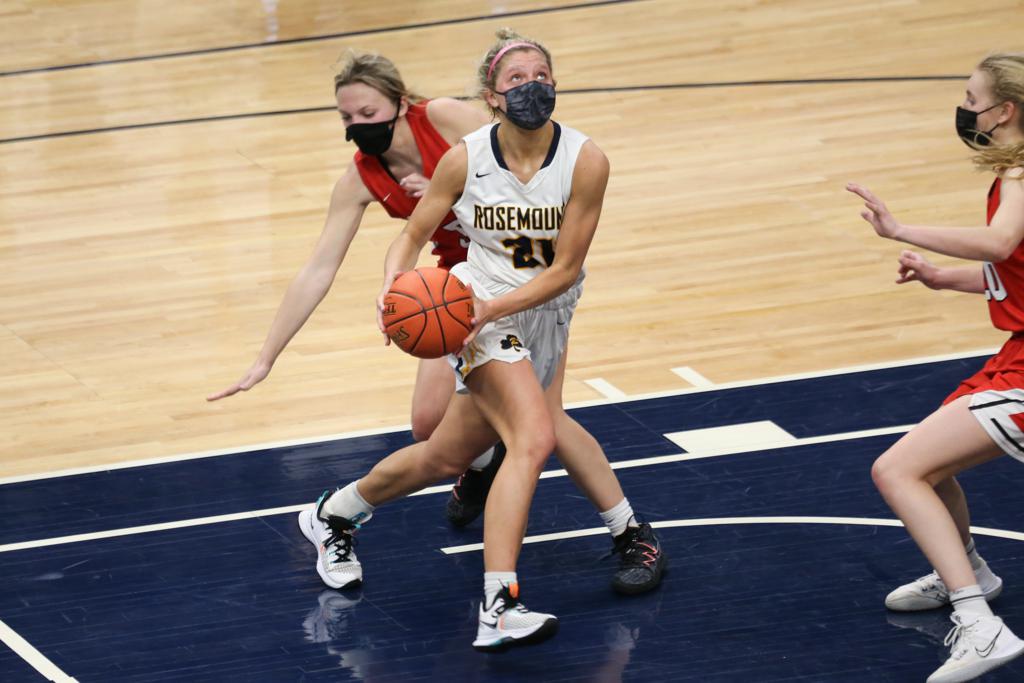 Rosemount's Alexa Ratzlaff (21) looks for room under the basket against Centennial Wednesday night. Ratzlaff had nine points in the Irish’s 40-33 victory over the Cougars. Photo: Jeff Lawler, SportsEngine

The Irish don’t score a lot of points but the team plays pretty ferocious defense. Rosemount’s calling card all season lifted the Irish to a 40-33 victory over Centennial in the Class 4A semifinals.

Nicole O’Neil scored 10 points, all in the first half, the only player in the game to reach double figures, to give Rosemount (20-3) a 27-25 at halftime. 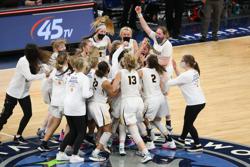 In the second half, the Irish cranked up the defensive pressure. They forced Centennial to take poor shots and held the Cougars to just one field goal and eight points.

“There was a point in the game where I joked with the girls that the first team to score 40 wins and look, it worked out,” Orr said with a laugh. “We know we’re not going to be the prettiest team, but we are going to play our hearts out, play great defense and score just enough to finish the job.”

Centennial’s only field goal of the second half, a layup by Jenna Guyer less than minute into the half, tied the score 27-27. Rosemount regained the lead for good on a three-pointer by Alexa Ratzlaff a minute later.

More than three minutes later, Rosemount’s Helen Staley hit a three for a 33-27 lead. Neither team made a shot from the floor over the next 11-plus minutes.

Centennial used free throws to cut the Rosemount lead, trimming it to one when Jodi Anderson hit two with 2:26 left. Those were the last two points of the game for Centennial (21-2).

Ratzlaff’s layup off an inbounds play with 1:34 left gave Rosemount a 36-33 lead. Tayah Leenderts added a layup a minute later and Ratzlaff added two free throws in the final seconds for the final score.

“We’ve had a few of those episodes,” Orr said of his team’s difficulty scoring. “But we know you can always control how tou play defense. I couldn’t be more proud of these kids. This is their one shining moment.”

Offense may have been in short supply after halftime, but all that mattered to Rosemount is that when the game ended, the Irish had more points than Centennial.

Rosemount pulled out a 40-33 victory over the Cougars to advance to the Class 4A championship game on Friday.

After a closely played first half, which ended with Rosemount up 27-25, solid defense and poor shooting was the story in the second half. The two teams combined for just 21 points after halftime, just eight for Centennial. Rosemount made four field goals in the second half, Centennial one.

Nicole O’Neil scored 10 points to lead Rosemount and was the only player on either team to score in double figures.

The Irish (20-3) will play for a state championship for just the second time in team history. The Irish were runners-up for the Class 2A title in 1988.