The pandemic, and justice issues raised by George Floyd’s death, ‘‘made me realize how precious time is and all the things I might not have time for,’’ the senior said. 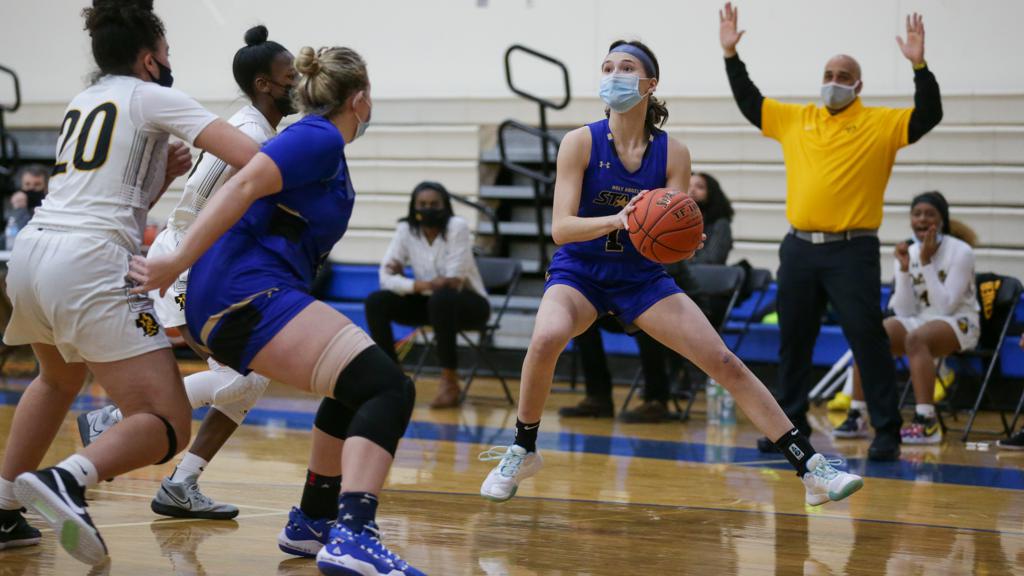 Frankie Vascellaro (1) of Holy Angels against DeLaSalle on Feb. 21. “I’d still like to keep the door open, because I love the sport so much, but I have other interests and passions I’d like to explore and expand on.” Photo: Jeff Lawler, SportsEngine

Francesca Vascellaro — call her Frankie, please — is a senior and has been an on- and off-court leader for Holy Angels for five years.

A versatile guard who can knock down the jumper and create off the dribble, Vascellaro has helped the Stars to five consecutive state tournament berths. She was a Star Tribune All-Metro second-team selection just last week, averaging 18 points and 5.6 rebounds a game for the Stars, who meet Marshall on Tuesday in the Class 3A tournament semifinals.

A successful basketball career for someone just 18, without question.

Yet something was nagging at her. She had made a name for herself on the court, but there was so much more to her life than putting a ball through an elevated iron hoop. When the novel coronavirus brought things to a standstill last spring, and George Floyd’s death brought social justice issues to the forefront, time weighed on her.

She loved the sport, she reasoned, but not exclusively. Other loves vied for more attention.

Vascellaro came to a decision rarely seen among high-level prep basketball players: She wouldn’t play basketball in college. Maybe in the future. But not now.

“It’s something I’ve had in the back of my mind for a few years now,” Vascellaro said. “I’d still like to keep the door open, because I love the sport so much, but I have other interests and passions I’d like to explore and expand on.”

Playing her guitar, for instance. She’s been playing for more than a decade and it’s become more than just a hobby. And writing, a passion she indulges just about every day. She counts Hemingway and Bukowski among her influences and has built up a sizable collection of poetry.

How would she pursue all of these interests in college, while still maintaining the busy schedule of basketball player.

The answer? She wouldn’t. At least for the short term.

“It’s such a big commitment to play at the collegiate level, no matter what level you play,” said Vascellaro, who was giving serious thought to playing at Division III NYU in Manhattan before her decision. “How would I find the time to pursue school and sports and my other interests?”

Her parents, Frank and Amelia, are on board with Frankie’s choice, although she says dad was slightly disappointed. He held hopes that their children would be collegiate athletes. Older brother Sam played basketball at the University of St. Thomas.

“When I first started playing, all my coaches and even my dad were saying this was for the future and hopefully college,” she recalled. “But with the pandemic, it made me realize how precious time is and all the things I might not have time for.”

Once she made her feelings known, however, support followed quickly.

“[Dad] was a little bummed out, but it helps that my twin brother, Joe, is going play football at St. John’s,” Frankie said, adding “My mom thinks I should write a book. I don’t know about that yet.”

“I was initially bummed out, for sure,” her father said. “But today, I’m fine with it. This decision wasn’t made on a whim. Frankie is extraordinarily intelligent, competitive and strong-willed. She’s going to have those traits moving forward, whether on the basketball court or not. And they’re going to serve her well.”

When the state tournament is over by the end of the week, Vascellaro knows she’ll miss the sport and everything it’s brought to her life. She counts Holy Angels coach Dan Woods among the biggest influences in her life.

“He’s helped me become more confident in my leadership and has supported me since I was a kid,” she said. “I would not be the person or player I am today without him.”

She’s not decided on where she’s headed for college but hasit narrowed down to three schools: DePaul and Loyola in Chicago and the University of Denver.

Wherever Vascellaro lands, she won’t be bringing basketball shoes, but she will be bringing memories.

“Just being in Williams Arena has been really cool,’’ she said “Mostly, it was just meeting all the people and friends I’ve made. And goofing around at practice.”