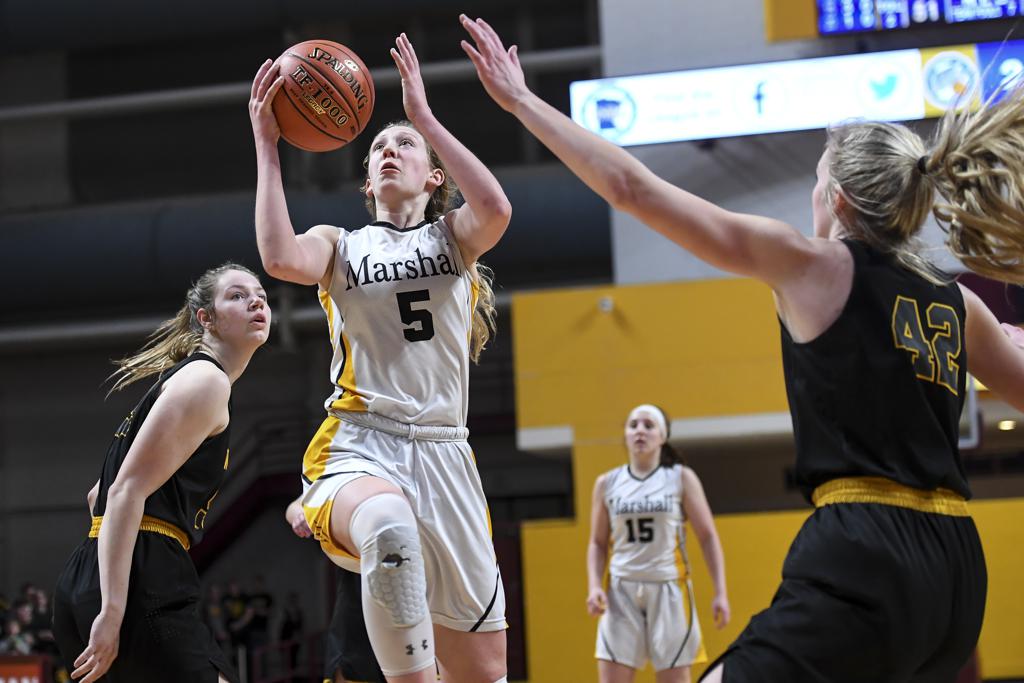 Duluth Marshall guard Gianna Kneepkens (5) scored a basket in the 2020 state tournament, which was shut down before her team could play in the Class 2A semifinals. Photo: Aaron Lavinsky • aaron.lavinsky@start­ribune.com

The girls’ basketball state tournament is normally over by the end of March, but this year it’s just getting started. Most quarterfinal games in all four classes will be played Tuesday at regional sites across the metro area and state.

Then the tournament will pause until next week, with the semifinals resuming Tuesday leading to championship games on April 9. Those rounds will be at Target Center.

Here are 10 things to know about the tournament:

1. Her name is well-known in girls’ basketball circles, but the best player you have likely never seen is Duluth Marshall 5-11 guard Gianna Kneepkens. A University of Utah recruit, the multitalented Kneepkens surpassed 3,000 career points this season and is currently fifth on the state’s list of top scorers with 3,635 points and counting. This season Kneepkens is averaging 41.6 points per game this season, has topped 50 four times and has not had a game under 25 points.

2. Providence Academy’s leading scorer is seventh-grader Maddyn Greenway. The 5-6 guard is averaging 20.9 points per game with a high of 34, which came in the Lions’ 74-47 victory over Southwest Christian in the Class 2A, Section 5 championship game. If her last name sounds familiar, it should. She’s the daughter of former Vikings linebacker Chad Greenway.

3. Greenway isn’t the only star player with well-known parents. Class 3A Holy Angels’ slashing guard Francesca Vascellaro is the daughter of WCCO-TV’s husband-and-wife anchor team of Frank Vascellaro and Amelia Santaniello. Vascellaro is averaging 18 points and 5.6 rebounds per game.

5. Hopkins is making its 15th state tournament appearance, all since 2002, and has won seven state championships over that span. If the Royals win another, they will tie Rochester Lourdes for the most by a single program.

7. New London-Spicer’s Mike Dreier is the winningest coach in state girls’ basketball history and is bringing a team to the state tournament for a record-setting 19th time. Dreier currently has 983 career victories. The Wildcats have played in eight championship games, winning in 1997 and 2002.

8. Stillwater’s Willie Taylor has brought three programs to the state tournament. He coached Mounds View to a tournament berth in 1994, St. Paul Central to six appearances from 2001 to 2013, winning in 2007 and ’08, and now has Stillwater in the tournament for the third consecutive season.

10. Mountain Iron-Buhl’s Jeff Buffetta is the coach for both the girls’ and the boys’ teams. The girls are making their ninth appearance in the past 10 years. The Rangers boys did not qualify for the state tournament.