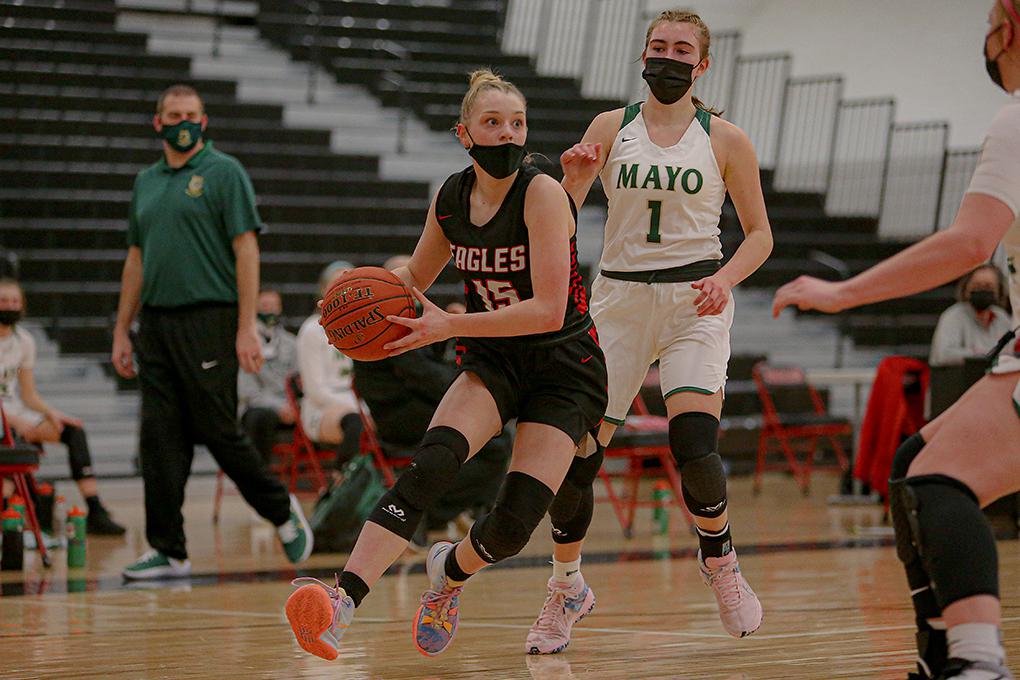 Eden Prairie coach Ellen Wiese has been picking the moments, careful not to thrust too much on the shoulders of an eighth-grade athlete too soon. But Tori Schlagel showed Saturday in the Eagles' 92-59 victory at home over Rochester Mayo that she is ready to pick up the pace of her apprenticeship.

Schlagel scored 10 points in the first half as the Eagles (13-5) sprinted to a 50-23 halftime lead over a Spartans team that had been unbeaten and ranked No. 6 in Class 4A less than two weeks ago. The eighth-grade guard finished with a career-high 14 points and was one of four Eden Prairie players to score 14 or more points.

"I am very careful with the young kids," Wiese said. "I want to bring them along slowly and don't want to overwhelm them. That was my plan [for Schlagel] from the beginning."

The results make that a hard case to beat. Schlagel had played in 15 varsity games before Saturday, scoring a total of 50 points. She now gives Wiese and the Eagles, ranked No. 9 in Class 4A by Minnesota Basketball News, one more solid scoring option on a team full of them. Eight players had season-highs of 12 points or more before Saturday. 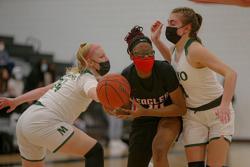 "I think [Schlagel] is just super good," said Lenz, who also began her varsity career as an eighth-grader and now, as a sophomore, is by experience both a cheerleader and mentor for Schlagel. "I just try to keep her confidence high by supporting her.”

Lenz sparked the first-half surge for the Eagles with her ball handling and defense, forcing turnovers and getting the ball to Bursch and Miranda, who made four of her five three-point baskets in the first half.

The Eagles' defense was just too much for the Spartans (13-3), who dominated on the boards but turned the ball over too many times for it to make a difference. "We didn't handle the pressure well," said Spartans coach Ryan Carpenter. "We turned it over way too many times.

"But that's why we scheduled this game. We need to play better teams to get better. And we got better with the experience tonight."

The Spartans were supposed to play Big 9 Conference rival Austin on Saturday but the game had been canceled. Eden Prairie, meanwhile, had only 17 regular-season games scheduled and had one left to fill out the maximum number of 18, so the teams agreed to play on the final day of the regular season.

Wiese said her team's goal was to shut down Anna Miller, the Spartans' 6-3 senior center. Miller scored a game-high 22 points, but she had to work hard for her points. She had just two baskets in the first half but went 7-for-8 from the free-throw line.

Eden Prairie, which finished third in the Lake Conference standings behind Hopkins and Minnetonka, heads into the Class 4A, Section 2 tournament, a bracket which includes the No. 6-4A Skippers but not the No. 1-4A Royals. With the solid showing against a formidable Mayo team that won 12 consecutive games earlier this season, and the emergence of Schlagel, the Eagles are headed to the postseason with a positive feeling.

"If we play like this [in the section tournament], I'm feeling really good," Wiese said. 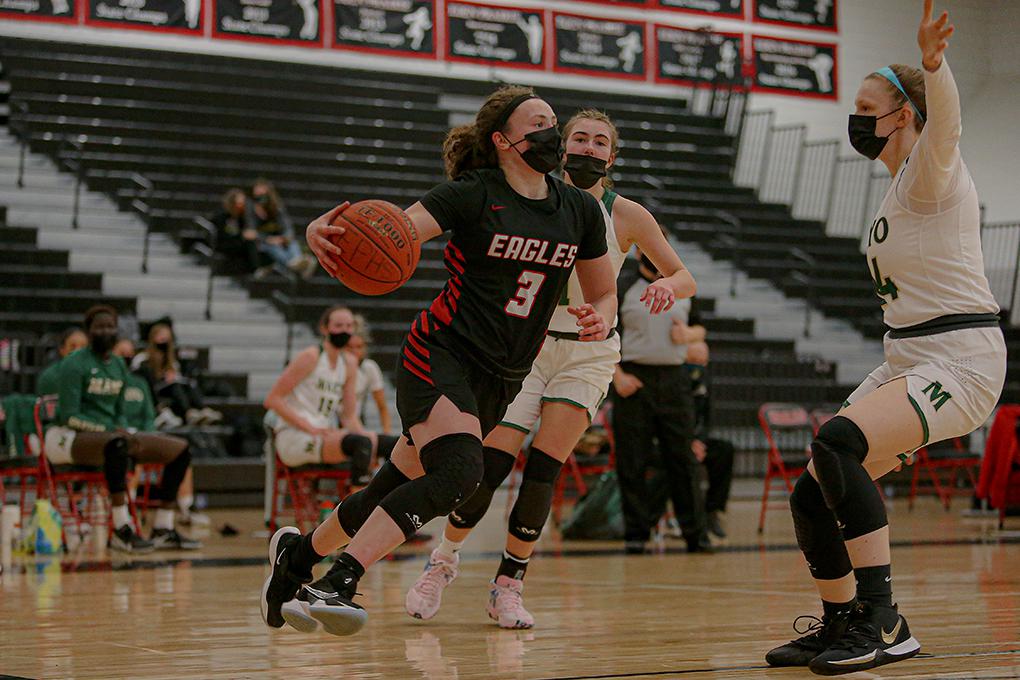 Four players scored 14 or more points for Eden Prairie Saturday, helping the Eagles soar past Rochester Mayo 92-59 at Eden Prairie High School in what was the final regular-season game for each team.

The Eagles (13-5) had been looking for an 18th game and a solid tuneup for the postseason and found it when Rochester Mayo, which opened the season with 12 consecutive victories and climbed as high as sixth in the Class 4A rankings by Minnesota Basketball News before falling out of the top 10 this week, had a Big 9 Conference game against Austin canceled.

Sophomore Molly Lenz had a team-best 16 points for Eden Prairie, while seniors Allison Miranda and Destinee Bursch chipped in 15 and 14 points, respectively. Eighth-grader Tori Schlagel scored 10 points in the first half for the No. 9-4A Eagles and finished with a career-high 14 points. 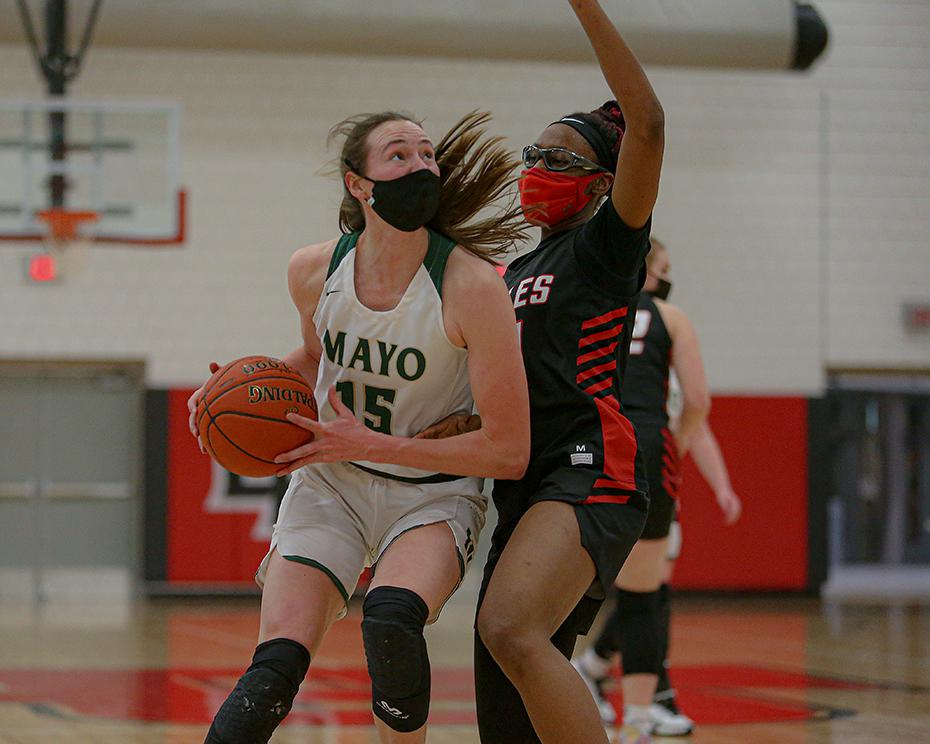 Anna Miller makes a move on Eden Prairie defender Nia Holloway in the first half. Miller scored a game-high 22 points for the Spartans. Photo by Mark Hvidsten, SportsEngine