After just scoring two points in the opening half, Mallory Heyer went off for 16 points to help her Hawks rally back to beat the Trojans. 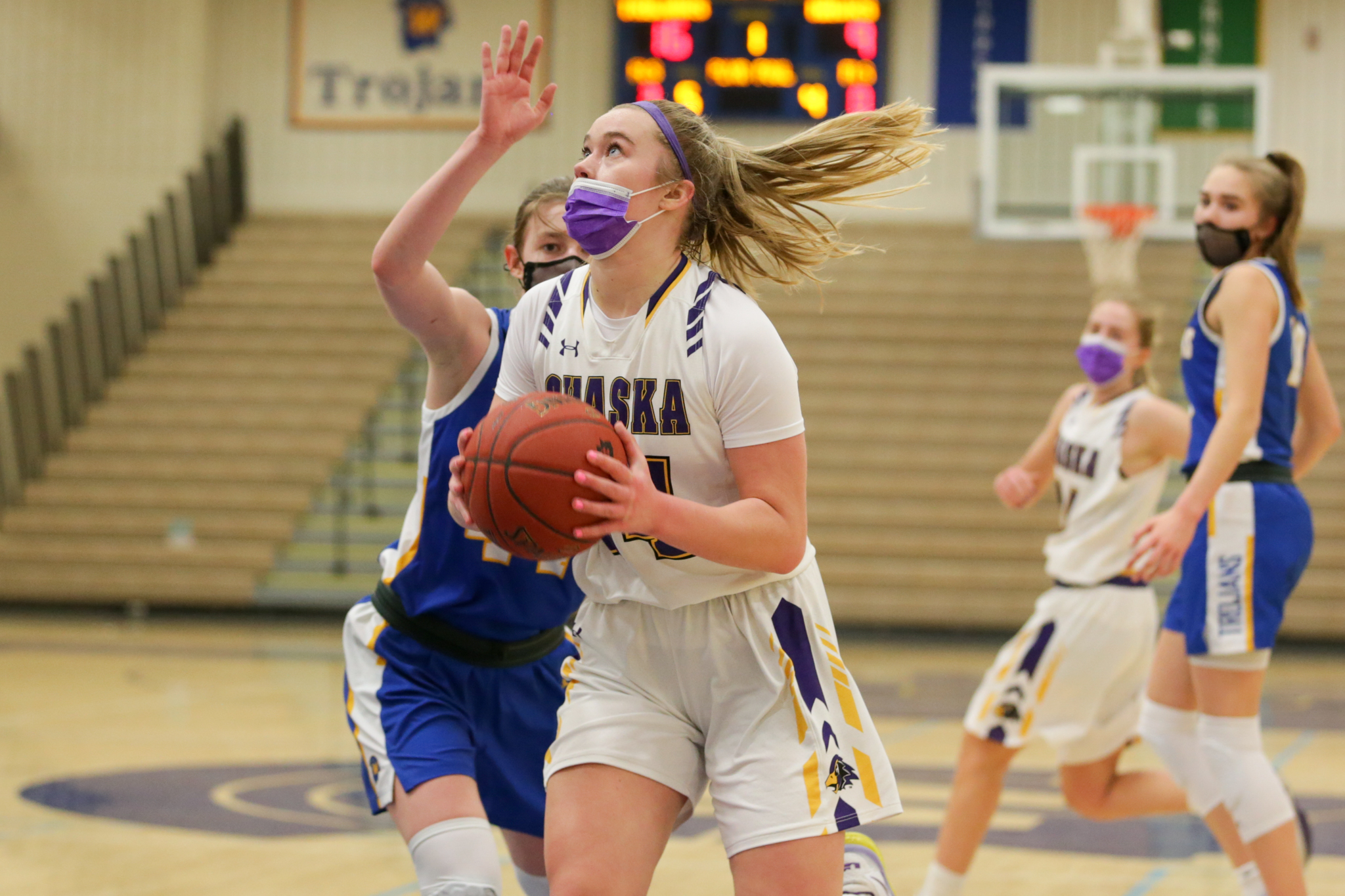 Chaska's Mallory Heyer spins for a layup against Wayzata Friday night. Heyer had a team-high 18 points in the Hawks’ 61-59 victory over the Trojans in Wayzata. Photo by Jeff Lawler, SportsEngine

Before answering questions following Chaska’s win against Wayzata on Friday, Hawks coach Tara Seifert joked that “her heart was still up in her throat” after her team edged out the Trojans for a two-point victory.

That isn’t a feeling Seifert or the Hawks have had to deal with much this year. Coming into the matchup, Chaska had won each of its first 11 games this season by an average of 31 points per game and had triumphed just once by single digits.

That number grew to two on Friday. After falling behind early, Chaska soared to a 61-59 victory over the Trojans at Wayzata High School to stay unbeaten this winter.

Besides the deficit being so low compared to other games, the Hawks, ranked No. 3 in Class 4A by Minnesota Basketball News, didn’t have their regular offensive output when facing No. 7-4A Wayzata. Chaska had scored 70 or more points in every game this season until meeting the Trojans.

That output was low thanks, in part, to a slow first half for the Hawks (12-0) offensively. They put up just 26 points in the game’s opening half with 6-foot-1 junior forward Mallory Heyer, who came into the game averaging a team-high 23.9 points per game, scoring just two points in the first half.

On the other side, the Trojans (7-5) used their zone defense to force Chaska into shooting, allowing the home team to take a nine-point lead into halftime. Wayzata senior Jenna Johnson, a 6-foot-2 forward, led the way with 13 points in the first half. The Utah commit finished with 17 points, joining teammate Mara Braun who had a game-best 20 points. 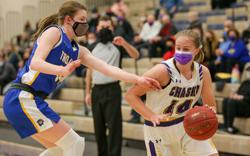 “We disrupted their offensive rhythm pretty well,” said Wayzata coach Mike Schumacher. “They didn’t score as efficiently as they have been.”

Early in the second half, however, it appeared that Chaska had started to find its shooting rhythm. Senior guards Kayla Hendrickson and Kelsey Willems each knocked down three-pointers early in the half as part of a 13-2 Hawks’ run that put Chaska ahead for the first time since early in the contest.

“It’s amazing that when your team makes a few shots, the confidence starts to go in the right direction,” Seifert said. “We talked about how we needed to step up and shoot. We had to prove that we could score from the outside.”

“[Heyer] has one of those motors where a lot of times, her second half is better than her firsts,” Seifert said. “She was cutting hard all night on passes looking for the ball.”

Besides scoring, Heyer was part of a Hawks defensive group that didn’t allow Wayzata to score in the game’s final two minutes. Aside from Heyer, Chaska senior guard Kaylee Van Eps blocked a potential go-ahead three-pointer in the final seconds. Junior forward Kendall Karrmann also pulled down a key rebound to keep the ball away from the Trojans.

“To have those big plays, it can be a momentum swing,” Seifert said. “We talked a lot this year about improving our defense and I thought we did that in the second half.”

After a number of possessions late, the Trojans failed to get a shot off in their final possession. With that, Chaska’s perfect record remained intact for another night and many on the Hawks’ side let out a sigh of relief.

This was just the second game Chaska played this winter against a team that’s currently in Class 4A’s top-10 rankings. The Hawks defeated No. 8-4A Minnetonka 71-66 on Feb. 12.

“This group is still really hungry,” Seifert said. “We want to see if we can compete with Hopkins and some of the top teams. I think it was a big step to come into Wayzata and win.”

Seifert’s squad won’t have to wait much longer to measure themselves against the No. 1-4A Royals. Chaska plays Hopkins next Thursday. 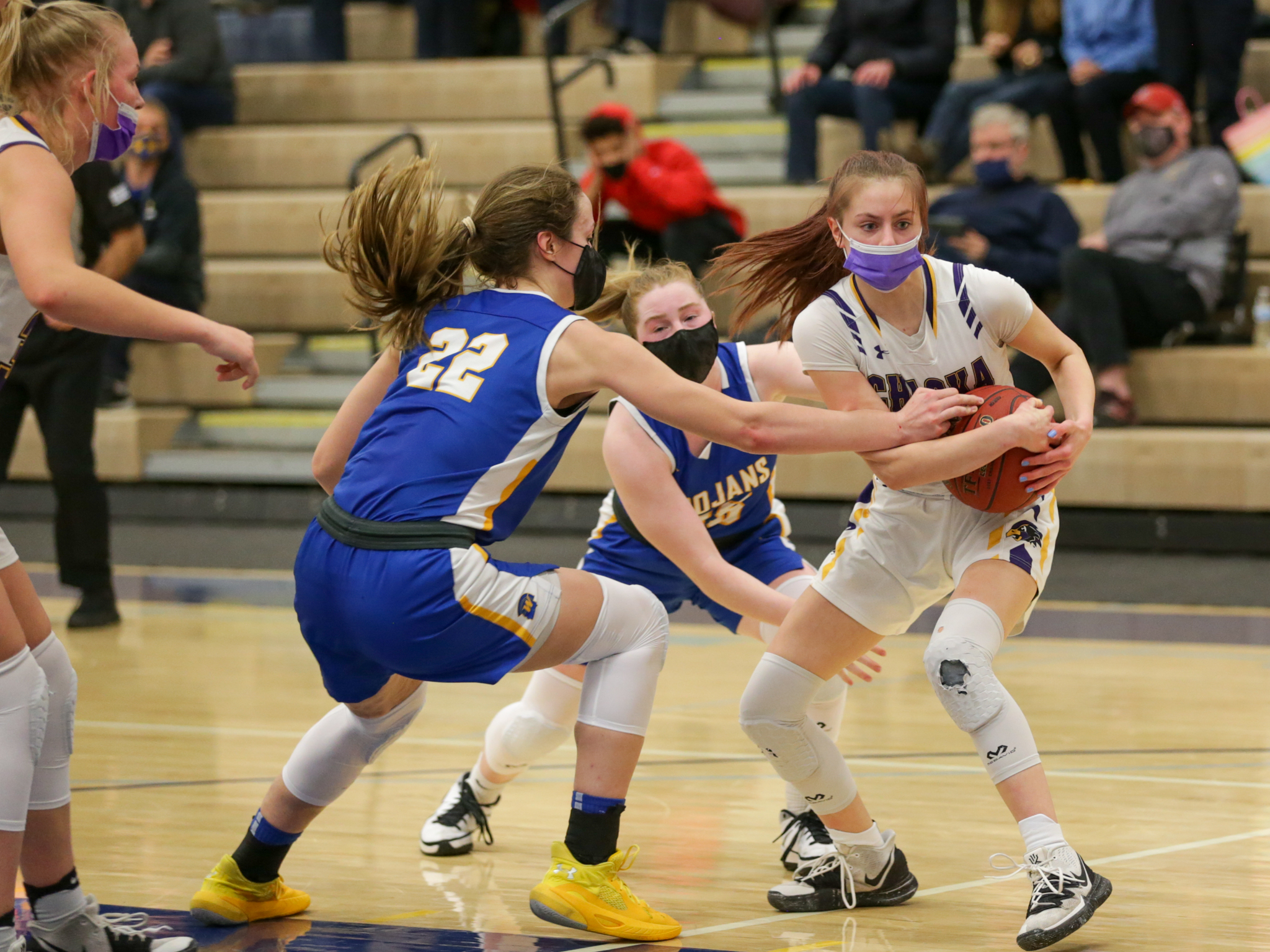 Chaska's Kelsey Willems secures a defensive rebound late in the game against Wayzata. The Hawks rallied in the second half for a 61-59 victory over the Trojans. Photo by Jeff Lawler, SportsEngine

Trailing by nine points at halftime, Chaska soared in the second half and rallied to defeat Wayzata 61-59 on Friday at Wayzata High School to stay unbeaten this season.

Part of the problem in the first half for the Hawks, ranked No. 3 in Class 4A by Minnesota Basketball News, was the lack of scoring from Mallory Heyer, the team’s top scorer. The 6-foot-1 junior forward and University of Minnesota commit, who averages 23.4 points per game, was held to just two points in the first half.

Sophomore point guard Kennedy Sanders helped pick up the slack with a team-high nine points in the first half and finished with 13 points for Chaska (12-0).

Heyer found her scoring touch in the second half, however, and poured in 16 points to give her a team-high 18 points on the night. Heyer and Sanders were two of four Hawks to finish in double figures.

The No. 7-4A Trojans managed to hold things down defensively while getting contributions on the offensive end of the floor from senior forward Jenna Johnson and junior guard Mara Braun. Johnson, a 6-foot-2 Utah commit, had a game-high 13 points in the opening half and finished with 17 points. Braun, meanwhile, scored 10 points in each half to finish with a game-high 20 points. She also had six rebounds for Wayzata (7-5). 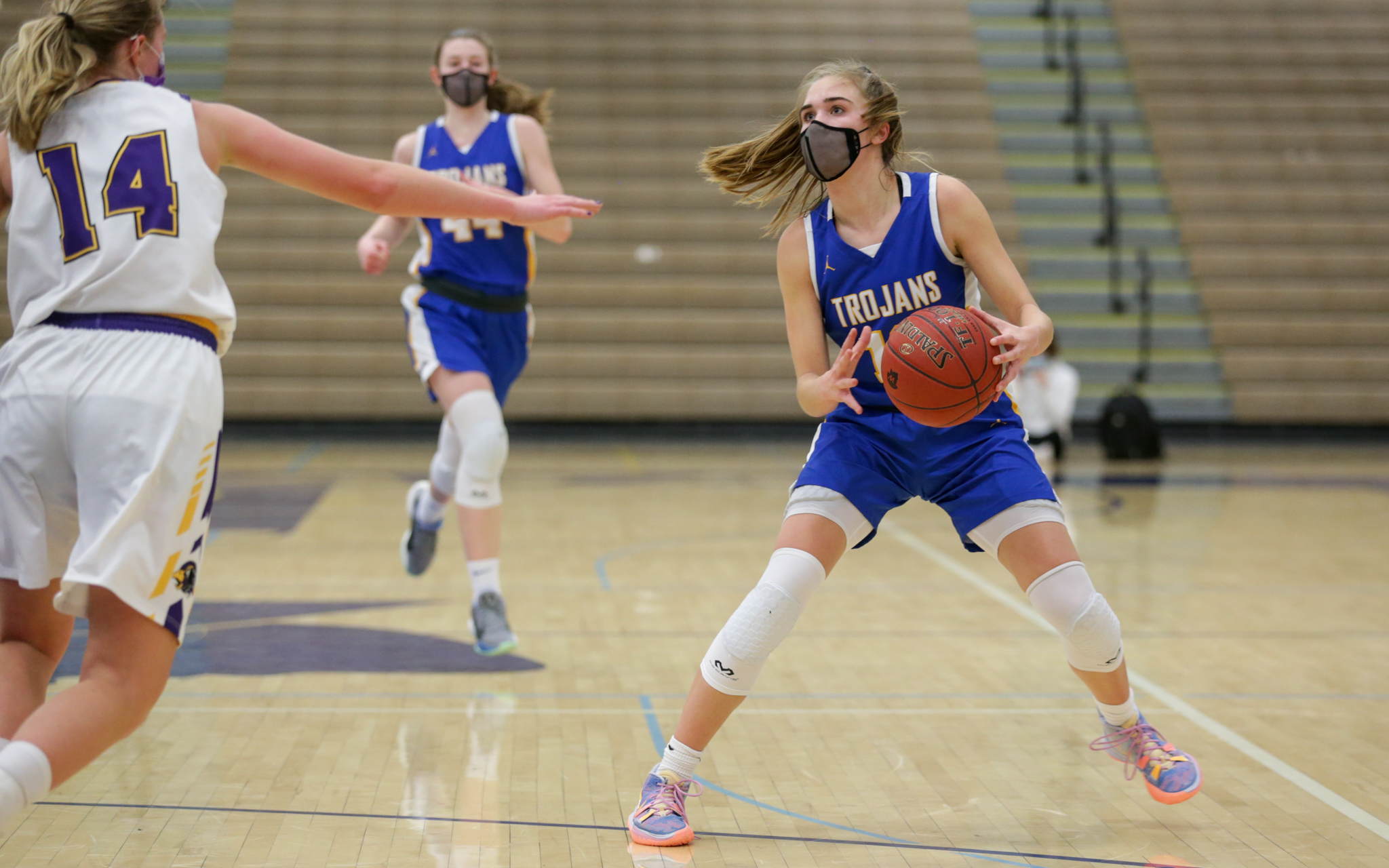 Wayzata's Mara Braun pulls up for a long jump shot against Chaska Friday night. The Trojans fell to the Hawks 61-59 despite Braun’s game-high 20 points. Photo by Jeff Lawler, SportsEngine