The Cougars had just 14 points at halftime but clawed back with 49 second-half points to get the victory over the Crimson. 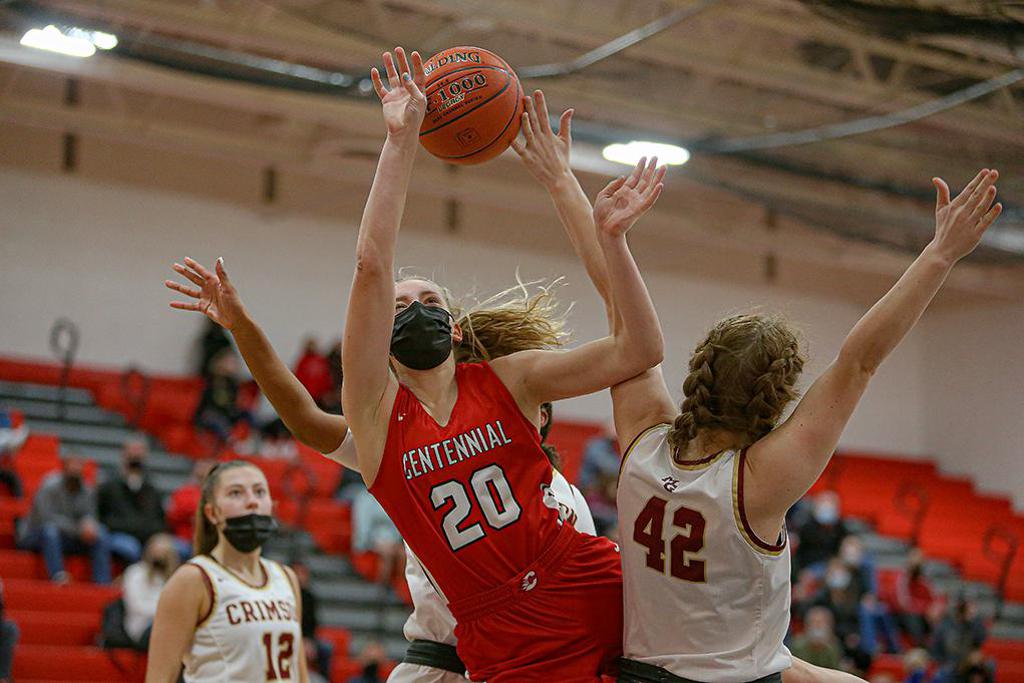 Teams playing well at the right time near the end of a season can be key. Or at least it makes a good talking point. On a smaller scale, Centennial girls’ basketball picked the exact right time of the game to play its best basketball against Maple Grove.

Centennial trailed for most of regulation Tuesday until some clutch three-pointers started falling and provided a lead with a little more than 3-1/2 minutes to play.

“We’re never out of the game,” said Centennial senior guard Jodi Anderson. “We’re never going to give up on a game.”

Never giving up served the host Cougars (11-1, 7-0) well as they pulled off the come-from-behind 63-60 victory in overtime against Northwest Suburban Conference rival Maple Grove. The Cougars didn’t even let a buzzer-beating three-pointer at the end of regulation from Maple Grove sophomore Kennedy Klick stop their momentum. 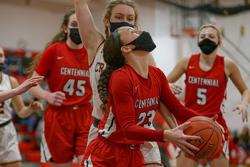 Centennial, ranked No. 4 in Class 4A by Minnesota Basketball News, led 4-3 early before trailing most of the way, in the neighborhood of 10 points. The Cougars trailed 24-14 at halftime but were never out of the game and stayed close in the game full of tight defense.

The Cougars were down by eight late in the second half when the ice-cold shots turned red-hot. Anderson hit a pair of three-pointers to get her team within two, the closest the game had been since the start. After a timeout and a bucket from Maple Grove, Megan Stacy, a Centennial sophomore guard off the bench, drained back-to-back three-pointers about 30 seconds apart for a 47-45 Centennial lead.

“Those three-shots from Jodi and Megan, the two from Megan, that just really put us ahead and it got us pretty hyped,” said Centennial senior center Jenna Guyer. “We were in the zone.”

Those four long-range shots were quite the contrast to earlier in the game for Centennial. As the Crimson built up a 14-6 lead, the Cougars missed seven three-pointers during that stretch and missed 10 in the first half. Anderson made the lone triple in the first half but not until there was 1 minute, 22 seconds left until the break to make it a 24-14 game deficit.

Once Centennial took the lead late in the game, it never gave it back.

“I’m so glad we just kept pushing through,” Anderson said. “Just have to keep shooting. They’ll fall. We’ve just got to keep focusing, that’s going through my head the whole time.”

The tight game grew even tighter down the stretch, where free throws became the key. Centennial junior guard Camille Cummings made her shots from the line with 52.1 seconds left for a three-point lead. Guyer followed suit with 4.8 seconds left to go up 53-50 before the buzzer-beater sent the game to overtime.

Eight of Centennial’s 10 overtime points came at the free-throw line, capping a 14-for-14 team effort at the line from the second half on. Contrast that to Maple Grove, which went 3-for-8 from the line after giving up the lead late.

“Ice in their veins when it comes to those clutch free throws,” said Centennial coach Jamie Sobolik. “And not a lot of rim on a lot of them either. So that was nice to see, especially when we struggled with free throws in the first half, too.”

Centennial made 3-of-7 free throws in the first half.

In overtime, Centennial took a four-point lead and Maple Grove didn’t score until there were less than 30 seconds left of the four-minute overtime period. It was a six-point game at the end, but Klick came through with one more three-pointer with a couple seconds left.

One of those players with “ice in her veins” Tuesday, going 4-for-4 from the line in overtime, was Marisa Frost. She celebrated her 15th birthday Tuesday and finished second in scoring for Centennial with 11 points.

It’s the third game the freshman guard has started for the Cougars, and Sobolik was impressed with her ability to create openings on offense and also her defense in the latter part of the second half.

“She might not have got a lot of steals, but she was getting tips,” Sobolik said. “She was able to create a lot for us on offense with her ability to get to the rim.”

For the No. 6-4A Crimson (10-2, 4-1), senior guard Kylie Baranick led the way with 14 points, while junior Ari Gordon added 11 and eighth-grader Jordan Ode scored a season-high 10 points. The Crimson are “still learning what life’s going to look like without (senior) Jordyn Lamker,” said coach Mark Cook. Lamker had knee surgery on Friday and is out for the season, according to Cook.

The Maple Grove coach said his team “played their hearts out” and did what they wanted to defensively. But the Crimson's shooting grew cold when Centennial’s turned hot.

“That ended up being the difference in the ball game,” Cook said. “They made some plays down the stretch, and we just didn’t.” 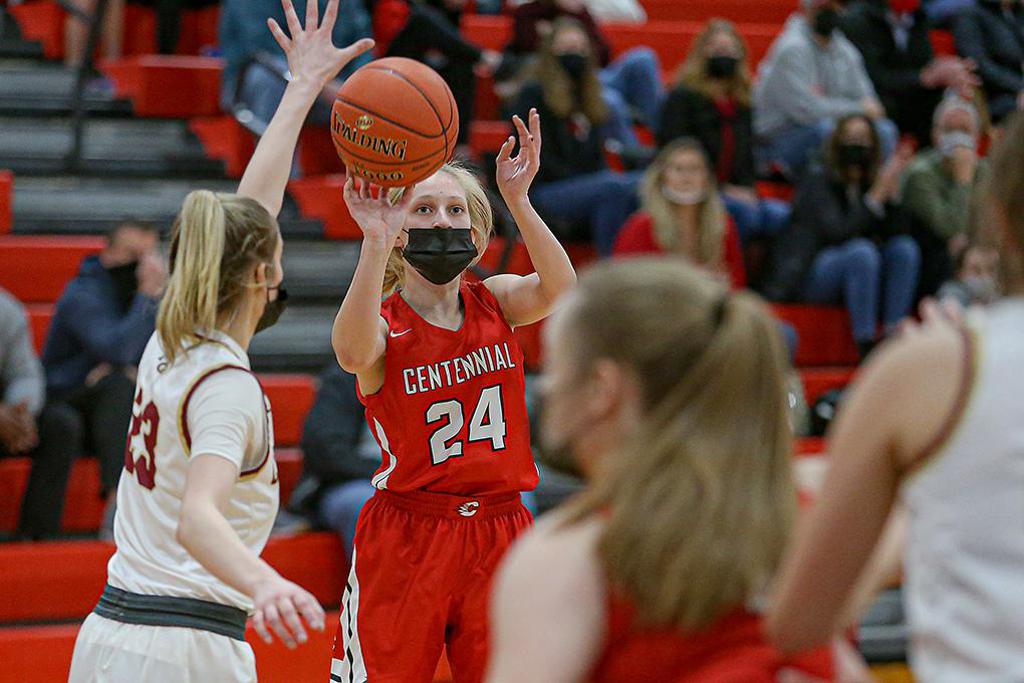 Sophomore Megan Stacy (24) puts up the first of her two three-point baskets late in regulation that gave Centennial its first lead of the game. Photo by Mark Hvidsten, SportsEngine

A tight, defensive battle throughout, a buzzer-beater and overtime. Just the type of exciting girls’ basketball game one might expect for a couple of closely ranked teams in Class 4A.

Centennial (11-1, 7-0), ranked No. 4 in Class 4A by Minnesota Basketball News, came back from a 24-14 halftime deficit to defeat Northwest Suburban Conference rival and No. 6-4A Maple Grove 63-60 in overtime Tuesday at Centennial High School.

Centennial trailed for most of regulation until four three-pointers from senior Jodi Anderson and sophomore Megan Stacy gave the Cougars the 47-45 lead with under four minutes to play in the second half. Maple Grove’s Kennedy Klick hit a buzzer-beater from long range to tie it 53-53 and force overtime.

The victory marked Centennial’s first against Maple Grove since Feb. 11, 2019; the Crimson (10-2, 4-1) won both meetings last season. Tuesday's game is the only regular season meeting between the two rivals. 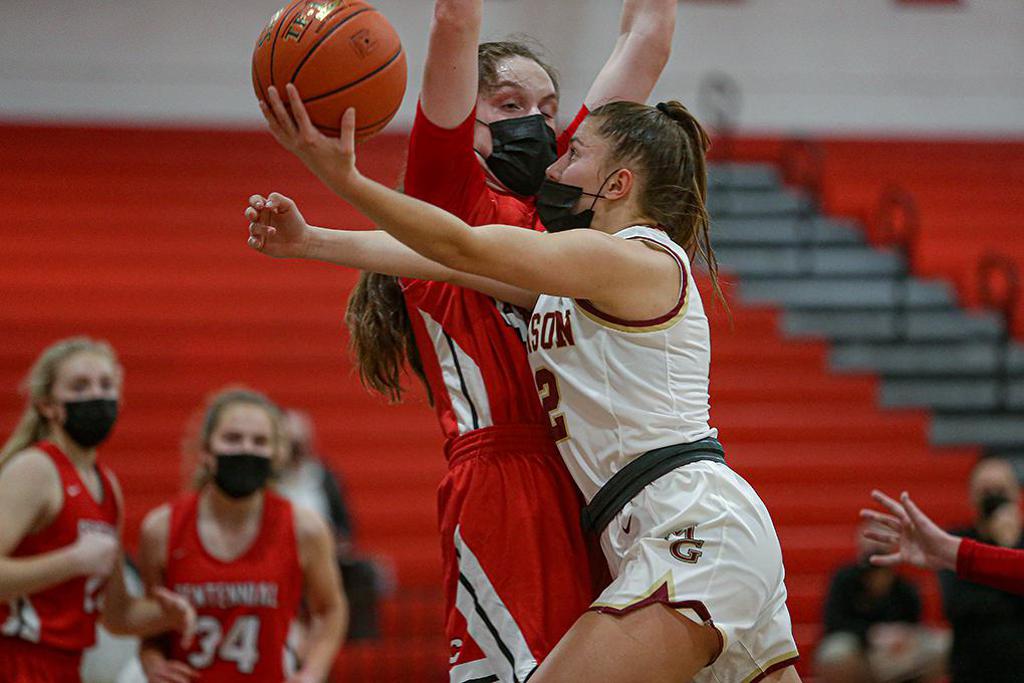 Maple Grove senior Kylie Baranick (12) took the ball to the basket against Centennial's Jenna Guyer in the first half. Baranick led the Crimson with 14 points. Photo by Mark Hvidsten, SportsEngine