In addition to Francesca Vascellaro's performance, the Stars got big outings from Kassandra Caron, Grace Massaquoi and Jenna Buer, who had 21, 19 and 16 points, respectively. 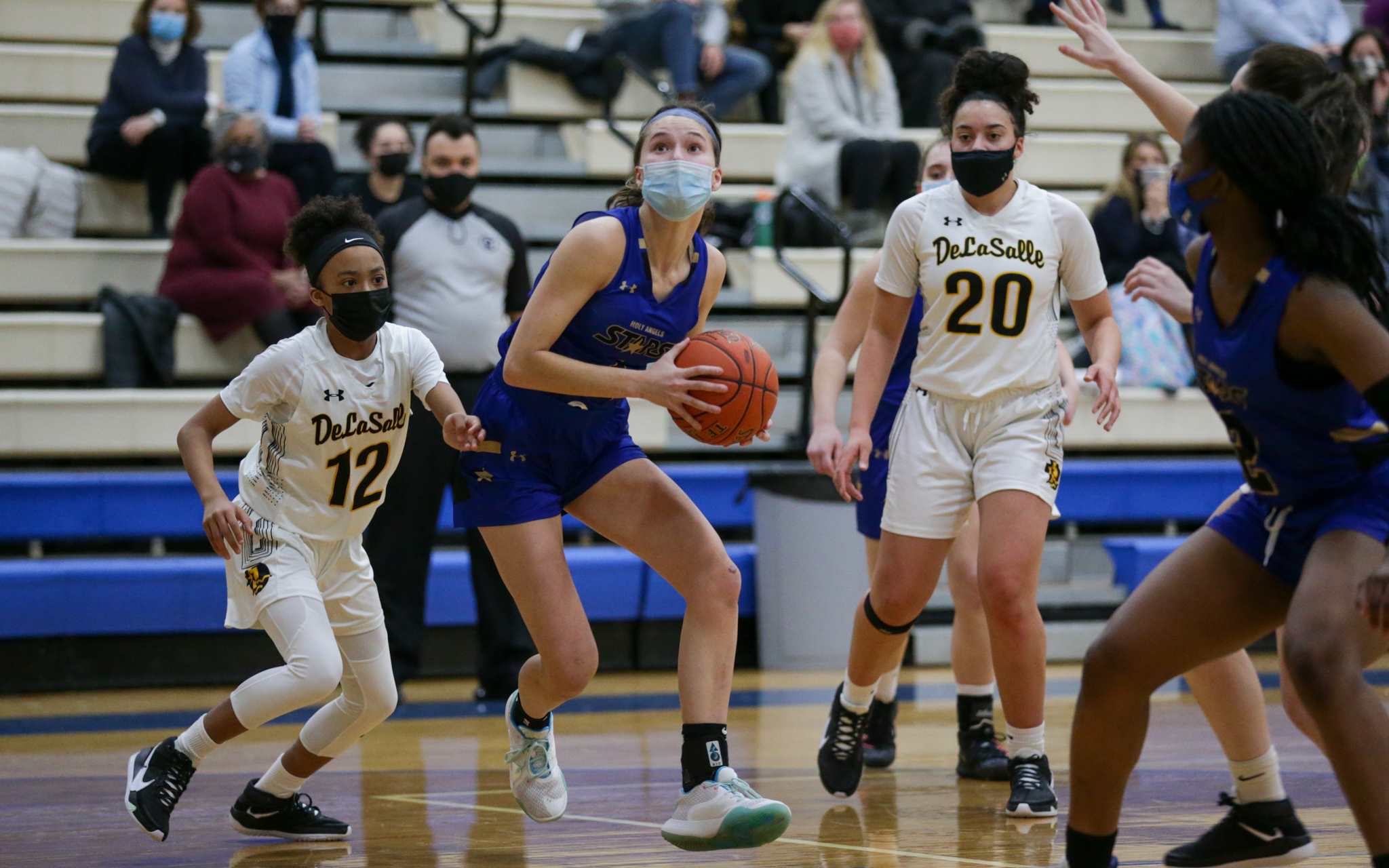 Holy Angels' Francesca Vascellaro (1) drives toward the basket during the first half of Friday night’s game against DeLaSalle. Vascellaro had a game-high 24 points in the Stars’ 96-69 victory over the Islanders. Photo by Jeff Lawler, SportsEngine

Holy Angels actually missed the first three-point attempts it put up to start the game and begin the second half Friday. Other than that, the Stars aligned and used multiple long-range shots to build a lead and dominate Tri-Metro Conference rival DeLaSalle.

The Stars, ranked No. 2 in Class 3A by Minnesota Basketball News, dominated and beat the No. 8-3A Islanders 96-69 at Academy of Holy Angels in Richfield. It was the third time this season that Holy Angels (9-1) scored 90-plus points in a game, the first since scoring 99 points against Columbia Heights in the second game of the season.

The three-point shot has been a part of the Holy Angels game plan all season, according to coach Dan Woods.

“This year, we’re fortunate enough to have good shooters,” Woods said. “So we’ve been trying to take advantage of it.”

Holy Angels scored nine of its 11 three-pointers in the first half to help jump out to a lead and distance itself early from the opponent. The first trio of treys came from freshman Jenna Buer, who hit four of them total from the corners.

“Tonight there was just something different,” said senior Frankie Vascellaro on the team’s three-point shooting. “And Jenna coming right away and hitting all those threes, I think really helped everyone else on the team, too.”

Buer said how determined she felt and really got into her mindset to shoot the ball.

Buer scored all of her season-high 16 points — doubling her previous season-high mark — in the first half. She came into the game averaging 3.4 points per game with 31 total points in nine games. She was happy to contribute in such a big way Friday.

With the deep lineup, it can be a matter of getting Buer rotated in with the varsity squad, according to Woods.

“But she can play. As you can see,” Woods said.

Junior Kassandra Caron was the other big contributor from beyond the arc for the Stars. She sank five total three-pointers, with three in the first half and the only two threes for her team in the second half. She reached the 20-point mark for the third time this season with her 21 total points.

The game started out tight, aggressive on defense and close on the scoreboard in the first few minutes. DeLaSalle got off to a good start with a seven-point lead at 15-8. But it was all according to plan for the Stars, whose goal is to control the tempo of the game with their depth.

Vascellaro drove to the hoop for a bucket with 11:27 left in the first half. Then, junior Grace Massaquoi quickly recorded a steal and a basket only 10 seconds later for a three-point game, causing DeLaSalle to call a timeout.

It wasn’t long after that when Buer found her hot streak on the floor. She hit her first three-pointer from the corner closet to the stands to tie the game at 17 apiece. Tied again a couple of buckets later, Buer hit the same shot for the 22-19 lead that Holy Angels wouldn’t relinquish. Then another from the opposite corner for a six-point lead, plus she made a pair of free throws.

DeLaSalle got within two points before the Stars rattled off a 15-0 run. Part of that was another corner three-pointer from Buer and one from Caron. Vascellaro also hit a long-range shot with just under four minutes to play in the first half for a 44-27 Stars lead that got the crowd of fans to their feet as DeLaSalle called timeout.

Back-to-back threes from Caron increased the lead even more, giving the Stars a comfortable 21-point lead at the half. They kept the pressure on in the second half and didn’t let up. Holy Angels led by as much as 32 points.

With such an intense rivalry game against a ranked foe in DeLaSalle, a squad which was one game away from a state title last year, Vascellaro was surprised at the results of Friday’s matchup against a team that’s always been a good opponent, she said.

“To be able to go out there and to beat them almost by 30 and to get on those runs, it was amazing,” Vascellaro said. “I don’t think we’ve ever done that against their team before.”

The big lead allowed Holy Angels to sub in some other players as well, and the depth continued to show for the Stars. Eleven players got on the scoresheet for Holy Angels, proving once again that it’s not simply one or two players that can score points.

Besides Buer, a couple of Stars reached season-highs in their point totals, including Vascellaro, who led all scorers Friday with 24 points. She started the second half strong, scoring eight of her team’s first 10 points after the break.

Massaquoi tied her season-high total of 19 points, finding the scoring touch in the lane and underneath the basket throughout the night.

DeLaSalle junior guard I’Tianna Salaam led the Islanders with 20 points, while junior guard Sydney Runsewe scored 16. Savannah White, another junior guard, put up 13 points, though she missed most of the first half after leaving the court with an apparent injury. She returned with a couple of minutes left in the half.

The loss snapped a six-game winning streak for DeLaSalle (7-3). Two of its three losses this season have come against Holy Angels, which defeated the Islanders 64-52 on Jan. 26. 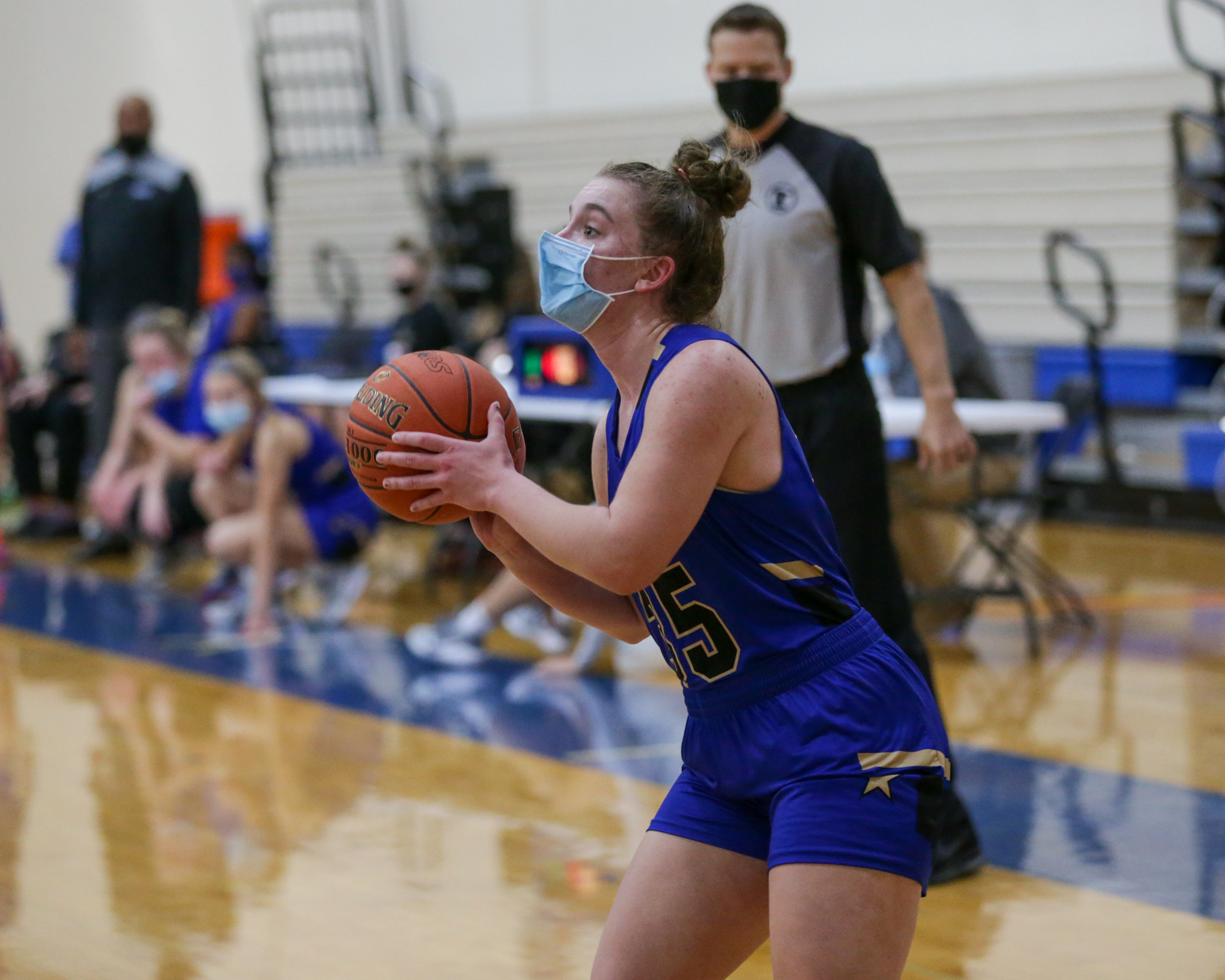 Holy Angels' Jenna Buer (35) spots up for a three-point attempt against DeLaSalle Friday night. Buer had 16 points in the Stars’ 96-69 victory over the Islanders in Richfield. Photo by Jeff Lawler, SportsEngine

Holy Angels got right back on the winning track with the Stars defeating Tri-Metro Conference rival DeLaSalle 96-69 on Friday at Academy of Holy Angels in Richfield.

Holy Angels, ranked No. 2 in Class 3A by Minnesota Basketball News, used the three-point shot to build a 55-34 halftime lead, led by four three-pointers and 16 points in the first half by freshman Jenna Buer.

Holy Angels got back in the win column after seeing its eight-game winning streak to start the season snapped by Class 4A squad Eden Prairie on Tuesday. 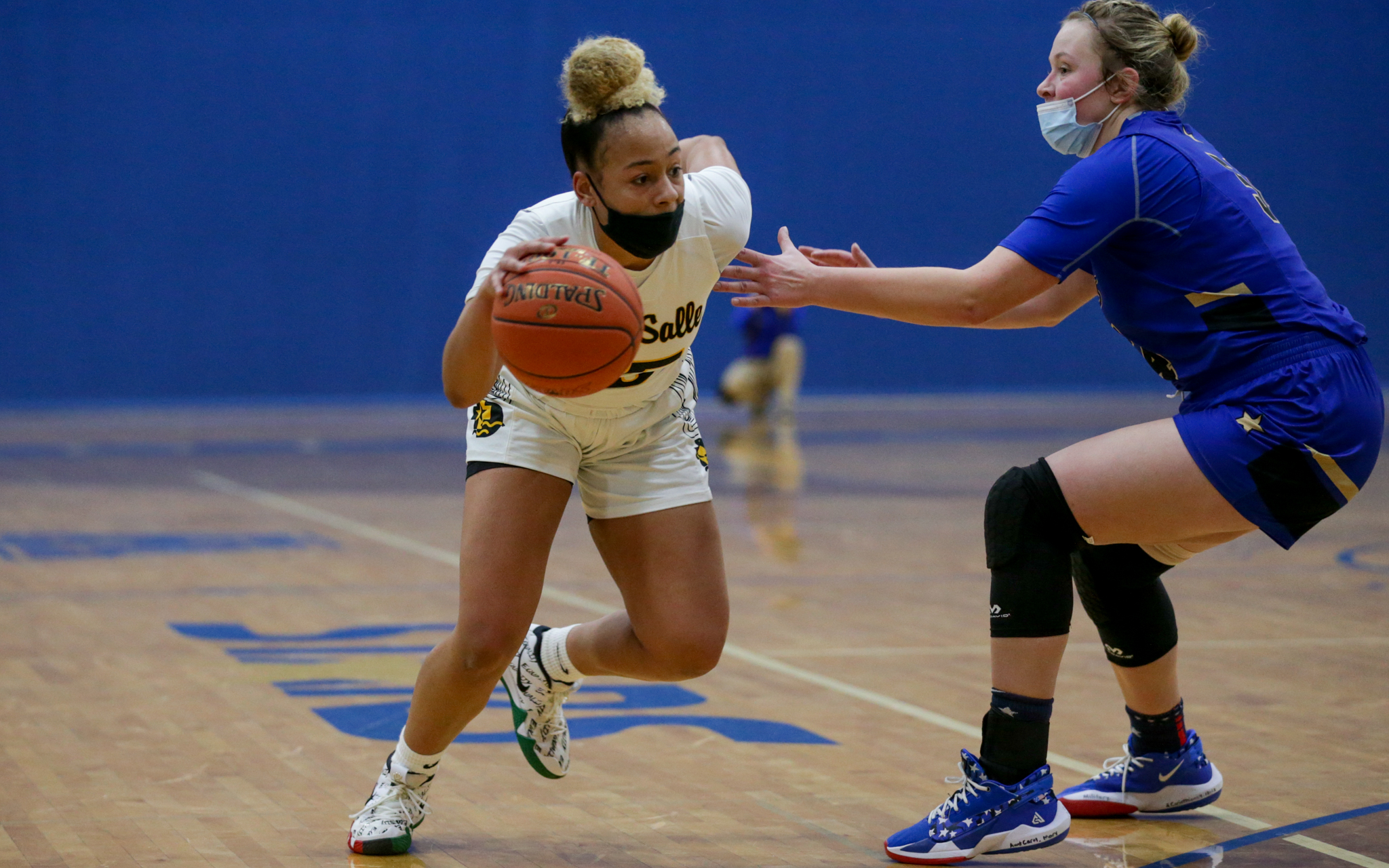