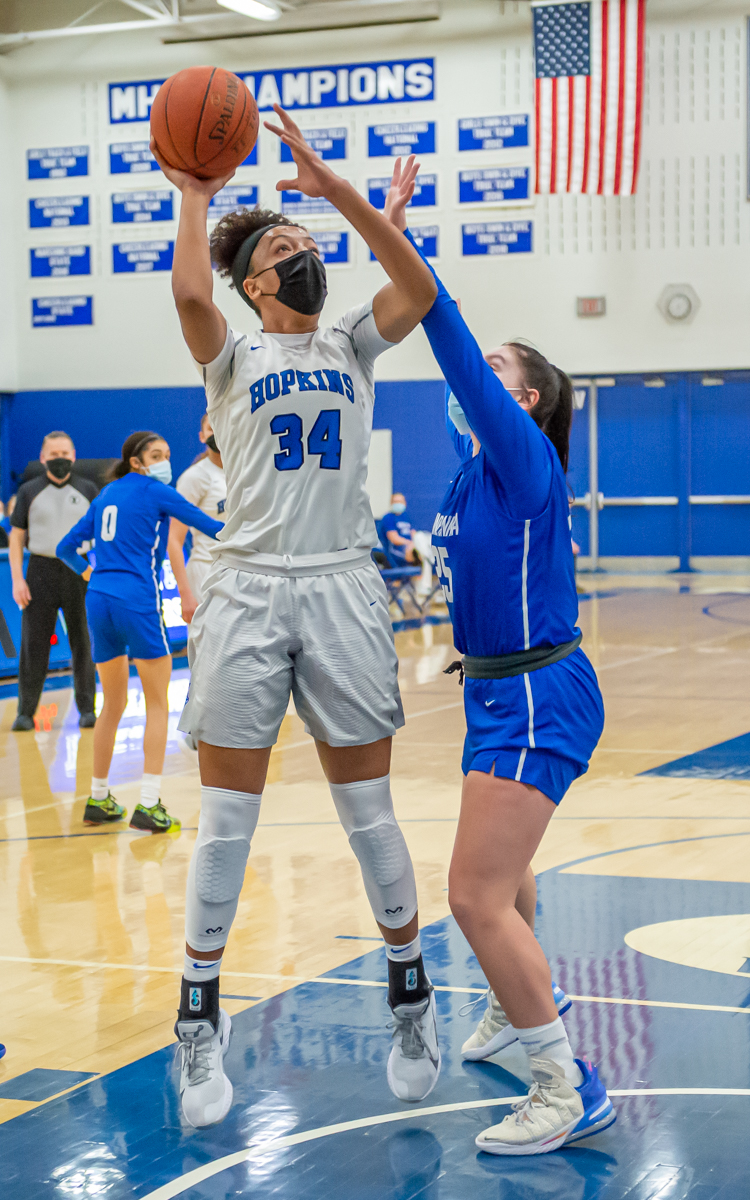 The Royals’ Maya Nnaji goes for a layup Thursday night during Hopkins' 82-53 victory over Lake Conference foe Minnetonka to remain undefeated. Nnaji had 20 points in the game. Photo by Earl J. Ebensteiner, SportsEngine

If there’s any doubt, Maya Nnaji would like to squash it.

After Nnaji and her Hopkins teammates went toe-to-toe with Minnetonka in a one-point win on Jan. 26, she put her foot down to help the Royals separate in the second half Thursday for an 82-53 road victory in the Lake Conference rematch.

Along with the tight defeat of Minnetonka three weeks ago, Hopkins, ranked No. 1 in Class 4A by Minnesota Basketball News, was also tested in a 70-65 win on Feb. 9 at Eden Prairie.

“This whole week we were hungry,” Nnaji said. “We know people are starting to doubt us, starting to think they can beat us. So it reignited a new fire within us, a new passion. We were playing way harder. We wanted to execute and make sure the refs didn’t dictate the game.” 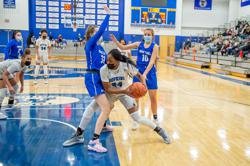 Minnetonka (8-4) has been on a quest of its own, looking to get back to the state tournament for the first time since beating Hopkins in the 2016 Class 4A state title game. Winning that title also represents the last time the Skippers beat their Lake rival.

The No. 10-4A Skippers possess a senior-laden lineup compared to the Royals’ predominant six-player rotation of juniors and younger.

The experience paid off in the early going for Minnetonka on Thursday as it was able to break Hopkins’ swarming defensive pressure and go basket-to-basket with Hopkins.

The Skippers were clogging the paint and sacrificing their bodies to take charges against an opponent dead set to take it to the rim. Hopkins made just three three-pointers and rarely settled for the outside shot.

The lead changed hands in the opening 10 minutes. Sensing Hopkins (10-0) was beginning to find a rhythm, Minnetonka coach Leah Dasovich called a timeout with the Skippers up 14-13 with 8 minutes, 56 seconds until halftime.

The break in the action wound up fueling Hopkins. The Royals leaned on Amaya Battle and Taylor Woodson to do most of the damage on an 11-0 run that was key to Hopkins taking a 40-26 halftime lead. The duo combined for 23 first-half points.

“I thought Taylor was the straw that broke the camel’s back early in the game with the multiple and-ones and steals,” said Tara Starks, Hopkins’ first-year coach. “Then we wanted to come back the second half and get Maya involved, make sure she got touches.”

Nnaji, one of the top-ranked forwards in the class of 2022, was held to three first-half points. She was squaring off against Minnetonka’s heralded senior post Sophie Haydon, a George Washington commit.

“First half I was driving too much and I knew they were going to try to take a charge, because they knew I was going to be aggressive,” Nnaji said. “Second half, I just wanted to come out more poised, do the work early, get a good position inside the post and go from there.”

There was no comeback this time.

Nnaji, younger sister to Denver Nuggets 2020 first-round pick Zeke Nnaji, finished with 20 points with most of that production coming in the opening minutes of the second half. Her steely-eyed focus sparked a 10-2 opening run that quickly pushed the lead north of 20 where it stayed.

Woodson led all scorers with 21 points to go with 20 points for Battle.

“We’re a really versatile team. Everyone has an outside jumper and everyone can attack,” Nnaji said. “We’re really strong finishing and quick. We want to use our advantages. It’s really easy for us to outmuscle people, out-athlete people and get to the basket. If that’s where the advantage is, that’s where we’re going to go.”

Hopkins has played all conference games so far this winter but will soon test itself elsewhere. Thursday was the first of five-straight road games for the team. Stops coming up include matchups with No. 3-4A Chaska on March 4 and No. 1-3A Becker just two days later.

A chance to reach victory No. 78 in a row could come at home in a rematch against Becker in a March 12 regular-season finale.

Starks’ squad will prepare for the closing gauntlet in due time. Just not on Friday.

“We’ve got a tough schedule,” Starks said. “We’re focused on one game at a time and I’m really proud of the kids.

“I thought they played hard, so I gave them the day off.” 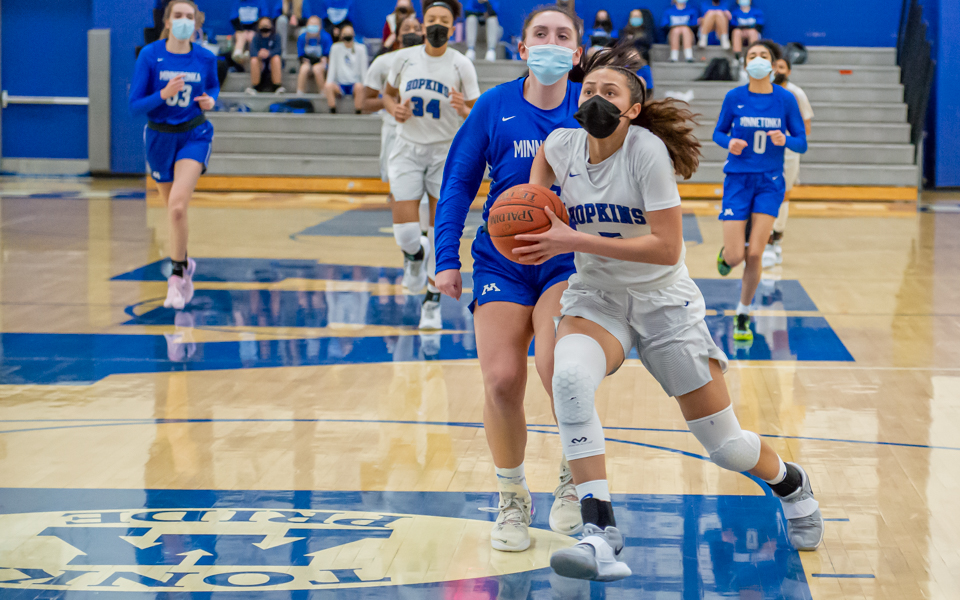 Hopkins' Amaya Battle, who had 20 points Thursday, drives to the basket in Minnetonka during the Royals' 82-53 defeat of the Skippers. Photo by Earl J. Ebensteiner SportsEngine

A back-and-forth game in the early going gave way to Hopkins dominating the last 20-plus minutes en route to an 82-53 win over Lake Conference rival Minnetonka at Minnetonka High School.

The Royals, ranked No. 1 in the Class 4A by Minnesota Basketball News, extended their nearly three-year win streak to 72 games. The closest result in that streak, which approaches Fosston’s state record of 78 straight wins, was a 63-62 Hopkins defeat of Minnetonka back on Jan. 26 in Hopkins.

Both Lake teams settled into playing at a brisk pace to open the game. The No. 10-4A Skippers called a timeout with 8 minutes, 56 seconds left in the half and were up 14-13.

Hopkins, however, began to assert itself in the paint and soon retook the lead for good, helping the Royals (10-0) to a 40-26 lead at halftime.

Hopkins continued to push ahead in the second half with a 10-2 run, feeding the ball to one of the nation’s top post recruits, junior forward Maya Nnaji. She had 17 of her 20 points in the game's final 18 minutes.

Sophomore forward Taylor Woodson put in a game-high 21 points for Hopkins. The Royals did much of their work in the paint and got a third 20-point scorer Thursday in junior guard Amaya Battle, who got most of her 20 points on dribble penetration.

Desiree Ware, a junior guard for the Skippers, had a team-best 13 points. Junior guard Ki’ani Lockett, a transfer from DeLaSalle, had 11 points and senior forward Molly Oehme added 10 points for Minnetonka (8-4).

Hopkins extended its conference winning streak to 35 games, which includes 11 triumphs in a row against Minnetonka. The Skippers last defeated the Royals in the 2016 Class 4A state championship. 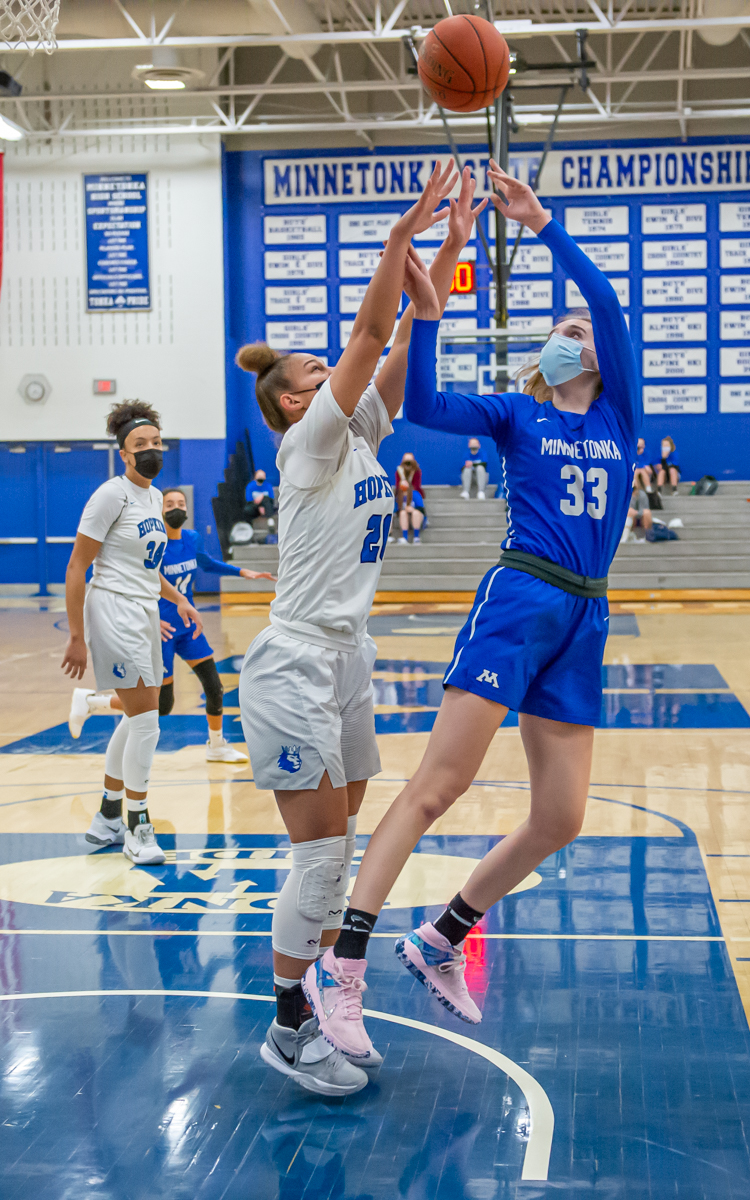 Minnetonka senior Sophie Haydon (33) goes for a basket during the first half of Thursday's Lake Conference home game against Hopkins, the top-ranked team in Class 4A. Photo by Earl J. Ebensteiner, SportsEngine