The Buccaneers made some key free throws along with important defensive stops to take the lead over the Crusaders late in the game and finish with a win. 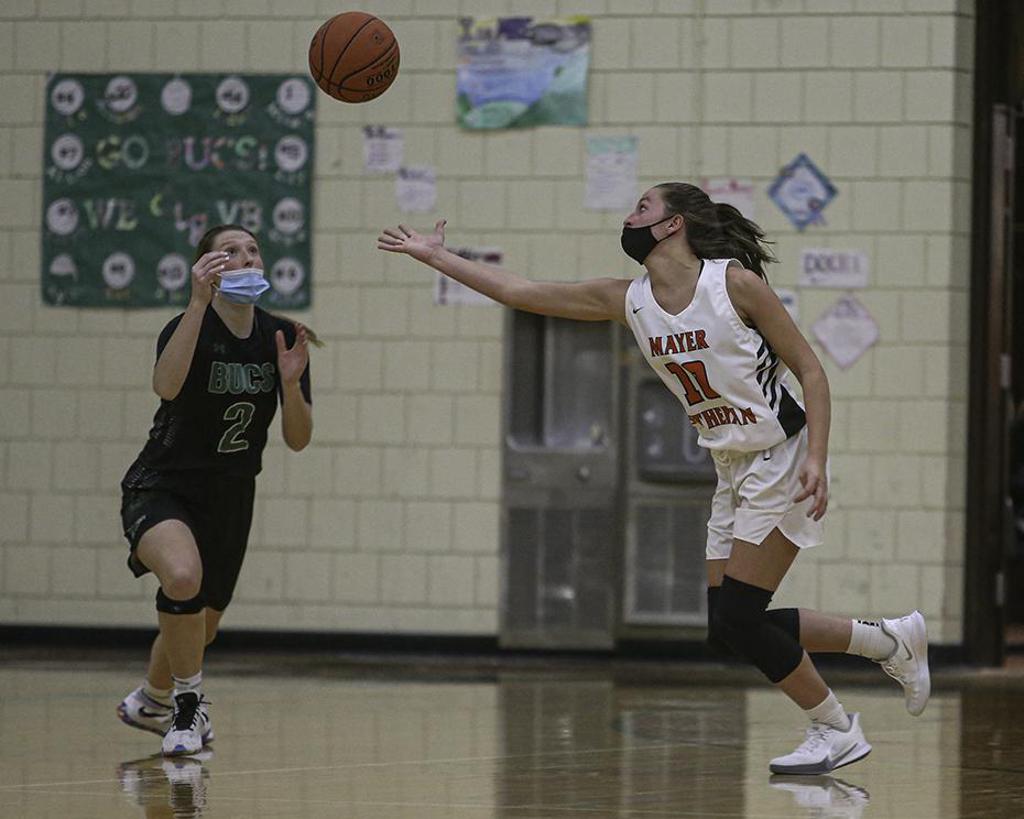 Senior night ceremonies might take the entire night when the time comes for Waterville-Elysian-Morristown.

A whopping 11 Buccaneers are donning the black and green for the final time this season. Every guard and wing returned from a group that reached the state tournament for the first time in school history a year ago.

When Waterville-Elysian-Morristown faced a double-digit deficit in the second half, the experienced Buccaneers didn’t crumble. They came back late in the game to beat Mayer Lutheran 59-55 on Tuesday night in Waterville, Minnesota.

“We needed to find something to stem the tide a little bit. Their length was giving us some trouble. They’ve got some big, long, athletic girls,” said Waterville-Elysian-Morristown head coach Ty Kaus. “I didn’t like our energy in the first half. Once we brought our energy up we were able to get some turnovers, get some momentum going then we were rolling from there.” 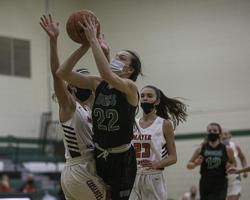 The Crusaders (1-1) held the Buccaneers (1-1) scoreless for the opening 3 minutes, 37 seconds. They used a size advantage led by 6-foot-2 post, junior Lilly Wachholz, to cut off opportunities against Waterville-Elysian-Morristown’s offense. Mayer Lutheran opened the game on a 10-3 run and held a strong shooting team without a three-point make in the first half.

Waterville-Elysian-Morristown, No. 4 in the Minnesota Basketball News’ Class A preseason ranking, had a goal to keep No. 6 Mayer Lutheran from even getting a shot off in the first place. Nearing the midway point of the second half and with the deficit hovering near double digits, Kaus dialed up full court pressure.

The Crusaders were sped up to the pace the guard-oriented Bucs desired.

Senior forward Toryn Richards finished with a game-high 17 points with 10 in the second half. Her and her classmates endured some losing seasons as youngsters. Now they’re reaping the benefits of hundreds of games played together.

“I think there’s definitely a different vibe this year,” Richards said. “I think we’re more calm in sticky situations than we were last year at this time.”

The Bucs pulled within a possession for the first time since the game’s opening minutes at 38-35 with under 9 minutes to play. Joining Richards in leading the charge was senior guard Brielle Bartelt.

Bartelt was held in check in Waterville-Elysian-Morristown’s season opening loss at Lake Crystal-Wellcome Memorial and had two points at the break Tuesday. She broke out for 11 of her 13 points in the second half en route to the comeback.

Trailing 53-50 with three minutes to go, Waterville-Elysian-Morristown closed on a 9-0 run before Mayer Lutheran added a basket before time expired. A pair of free throws by senior forward Kylie Pittmann gave the Bucs their first lead to go up 54-53 with 2:05 on the clock.

The Bucs walled up to keep the Crusaders out of the paint in the closing minutes and forced tough jump shots that didn’t fall.

Wachholz had eight points at halftime but was limited to two in the second half. Mayer Lutheran has one of the larger front courts in the class and will look to capitalize more on that advantage as the season wears on.

“The whole game, we need to look at mismatches,” said Mayer Lutheran guard Emma Lade. “I feel like we didn’t do that enough.”

Lade led her team with 16 points and was effective gashing the Bucs’ defense. If the state tournament is played in full this time in 2021, Lade and the Crusaders wouldn’t mind a rematch.

“I feel like it was a really good second game to start the season,” Lade said of the non-conference, non-sectional matchup. “It was a tough opponent. We lost, but I feel like if we played again we’d win since it was only a (four-point game). If we just hustle some more and rebound better I think we can definitely win.” 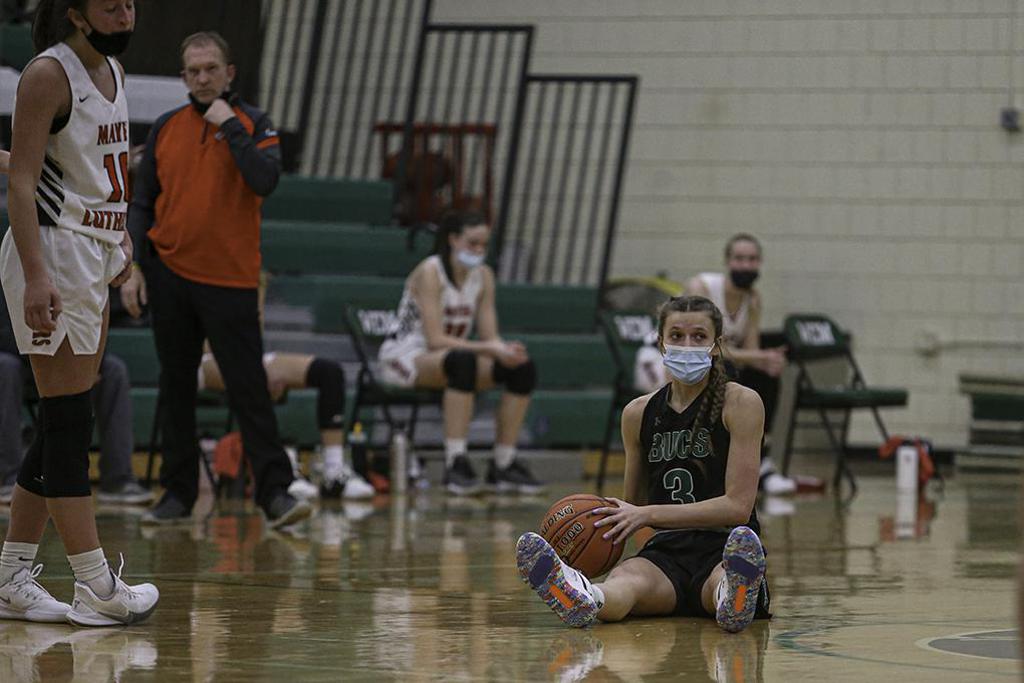 Waterville-Elysian-Morristown's Toryn Richards (3) looks to an official for the call after she was fouled in the final two minutes. She made two free throws to give W-E-M its first lead of the game. Photo by Mark Hvidsten, SportsEngine

Waterville-Elysian-Morristown erased a double-digit second-half deficit to down Mayer Lutheran in a match of top-10 teams.

The host Buccaneers grabbed their first lead with under three minutes left in the game and held on for a 59-55 win Tuesday night in Waterville.

Mayer Lutheran (1-1), ranked No. 6 in the Minnesota Basketball News' Class A ranking, used its size to engulf No. 4 Waterville-Elysian-Morristown early on. The Crusaders held the Bucs scoreless for the first three minutes and opened up a 32-23 halftime advantage.

Waterville-Elysian-Morristown (1-1) bounced back from a season-opening loss to Lake Crystal-Wellcome Memorial by ramping up the defensive pressure full court.

Mayer Lutheran led by as much as 11 before Waterville-Elysian-Morristown slowly clawed back. 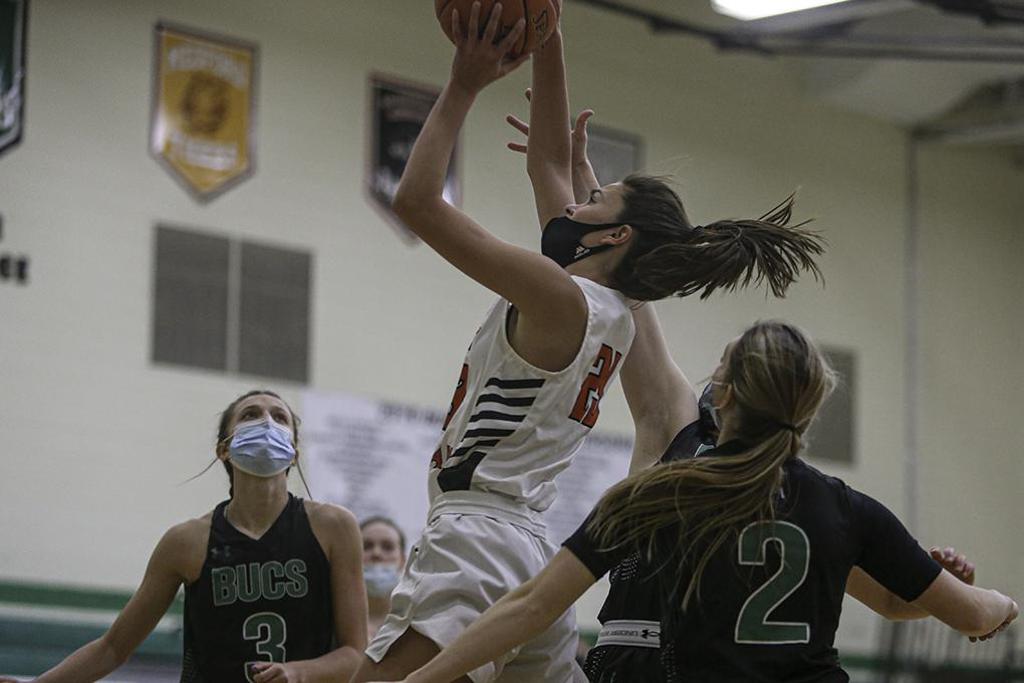 Mayer Lutheran sophomore Madeline Guetzkow took the ball to the basket for a first-half score. Photo by Mark Hvidsten, SportsEngine