With hockey, basketball set to resume, masks are taking a bit to get used to

They're not required during wrestling competitions. But athletes and coaches, grateful to be playing, are finding ways to cope with a new reality. 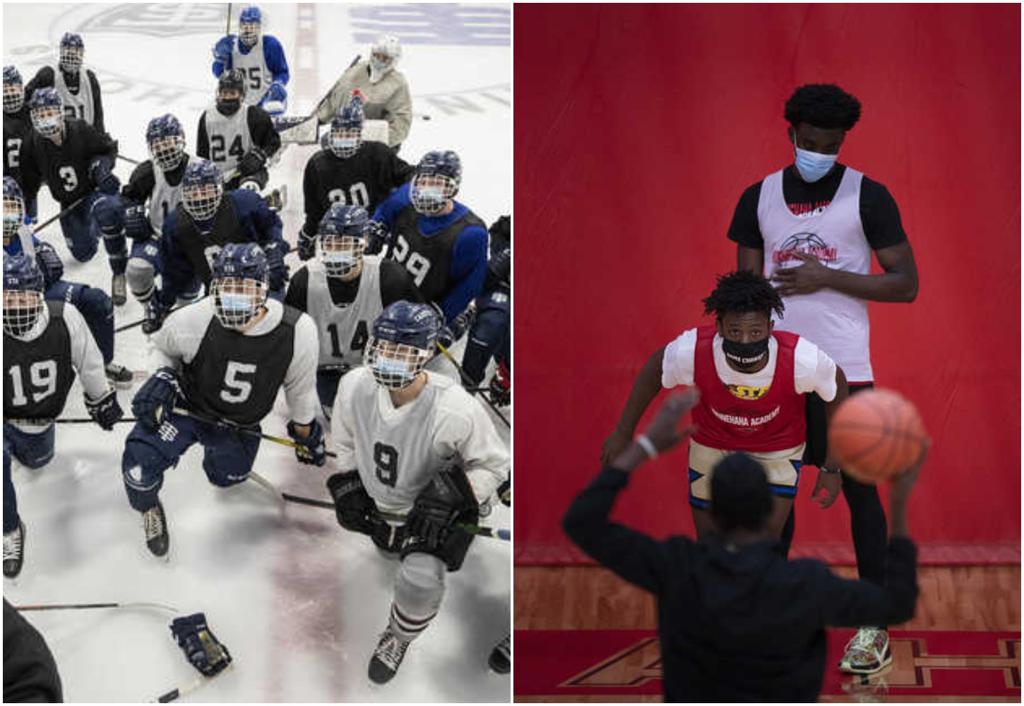 COVID-19 stole the beginning of the high school basketball and hockey seasons. And when practices finally began this week, every player and every coach had a constant reminder, right on their face, that the coronavirus is still a major factor.

The Minnesota State High School League is mandating face coverings for high school basketball and hockey players, in accordance with state health department guidelines. The measure has generated considerable social media buzz, and a lawsuit was filed Friday seeking to repeal the mandate.

Teams across the metro are and state are clearly in adjustment mode, with some players reporting shortness of breath, fatigue and headaches. But many tempered their complaints, noting how grateful they were just to be playing again. 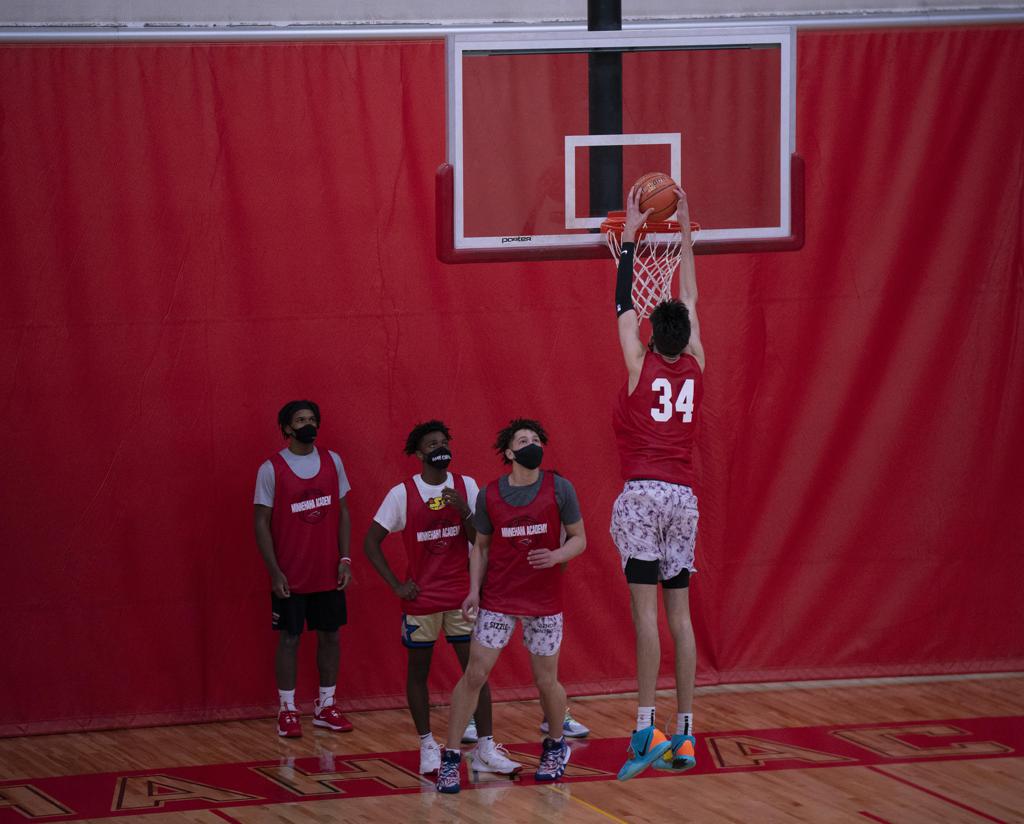 Chet Holmgren of Minnehaha Academy dunked during a drill at practice Tuesday at the school in Minneapolis. Masks are required during practice and games for Minnesota high school and youth sports this season. Photo: Jeff Wheeler, jeff.wheeler@startribune.c

Chaska junior Mallory Heyer thought she was in good physical condition, until she stepped on the basketball court wearing a mask.

“I know there are a lot of different perspectives on masks, but for me the mask made it pretty challenging to breathe normally and play at my full potential,” said Heyer, a Gophers recruit. “Basketball is a sport where we run a lot, so it’s a lot more difficult to wear a mask in front of your face and breathe into a cloth.”

The Minnesota Department of Health has required mask usage by all participants during practices and games for a few winter sports, including basketball, since practice got underway Monday.

“We’re grateful to be playing basketball,” Chaska girls’ coach Tara Seifert said. “There is a sense of normalcy when things have been so different.”

Heyer also plays volleyball, which went on last fall without a mask mandate. Her basketball team needed to adjust. 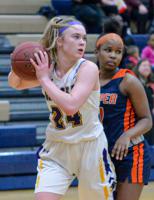 “A few of my teammates had headaches after we were done practicing,” Heyer said. “Obviously, we can’t control that, we have to wear them, but everybody is saying how challenging it is. I talked to some players at other schools and they are saying the same thing.”

Seifert also heard some concerns from parents with daughters who have asthma.

“We are aware of the kids who use inhalers,” Seifert said. “We have told our players if they don’t feel well to get off the court. That is an area we have not gotten a lot of direction from the Minnesota State High School League.”

Seifert has worked in plenty of water breaks for her squad.

“The most challenging part is the cardio,” she said. “At the end of practice, there was a lot of fatigue and kids were feeling extremely hot. Dehydration came into play.”

Minnehaha junior forward Prince Aligbe voiced a concern with the disposable mask he has been wearing. He plans on trying different masks during practice, and could wind up with a performance mask.

“Wearing a mask doesn’t bother me,” said Aligbe, a Division I recruit who has an offer from the Gophers. “It’s when you start sweating. The mask sticks to your face, making it hard to breathe. It starts to get caught up in your nose and mouth.”

Aligbe’s current solution: Rotate the mask two or three times during practice. He is bound not to let it be detrimental to his season.

“The endurance isn’t a factor for me,” Aligbe said. “It makes me have to get in better shape, and that’s what I want. I’m still going to play to the best of my ability.” 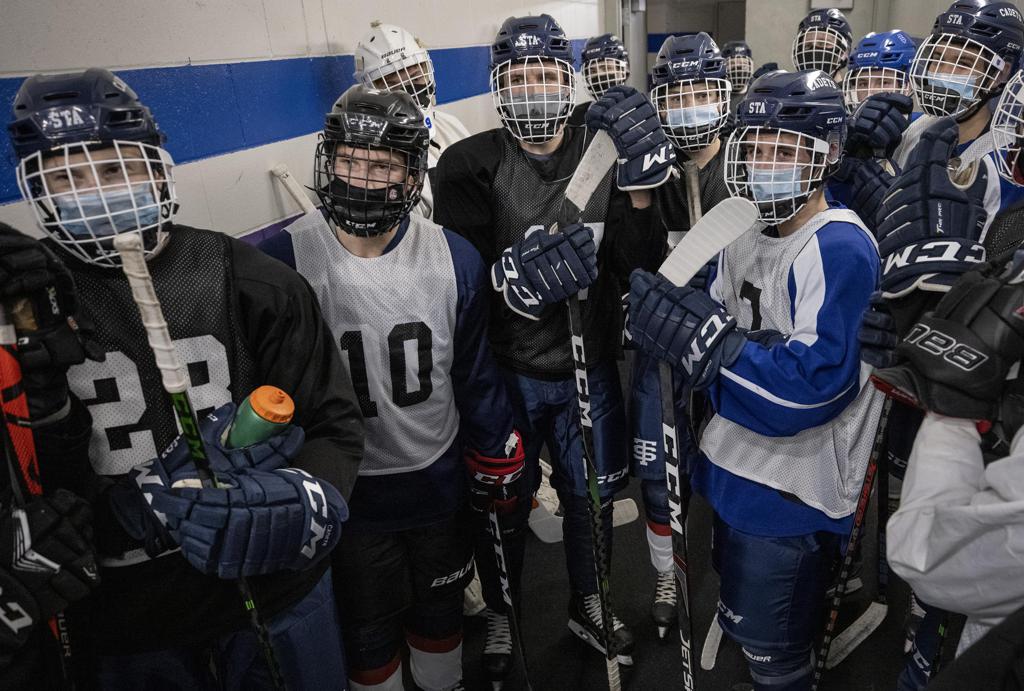 Hockey shakes off new 'bizarre' era but not without some modifications

Last season marked boys’ hockey coach Trent Eigner’s first at St. Thomas Academy after eight seasons at Lakeville North. A global pandemic is forcing him to almost start over once again this season.

“My role has changed to COVID protocol coordinator,” Eigner said. “That’s what the goal of playing hockey necessitates.”

Chairs set up six feet apart along the hallways outside the locker rooms at the team’s Mendota Heights rink. Individual player water bottles. The 65 varsity hopefuls splitting into different sessions and donning face coverings while on the ice.

Efforts to mitigate potential coronavirus spread were everywhere during tryouts that began when practices resumed Monday.

About 17 miles north at Aldrich Arena, home of defending Class 2A state champion Hill-Murray, senior defenseman Joe Palodichuk wore a face covering as he entered the rink and surveyed teammates scattered about the venue’s fan benches, strapping on pads.

Palodichuk shrugged off what he called “a pretty bizarre” scene. Wearing a face covering during practice “was the toughest part,” he said. “But I’m just glad to be playing.”

For Pioneers coach Bill Lechner, concerns about his players wearing a target on their backs as defending champs are second to the concerns about the required coverings on their faces this season.

Hockey equipment manufacturers CCM and Bauer offer products designed to enhance breathability. The mandate makes Lechner “feel bad for the kids,’’ he said. “But it’s our world right now. We want the chance to have a season. And our kids didn’t cheat or complain.”

“I told them, ‘If you’re feeling any issues, come see me. I’m not going to cut you for it,’ ” Lechner said. “No one said anything. But I did back off a little bit.”

“We wanted to get the feel of an in-season pace; we wanted to get a baseline for how masks would impact the players,” he said. “Is it tough for them to see the puck when it’s in their skates? Do they feel more fatigued? We wanted to ramp-up the learning curve. Because in about a week, we have to play hockey.”

Wrestling among few sports exempt from mask use during competition

While high school basketball and hockey players are adjusting to competing while wearing a mask, some sports were given a pass on the mask-mandate. Wrestlers, gymnasts and swimmers will not be required to wear a mask during competition, with the Minnesota Department of Health citing potential health hazards such as choking or obscured vision.

In all three sports, athletes will still be required to wear a mask when not competing, however.

With wrestling, many casual observers view the sport’s close physical contact as a reason to mandate masks.

“If you’re not in the wrestling world, you look at our sport and say ‘Wow, that’s a lot of physical contact,’ ” said Wayzata coach Eric Swensen, incoming president of the Minnesota Wrestling Coaches Association. “But some of our matches are barely a minute long. And wrestlers are isolated and not yelling or shouting during a match. That’s something that’s taught when they’re little: Mouths closed.”

Swensen said before the season, an advisory committee created an 11-page document outlining safety guidelines. It used the experiences of club wrestling, which held summer meets, as a template.

“Basically, if you weren’t on a mat, you had a mask on,” Swensen said. “It worked. I was at an event in Kansas City in the middle of the summer and some news people came out. They wanted to call it a super-spreader event, but it wasn’t. There was no fallout. We used the same approach in what we sent to the [MSHSL]. And when they presented updated recommendations, wrestling was an exception.”

Stillwater coach Tim Hartung said he experienced firsthand how a mask can become a hazard while demonstrating techniques to his wrestlers.

“It was extremely difficult to keep one on,” he said. “It gets pulled down and moved around. It could hinder breathing when you’re exerting yourself extremely hard in a match.”

He added that if a mask isn’t secured properly, it’s unlikely it would provide the intended protection. “I’m not sure how effective they would be if you can’t keep them on,” he said.

For now, wrestling coaches say athletes are still adapting to wearing a mask during training and conditioning, but the excitement of the return of the wrestling season had overshadowed any doubts about them.

“The kids were struggling with having to put a mask on when they’re conditioning when we were just cranking on each other without them, but we’re all just happy to be together again after social distancing and distance learning,” Cambridge-Isanti coach Neil Jennissen said. “I wouldn’t say they’re getting used to it, but they know what to expect. We’re going to do everything we can to follow the rules.”