After thrill of back-to-back wins, Henning basketball gets a double dose of heartbreak

Neither of Henning’s basketball teams got the chance to win a state title. 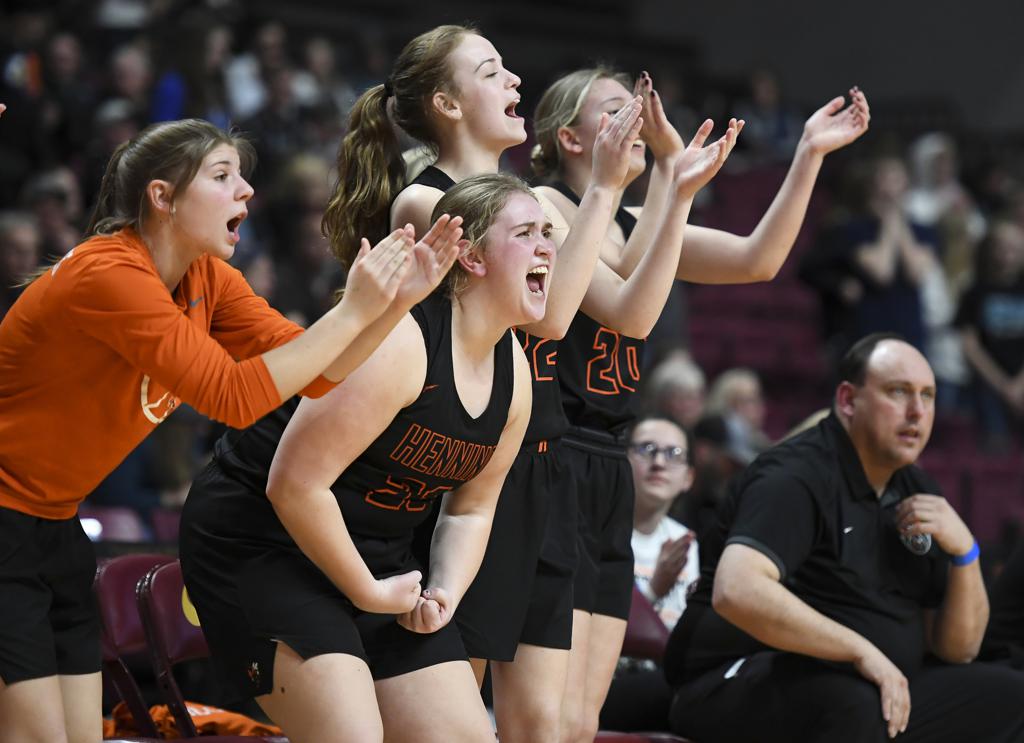 The Henning bench erupted after a basket scored against Fillmore Central in the second half. ] Aaron Lavinsky &#x2022; aaron.lavinsky@startribune.com Henning played Fillmore Central in a Class 1A state tournament quarterfinal game on Thursday, March

For a few hours Thursday evening, Henning High School basketball was as good as it could get in Minnesota.

The fourth-ranked girls’ team won its first Class 1A state tournament game, a 69-56 victory over Fillmore Central, at Maturi Pavilion on the University of Minnesota campus. It was the program’s first trip to the state tournament.

A couple of hours later, the boys’ team was headed to state as well. Playing 237 miles away at Concordia College in Moorhead, the Hornets successfully defended their Section 6 championship with a 57-45 triumph over West Central Area. A year ago Henning won the Class 1A championship in its first state tournament appearance since 1966.

The community of 800 people was caught up in basketball excitement. Some members of the boys’ team headed immediately for the Twin Cities, intent on being there for the girls’ semifinal game Friday afternoon.

The game never happened. And the boys’ season ended, too, 14 hours later when the Minnesota State High School League canceled the rest of the winter sports state championships because of growing concerns over the COVID-19 pandemic.

“It was a crashing end to an unbelievable winter season in Henning,” said Mike Hepola, the girls’ team coach. “We’re 29-2, and don’t even have the best record in the school. It was a special season for us.”

The No. 2-ranked boys’ team improved to 29-1 with its section victory. It was cherishing the idea of successfully defending its state championship, won with the jersey of former teammate Jacob Quam, killed in a car accident, affixed to a chair on the team bench.

“Both teams had high hopes in the state tournament,” boys’ team coach Randy Misegades. “We told our players to play the section championship just like it was the state championship because we might not get another chance this year.

‘‘Unfortunately, we got that news Friday. It was a bizarre day.”

Of the 60 teams that saw their tournament hopes dashed by the cancellation, only Henning, Hopkins and DeLaSalle felt the sting twice, with teams in both tournaments.

After winning their game Thursday, members of the Henning girls’ team considered walking to Williams Arena to see Class 4A, No. 1-ranked Hopkins and Connecticut recruit Paige Bueckers play against Stillwater. Instead, it returned to the team hotel in Bloomington and gathered in the lobby to watch a livestream of the boys’ game.

“We were cheering as loud as if we were in the gym in Moorhead,” Hepola said.

The watch party included an additional assignment before Friday’s semifinal matchup with Cromwell-Wright: figuring out who among their supporters could attend the game. In response to the virus threat, the high school league restricted attendance to 90 school-approved spectators per team.

“Each family was going to get five tickets, and we would distribute the extras as needed if some families didn’t need that many,” Hepola said.

The Hornets had an “excellent” shoot-around Friday morning at the University of St. Thomas and had just boarded their bus at 10:45 a.m. to return to its hotel when Hepola got a call on his cellphone: ‘‘From a number I didn’t recognize. I was thinking, ‘Uh-oh.’ ”

The call was from the high school league. The rest of the tournament was canceled.

“I told our players that I had an announcement to make, and don’t know if I can do it without crying,” Hepola said. “There were a lot of tears being shed on our team bus.”

His squad was eager to play in Williams Arena and on television. About 170 miles away in Henning, a viewing party for the game was set up at the school for those who couldn’t get a ticket.

“We were really looking forward to it,” said Ellie Dague, Hornets junior guard and leading scorer. “It was really sad for our seniors because we didn’t know that we had played our last game together the day before. It was an unfortunate ending.”

The team returned to the hotel for a little reception before departing for Henning. The players were welcomed home with fans aligned along the town’s main street. Thumper Pond Resort in Ottertail provided 30 rooms for the two teams for the evening, to take in its water park and try to ease their sadness.

“Both teams were equally disappointed,” Hornets senior guard Blake Wallevand said. “We’ve both been through a lot of adversity together. We’ve been able to get through the tough times because we have good teammates.”

At noon on Saturday, Misegades gathered his squad for a team meeting. It was its first opportunity to get everybody together since their victory.

“There were a lot of tears,” Misegades said. “It was very emotional.”

Some of those emotions recalled Quam, who would have been a senior starter/captain on last year’s championship team.

“We put everything into perspective and talked about Jacob,” Misegades said. “We’ve been through a lot of rough stretches, but we were still able to sit here today and talk about it. Jacob didn’t even have that chance.

“There is no manual for the things we’ve been through. It’s a part of life that you have to deal with, and learn how to handle.”