Stillwater's coach feels the sting but deals with, Hopkins anticipates scrimmage-like atmosphere. Plus a rematch in 3A, tournament-tested veterans, and playing up to get better. 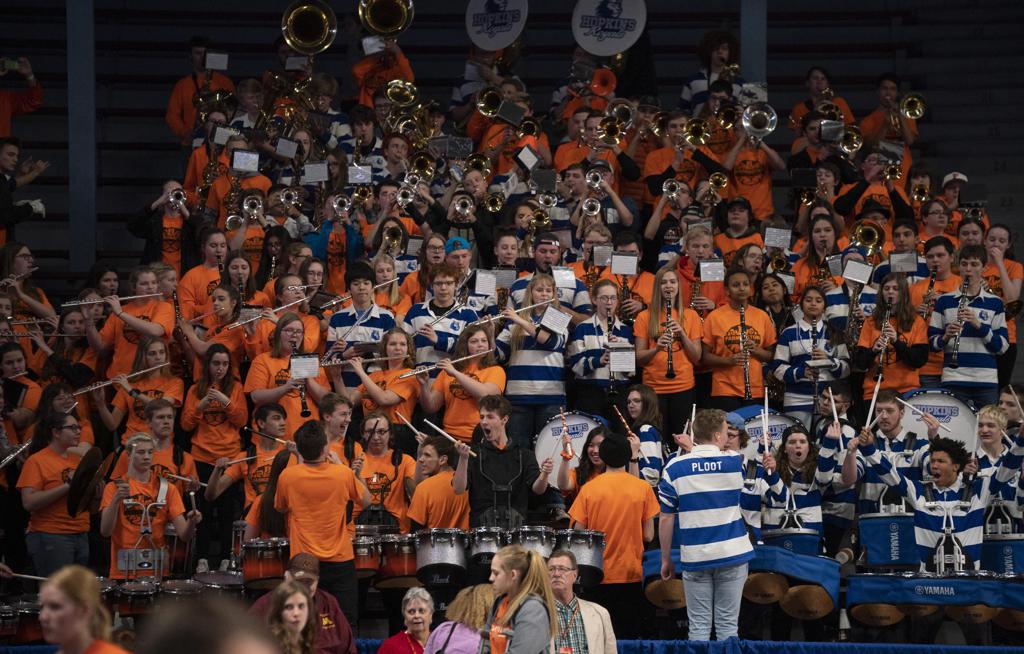 The combined Hopkins and Farmington bands played several tunes together at the end of the Hopkins-Stillwater game, one of the last of the tournament before crowd-size restrictions go into effect to counter concerns about the spread of the COVID-19 virus. Photo: Jeff Wheeler * jeff.wheeler@startrbune.com

The restrictions put in place Thursday by the Minnesota State High School League in response to the COVID-19 pandemic was a main topic of conversation at Williams Arena.

For Stillwater coach Willie Taylor, not getting the chance to play a third-place game to forget the taste of a lopsided loss to Hopkins was frustrating. The league canceled all non-championship round games.

“It’s eating me right now,” he said. “You don’t want it to end like that. But things happen in life and you just have to deal with it.”

The league limited each team to just 90 fans for games Friday and Saturday, adding a cavernous feeling to a storied venue known as the Barn.

“It’s going to feel like a glorified scrimmage, I think,” Hopkins coach Brian Cosgriff said. “You just don’t know how it’s going to be. I’m just grateful that we’re having it.”

All season, Becker had been eyeing a rematch with DeLaSalle in the Class 3A championship game.

“We’re having practices a month-and-a-half ago preparing for DeLaSalle,” Becker coach Dan Baird said. “I wanted them in the championship game. I wanted us to be facing them and our girls want that, too.”

With the game set for Saturday, Baird said his team wasn’t too worried about playing in front of a mostly empty Williams Arena. Attendance restrictions were announced Thursday in response to the COVID-19 outbreak.

““We don’t really care how many fans are there,’’ Baird said. “We’d like our fans to be able to go, but we respect the Minnesota Department of Health decision and everything that’s going on in the country right now. We’re just very glad to have the opportunity to play in that game.”

Just because Waterville-Elysian-Morristown (27-4) is playing in its first state tournament doesn’t mean it lacks big-game experience.

Eight of the Buccaneers’ 14 players were on the school’s volleyball team and 10 were on the softball squad, both of which went to the state tournament.

“It’s a pretty athletic group,” Buccaneers coach Tyler Kaus said. “We haven’t been here before, but these kids have played in big moments, big games and big arenas.”

They will face defending state champion Minneota (31-1) in the semifinals Friday. The Vikings defeated the Buccaneers 3-0 in the Class 1A volleyball state final.

“Nothing fazes them anymore,” Kaus said.

Last year, it appeared there was a chance that Waconia would be moving up from Class 3A to 4A.

“It was really close [enrollment-wise],’’ Waconia coach Dusty Neibauer said. “Thinking that we might move up, we scheduled a lot of 4A teams.”

Seven of the Wildcats’ first eight games this season were against 4A teams. Among them were 4A state tournament semifinalists Hopkins and St. Michael-Albertville. In all, the Wildcats (20-11) played 13 games against 4A teams, going 5-8 against them.