Hopkins moves within one win of back-to-back undefeated seasons

The defending Class 4A champions forced 15 turnovers in the first 10 minutes against Stillwater and cruised to a 66-40 victory. 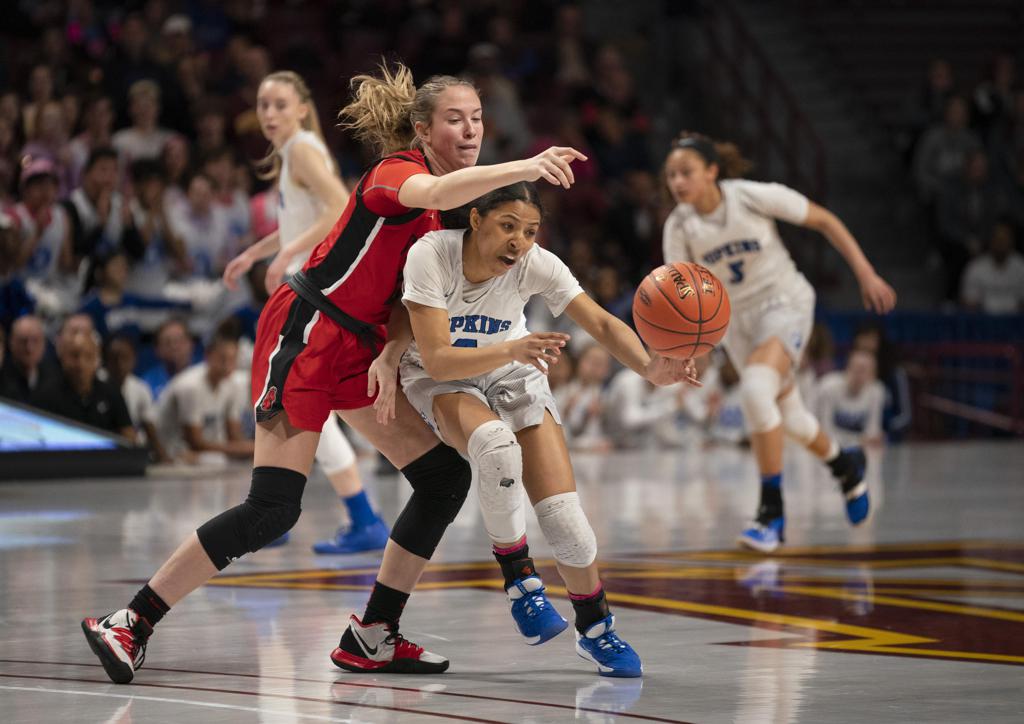 Hopkins guard Alayna Contreras (4) stripped the ball from Stillwater forward Lizzie Holder (22) as she took it upcourt in the first half. Photo: JEFF WHEELER • Jeff.Wheeler@startribune.com

Stillwater coach Willie Taylor was walking around the Williams Arena floor before the Ponies’ semifinal game against Hopkins, thinking out loud.

“I wonder if we should full-court press them,” he said to no one in particular. “I don’t think anyone has pressed them yet.”

Then he laughed and shook his head. “No. 1 [Hopkins’ Paige Bueckers] would love it if we pressed.”

Perhaps Taylor should have been more concerned about his opponent’s press.

Hopkins’ pressure in the backcourt and ability to turn defense into offense quickly turned the first 10 minutes of the Class 4A semifinals into a nightmare for Stillwater. The Royals raced to 25-6 lead, forcing 15 Stillwater turnovers, and cruised to a 66-40 victory.

“We had 21 turnovers the first half and we usually have 10, 12 for the [game],” Taylor said. “We haven’t been pressed all year long. Not being full-court pressed all season, I knew it would be tough.”

It helps, of course, that Hopkins has the country’s best high school player in Bueckers, whose floor leadership and basketball IQ solved any of the problems Taylor threw at her.

“Paige Bueckers, she’s … good,” Taylor said, recognizing the understatement the instant he said it. “I changed defenses a few times, but she’s just like a coach on the floor.”

“Unfortunately for them, I’ve got Paige Bueckers,” Cosgriff said. “She makes everybody good out there.”

The beneficiary Thursday was freshman forward Taylor Woodson. After a rough outing in the quarterfinals, Woodson went to the gym at Hopkins after the game to work on her shot.

“She got off the bus at about two o’clock. She spent about two hours working on her shot,” Cosgriff said. “You could tell it helped her.”

The victory improved Hopkins record to 30-0 on the season and was its 62nd in a row, the second-longest winning streak in state history.

Stillwater (24-6) was led by 17 points from senior forward Liza Karlen.

Hopkins didn’t waste any time ending Stillwater’s state championship dreams, forcing 15 turnovers in the first 10 minutes to take a 19-point lead and cruise to a 66-40 victory in the Class 4A semifinals.