Sophie Hart leads Farmington to a 4A title game shot

The highly recruited 6-4 Hart was a force in a 78-59 victory over St. Michael-Albertville, scoring 21 points, grabbing 16 rebounds and handing out eight assists. 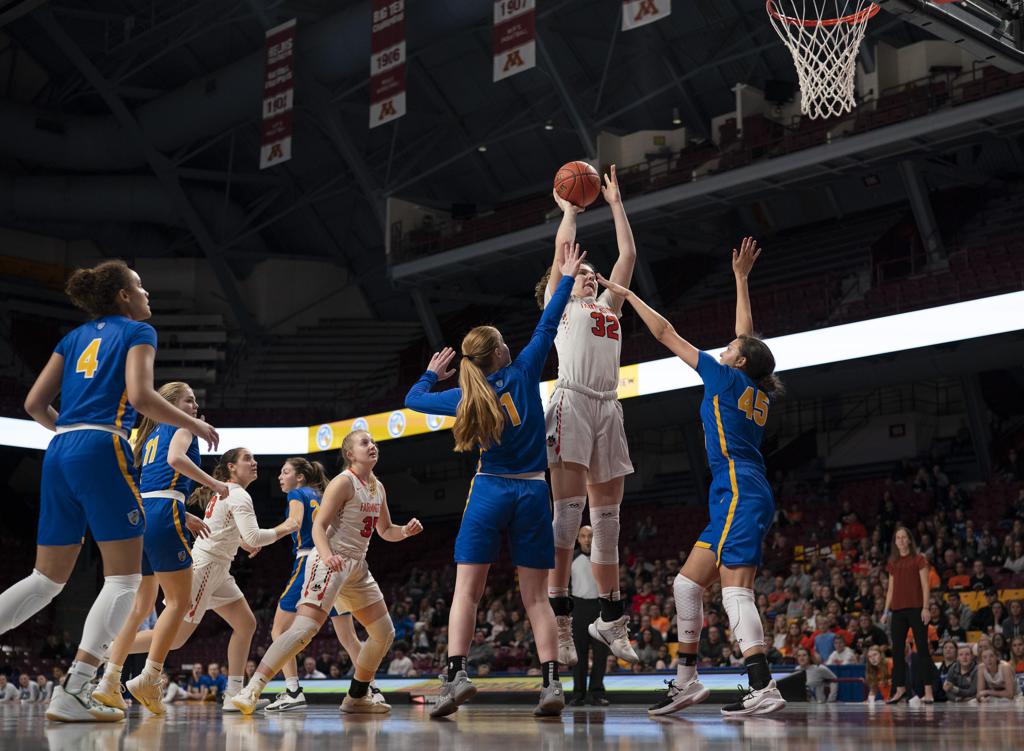 With a 6-4 center who is the centerpiece of many a Division I coach’s wish list patrolling the lane, Farmington’s game plan Thursday was simple.

The Tigers did just that, getting 21 points, 16 rebounds and eight assists from Hart in a 78-59 victory over St. Michael-Albertville in a Class 4A semifinal at Williams Arena.

“We dominated the paint, both defensively … and offensively, as most of our shots came on the attack off offensive rebounds and looking to the middle,” Farmington coach Liz Carpentier said. “We had Sophie in the paint and she could own that.”

“That Hart’s a heckuva a player,” St. Michael-Albertville coach Kent Hamre said. “She does such a nice job on the offensive boards and she dishes the ball, too. She does more than just putting it back. We threw the kitchen sink at her.”

Hart was ready for everything the Knights did.

Farmington (29-2) gained the first advantage, taking a 17-8 lead. Hart scored six points on the run, equaling her point total in the quarterfinals on Wednesday.

St. Michael-Albertville came back to tie the game 17-17, but Farmington put up another run, this time a 12-0 streak. Hart didn’t score, but she hauled in six rebounds and had three assists.

The back-and-forth continued through rest of the game, with Farmington taking a lead and St. MichaelAlbertville rallying to close the gap. Eventually, the constant need to cut a deficit became too much for the Knights to sustain.

“We can usually pick a team apart from the outside. Their strength was inside and we just couldn’t match them from outside,” Hamre said.

After trailing by nine at halftime, St. Michael-Albertville (20-9) found its range for a brief spurt, hitting five three-pointers to tie the game 44-44. But as it had all game, Farmington held firm and went on a game-clinching 13-4 run. Guard Peyton Blandin scoring eight points — finishing with a game-high 22 — and Hart dominating inside.

Hart more than redeemed herself Thursday, scoring 21 points, grabbing 16 rebounds and handing out eight assists as Farmington confirmed a date against Hopkins in Saturday’s Class 4A championship game with a 78-59 semifinal victory over St. Michael-Albertville.

A day earlier Hart was held to just six points, the result of being the object of defensive obsession by Farmington’s foe. Against St. Michael-Albertville, she routinely reached over the Knights interior defenders for baskets and rebounds. When she couldn’t find her own shot, she found her teammates for open ones.

After trailing by nine halftime, St. Michael-Albertville hit five three-pointers in the first eight minutes of the second half to draw even, 44-44.

But Farmington guard Peyton Blandin score eight points and Hart was a force inside as the Tigers responded with a 13-4 run to take a 57-48 lead they would not relinquish.

Blandin led Farmington (29-2), making its first state tournament appearance, in scoring for the second consecutive game with 22 points. Freshman Tessa Johnson had 27 points for St. Michael-Albertville (20-9).
In the first half, Farmington took the early lead with a 17-5 run. Hart had six points during the streak, equaling her output in the quarterfinal.

The Knights responded with nine consecutive points, tying the game at 17-17.

But Farmington found another spurt, largely on the strength of its deep phalanx of guards and the rebounding of Hart. The Tigers scored 12 straight, taking its biggest lead of the game, 29-17, on a layup by Rose Wille with 3:29 left before halftime.

Hart didn’t score during the streak, but she contributed six rebounds and three assists.

A three-pointer just before halftime by Farmington’s Maleah Scott gave the Tigers a 36-27 advantage at the break.