After back-and-forth first half, DeLaSalle wins in a runaway

The defending Class 3A champions relied on a swarming defense and strong perimeter in a 74-52 victory over Simley. 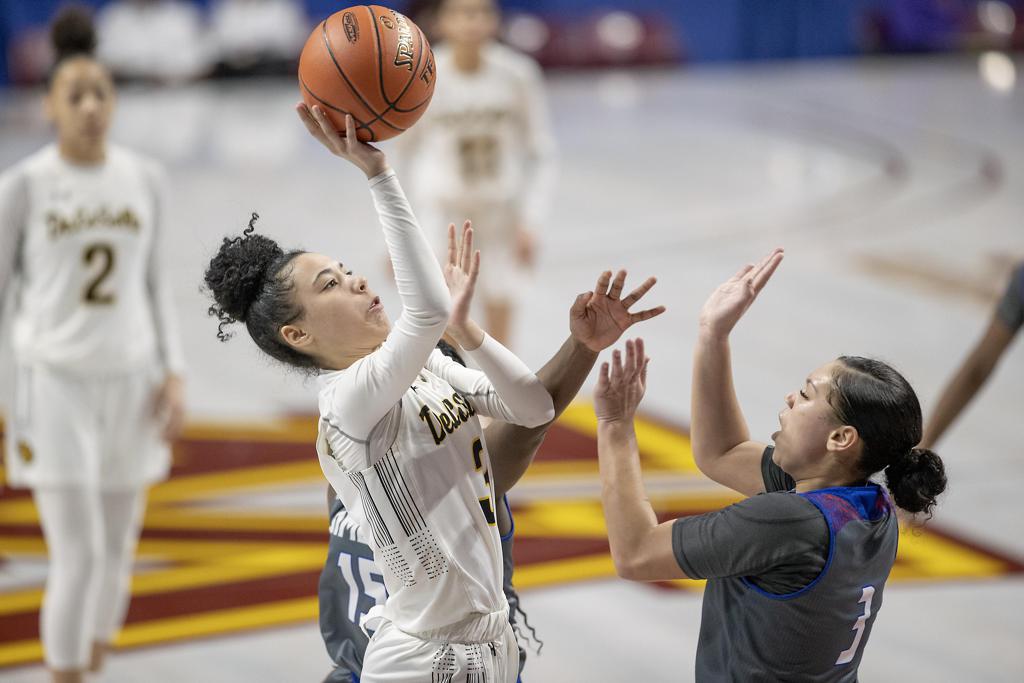 DeLaSalle’s Kennedy Klick drove to the basket despite defensive pressure from Simley’s Ravyn Miles in the second half of the Class 3A semifinal Thursday at Williams Arena. Photo: ELIZABETH FLORES • liz.flores@startribune.com

For DeLaSalle’s opponents, getting stopped by the Islanders’ defense is the first problem. It’s what the best girls’ basketball team in Class 3A does next that leaves foes reeling.

Defending champion DeLaSalle feasted on miscues and turned a back-and-forth affair with Simley into a 74-52 rout in Thursday’s semifinal at Williams Arena. The Islanders advance to play Becker  in the championship game at 6 p.m. Saturday.

The press defense applied by the No.1 seed Islanders (26-4) produced many of the Spartans’ 22 turnovers. In turn, they outscored Simley 30-9 in points off turnovers.

“Offensively, we weren’t quite as patient and some of our missed shots turned into easy opportunities the other way,” Spartans coach Mark Stensgard said.

Beyond the turnovers, even missed Simley shots became the chum for the Islanders’ school of sharks.

“When they rushed their shots, we attacked the boards so that we could transition to offense,” senior Nurjei Weems said.

The game started as a fair fight. Both teams looked inspired as Simley took a 18-12 lead with a little less than eight minutes to play in the first half. The Spartans broke the press and attacked the basket in pairs, often springing one another with a deft pass to create open looks near the rim.

“We started out strong, we were getting good shots and making them,” Stensgarad said.

“Our help defense, I think, got them a little frustrated and that’s when they stared kicking it out,” Weems said.

A resulting 11-0 Islander run closed out the first half.

“It really boosted us and helped us come out with intensity in the second half,” said sophomore guard Sydney Runsewe, who made two three pointers to close the first half. Her 19 points were the most of five Islanders who scored in double figures.

Players for No. 4 seed Simley (28-3), though disappointed by the outcome, said their remarkable season won’t be forgotten. The Spartans entered the semifinal on a 25-game winning streak.

“This was a special season,” senior forward Tiwaah Danso said. Her younger sister, Acheampomaa, led the Spartans with 18 points.

A back-and-forth affair for much of the first half, the first Class 3A state tournament semifinal Thursday became a runaway 74-52 victory for defending champion DeLaSalle.

The No.1 seed Islanders (26-4) led 33-25 at halftime, a late surge owing to their two best attributes -- swarming defense and strong perimeter shooting.

No. 4 seed Simley (28-3) gave DeLaSalle all manner of trouble near the basket through much of the first half. But the Islanders’ defense countered, blocking or altering shots near the rim. The Spartans’ 25-game winning streak ended.

So did their season. The Minnesota State High School League announced Thursday the cancellation of the tournament’s third-place games due to the COVID-19 disease and public health concerns.