The opponents in Thursday’s first Class 4A semifinal were supposed to meet in January. Plus coronavirus concern, a Simley streak and a record set. 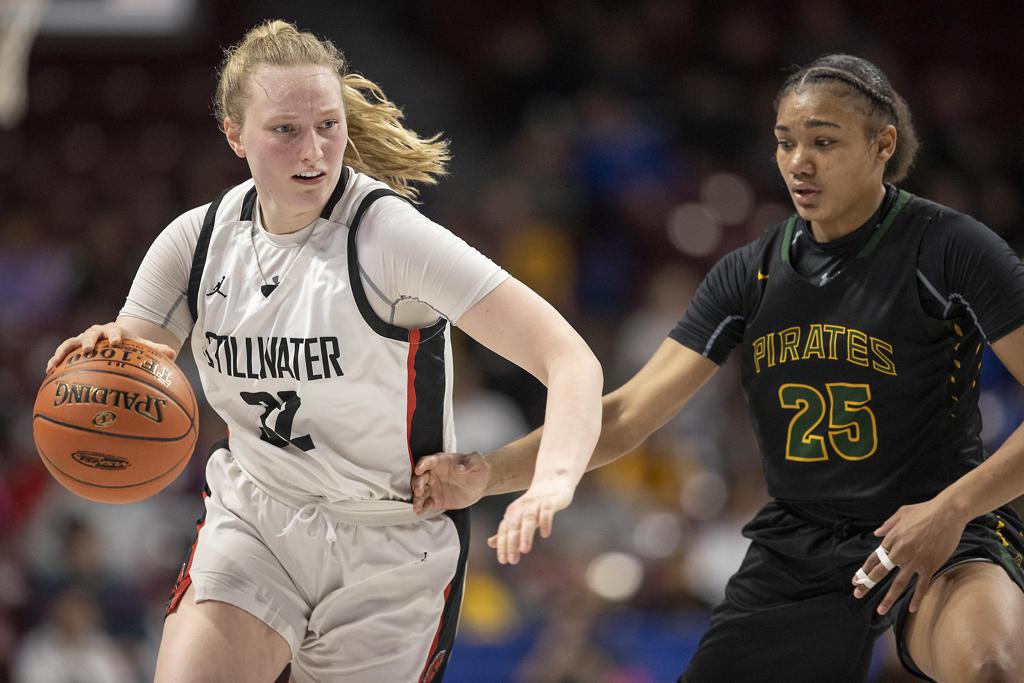 Liza Karlen, left, and Stillwater will get a chance to face Hopkins in Thursday's semifinals in a rematch of the 2019 Class 4A title game. The two teams were to play in January, but the game was cancelled because of a snowstorm.

Hopkins and Stillwater, the opponents in Thursday’s first Class 4A semifinal, were supposed to meet in January. But a snowstorm forced cancellation of the Minnesota High School Basketball Hall of Fame Classic on Jan. 18 and the game between the two teams in the 2019 state championship won by the Royals was not rescheduled.

To the disappointment of Stillwater players.

“All of us were super bummed out that we couldn’t play them in the regular season,” Stillwater post Liza Karlen said. “A lot of people outside of Stillwater and Hopkins wanted to see that matchup, too. But I think we’re more prepared, I think we’re more experienced than last year. I’m looking forward to it and I know a lot of the girls on the team are, too.”

Stillwater coach Willie Taylor had a different idea. “I’m scared to death,” he said jokingly, looking at Karlen. “What are you talking about?”

Amid concern about the spread of COVID-19, the Minnesota State High School League posted Wednesday morning on its website at mshsl.org that it “is continuing to follow the recommendations’’ of the Center for Disease Control and the Minnesota Department of Health “in regards to hosting events.’’

The league said all of its tournaments “are being held as scheduled.’’ In addition to the girls’ basketball tournament this week at Williams Arena, Maturi Pavilion and Concordia University, St. Paul, the adapted floor hockey state tournament is Friday and Saturday at Bloomington Jefferson High School.

Defeating Holy Angels 70-62 on Wednesday pushed Simley’s winning streak in girls’ basketball to 25 consecutive games. The sustained success sprang from December dejection. Simley of Inver Grove Heights fell 58-51 to Stillwater, the runner-up in the 2019 Class 4A state tournament. Spartans’ players took no consolation in the quality of their victorious opponent.

“That kind of drove them really hard the rest of this season,” Simley coach Mark Stensgard said. “It has really driven the seniors and that kind of filters down through the whole team.”

Currently with 1,737 career points, Kramer passed current Iowa State junior Rae Johnson’s mark of 1,730 on a three-pointer with eight seconds left in the first half.

“It means a lot. I played with Rae her senior year, so I know how talented of a player she is,” Kramer said. “But … that’s not what I’m here for. I want to win this next round and get to this state championship.”