The Knights made a tournament record 13 three-pointers en route to a 67-58 win in the 4A quarterfinals. 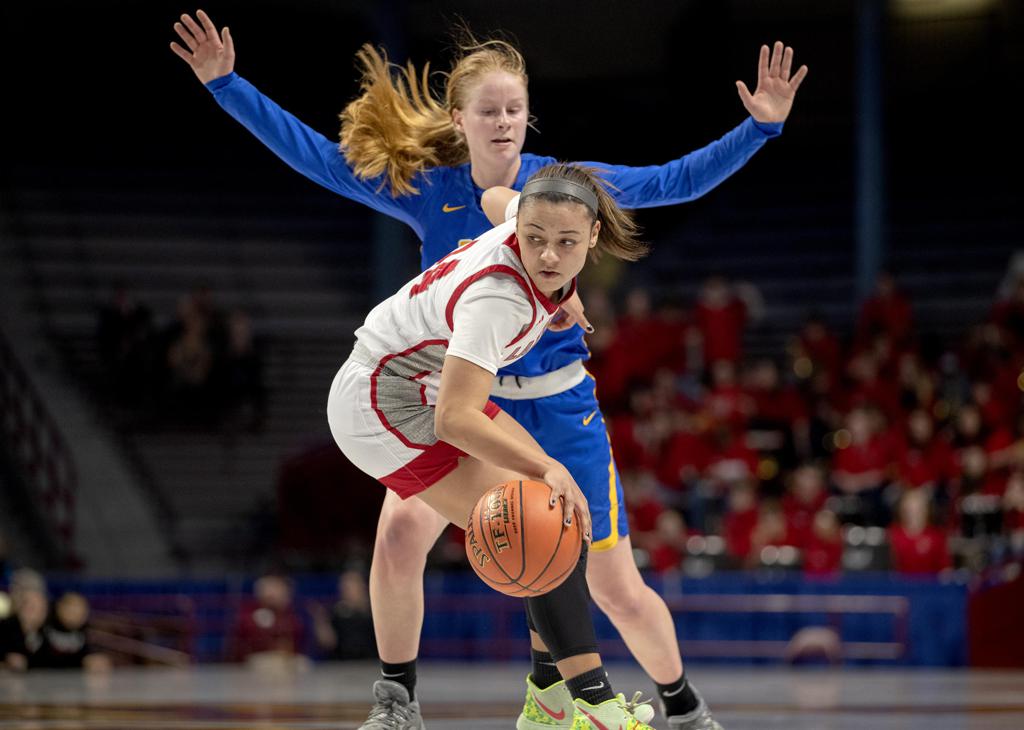 Sarah Kuma (14) of Lakeville North was defended by MacKenzie Kramer (1) of St. Michael-Albertville in the first half. Photo: CARLOS GONZALEZ • cgonzalez@startribune.com

St. Michael-Albertville was open from deep. So the Knights let it fly.

And they made them, to a tune of  a tournament-record 13 three-pointers in cruising to a 67-58 state quarterfinal victory over Lakeville North on Wednesday at Williams Arena.

The bulk of the Knights’ offense came in the first half, when they made 11 of 18 attempts from beyond the arc. It was part of a 15-for-25 shooting effort overall to take a 45-25 lead into halftime.

It came as no shock to St. Michael-Albertville coach Kent Hamre.

“I’m more surprised when it doesn’t go in,” he said.

After prioritizing keeping the Knights (20-8) out of the lane in the first half, the Panthers clamped down to begin the second half. St. Michael-Albertville missed its first eight attempts as Lakeville North attempted to slow the game down. Conversely, the Panthers went on a 11-2 run to cut the deficit to 11.

“We got a little bit comfortable,” Hamre said.

The Panthers (18-11) cut the lead to seven with 1:08 to play in the game but drew no closer. Lakeville North made just five of 21 three-point attempts. Senior Lauren Jensen led the Panthers with 22 points.

“We had to adjust in the second half, and it seemed to work,” Lakeville North coach Shelly Clemons said. “Looking back, I sure wish we would’ve started the game that way.”

“There’s been times when you’re happy to get [to the state tournament] and you’re playing with house money,” Hamre said. “This group isn’t house money. We’re here to win the tournament.”

Paul Hodowanic (paul.hodowanic@startribune.com) is a University of Minnesota student on assignment for the Star Tribune.

St. Michael-Albertville made a tournament-record 13 three-pointers and cruised to a 67-58 quarterfinal victory over Lakeville North at Williams Arena.

The bulk of the Knights' offense came in the first half Wednesday, when they drained 11 of 18 attempts from beyond the arc.  It was part of 15-of-25 shooting overall to take a 20-point lead into halftime.

The Knights' hot shooting went cold as they opened the second half. They missed their first eight attempts as Lakeville North went on a 11-2 run before the Knights regained momentum. The Panthers cut the lead to seven with 1:08 to play in the game, but drew no closer.

The Panthers made five of 21 three-point attempts.

St. Michael-Albertville will play Farmington in the semifinals on Thursday at 8 p.m. at Williams Arena.