Farmington holds off Eden Prairie to advance to 4A semifinals

The Tigers' Peyton Blandin scored 18 points and Paige Kindseth had 13 points and 10 rebounds to lead the No. 2 seeded to a 58-54 victory. 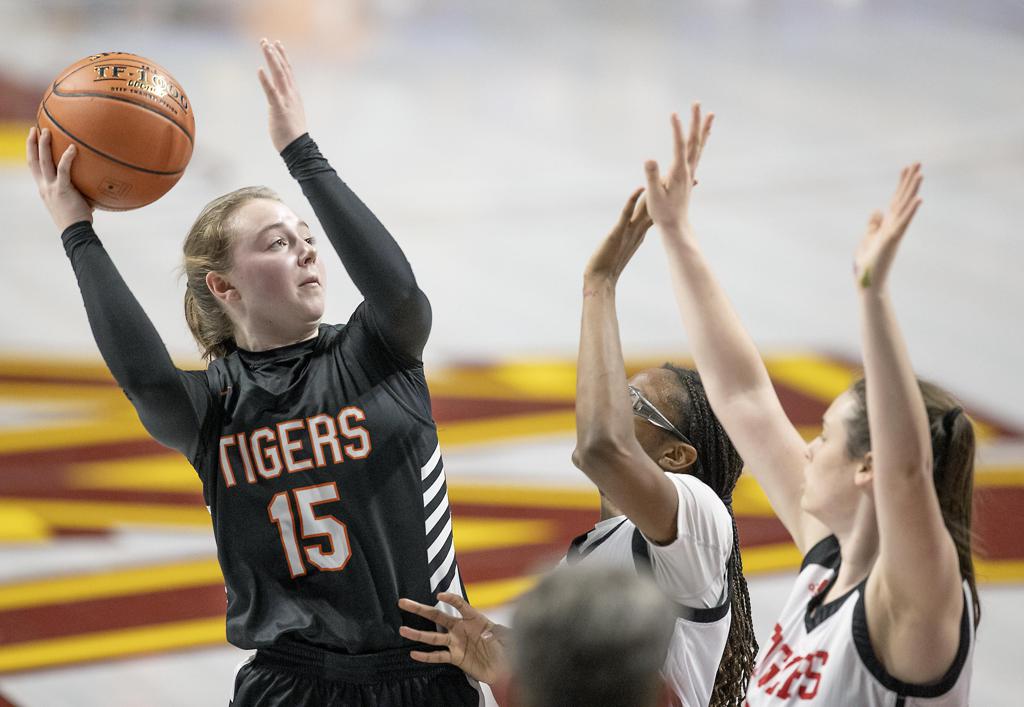 Farmington’s Paige Kindseth drove to the basket above Eden Prairie’s defense in the first half of the Class 4A quarterfinal Wednesday at Williams Arena. Photo: ELIZABETH FLORES • liz.flores@startribune.com

The Tigers survived those setbacks to advance to the state tournament for the first time in team history. No way a little end-of-game chaos Wednesday was going to do them in.

Farmington held off a frenetic late rally by Eden Prairie to pull out a 58-54 victory.

The Eagles had trailed by as many as six points in the second half but cut the deficit to 55-54 when junior guard Destinee Bursch made a steal and a layup with 1 minute, 3 seconds left. Eden Prairie had three opportunities to tie the score or go ahead in the final minute but failed to convert them. 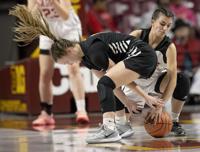 “We did a good job of staying composed,” Farmington coach Liz Carpentier said. “And we hit some free throws when it counted.”

Farmington (28-2) got 18 points and a steady hand from fill-in point guard Peyton Blandin, who took over when Molly Mogensen, the team’s all-time leading scorer, sustained a broken foot in early February.

Blandin has made the transition painless for the Tigers even though she hadn’t played the position since eighth grade.

“Today [was] her best game all season,” Carpentier said. “She came out and played confident, hit some big shots in the first half and handled the pressure well toward the end of the game.”

Guard Paige Kindseth, who missed a large portion of the season because of an injury, had 13 points and 10 rebounds. Post Sophie Hart had six points and grabbed 16 rebounds.

“It was really tough because I haven’t played point that much in the past years because Molly has been there,” Blandin said. “And with Paige being out, she’s a really key player for our team, I’ve felt like I really had to step up.”

“A couple of things had to go our way that didn’t,’’ Eden Prairie coach Ellen Wiese said. “A couple of shots we usually make but didn’t. But I’m just super proud of these kids.”

Paige Kindseth had a double-double, 13 points and 10 rebounds, and Peyton Blandin scored 18 points to help No. 2-seeded Farmington survive with a 58-54 victory over Eden Prairie.

Eden Prairie had cut the lead to one, 55-54, on a driving basket by Destinee Bursch with 1:03 left and regained possession after Farmington was called for traveling.

But the Eagles turned the ball over with 41.1 seconds left. On the inbounds, Eden Prairie committed an intentional foul and Kinseth hit one of two free throws.

Farmington then turned the ball over when it got the ball back, but Eden Prairie’s Nia Holloway missed a layup that would have tied the game.

Farmington then converted two of four free throws in the final seconds to seal the victory.