The Royals' Maya Nnaji controlled the lane, adding seven rebounds and three blocked shots in an 85-55 victory over the Bluejackets. 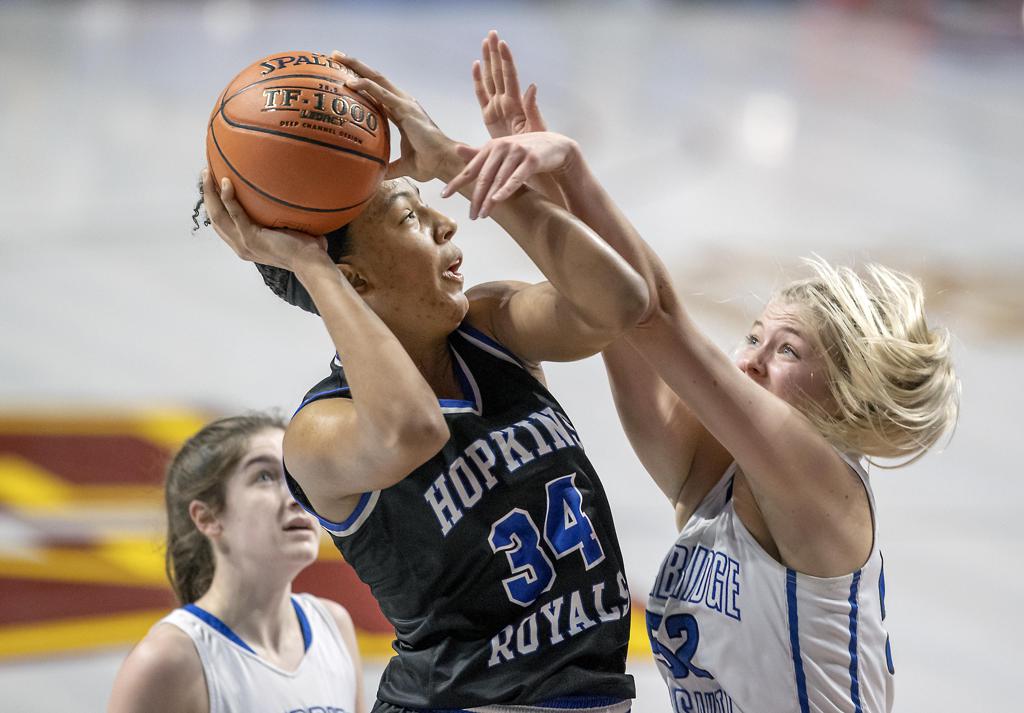 Hopkins’ Maya Nnaji was fouled by Cambridge-Isanti’s Jana Swanson in the first half of their Class 4A quarterfinal Wednesday at Williams Arena. Photo: ELIZABETH FLORES • liz.flores@startribune.com

Hopkins coach Brian Cosgriff and Royals’ superb senior Paige Bueckers rarely have conflicts. But they were diametrically opposed on one topic after the Royals’ 85-55 victory over Cambridge-Isanti in the Class 4A quarterfinals.

A question was posed: Do they like playing the early game, in this case 10 a.m., in the first round?

“I love playing it,” Cosgriff said. “You get a nice fan support. And it generally means you’re the No. 1 seed.”

It mattered little in terms of results. Hopkins forced 13 first half turnovers and got 17 points from 6-4 sophomore post Maya Nnaji in the first 18 minutes to take a 54-24 halftime lead.

“You don’t appreciate their size until you’re down on the court with them,” Cambridge-Isanti coach Jody Ledahl said. “It was an eye-opener to see how big they were.”

Nnaji said she knew from pregame preparation that she had a chance for a big game. She finished with 23 points, seven rebounds and three blocked shots.

“We knew they were smaller in size and that we had to take advantage,” Nnaji said. “I needed to be a rebounding presence, especially because they were shorter than me.”

Bueckers scored just seven points, her lowest point total of the season, but she took just four shots from the floor. She spent most of the game getting her teammates involved, as evidenced by her seven assists.

“I’ve never really cared about how many points I score,” Bueckers said. “For the tournament now, I just have to get everybody’s confidence up and playing well at the right time.”

Hopkins improved to 29-0 with its 61st consecutive victory.

Hopkins got its quest for a second consecutive Class 4A state title started in the right way, dominating Cambridge-Isanti 85-55 for its 61st consecutive victory.

The Bluejackets (20-10) had no answer for Hopkins’ 6-4 sophomore post Maya Nnaji, who controlled the lane and finished with 23 points, seven rebounds and three blocked shots. Paige Bueckers scored just seven points, a season-low, but she only took four shot and spent most of the game getting her teammates involved