A one-point defeat in last year’s section final served as motivation to help get the Wildcats into the Class 3A tournament that starts Wednesday. Plus tourney tidbits and how to watch. 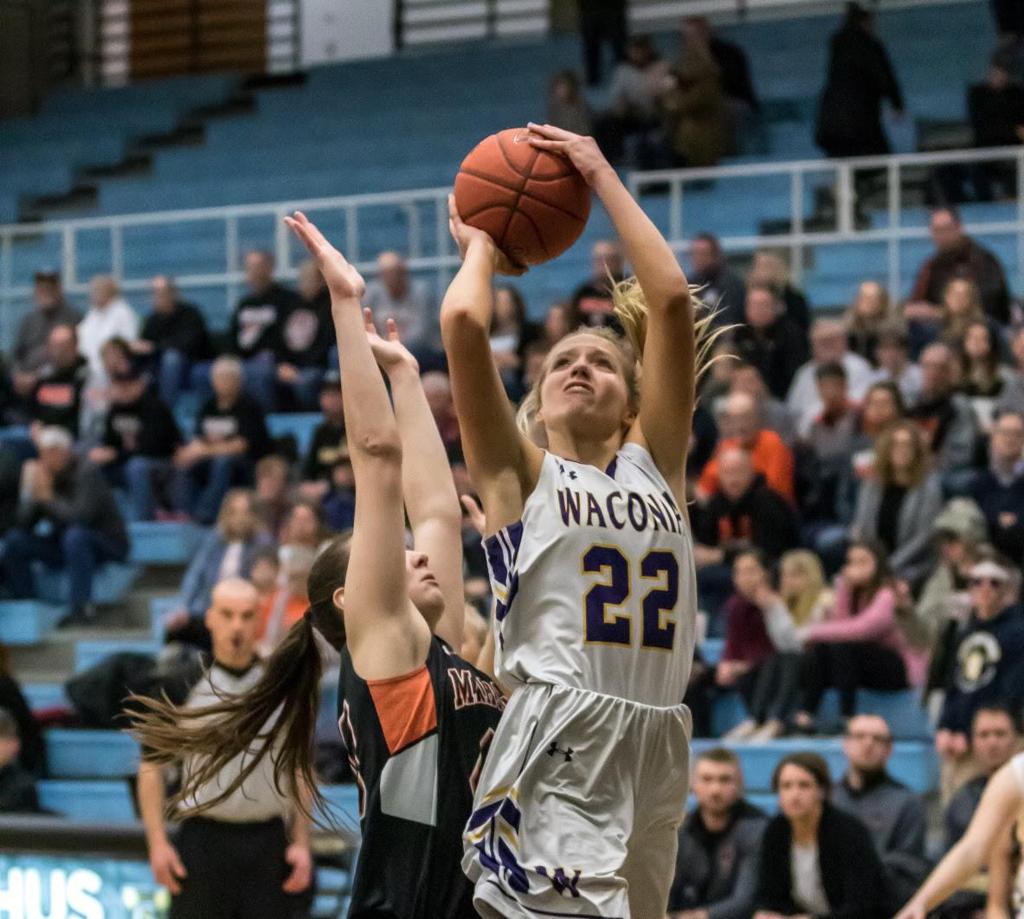 Waconia sophomore Audrey Swanson went up for a basket against Marshall in the section final. Photo: Roxanne Kuerschner

For a program that waited 48 years to celebrate the accomplishment, a 60-second delay didn’t matter. For current players, the clock really began ticking last March after a one-point loss in the section final.

“We were all just devastated because we were one basket away,” senior guard Tess Johnson said. “Coming back this year, we knew we had to get to the other side.”

Waconia (19-10) opens Class 3A state tournament play at 4 p.m. Wednesday against No. 3 seed Red Wing (26-2) at Maturi Pavilion on the University of Minnesota campus.

Students and parents sent off the team with a pep rally in the gymnasium. Hanging on the wall among its purple and gold counterparts was the girls’ basketball banner. The years of seven conference championships are listed, soon to be joined by “2020” under the section champions heading.

Dusty Neibauer, in his first year as head coach after 13 years as an assistant, shared his excitement with the crowd after the Wildcats were “achingly close” last season.

Waconia fell 52-51 to Robbinsdale Cooper in the Section 6 final. A move to Section 2 this season didn’t seem to be the cure. The Wildcats lost 79-75 on Feb. 8 at section foe Marshall, a setback Waconia’s players didn’t fret.

“We knew we could have won that game and it helped us a lot that we did lose,” Johnson said. “We had to prove it to them.”

Clutching the microphone, Neibauer told the crowd on Tuesday, “As I told the players, ‘You don’t walk into making history. You rip it from the arms of anyone who stands in your way.’ ”

Johnson credited sophomores Ava Stier and Audrey Swanson for their larger roles this season and helping Waconia over the hump.

“It hit me when we were up by about 10 with about one minute left,” Swanson said. “I was on the baseline when we were shooting free throws and I looked at my teammate across the paint and I almost started crying because we knew we did it.”

“Those games gave us something extra to bring out in the big games,” Johnson said.

Star Angel: Holy Angels sophomore Grace Massaquoi, who didn’t play high school basketball last year, came off the bench to score a season-high 23 points for the Stars the Section 6 title game. She attended Minnetonka as a freshman and has played AAU basketball.

Three-peat chaser: No. 1 seed DeLaSalle is in enjoying a second basketball renaissance. Repeating as champions would allow the Islanders to chase the school’s three-peat teams from 2011 to 2013. Senior Nurjei Weems leads a young but experienced team.

Red Wing redemption: Red Wing, the top seed into the Section 1 playoffs last season, was dumped in the semifinals by No. 4 Austin. Motivated to redeem themselves this year, the Wingers won their two playoff games by an average of 36 points.

Streaking Spartans: No. 4 seed Simley returns for the first time since 2014. Senior guard Sydney Stensgard scored 29 points in the Section 3 final. The victory was the Spartans’ 24th in a row – tops among Class 3A tournament teams. Becker has won 22 consecutive games.

Tickets, how to watch