Something special from the get-go: Paige Bueckers, Star Tribune Metro Player of the Year

The UConn-bound Hopkins star, on the verge of a second undefeated season and state title, is the first three-time winner of the award. 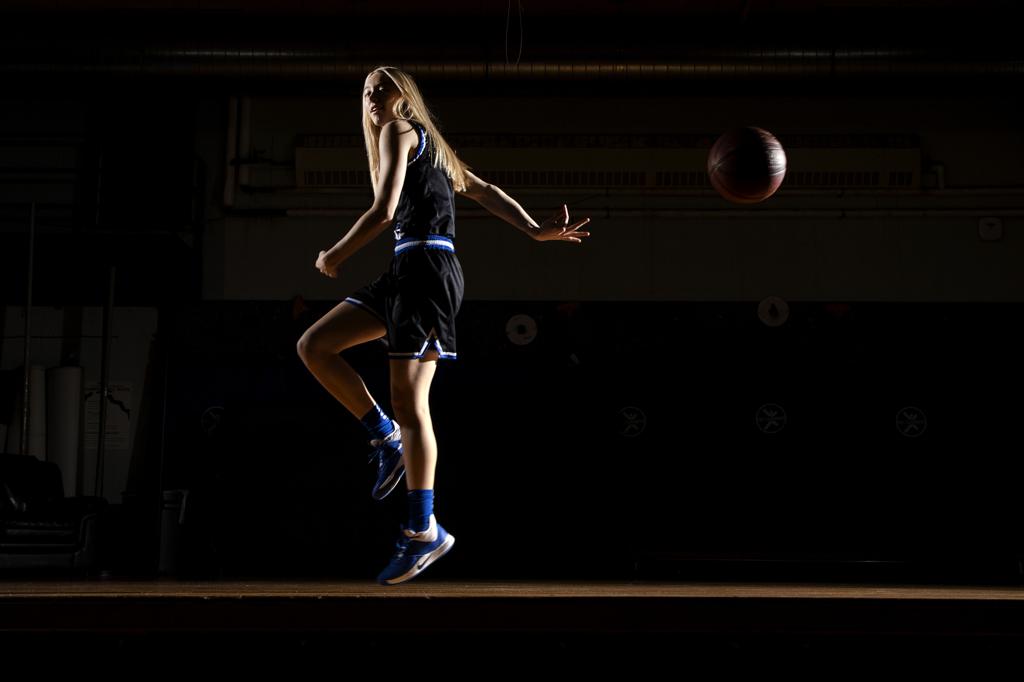 Paige Bueckers of Hopkins is the Star Tribune Metro Player of the Year 2020. She is the first to win the award three times. Photos: CARLOS GONZALEZ ¥ cgonzalez@startribune.com

The national stories are coming faster than ever: SLAM Magazine Online, Bleacher Report, ESPN and so on. Her Instagram page scoops up followers by the ladle-full, now up to more than 388,000. She’s been repeatedly labeled “the best player in high school hoops” or some variation on that theme. NBA players use down time to attend her games.

These are heady times for Paige Bueckers. Her slick handles, assassin’s mentality and ability to turn a mundane basketball play into an eye-catching, did-you-see-that moment has made her the “It” girl in the prep basketball world.

Much is expected of her. Signed with women’s basketball blue-blood UConn, Bueckers has already been tabbed by Huskies legendary coach Geno Auriemma as the next Diana Taurasi, the star guard who led them to three consecutive NCAA championships in the early 2000s. He believes Bueckers is the player who can restore UConn to its position of dominance.

She’s already led Team USA to a World Championship and will be a shoo-in to make any international team that invites her.

Honors and accolades are stacking up: USA Basketball Female Athlete of the Year, McDonald’s All-American, Gatorade National Player of the Year, with more expected.

And now, Bueckers is the first three-time Star Tribune Metro Player of the Year. 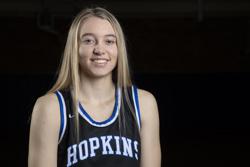 Through it all, there’s been Hopkins. For all Bueckers has achieved, it’s her time with a highly visible, wildly successful high school team that brought her to prominence and for which she’s still identified most frequently.

After six years with the program — five of them on the varsity — and finally a state championship last March after three consecutive runner-up finishes, she has, at most, three games left in her school’s blue, black and white colors. The Royals shoot for a second consecutive state title and undefeated season in this week’s girls’ basketball state tournament.

“I think about it for about five seconds each time because then I start to tear up when I think about it actually being over,” Bueckers said. “I’m just trying to enjoy it a little longer.”

Playing up in third grade

There was little doubt when she was growing up in St. Louis Park that Bueckers’ life was going to be driven by athletics. Her innate dexterity still sticks out to her father, Bob.

“She’s always been super athletic, even at a young age,” he said. “We’d play catch with a football in our house and you could rifle it at her and she’d always catch it. She always had the hand-eye coordination and the balance you need to be a great athlete.”

He and his friends still marvel about a game Paige played when she was 8 years old.

“She was in third grade, playing up on the fifth-grade traveling team,” he recalled. “I was coaching the team and I had some buddies come out to watch the final of a tournament. There were eight seconds left and we were down by five. We’d only made, like, one or two three-pointers all year, but Paige drains a three. Then she steals the inbounds pass and hits a floater to send the game to overtime. We ended up losing, but when I see my buddies, we still talk about that.”

She excelled at pretty much every sport she tried. She even played Little League baseball with a boys’ team for a couple of years. But for Bueckers, it always came back to basketball.

Fitting in at Hopkins

She was in sixth grade when Hopkins entered the picture. Bueckers attended the Class 4A championship game at Williams Arena. Hopkins defeated Eastview for a state title and, without knowing it, landed the best player in program history.

“I remember the way they dominated every game,” she recalled. “The standard was set so high, either state championship or nothing. That was something I wanted to be a part of.”

She didn’t make the varsity in the seventh grade — she was only 5-4 — but that season left a lasting impression. “It was kind of intimidating at first. Nia Hollie, Ashley Bates, they were big D-I athletes and that’s where I wanted to be,” Bueckers said. Not so intimidating that she kept her skills to herself. And it wasn’t long before the older Royals were getting a taste of Bueckers brought.

Photo gallery: Up close and personal with Paige Bueckers

“I remember multiple times I crossed [over] Ashley Bates. I crossed [former Royal] K’Aezha Wubben, too. They were really great defenders. That’s when I knew I was pretty good,” Bueckers said.

By eighth grade, she was a regular in Hopkins’ galaxy of stars. Coach Brian Cosgriff knew he had something special in Bueckers, but it was a game against Elk River that season that convinced him just how good she could be.

“She went either seven-for-eight or eight-for-nine from three. She essentially won the game for us as an eighth-grader,” he recalled. “At that time, [current Boston College head coach] Marisa Moseley was an assistant at UConn. She used to be an assistant at the U. I called her, said ‘Marisa, you’ve got to check this kid out. She’s going to be great.’ I sent them the Elk River film and somebody took a look at her that summer. Geno [Auremma] has been in our gym ever since.”

Flair on the court

While Bueckers’ offense deserves the raves she gets, it’s her passing ability and willingness, even desire, to play defense that sets her apart.

She admits that nothing gives her more pleasure on a basketball court than dropping a sweet no-look pass to a teammate for an easy hoop. “She’s always played with a little flair,” Bob Bueckers said. “She knows it’s entertainment and she wants people to enjoy watching her.”

They enjoy playing with her as well. She has a knack for making them look good.

“The way she sets up her teammates is just crazy,” said Lauren Jensen, Lakeville North’s outstanding guard who played with Bueckers in AAU basketball. “She’s not selfish at all. She knows where to find you. It’s fun playing with her.”

For opponents, their relationship with Bueckers takes on a love-hate tone. They can’t help but admire what Bueckers can do on the court. They just don’t like it when she does it to them.

Mimi Schrader was a point guard at Wayzata until graduating in 2019. Now in her first year playing basketball at the U.S. Naval Academy, her memories of playing against Bueckers are still vivid.

“She is difficult to play against because she will do whatever it takes to win. If she needs to score, she will score. If someone on her team is hot, she dishes,” Schrader said. “She was always fun to play against. She made me a better player because I knew I had to bring my best game.”

And then there’s defense. There was never a worry that Bueckers was too good to get dirty. She was mesmerized by Hopkins’ defensive mentality the first time she saw it and she’s been committed to stopping the other team ever since.

“Everybody on the team was fearless,” she said, admiration evident in her voice. “They played together, they played hard. That set the tone for me.”

A player with a rare set of skills shows up occasionally. It’s what that player does with those skills that elevates them. Bueckers is defined by her desire to improve and her appetite for competition. And not just on the court.

Special dream to the end

Tara Starks, Paige’s longtime AAU basketball coach and mentor and the mother of former Hopkins’ standout TT Starks, recalled when Bueckers took an advanced-placement class with her daughter. “The teacher said nobody ever got a grade over a ‘B’ and TT told her that,” Tara Starks said. “Paige said ‘I’m going to get a higher grade.’ And she got an A. TT asked me ‘Mom, how’d she do that?’ I told her ‘Because you said no one ever got higher than a B.’ That’s when I understood how special she was.”

There were times, Starks said, when Paige was younger and she’d ask her for a ride to practice.

“She’d ask me to pick her up at the gym and then we’d go to workouts,” Starks said. “When we were done, she’d ask me to drop her off at Life Time fitness. You can be a great player, but if you don’t put in the work, you’re not going to get what you want. And Paige understands that.”

With Hopkins a prohibitive favorite to win another state title, Bueckers’ final game as a Royal will most likely be Saturday. The end of an era for the most celebrated girls’ basketball player in state history.

“When you have somebody like that, you don’t want to let her go,” Cosgriff said. “But you have to. I get to coach her another game and the entire state gets to watch her play.”

While she’s plenty ready to move on to the next phase in her life, Bueckers said her time at Hopkins has been special. 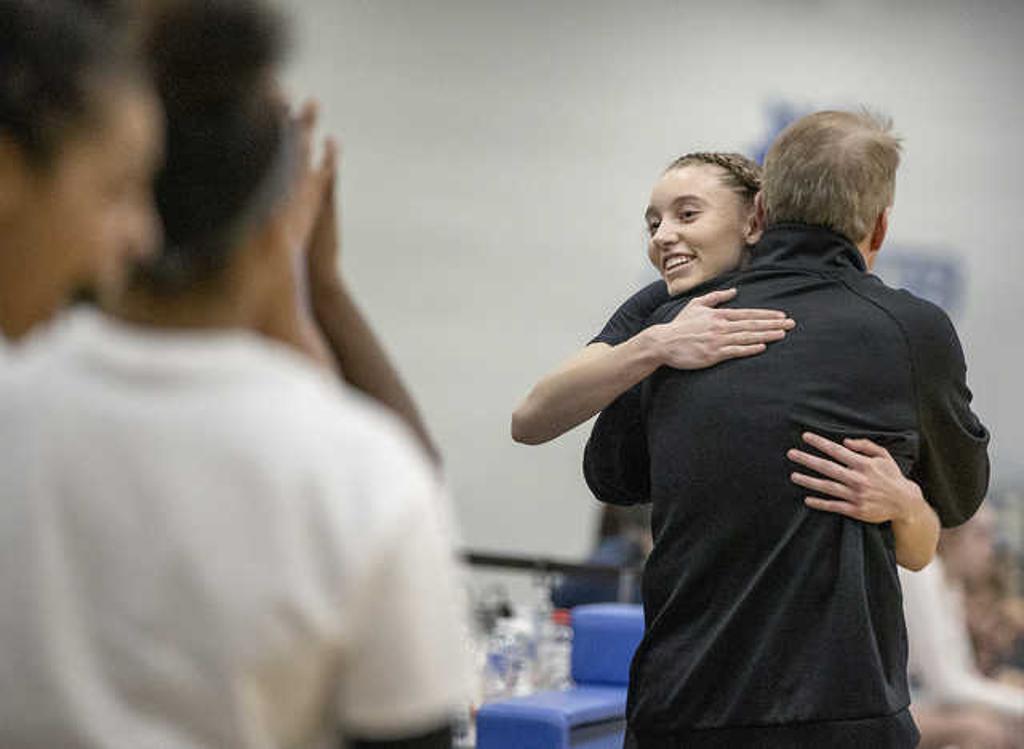 Paige Bueckers gave her coach Brian Cosgriff a hug after leaving the game against Minnetonka on Feb. 21 at the Lindbergh Center in Minnetonka. Photo: ELIZABETH FLORES • liz.flores@startribune.com

'Paige Buckets' at a glance