The Eagles, who lost to the Hawks during the regular season, got 17 points from Nneka Obiazor and 16 from Myra Moorjani in a 70-56 victory. 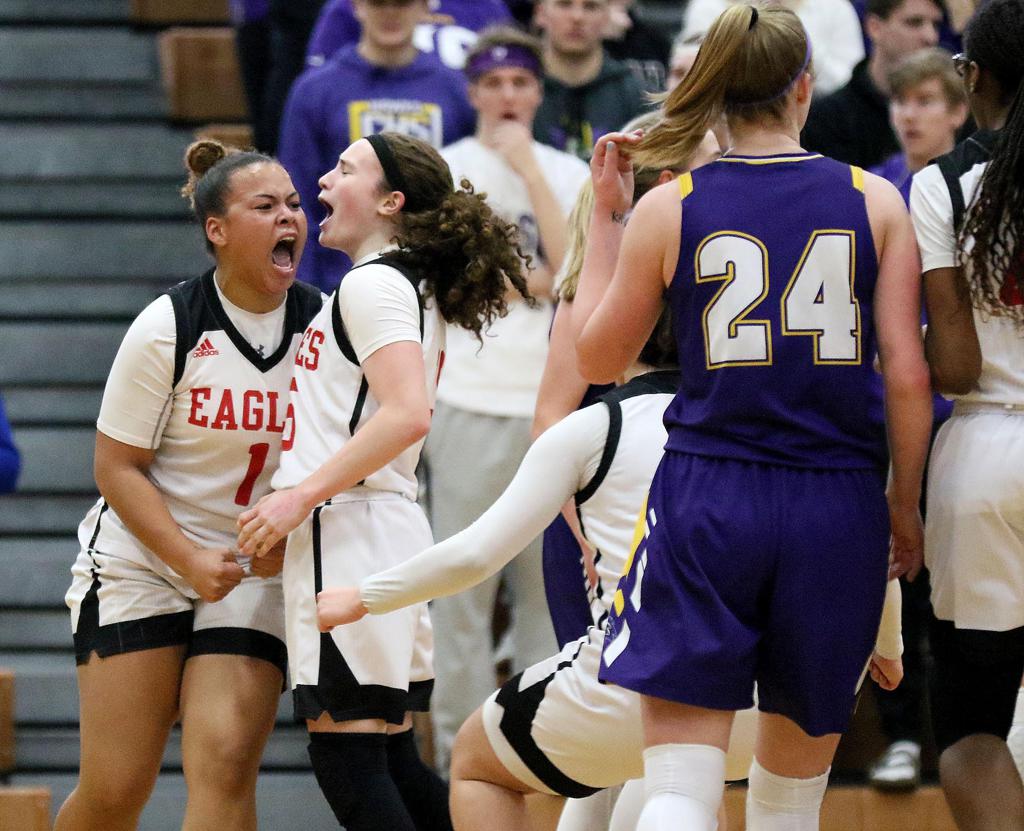 Eden Prairie's Nneka Obiazor, left, celebrates a basket and a foul with teammate Molly Lenz in the first half of the Eagles' game against Chaska. Photo: DAVID JOLES • david.joles@startribune.com

After Eden Prairie’s 70-56 victory over No. 1-seeded Chaska in the Class 4A, Section 2 championship game Friday, Eagles coach Ellen Weise admitted her team’s disappointing 2019 finish, when it lost the section final at home, was wedged in her brain all season.

“It never left my mind the entire year,” Weise said. “You’ve got to keep it with you, right? You’ve got to use it.”

The No. 2-seeded Eagles went on the road to win their biggest game of the season against a highly respected opponent. Chaska (24-4) went into the game with a 15-game winning streak.

To prepare her team for another shot at a section title, Weise set up a difficult regular-season schedule. The Eagles lost 11 games, but the end result was a rousing success.

“Every night was a grind,” she said. “I made the hardest schedule I could. It helped us tremendously. We’ve seen everything.”

The Eagles raced out to a 14-3 lead Friday. The fast start rocked Chaska, a team with no seniors, and the Hawks struggled to recover.

“We have kids who haven’t been in this situation before,” Chaska coach Tara Seifert said. “They played their hearts out, but we just couldn’t connect on our shots.”

The Hawks, normally a strong outside-shooting team, made just four of 24 three-point attempts.

Nneka Obiazor scored 17 points and Myra Moorjani added 16, including 11 in the second half, for Eden Prairie.

The Eagles will make their first state tournament appearance since 2014.

Eden Prairie used a motion offense and switched defenses regularly to confuse host Chaska en route to a 70-56 victory over the No. 1-seeded Hawks in the Class 4A, Section 2 championship game.

Nneka Obiazor scored 17 points and Myra Moorjani scored 13 for the Eagles, who had lost to Chaska by 13 in early December.