Hopkins too much for Wayzata, again 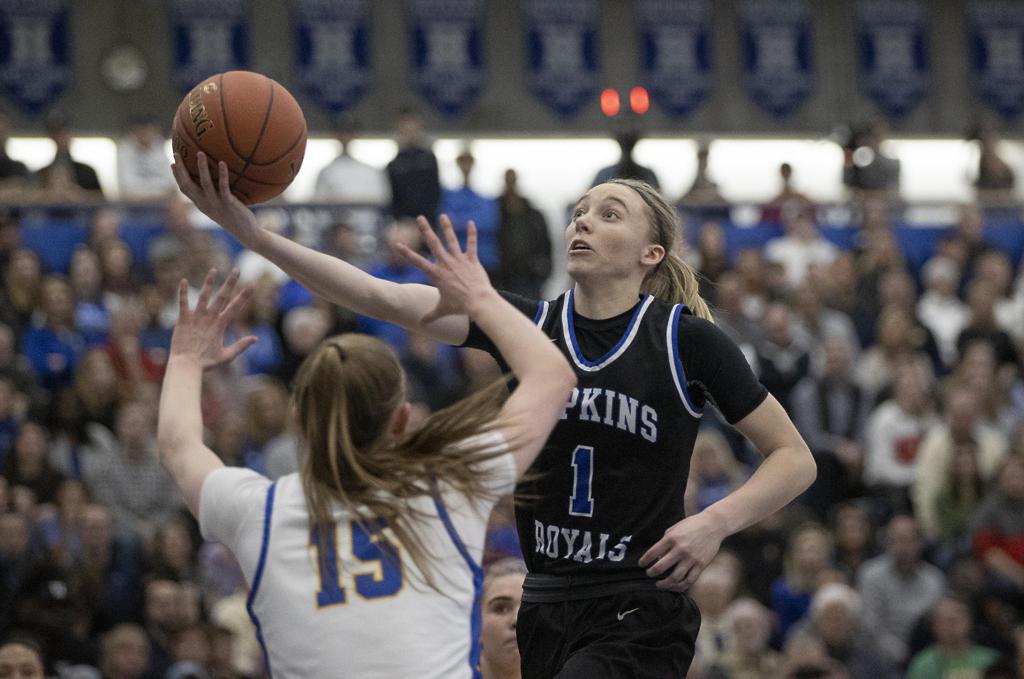 Hopkins’ Paige Bueckers went up for a basket and drew a foul from Wayzata’s Lydia Hay in the second half of the Class 4A, Section 6 championship Thursday at Hopkins. Photo: ELIZABETH FLORES • liz.flores@startribune.com

With 49.9 seconds left in Hopkins’ 86-76 victory over Wayzata in the Class 4A, Section 6 championship game Thursday, Paige Bueckers showed her true self.

The undefeated Royals had struggled to put the Trojans away, but in the final minute, a steal and a pass from Bueckers ended up sending Amaya Battle to the free-throw line with a chance to bump the lead to 10 points and finally seal the victory.

Bueckers, standing near midcourt, threw a fist jubilantly in the air and let out a scream, a combination of relief and joy.

Bueckers laughed when remembering her celebration.

"My emotions definitely got the best of me,” she said. “I was just super-excited. I didn’t want to lose my last game at home.”

The victory for the Royals (28-0) was their 60th in a row, the third-longest streak in Minnesota girls’ basketball history.

But Wayzata put perhaps the biggest scare of the season into the Royals.

Trojans center Annika Stewart scored inside and out en route to a team-high 27 points. Sophomore guard Mara Braun handled the Hopkins pressure like a seasoned vet, never letting the Royals ramp up one of their trademark runs. The Trojans led 32-30 late in the first half and stayed within three to five points for much of the second half, but they never could quite pull even.

“They battled. They were prepared,” Cosgriff said. “They threw stuff at us and we answered. That was a typical Hopkins/Wayzata game.”

Wayzata coach Mike Schumacher said his team played about as well as it could play.

“We went nose-to-nose with a pretty darn good team and I thought we held our own,” Schumacher said. “I wouldn’t say we ran out of steam, they just made a few more shots than we did.”

Bueckers, who had a game-high 33 points, said she expected nothing less than they got from Wayzata.

“Hopkins/Wayzata is like Duke/Carolina,” Bueckers said. “And to get to state, that puts more pressure on both teams. The crowd was enormous and just the atmosphere was really fun.”

Among those in the sellout crowd of more than 2,000 with Timberwolves players Karl-Anthony Towns, D'Angelo Russell, Josh Okogie and James Johnson.

“That was cool,” Bueckers said. “I got told before the game they would be here and for them to actually show up was pretty cool.”

Hopkins withstood the best Wayzata had to offer and still managed to pull away for an 86-76 victory in the Class 4A, Section 6 championship game.

Paige Bueckers, playing in a packed Lindbergh Center in her final home game at Hopkins, scored 33 points for the Royals. Annika Stewart led Wayzata (24-5) with 27 points.