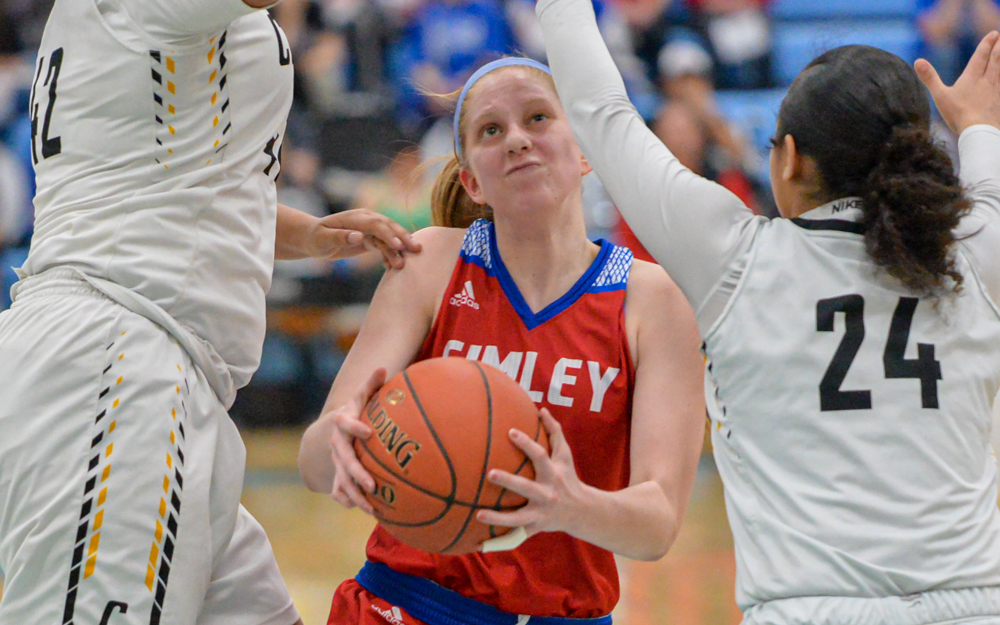 Simley’s Sydney Stensgard (center) had 29 points on the night as the Spartans went on to defeat the Cougars 69-53 Thursday night in the Class 3A, Section 3 final. Photo by Earl J. Ebensteiner, SportsEngine

A rough-and-tumble affair between the top-seeded Simley Spartans (27-2) and the No. 3-seed St. Paul Como Park Cougars in the Class 3A, Section 3 finals at Bloomington Jefferson High School Thursday ended with the Spartans pulling away late for a 69-53 victory.

“We did a good job of going inside and out,” Simley head coach Mark Stensgard said. “We got some good shots outside and got good inside touches that expanded the lead.”

Fouls came early and often, and the tight play on both ends of the court was something the Spartans had to adjust to throughout the game.

“We always play better when we get up right away,” Sydney Stensgard said. “It helps us keep going for the rest of the game.” 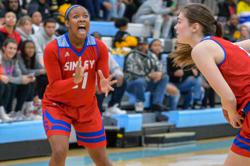 While the Como Park offense took a while to get going, their defense started stepping up and forcing some mistakes. Simley had a hard time fighting off the Cougars at times, and it allowed Como Park to gradually close the gap throughout the first half.

A key possession came in the final six seconds of the first half. After a timeout by Como Park allowed the Cougars to draw up a play, the Spartans locked down and didn’t allow a shot to end the half to take a 37-32 lead into halftime.

“We did a good job of denying what we thought the play was going for after their substitution,” Coach Stensgard said. “The lead at the half kept us going because we knew we were in for a battle and I think we did a good job of handling it in the second half.”

The fouls that both teams racked up in the first half played more and more of a role as the second half went along, with both teams having to sub players in and out to manage the foul trouble some of their best players found themselves in.

“We couldn’t play as physically as we wanted to,” Sydney Stensgard said. “Once we adjusted to it, we were able to work around it.”

Three players between the two teams fouled out in the final few minutes, which was a testament to how tightly the teams were playing throughout the second half.

“It hurt losing Ti-Ti [Tiwaah Danso],” Acheampomaa Danso said of her sister fouling out late in the game. “Everyone came together and we put more effort into keeping our defense straight-up.”

It was a technical foul assessed to Como Park head coach Alexis Gray-Lawson that all but sealed Simley’s victory. Coming with 2:44 left and with Simley at the free-throw line leading by 10, 63-53, the technical foul added two extra free throws and made it a 13-point game, 66-53, when all the free throws were finished.

“It gave us a chance to slow down and talk to each other,” Danso said. “We made sure that we could figure things out and burn the clock out.”

Tough defense by Como Park over the final two minutes of play forced a number of jump balls that kept possession moving between the two teams quickly, but the Cougars simply couldn’t find enough shots to make a comeback.

“I’m so excited,” Sydney Stensgard said. “I’ve been dreaming about this since I was a kid.”

Sophomore guards Ronnie Porter (13 points) and Kaylynn Asberry (20 points) were the leading scorers for Como Park. Stensgard finished with 29 points, and Danso turned in an impressive double-double with 14 points and 17 rebounds.

Having missed the state tournament by one point two years ago, Coach Stensgard is ready to prepare his team for state.

“We were here two years ago and we lost by one,” Stensgard said. “We knew this would be a special year but this tops it off for sure.” 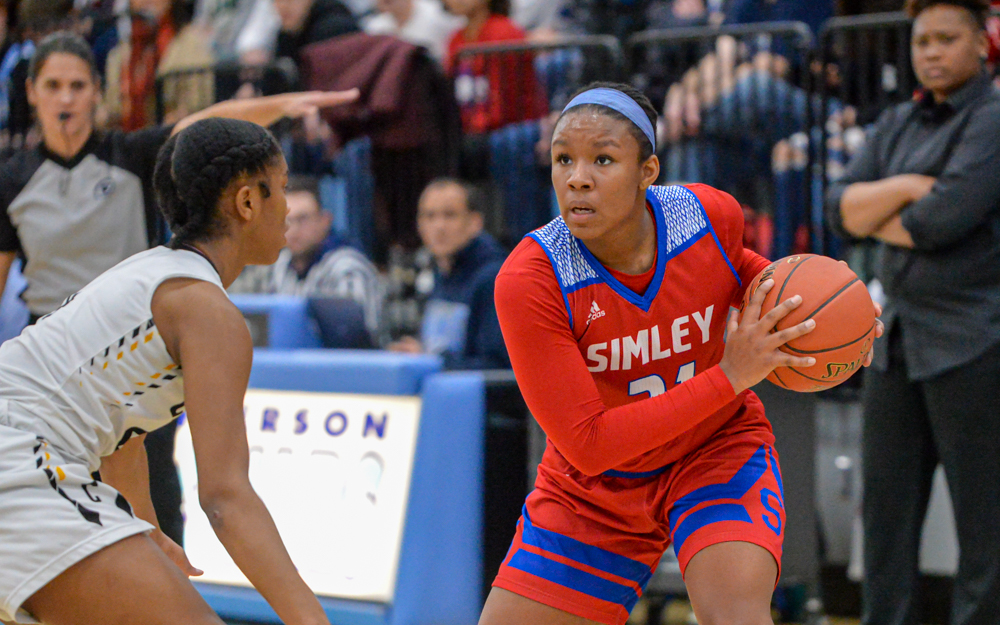 The Spartans' Ysareia Chèvre looks to the lane Thursday night at Bloomington Jefferson High School in the Class 3A, Section 3 final. The Spartans defeated the Cougars 69-53 to advance to the state tourney. Photo by Earl J. Ebensteiner, SportsEngine

Behind a 29-point performance by senior guard Sydney Stensgard, Simley (27-2) advanced to next week’s state tournament with a 69-53 win against St. Paul Como Park (21-5) in the Class 3A, Section 3 final at Bloomington Jefferson High School Thursday evening.

Scoring the first seven points of the game gave the No. 1-seeded Spartans the lead, and they never let it go. The Cougars closed to within five points at various times in the game but were never able to pull ahead.

Stensgard dealt with foul trouble in the second half, and sophomore forward Acheampomaa Danso picked up the slack on both ends of the court, finishing with a 14-point, 17-rebound double-double.

Simley now awaits their seed and assignment in next week’s state tournament. 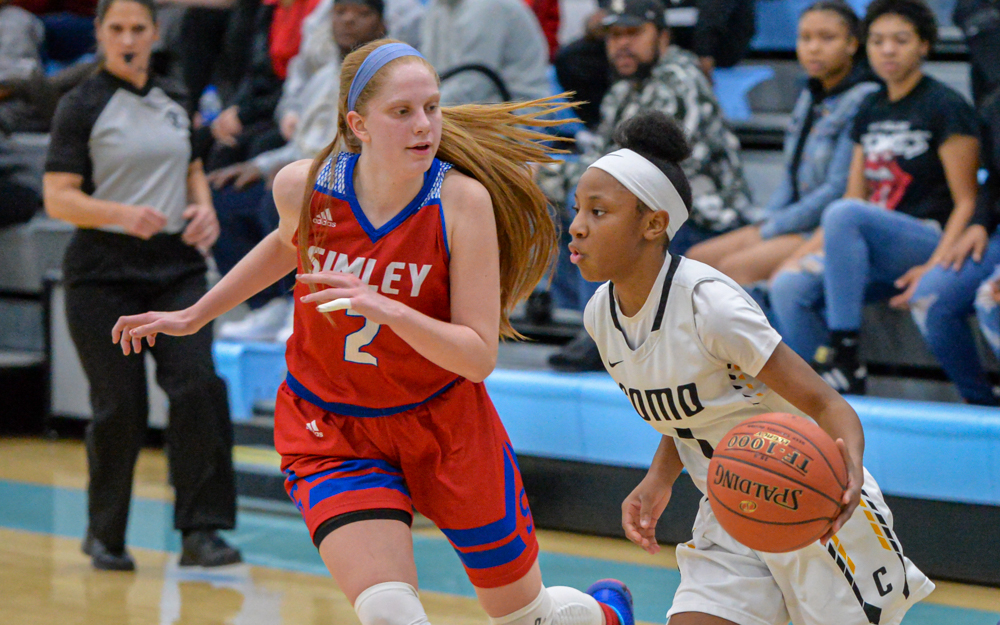 The Cougars' Ronnie Porter (right) was kept to just 13 points Thursday night in the Cougars' 69-53 loss to the Spartans. Photo by Earl J. Ebensteiner, SportsEngine