The Ponies fended off a late Rangers run, and got 27 points from senior forward Liza Karlen. 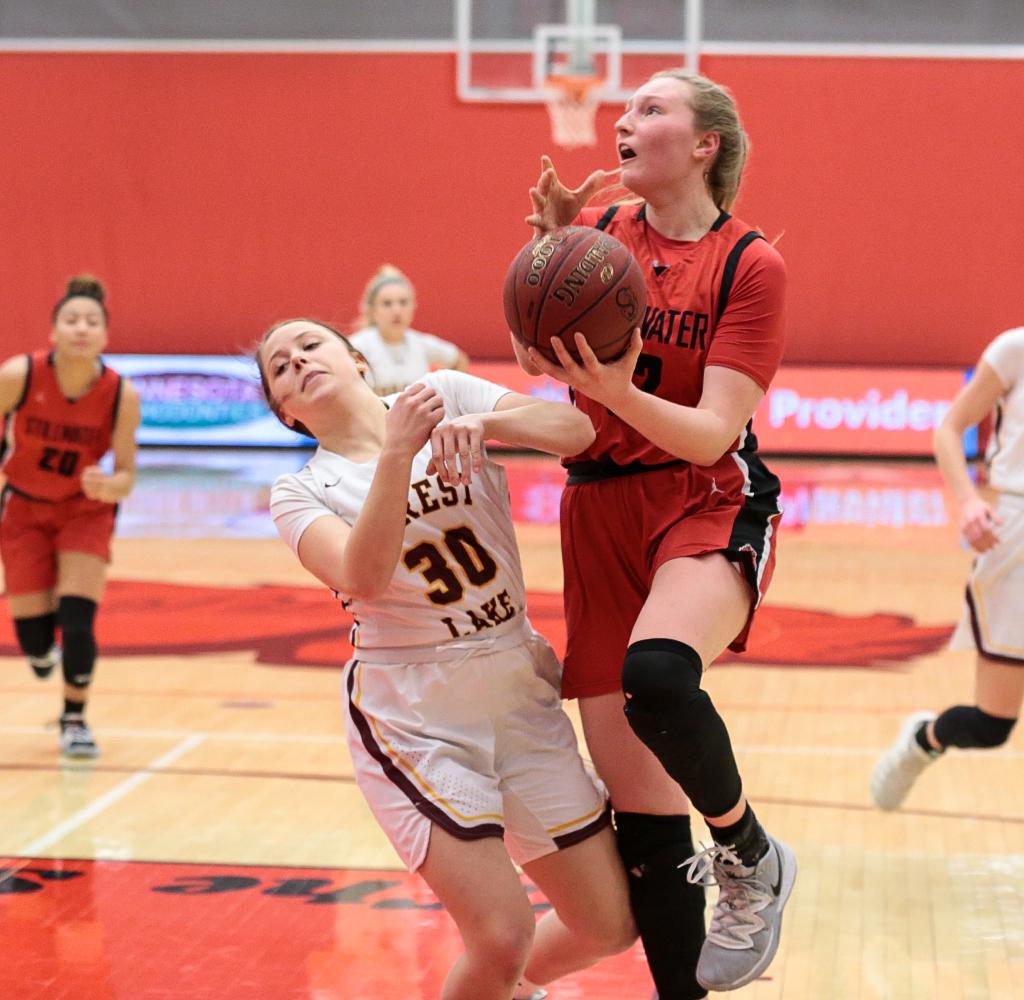 Stillwater's Liza Karlen (32) drives the lane through defender Lydia Bostrom (30). Karlen led all scoring with 27 points, helping the Ponies come back from an early first half deficit to defeat the Rangers 70-57. Photo by Cheryl A. Myers,

The Stillwater girls’ basketball team has had an easy time in the Suburban East Conference this season. But Friday’s contest with Forest Lake (18-8, 12-6) proved to be a test for the Ponies, ranked No. 8 in Class 4A by Minnesota Basketball News. Senior night can disrupt the rhythm and routine a team has taking the court. However, It was senior forward Liza Karlen who was a stabilizing force in Stillwater’s 70-57 victory over the Rangers.

Karlen eclipsed her 2,000th career point total this season, and was named the recipient of the Athena Award which is given to the best female athlete in the school. The award is a testament to how much she has meant to Stillwater sports in her short time at the school.

“I definitely wasn't expecting it, especially as a transfer, but I guess I’m just really lucky and super thankful for the opportunity just to win it,” Karlen said. “There’s really good athletes in this school, so to win it over them means a lot to me.”

Karlen transferred from St. Paul Central in the 2018-19 season. The senior said a lot of people assume she made the switch for athletics. They are wrong.

The balance of school and athletics wasn’t to her liking in the city schools. She thought about a couple schools to transfer to, but the connections she had at Stillwater (20-5, 17-1) brought her to the Ponies. 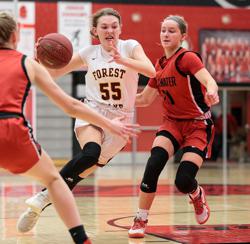 “Coach Taylor coached me for track prior to coming to Stillwater and I played club basketball with Sara Scalia as well, so it’s nice having that chemistry coming in,” Karlen said.

Having those connections with those two made the transfer a lot smoother for her. Karlen’s relationships with them continued to grow which has proven to make her decision to come to Stillwater well worth it.

Head coach Willie Taylor said Karlen has been progressing into more of a leader as the team has needed it.

“Last year we didn’t need that from her as much, but this year she’s been a fantastic leader,” Talor said.

Karlen, who is now in her second season as a captain, said someone had to fill the void.

“Last year our leader was Sara Scalia, so I didn't have to play that leadership role as much,” Karlen said. “It’s important for us to step up. We need the seniors to step up this year if we are going to be successful.”

Junior Alexis Pratt also reached 2,000 career points this season. Taylor is grateful to have so many good players to work with.

“When you got players like that, it makes you a good coach.. they are all capable of scoring at any time, I think it helps a lot,” Taylor said.

Both their milestones excite Karlen and it says more about their squad than its individual parts.

“It shows that our team is super versatile,” Karlen said. “If I’m not scoring we have other scorers on the team as well. It shows our team isn’t based on one person so I think it’s super important.”

The senior scored 27 points in the Ponies’ win on senior night. She was excited to be able to have that type of performance.

Karlen hoped the game would have been easier for her squad for senior night, but she is happy to play hard for her school as Stillwater nears its postseason in hopes of making another run back to the state final.

“It’s important to play hard every game, especially when you only get a limited amount of games at Stillwater,” Karlen said. “So, it’s important to make all of them count.” 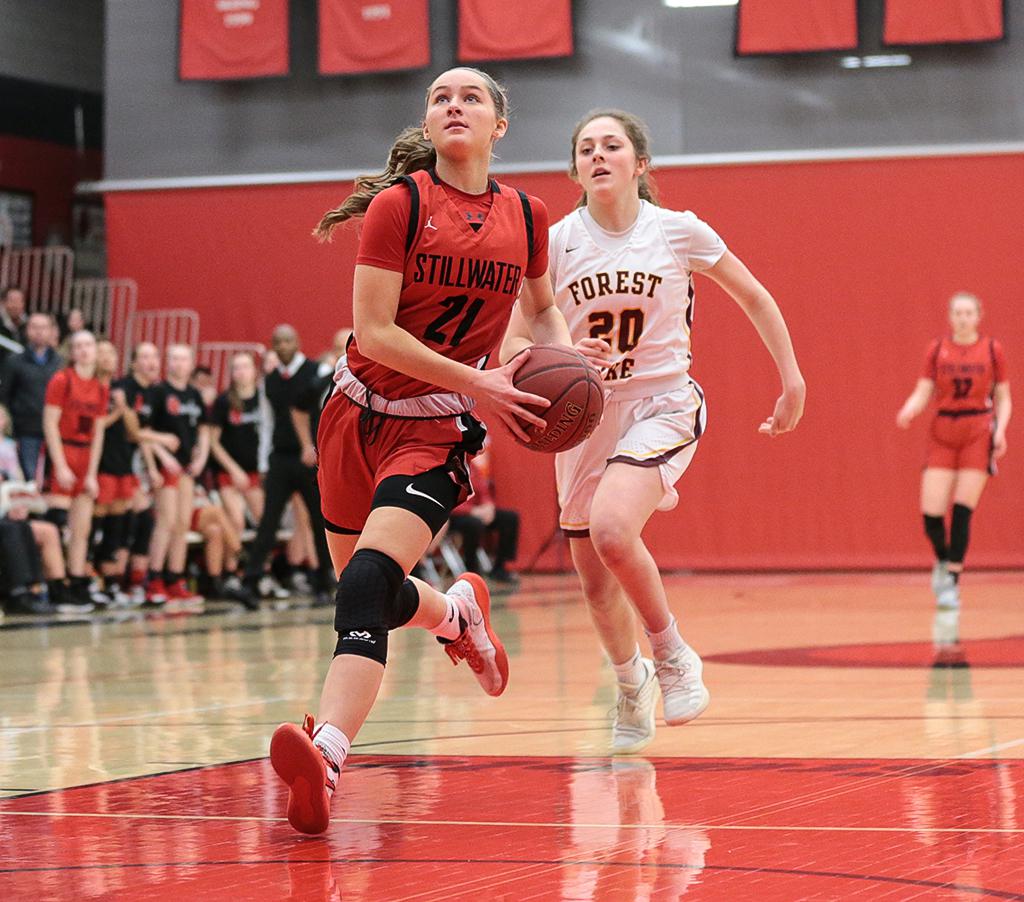 Stillwater's Amber Scalia (21) steals the ball in the first half and takes it down the court for two points. Scalia added 19 points to the Ponies win on Friday night. Photo by Cheryl A. Myers, SportsEngine

After trailing early in the contest, Stillwater, ranked No. 8 in Class 4A by Minnesota Basketball News, stormed back and took command of the game defending its home court in their final regular season game against Forest Lake 70-57 on Friday night.

Forest Lake came out strong behind the play of sophomore guard Greta Krieger who put in 14 of her 18 total points in the first half. Stillwater took the lead at 30-29 and went on to score seven more points to go ahead 37-29 at halftime. Senior forward Liza Karlen led the Ponies in the opening half with 13 points.

In the second half, Karlen added 14 more points to lead the Ponies in scoring with 27 points. The Rangers gave Stillwater a scare in the second half when it stormed back to only trail by single digits. The effort was quickly shut down as the Ponies started getting back into its efficient offense to pull away in the end. 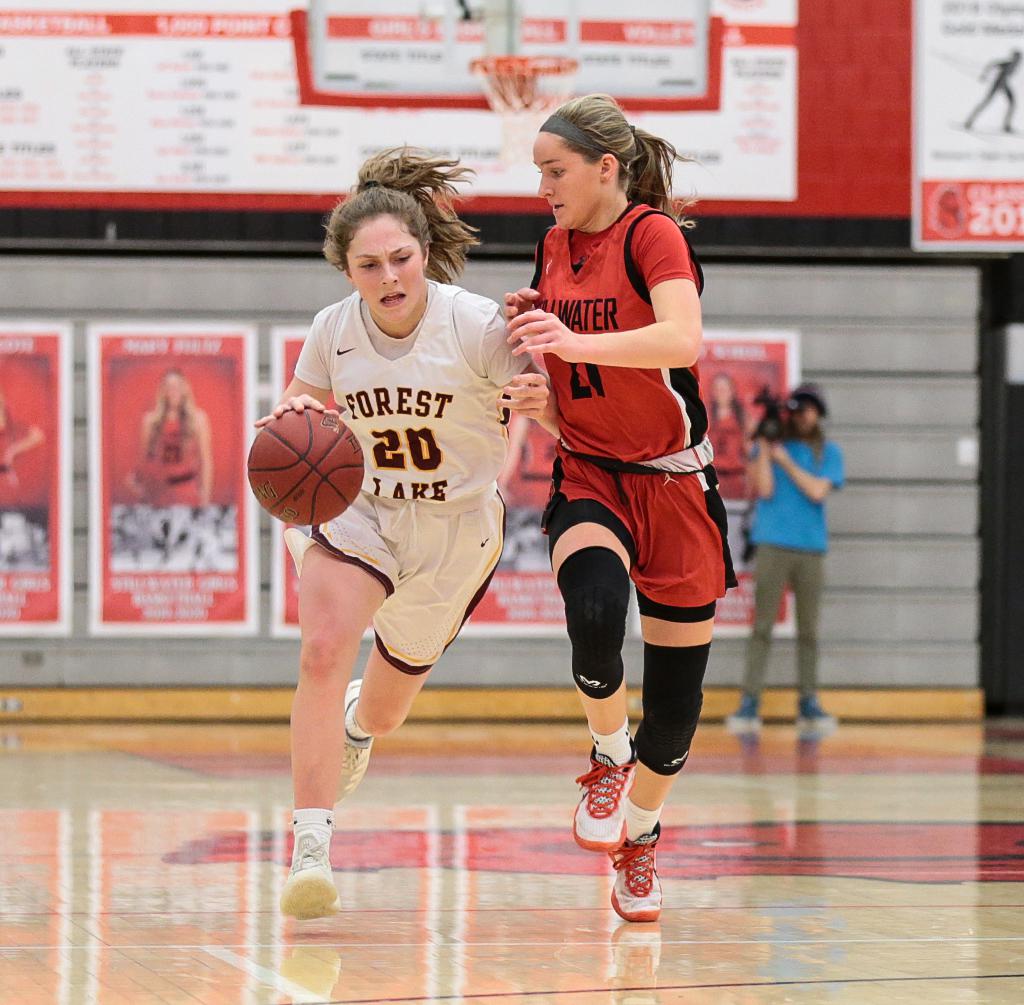