The Crusaders’ balanced scoring attack was relentless with six players in double figures. 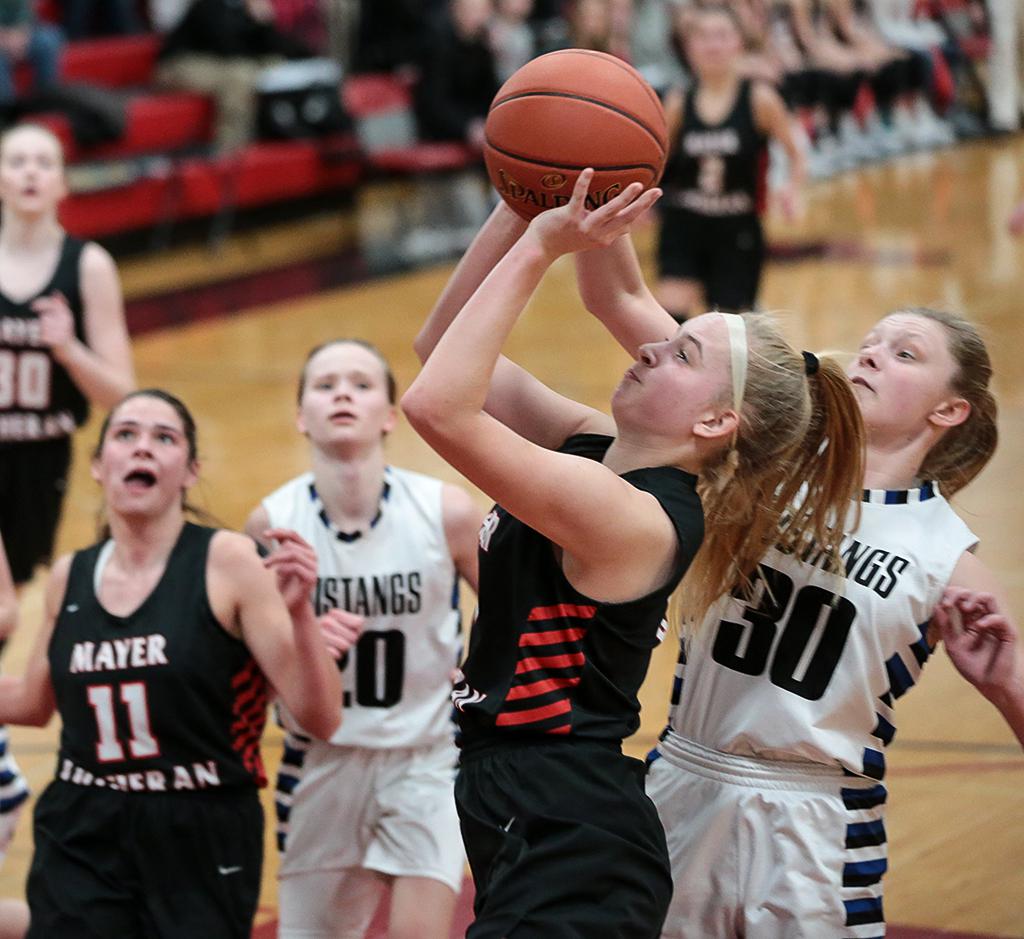 Emma Lade lays the ball up in traffic under the arm of Allison Milbrandt (30). Lade and teammate Morgan Chmielewski led the Crusaders' scoring with 15 points each. Photo by Cheryl A. Myers, SportsEngine

Thursday’s game between Mayer Lutheran and Buffalo Lake-Hector-Stewart was a tale of two teams in different spots in their development.

The Mustangs entered as a young group on the rise. Meanwhile, the Crusaders have worked past those growing pains and have become a team ranked No. 6 in Class 1A by Minnesota Basketball News.

On Thursday, Mayer Lutheran showed the value of an experienced group as the Crusaders rolled to an 83-54 victory in their final home game of the regular season.

Despite losing by 29 points on Thursday, Buffalo Lake-Hector-Stewart (19-6, 11-4) has not been an easy opponent on any front and have improved drastically from a 10-16 record a season ago. 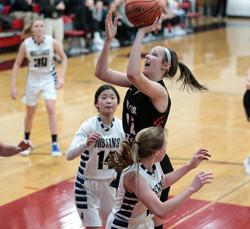 The Mustangs have done this despite having just one senior and one junior on their roster. But with the group improving, coach Dustin Wright had one goal in mind for this game.

“All this game was a chance to see a team that’s better than any team we’ll play this season,” Wright said. “They’re a state tournament-level team and we wanted our younger players to see an experienced group like this one.”

Buffalo Lake-Hector-Stewart did not back down early after falling behind by double digits and fought back to cut the deficit to as few as six points. Mustang sophomore guard Maddy Wulkan played a part in that as she scored a team-best 17 points.

“I thought initially our younger players were frustrated with how athletic (Mayer Lutheran) was,” Wright said. “But I saw our girls starting to figure it out. They have bought in and worked hard and are seeing the results.”

A season ago, Mayer Lutheran (21-5, 10-4) was in a similar position to Buffalo Lake-Hector-Stewart as the Mustangs took their lumps with just one senior on the roster. A year later, the Crusaders are rising up the Class 1A rankings and have now found themselves as the experienced group led by veteran players.

“Last year we slowed it down and took our lumps with a younger group,” Mayer Lutheran coach Kris Gustin said. “This year, we’ve made that great leap in maturity and have really stepped up while also playing fast. It’s something the girls love.”

Aside from being experienced and fast, the Mustangs also have a group of players who can score but also want to see their teammates succeed. That was evident on Thursday as they had six players in double figures.

“We all just have the mentality to push the ball,” said senior guard Lexi Schermann, who had 10 points in the win. “We all want to score, but we’re not afraid to make that extra pass. We’re happy to get that assist or rebound and see our teammate score.”

That unselfishness also moves to the defensive end of the floor and when it comes to rebounding. Mayer Lutheran forced 15 turnovers in the win and had three players with at least six rebounds.

“We’ve talked about that if we can defend in the half court, we can run,” Gustin said. “When we can defend well and finish off the possession with a rebound, it really boosts our confidence.”

With the regular season winding down, the Crusaders will put their winning formula to the test in the postseason. While a regular season with 20-plus wins is admirable, it’s not the end goal.

“We knew we were going to be good this year,” Gustin said. “So far, we’ve met or even exceeded our goals somewhat. We feel like we’re where we expected to be but not where we want to finish.” 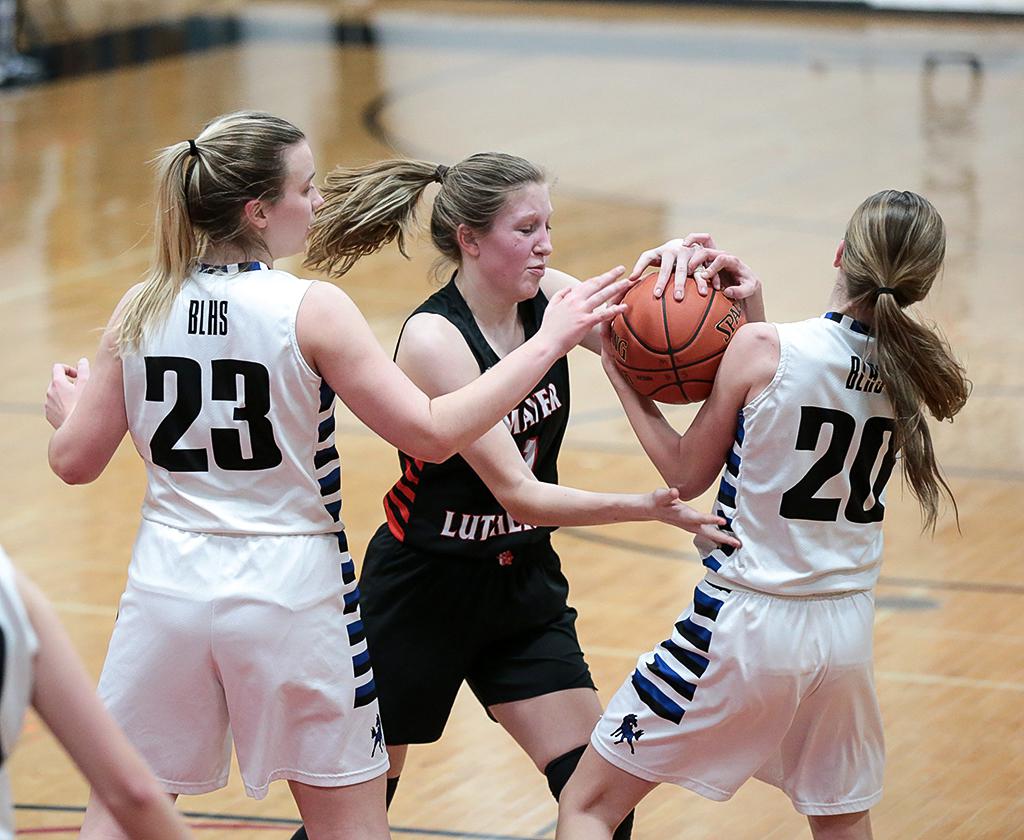 Mayer Lutheran's Paige Stahlke (1) fights for the loose ball with Sara Kottke (23) and Kristi Kottke (20). The Crusaders cruised past the Mustangs 83-54 at Mayer Lutheran High School. Photo by Cheryl A. Myers, SportsEngine

Mayer Lutheran capped off its home schedule on Thursday in a big way. The Crusaders relied on a group effort on both ends of the floor and cruised to victory as they bested Buffalo Lake-Hector-Stewart 83-54 at Mayer Lutheran High School.

In the first half, Mayer Lutheran senior guard Brooke Paulsrud led the way with 10 points for the Crusaders, ranked No. 6 in Class 1A by Minnesota Basketball News.

In the second half, senior guard Paige Stahlke found herself as the leading scorer with nine points.

Guards Morgan Chmielewski and Emma Lade were consistent offensive threats in both halves as they each had a team-high 15 points. Sophomore forward Julia Carns and senior guard Lexi Schermann were the other two Mayer Lutheran players in double figures.

The Mustangs (19-6, 11-4) had trouble keeping up with the high-powered Crusaders. Buffalo Lake-Hector-Stewart’s best answer was sophomore guard Maddy Wulkan, who was the lone Mustang in double figures with 17 points. 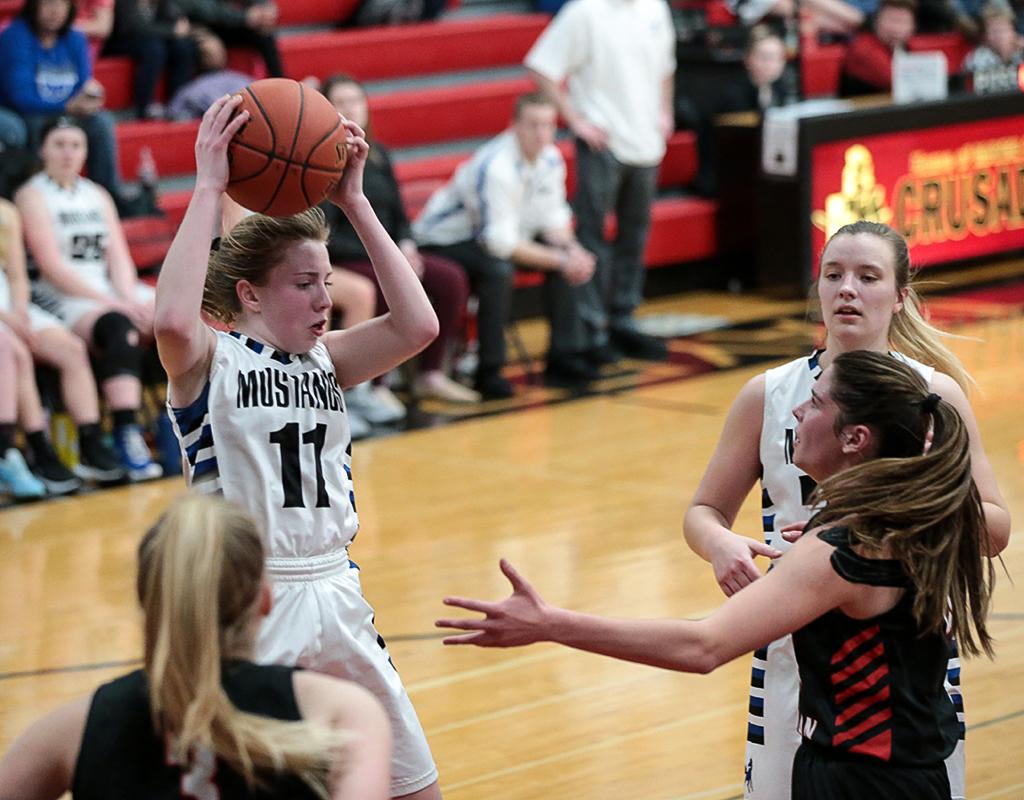 Buffalo Lake-Hector-Stewart's Maddy Wulkan (11) pulls down a rebound in the first half. Wulkan led all scoring with 17 points on Thursday night. Photo by Cheryl A. Myers, SportsEngine