Bears seventh-grader Addison Mack scored 23 of her game-high 29 points in the first half. 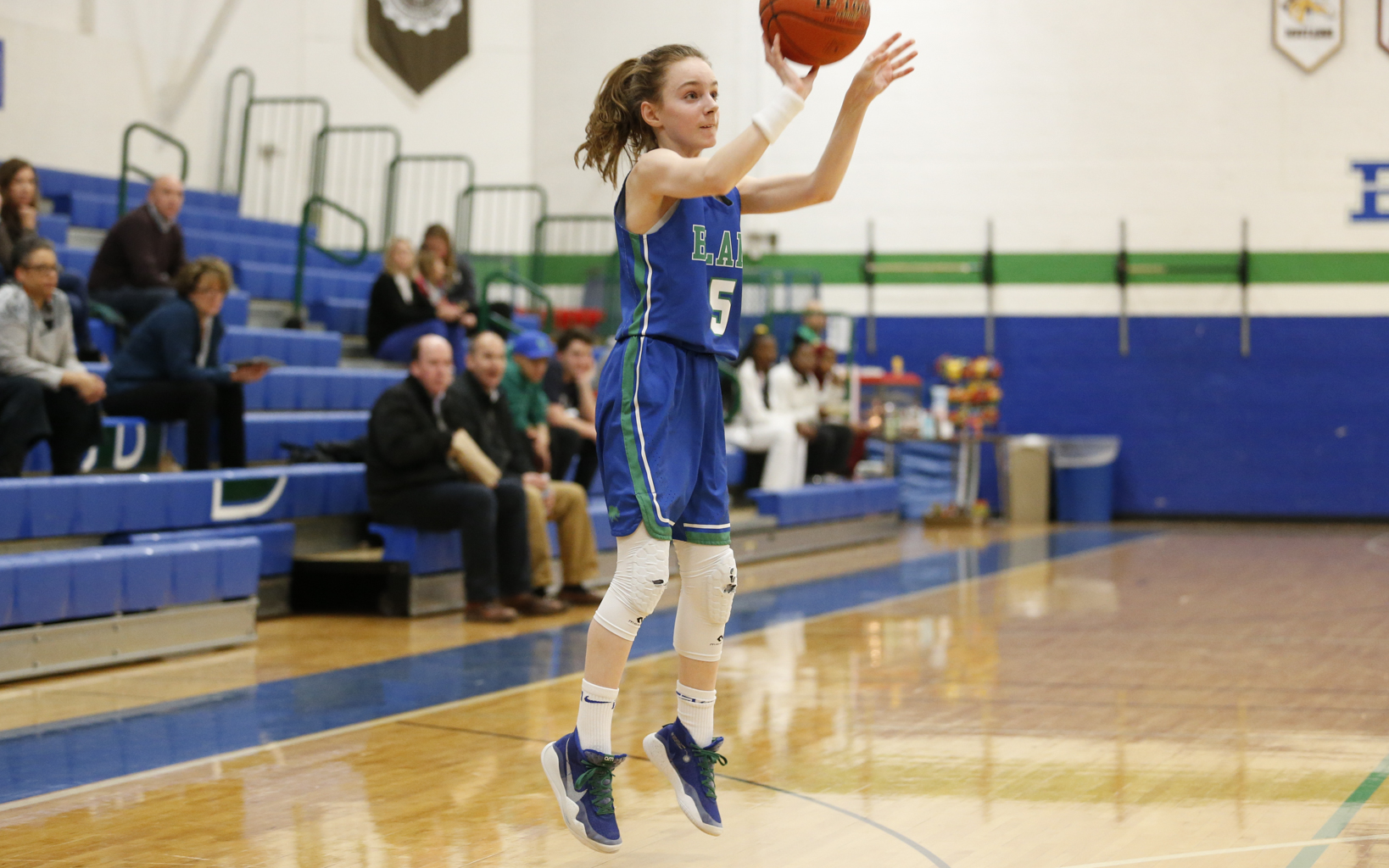 Blake seventh-grader Addison Mack (5) launches a three-pointer as part of her 23-point first half against St. Paul Academy Thursday night. Mack finished with a team-high 29 points in the Bears’ 68-39 victory in Hopkins. Photo by Jeff Lawler, SportsEngine

If you looked at every girls’ basketball team across the state, you’d be hard-pressed to find many that are being led in scoring by a seventh-grader. That’s the case for Blake, as it is led by Addison Mack, who coming into Thursday's matchup against St. Paul Academy, was averaging 17.1 points per game.

She surpassed that average with over seven minutes left in the first half of Thursday's tilt, as she finished with a game-high 29 points in a 68-39 win over the Spartans.

“She’s been a hidden treasure that a lot of people in the metro area, and in the state itself, that had no idea who she was,” said Blake coach Jim DeSart. “(She) plays with the poise and she’s just a basketball machine, plain and simple that’s what it is.”

Mack was out-scoring the Spartans for the majority of the game, as she had 23 points at halftime compared to the Spartans’ 16. She was taken out pretty early in the second half, so she had to settle for 29 points, four shy of her season-high.

The Spartans (10-11, 1-5) used a 2-3 zone and man-to-man defense to try and slow down Mack and the Blake offense, but there was no answer. Mack found space in either scenario for open shots, and she said she’s comfortable against both types of defenses.

“I don’t think it really matters,” she said when asked what type of defense is harder to score against. “I do like it when they’re in man because I feel like I can use my dribble more to drive and kick out to my teammates to get an open shot.”

Mack was the star of the game, but the Bears (13-8, 6-4) have a three-guard starting lineup that features Rachel Winkey and Cate Moe alongside Mack, and the three of them were clicking on all cylinders.

Winkey had three points, three steals and a game-high seven assists. That puts her season assist total up to 125, which is the third-most in the state.

“We don’t need all three scoring 20 points, and Rachel has definitely embraced the role of distributing the basketball and it’s been one of those players that, it’s been impressive to be quite honest with you, because it’s not a fancy number for the papers, everyone looks at the points and not at the assists,” DeSart said.

Moe added eight points, two rebounds, two assists and a game-high five steals, as she was a menace for the Spartans all game.

“It’s really fun to play with two other guards because you can share the ball and you always know that there’s an opportunity to get a shot or create for someone else,” Mack said. “I think the chemistry is working really well for the three of us.”

While this was a tough game for the Spartans, they did get a great performance from Pilar Saavedra-Weis, who fought the entire game and was constantly battling in the paint. She finished leading her team in points and rebounds, getting a double-double of 12 points and 14 rebounds. 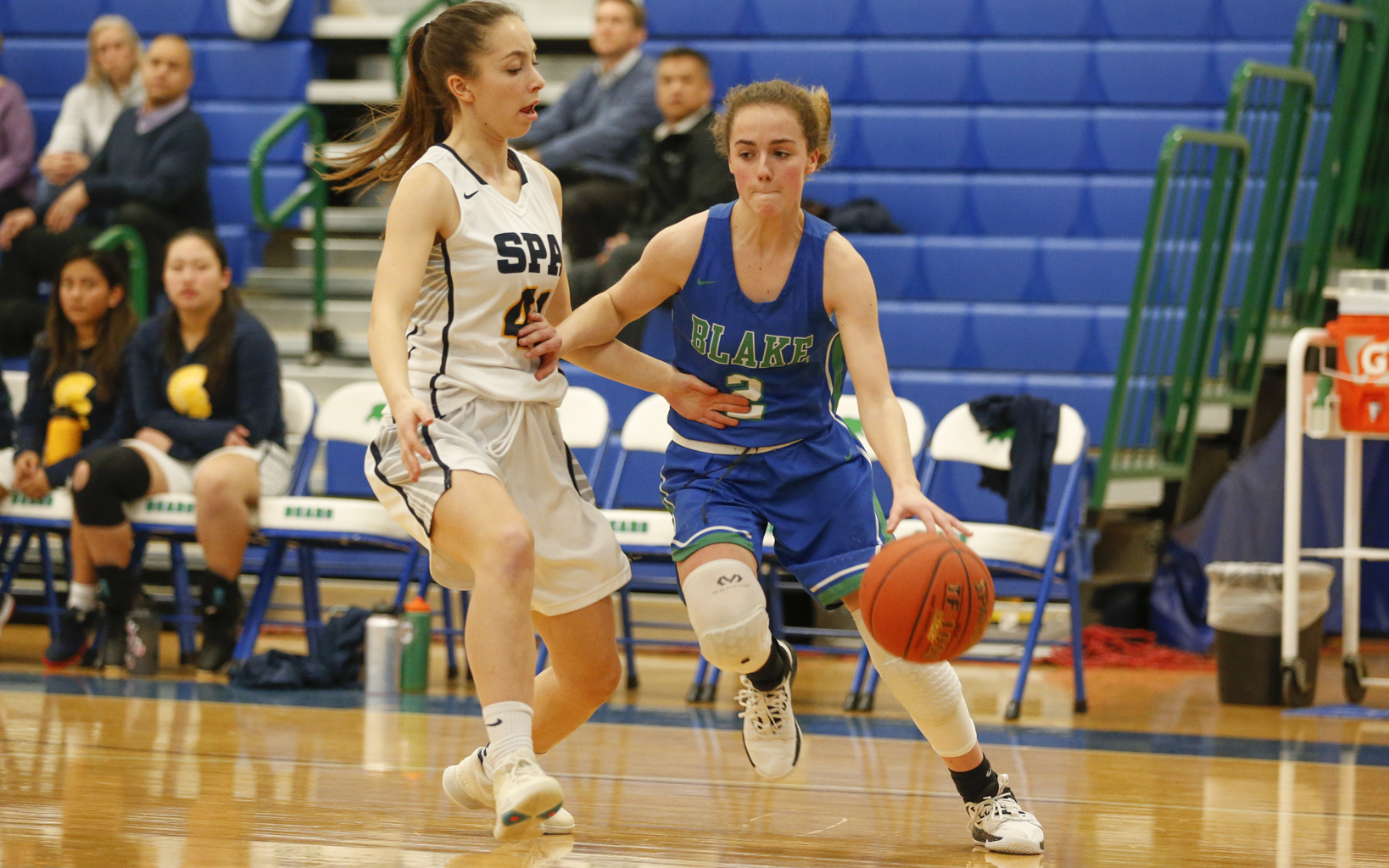 Blake's Rachel Winkey (2) looks for room along the baseline as St. Paul Academy's Julia Baron (41) defends. Winkey had three points and seven assists in the Bears’ 68-39 victory over the Spartans. Photo by Jeff Lawler, SportsEngine

Blake had no trouble taking down fellow Independent Metro Athletic Conference foe St. Paul Academy Thursday night, as the Bears came away with a comfortable 68-39 victory at home.

From there on out, the game was dominated by Addison Mack, who scored 23 of her game-high 29 points in the first half.

The Spartans battled and were able to outscore the Bears 23-21 in the second half, as Pilar Saavedra-Weis was everywhere. She led the Spartans in points with 12 and rebounds with 14.

The Bears were headlined by Mack’s high-volume scoring, but they got contributions from plenty of players. Rachel Winkey found open teammates all game, as she finished with a game-high seven assists. Cate Moe was a menace on the defensive end with a game-high five steals and she added eight points. Catherine Hardy, Cheryl Minde and Morgan Ramsey were the glass cleaners, combining for 23 rebounds. 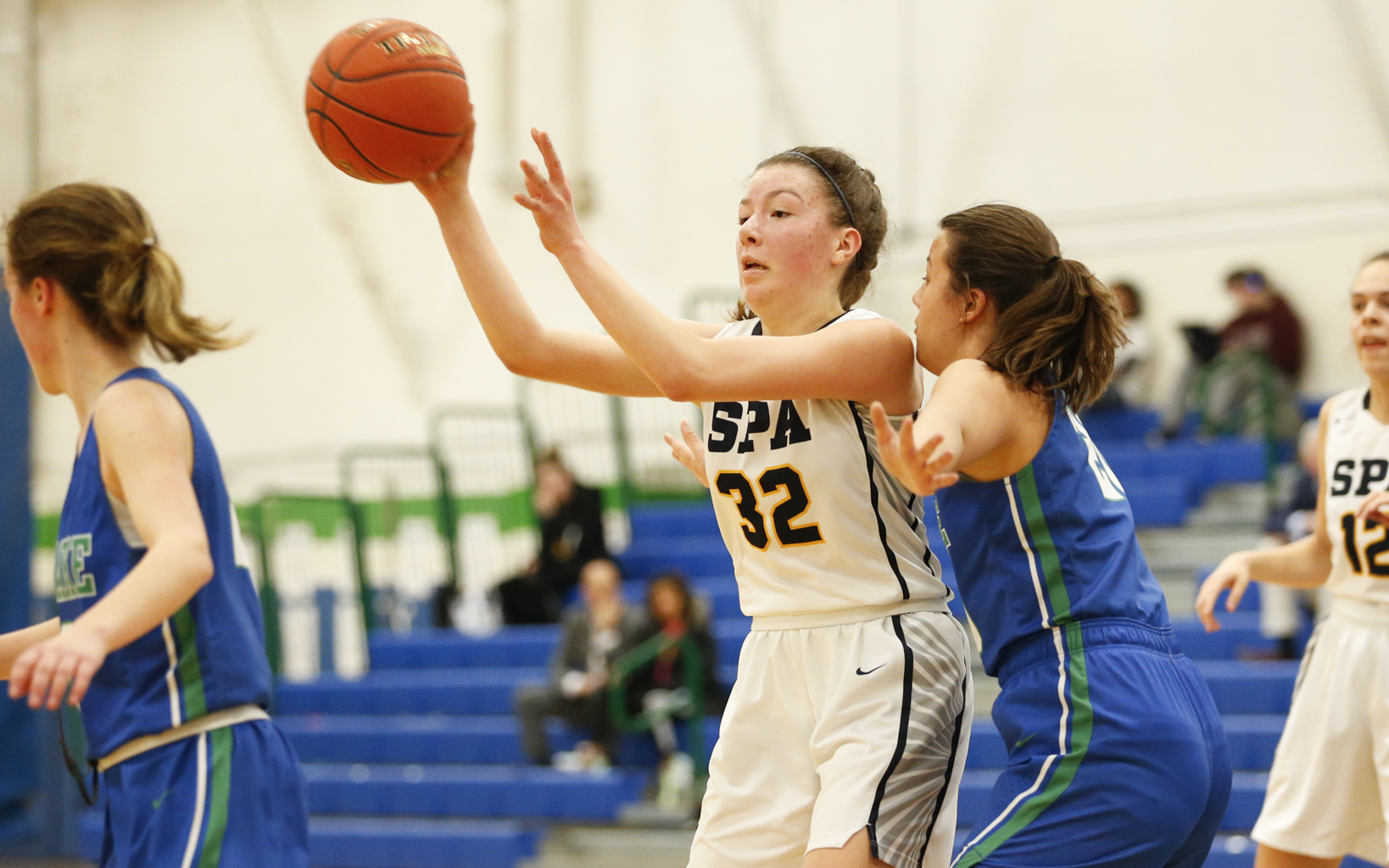 St. Paul Academy's Pilar Saavedra-Weis (32) passes the ball outside after pulling down a rebound against Blake Thursday night. Saavedra-Weis had 12 points and 14 rebounds in the Spartans 68-39 loss to the Bears. Photo by Jeff Lawler, SportsEngine