The Crimson outscored the Huskies 18-3 in the final nine minutes of the game. 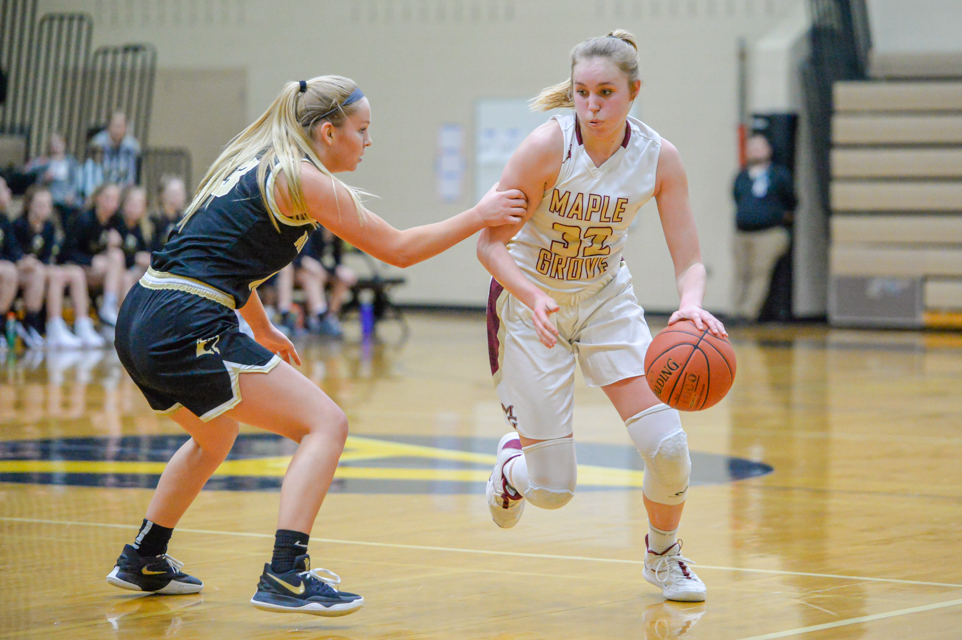 The Crimson’s Jordyn Lamker (32) had a team high 21 points in Maple Grove’s 60-47 win over the Huskie’s Friday night in Andover. Photo by Earl J. Ebensteiner, SportsEngine

Maple Grove coach Mark Cook had a simple assignment for Izzy Brant at halftime of the Crimson's contest at Andover Friday.

"I told Izzy, 'At the end of the game, I want to know what kind of gum Sydney White is chewing,'" he said.

That's because White lit up Maple Grove for 23 points in the first half of a crucial Northwest Suburban-North Conference contest, leading the Huskies to a 12-point lead late in the period.

But the Crimson rallied thanks to Brant, a junior who limited White to just seven points in the second half, and a 15-point second-half outburst from Jordyn Lamker carried Maple Grove to a 60-47 victory.

Lamker, a junior, finished with 21 points to lead Maple Grove, ranked No. 8 in Class 4A by Minnesota Basketball News. Senior Abby Schulte had 17 points while Brant added 12 for the Crimson (16-4, 7-1). Outside of White, the only other player in double figures for Andover (11-8, 5-2) was Alyssa Gerth, who scored 11. 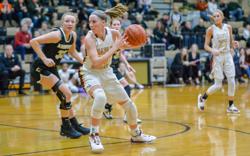 And it was Brant's fine defensive effort on White that keyed the comeback win.

"Izzy Brant was the answer," Cook said. "She did a great job of getting around and getting through screens, and her teammates did a great job communicating when screens were coming so she could react to them. Izzy had an unbelievable defensive performance in the second half, and our whole team did a great job of executing what we wanted them to do."

White was electric in the first half, connecting on back-to-back 3-pointers early and racking up 13 of the Huskies' 16 points as Andover led by eight with 10:21 left in the first half. The senior, who finished with 30 points, helped her team rise to a 29-17 advantage with 3:30 to play in the period.

But Brant made a pair of 3-pointers that sparked a 12-3 run over the final 3:30 of the first half, a rally Cook felt was critical to earning the victory.

"We felt they gave us a right hook right across the chin, and we were still standing," he said. "As the season has gone on, Izzy has really gained a lot of confidence. She can shoot it; the two 3's she hit at the end of the first half were really huge for us."

But Brant's work on White in the second half was impressive. White managed just five free throws until hitting a tough running shot in the lane with roughly a minute to play for her only field goal of the second half.

"I knew it was my responsibility to keep Sydney from scoring," Brant said. "I often get to guard the other team's top player, so I was excited to take the challenge. I stayed with her and face-guarded her — I tried to not let her get the ball."

Meanwhile Maple Grove continued to pound the ball inside to Lamker and Schulte. That strategy paid off eventually, but the Crimson still trailed 42-35 with 12:28 to play in the second half.

"There were some nerves, but we've been behind before," Brant said. "And we've come back from that before. We knew what we needed to do: we just needed to execute."

Over the game's final 12 minutes, Maple Grove outscored the home team 25-5. A 15-2 run gave the Crimson a 50-44 lead with 6:24 to go, and Maple Grove connected on eight of its final 12 free throws to claim the important conference win.

"This win was huge, because Andover is a very good team," Cook said. "You want to play well against good teams; [Andover's] Blake [Nicols] is a good coach, and I knew they would have a good game plan for us. To come on the road, have to battle back, and get a big win in the conference will be great for our confidence moving forward." 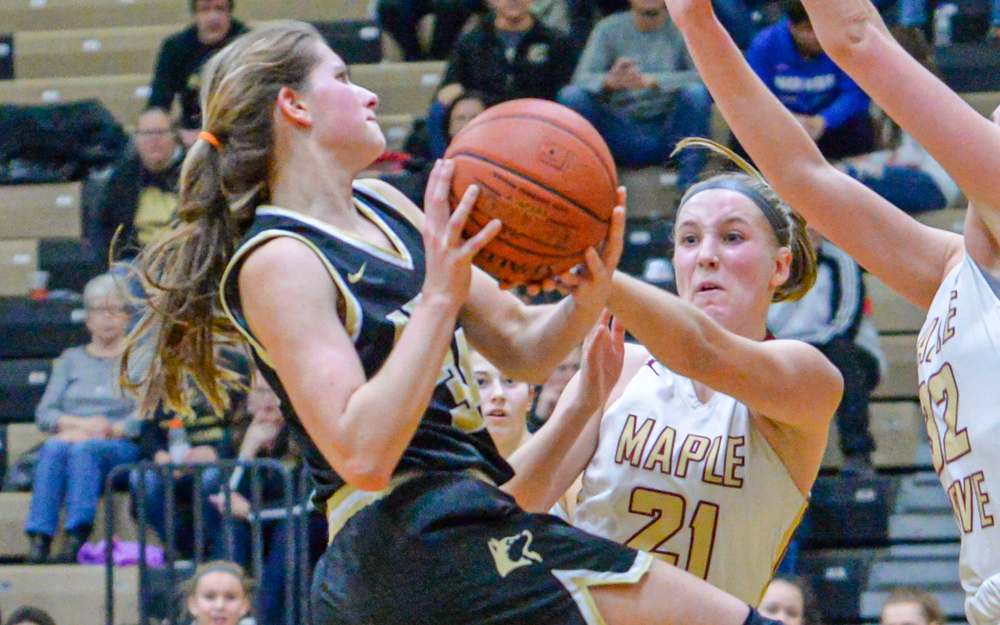 Maple Grove’s Abby Schulte (21) helped hold Andover’s Sydney White to just seven points in the second half after White scored 23 points in the first half in the Crimson’s 60-47 win over the Huskies. Photo by Earl J. Ebensteiner, SportsEngine

Maple Grove strengthened its hold on first place in the Northwest Suburban - North Conference with a 60-47 victory at Andover Friday.

Junior Jordyn Lamker scored 15 of her team-high 21 points in the second half for the Crimson, ranked No. 8 in Class 4A by Minnesota Basketball News.

Senior Abby Schulte had 17 points while junior Izzy Brant added 12 for Maple Grove (16-4, 7-1), which won its fourth in a row and eighth in its last nine contests.

The game remained close until the Crimson scored eight straight points in a three-minute span to lead 50-44. Maple Grove outscored the Huskies 18-3 in the final nine minutes of the game. 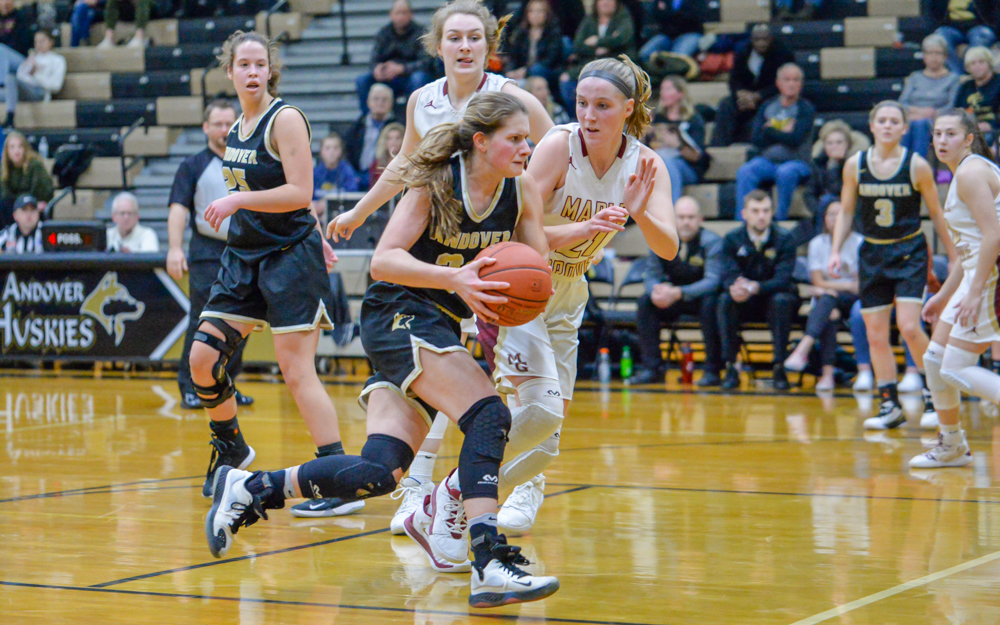 Andover’s Sydney White had a game high 30 points in Friday nights 60-47 loss to the Crimson at home in Andover. Photo by Earl J. Ebensteiner, SportsEngine