The Zephyrs struck late, led by a three-pointer from Julia Salmen with about a minute remaining on the clock, to pull out the victory. 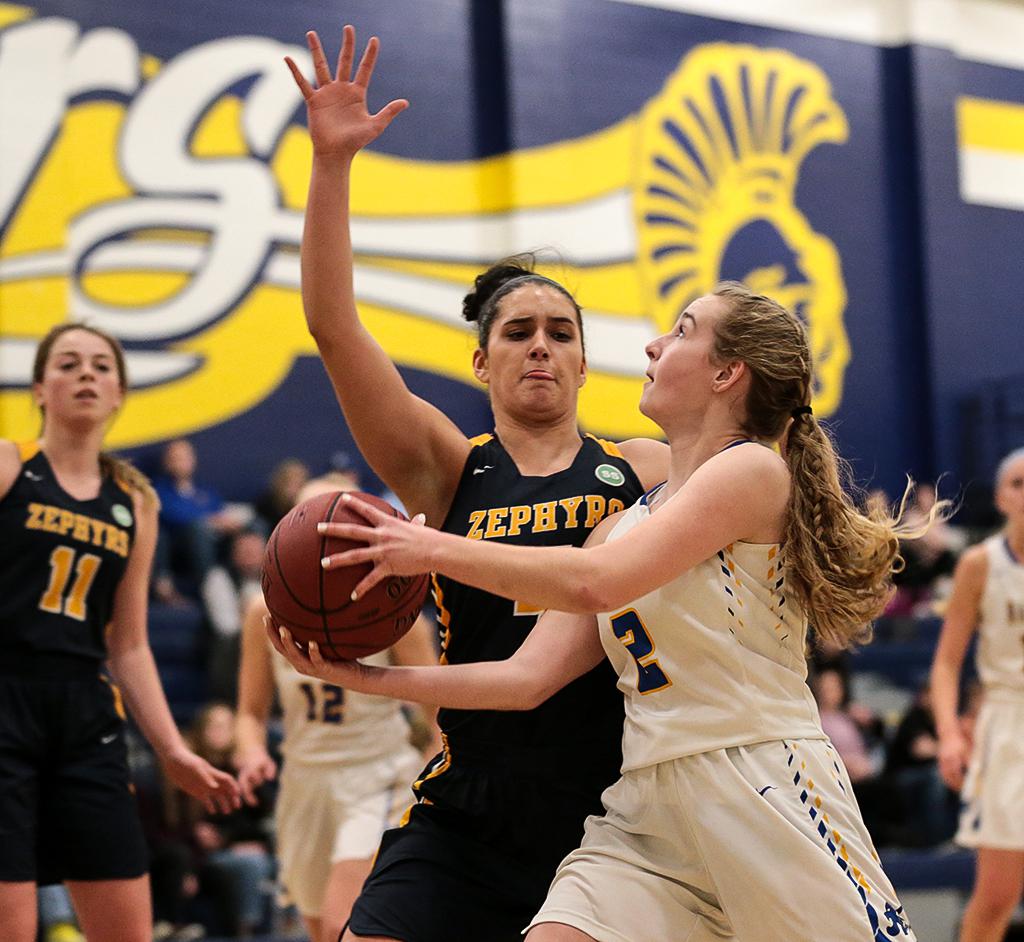 Mahtomedhi's Julia Salmen (4) guards Hastings' Shea Levos (2) in the first half. Salmen's 16 points led the Zephyrs to a 69-68 win in the final minute of the game on Friday night. Photo by Cheryl A. Myers, SportsEngine

Courageous is perhaps the best word to describe the Mahtomedi girls’ basketball team.

Down 14 points in the second half against Hastings, with Raiders star forward Mallory Brake picking apart Mahtomedi’s defense with 35 points scored, it would have been easy for the Zephyrs to look at the obstacle in front of them and fall apart. That, however, is not in Mahtomedi’s DNA.

Mahtomedi (13-3, 4-2) fought back from the deficit and outworked a Raiders (6-11, 2-3) team that had a clear size advantage, allowing the Zephyrs to triumph over the Raiders with a 69-68 Metro East Conference victory at Mahtomedi High School on Friday night.

Julia Salmen, a senior guard who scored 16 points against the Raiders, is the best example of a Mahtomedi player who embodies courage as she’s bounced back from two anterior cruciate ligament (ACL) tears to have a productive season.

She first tore her right ACL, then followed that by tearing her left a year after her first injury. One ACL tear is a big enough hurdle to overcome and two would break the spirit of many young athletes. But Salmen overcame them both. 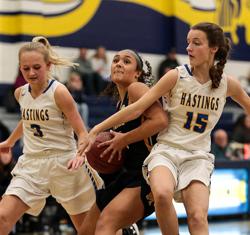 “It was one of the hardest things I’ve ever had to do,” Salmen said. “It definitely took a lot of mental endurance, and I had to work really really hard to come back to get my stamina and my confidence back. After I started playing club and getting back into it, my game started to come back.”

It was difficult for her to sit on the bench, watching her teammates play and knowing she couldn’t be on the court with them.

“I was always just trying to be one of the loudest people on the bench and always be the first one up to give people high fives,” Salmen said. “I tried to never show how sad I was, that I wasn’t playing with my teammates, and just put a smile on my face everytime I sat on that bench.”

The experience working her way back from the injuries influenced her decision to choose Viterbo as her next playing destination after graduation.

“The coach brought me into his office and he asked me 'what motivated you to come back from two ACLs?’ and I actually started crying in his office,” Salmen said.

She talked about how most coaches would be concerned bringing in players with her injury history and that she wouldn’t be seen as someone worth investing in.

“I said that I came back because of God and my strong support system,” Salmen said. “Having a coach that believed in me and was willing to invest in me was a game changer.”

“The girls know what she’s been through, and she’s the one out there fighting for us,” Hergenrader said. “It’s all heart and soul for her.”

Salmen paced the Zephyrs’ offense but she wasn’t alone, as four of her teammates scored nine points or more against Hastings. The boost was essential, as the Raiders packed quite a punch in Brake, who is the state’s No. 3 scorer with 483 points this season, according to stats submitted to the MN Girls’ Basketball Hub.

How the Zephyrs spread the offense was crucial to the team’s success in the second half. Multiple players hit clutch shots late in the game, which made defending difficult for the Raiders since scoring threats were coming from all over the floor.

“What a team win,” Hergenrader said. “That transition — pressure and running — I think was the spark plug that got us back into it.” 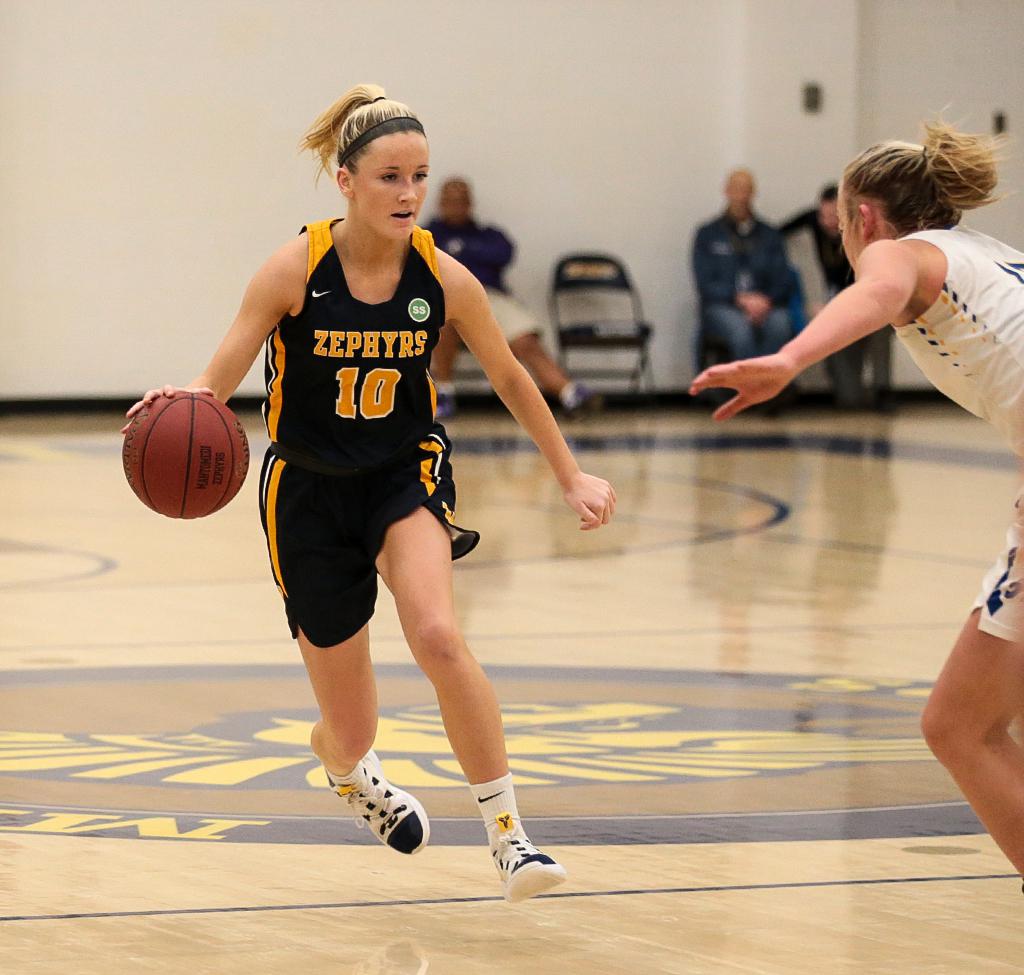 The game came down to the wire with multiple lead changes after Mahtomedi (13-3,4-2) fought back from a 14-point deficit early in the second half. Clutch shots made by multiple Zephyrs late pushed them to the win, including a three-pointer from Julia Salmen with about a minute left on the clock.

Both sides struggled offensively to start the contest. When Hastings (6-11, 2-3) started to find its rhythm it was behind the efforts of Mallory Brake. The senior captain scored 17 of her 35 points in the first half. Lilly Nuytten added 18 points for the Raiders.

Mahtomedi’s scoring was spread across its roster. The Zephyrs were led by Salmen, who recorded 16 points — eight in each half. Ella Hronski finished with 13 points, and teammates Zoie Centers, Zoey Washington and Anna Raney scored nine points apiece for Mahtomedi, which has won three consecutive games. 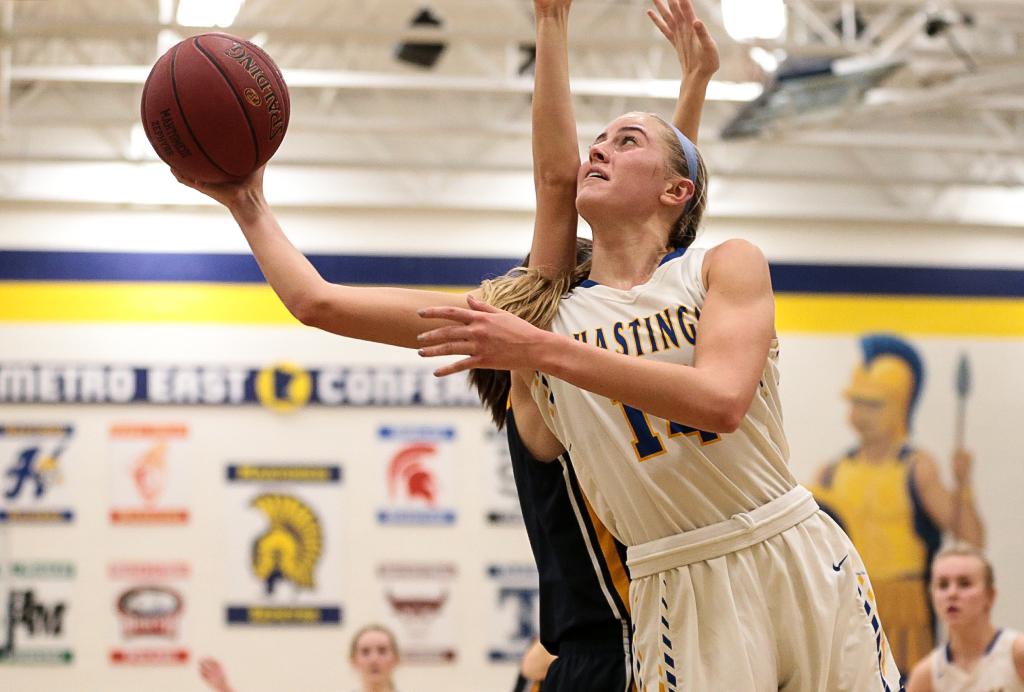 Hastings' Mallory Brake (14) drives the baseline for a layup. Brake led all scoring with 35 points at Mahtomedi High School on Friday night. Photo by Cheryl A. Myers, SportsEngine