The trio of Paige Bueckers, Maya Nnaji and Alayna Contreras helped the Royals defeat the Trojans to secure their 48th straight win. 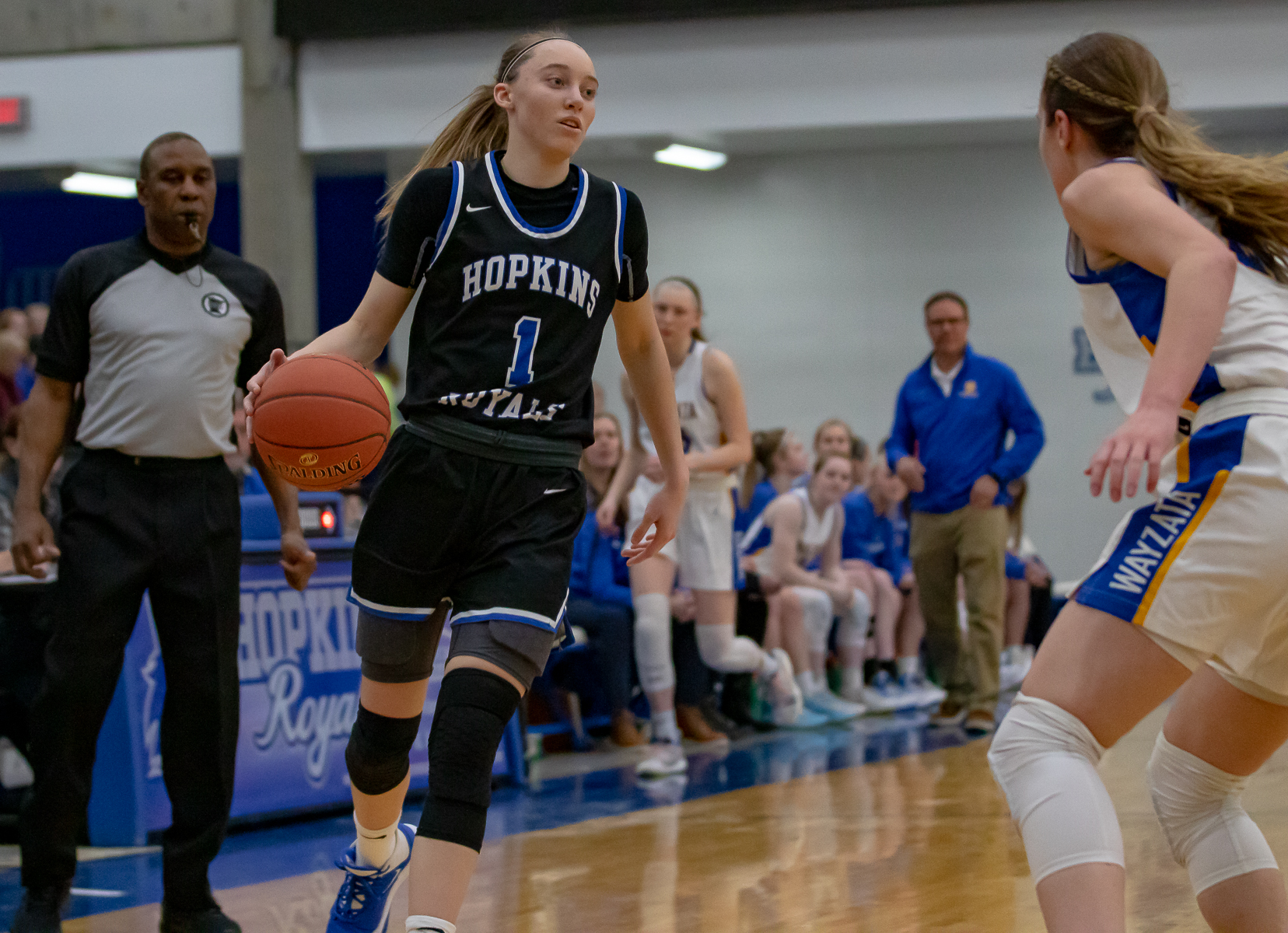 It’s safe to say that Tuesday’s matchup with Wayzata was the closest game Hopkins has played all season.

Outscoring opponents by nearly 40 points per game, the Royals have been dominant all season, continuing their perfect 32-0 campaign from last year that resulted in a Class 4A state championship. However, after tipping off against the Trojans, things seemed different.

Wayzata, ranked No. 2 in Class 4A by Minnesota Basketball News, used scrappy defense and spot passing to stay with No. 1-4A Hopkins. Senior forward Annika Stewart, who’s averaging 15.5 points per game this season, helped Wayzata (14-2, 2-1) claim a 35-32 halftime lead.

Hopkins (16-0, 4-0) responded, however, and opened up an 11-point lead thanks to the play of Alayna Contreras, Maya Nnaji and Paige Bueckers. The Royals held off a late Trojans’ run to secure an 87-77 victory at home, extending their winning streak to 48 games. 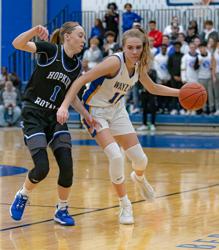 Bueckers, a senior point guard committed to Connecticut, tallied 21 points in the first half while making 8-of-9 baskets in front of none other than her future head coach at UConn, Geno Auriemma.

“She’s unguardable man,” said Nnaji, who starts at forward for the Royals. “If her jump shot is off, then she is going to find the open person. She is really unselfish.”

Bueckers’ jump shot did in fact disappear in the second half, but her passing ability allowed her to find key players such as Nnaji to help finish off Wayzata.

Nnaji, a 6-4 sophomore, was dynamic, scoring 18 of her 22 points in the second half, mostly off beautiful pick-and-roll plays between her and Bueckers.

“I know I can always count on [Nnaji],” said Bueckers, who finished with a team-high 27 points. “I can just give her the ball, and she’ll make something good happen.”

Bueckers stressed how important Nnaji was in the second half to help keep the Royals in the game.

“In the first half I was on fire, but in the second half I couldn’t make a shot, so I relied heavily on her,” Bueckers said, adding that her ability to set good screen and rolls makes it easy for her to record assists.

“We knew if we were going to come back, Maja needed to have a big second half,” said Hopkins coach Brian Cosgriff.

Nnaji finished with a double-double, hauling in 11 rebounds.

Hopkins hit its stride midway through the second half, opening a 56-46 lead after a huge three from Contreras sparked the loudest reaction from the home crowd all night.

Contreras, a sophomore who comes off the bench, has had a quiet season averaging six points a game. But against the Trojans, she had 11 points and her energy off the bench seemed to be the difference maker.

“I have been really hard on her in practice,” Beuckers said. “I want her to be the best player she can be, and I know after a performance like that, that’s the standard I am going to hold her to.”

Contreras hit a pair of three-pointers, and ultimately sealed the game with a steal followed by an open court layup to put the game out of reach.

“She’s flying around on defense, she came off the bench and gave a huge spark that we needed,” Bueckers said.

The Royals won despite the Trojan trio of Stewart, Johnson and Mara Braun. Stewart tallied 22 points and eight rebounds, while Johnson finished with a game-high 28 points and nine rebounds. Braun came on strong late to finish with 22 points.

Although winning 48 straight games is impressive, Cosgriff doesn’t mention the streak and tells his team to take it possession by possession.

Safe to say, that philosophy has worked. 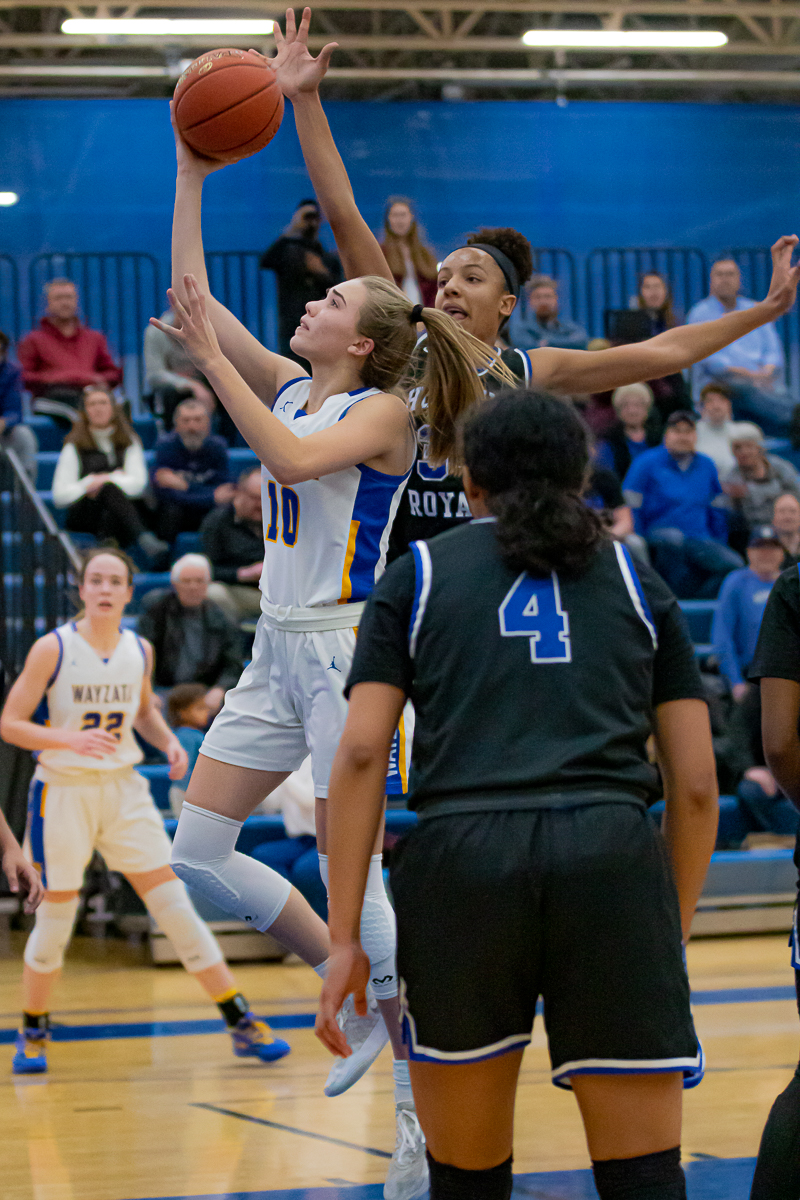 It wasn’t a blowout by 40 points but it was a still a Hopkins win. The Royals, ranked No. 1 in Class 4A by Minnesota Basketball News, slowly pulled away from Lake Conference foe Wayzata in the second half to claim a 87-77 win Tuesday night at Hopkins High School.

It was a gritty start, with both teams trading buckets. Annika Stewart, Wayzata’s star 6-foot-4 senior forward, connected on three three-pointers to close the first half, giving the Trojans a 35-32 lead. Stewart finished with 22 points and eight rebounds.

Hopkins (16-0, 4-0) responded, with Alayna Contreras and Maya Nnaji providing a spark to give the Royals an 11-point lead midway through the second half. Wayzata (14-2, 2-1) made one last push, cutting the deficit to three with 1 minute, 45 seconds remaining, thanks to Mara Braun who scored 22 points.

Nnaji scored a couple buckets late, while Contreras came up with a steal to put the game out of reach. Hopkins’ Paige Bueckers, a senior guard committed to Connecticut, paced the Royals with 27 points. Nnaji finished with 23 points and 11 rebounds. Taylor Woodson added 15 points and Contreras scored 11 for Hopkins.

In addition to contributions from Stewart and Braun, Wayzata got a game-high 28 points from Jenna Johnson, a junior forward. 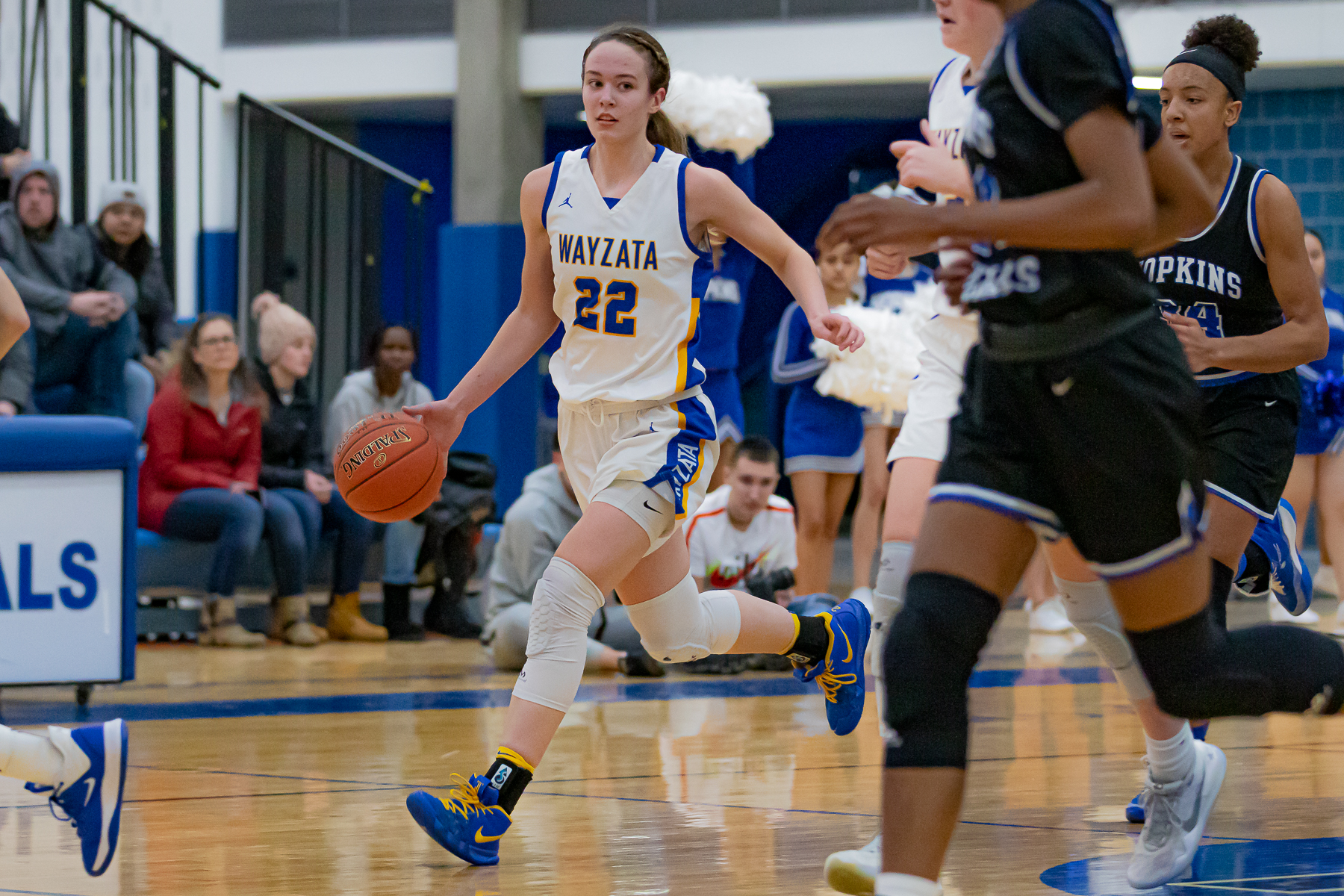 Wayzata junior forward Jenna Johnson (22) brings the ball up the court against Hopkins. Johnson led her team with 28 points but the Trojans fell to the Royals 87-77 on Tuesday night at the Lindbergh Center. Photo by Gary Mukai, SportsEngine